The feeling of love is, deep, soft, satisfying. Because of its affectionate and intimate nature it is viewed by some as an inapplicable topic for experimental research. But, whatever our own perception may be, our assigned mission as psychologists is to analyze all facets of human and animal behavior into their component variables. (scientific American , June 1959) Therefore as far as love or affection is concerned, psychologists have been unsuccessful in this quest. The few things we know about love don’t go beyond simple examination, and the few things we read about it have been written better by poets and novelists.

Don't use plagiarized sources. Get your custom essay on
“ Harlow’s Theory: Love ”
Get custom paper
NEW! smart matching with writer

But of greater worry is the truth that psychologists tend to give way less attention to a impulse which penetrates our entire lives. At least psychologists who write books, not only show no importance in the cause and unfolding of love or affection, but they seem to be blinded of its very existence (scientific American, June 1959 )

In the Wisconsin University lab, Harlow investigated the meaning of love, focusing on the relationships between a baby and its mother.

He started by making it clear that the love between an infant and the mother was more of an emotional feeling rather than something psychological, suporting the adoption-friendly theory that connection of care—“nurture”—was a far more determining factor in healthy psychological development than “nature.” (Harry F. Harlow, 1959) Then he showed how early periods of time are crucial to the capacity of attachment, If the early days or weeks of the infant were lost it would be really hard or even hopeless to compensate for the loss of initial emotional comfort.

The critical period thesis confirmed the idea of assigning infants with adoptive mothers as shortly after being born. Harlow’s Hypothesis gave experimental affirmation for prioritizing psychological over biological motherhood while the advancing risks of adopting babies beyond birth. It normalized and pathologized adoption at the same time. ( Harry F. Harlow, 1959)

In his experiment Harlow detached baby monkeys from their mother’s hours after being born, later arranged the baby animals to be nurtured by two kinds of artificial monkey mothers. The first mother, mainly made out of bare wire mesh was equipped to dispense milk. The other was a wire mother covered with soft terry cloth almost like fur. Harlow’s first examination was that baby monkeys that were given a choice of artificial mothers spent far more time clinging to the terry cloth, even if they didn’t have a milk dispenser. This suggested that infant love was no simple response to the satisfaction of physiological needs. Attachment was not primarily about hunger or thirst. “It could not be reduced to nursing” (Harry F. Harlow 1958)

After the results Harlow made a few more arrangements in his experiment and made yet another important observation. Harlow tried separating the infants into two different variables one group was given only the wired mother while the other was given the mother with the cloth. all the babies drank the same amount of milk and grew at the same rate. Yet the similarities ended at that. The babies who were given a soft, physical contact with their cloth mothers behaved quite differently than babies whose mothers were made out of cold, hard wire. Harlow hypothesized that members of the first group benefitted from a psychological resource—emotional attachment—unavailable to members of the second. By providing reassurance and security to infants, cuddling kept normal development on track. (John Wiley and Sons, 1980)

What could have been the exact reason that made Harlow sure that emotional attachment was a decisive part of developmental differences? Harlow made another observation when he decided to scare the baby monkeys with strange, loud objects like machines that almost looked like monsters hitting drums. The monkeys raised by furry cloth mothers made physical contact with their mothers, brushed against them, and eventually made them feel secure. Harlow theorized that they used their mothers as a “psychological base of operations,” allowing them to remain playful and inquisitive after the initial fright had subsided.( John Wiley and Sons, 1980) On the other hand, babies nurtured by wire mesh mothers did not run to their mothers when scared. Rather, they threw themselves on the floor, clinched themselves, rocked back and forth, and screamed in fear. “These behaviors intimately mimicked the actions of autistic and deprived children often seen in institutions as well as the pathological behavior of adults confined to mental institutions”.( Harry F. Harlow, 1959) The awesome power of attachment and loss over mental health and illness could hardly have been performed more dramatically.

In later experiments, Harlow’s monkeys proved that better late than never was not always right specially when it came to nurturing an infant. When Harlow allocated his baby monkeys in total isolation for the first 8 months of their life, forsaking their contact with other babies or with the artificial mothers, they were permanently hurt. Harlow and his friends kept repeating this experiments, assigning baby monkeys to diffrent periods of isolation times. They came up with the conclusion that the impact of early motherly deprivation could be reversed in monkeys only if it had lasted less than 90 days, and estimated that the equivalent for humans was six months. (Harry F. Harlow, 1959)After these critical periods, no amount of exposure to mothers or peers could change the monkeys’ anomalistic behaviors and make up for the emotional damage that had already happened. When emotional bonds were first established was the key to whether they could be established at all. (scientific American,1959 )

In the following investigations, Harlow showed that baby monkeys could also turn to their cloth artificial mother for peacefulness and protection. Placing them in a weird situation Harlow allowed the baby monkeys to explore a room both in the presence of their artificial mother and in her absence. Monkeys in the presence of their mother would use her as a secure base to explore the room, by running around the room to explore and going back to their mothers for satey. When the artificial mothers were removed from the room, the effects were tremendous. The baby monkeys no longer had their secure base to explore the room and would often freeze up, crouch, rock, scream, and cry. (Harlow, Harry.1958)

Despites Harry Harlow’s work claiming and reinforcing a wealth of research on love, affection, and motherly relationships, his own personal life later started to fall into pieces. After the life threatening illness of his wife, he drowned in alcoholism and depression, eventually becoming separated from his own kids. Friends often described him as sarcastic, thigh-fisted, mercenary, obstinate, and cruel. “Yet Harlow’s enduring legacy reinforced the importance of emotional support, affection, and love in the development of children.” (Williams & Wilkins. 1964)

Harlow’s experiments showed the significance of having a mother or a parent, or even a mechanical mother. The monkeys showed tremendous affection for the artificial mother and it demonstrated how much they needed them. This only leads me to think of the poor abandoned babies whose parents past away or simply left them for adoption and the effect that that is going to cause in their future. I’ve also heard in videos I have seen through my history classes of soilders in WWI. As they were dying the last words that would come out of their mouths would be “mom”. We sometimes forget and take for granted what we have, I’em very lucky to say I always had my mother with me and I em so grateful for that. 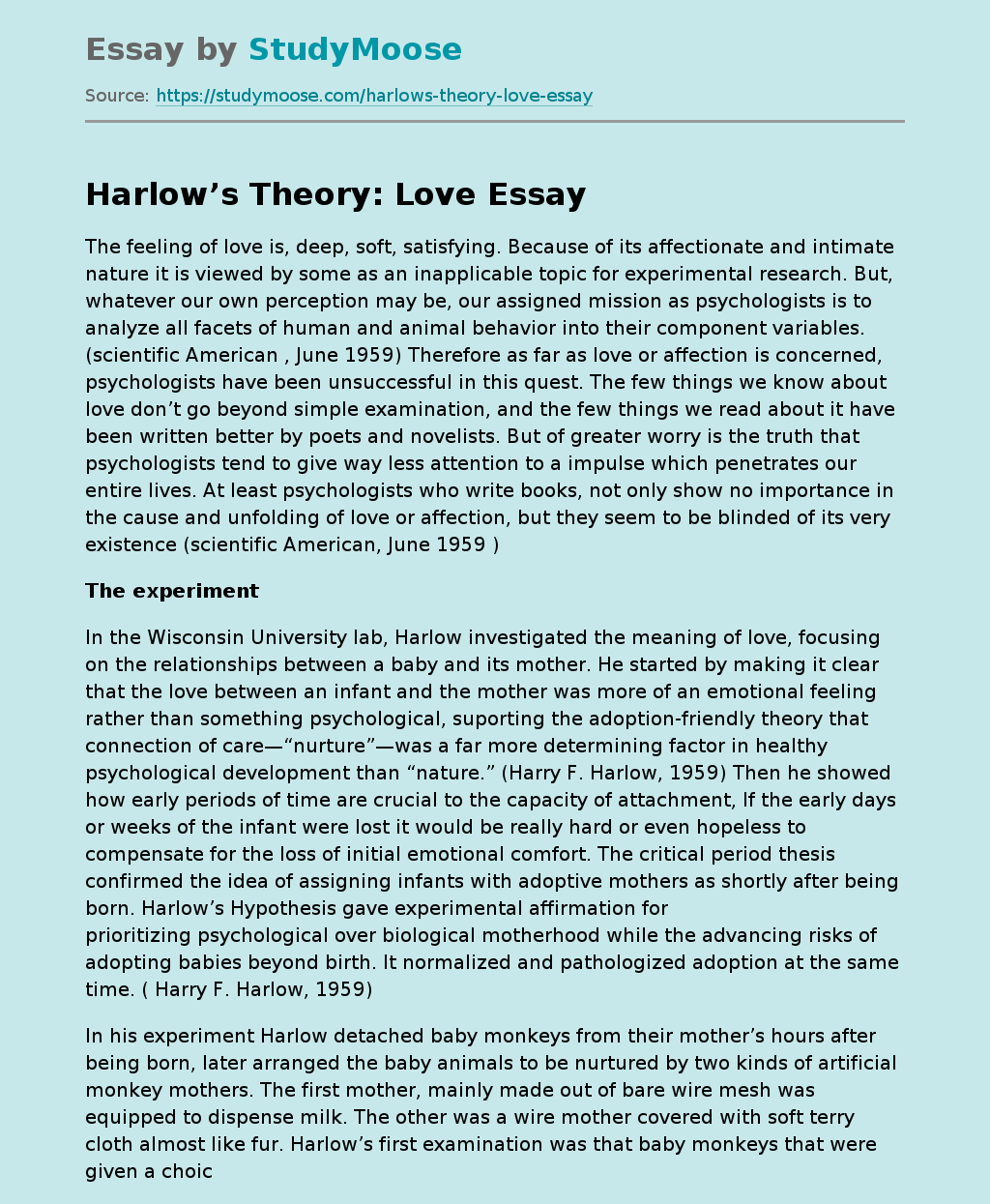