Compare and Contrast the work of Harry Harlow and Mary Ainsworth on understanding attachment ‘Attachment’ is a lasting secure and positive feeling that bonds one person to another, one of the strongest forms of attachment is thought to develop between a mother and child. Many psychologist, sociologist, physicians and psychoanalysts have sought to explore the fundamental nature of attachment and how it had evolved.

Within this essay I shall examine •The origins of attachment •Psychologist who seek to measure it The methodology used & how it has consequently helped us understand attachment So how does attachment develop between a mother and child? Psychoanalytical theorists such as Sigmund Freud & J.

Don't use plagiarized sources. Get your custom essay on
“ Compare and Contrast the Work of Harry Harlow and Mary Anisworth on Understanding Attachment ”
Get custom paper
NEW! smart matching with writer

B Watson stated that ‘attachment’ was formed with a primary caregiver because they satisfy are basic biological needs, thus as babies we learn to love our mother or career as it is the person who feeds us, provides warmth and alleviates discomfort by changing our nappies or burping us (Custance 2010).

Bowlby, notable for his pioneering work in the ‘attachment theory’ did not believe that ‘cupboard love’ was the basis for attachment he suggested that “infants process inbuilt innate tendencies that lead to the forge of emotionally powerful ties to stimuli i. e. mothers with certain properties“(Bowlby 1970), Furthermore that attachment has formulated through ethology & behavioural tendencies that are present from birth.

These ideas were radical for the time (1940’s/50’s) and people were unconvinced, as Bowlby’s claims lacked scientific evidence.

In contrast to this, behaviourist would argue that infants do not immediately value their caregiver, indeed they learn to value them for example, a mother breast feeding a baby would habitually be associated with the primary reinforces of food and comfort thus, constituting a conditional stimulus (Custance 2010). Two psychologists who were directly and indirectly influenced by theorists such as Sigmund Freud was Harry Harlow (1905-1981) and Mary Ainsworth (1913-1999).

They both sought to investigate & measure ‘attachment’ between a mother and infant, Harlow using animals with in his research and Ainsworth using infants. Harry Harlow was motivated by scientist such as Bowlby (1970) and Konrad Lorenz (1952) and their evolutionary theory & ethological research; Lorenz believed that ‘attachment’ evolved through innate predispositions and imprinting, a learning system that occurs after birth and involves developing an attachment to a specific individual or object (Lorenz & Kickert 1981; Hess, 1958).

Influenced by their research Harlow set about his own investigations on attachment, using Rhesus Monkeys. He sought to investigate whether infants bond with their mother because of ‘cupboard love’ or as Bowlby suggested an “inbuilt tendency to become attached to stimuli that process certain properties” (Bowlby 1979). All Harlow’s experiments involved removing Rhesus monkeys from their mothers at birth, In one of his early experiments he noticed that the infants became increasing distressed when sanitary pads used to line the cages were removed during daily cleaning.

Harlow suspected that the infant’s affection for the pads was primarily based upon ‘contact comfort’ (Custance 2010) he embarked on further experiments to investigate this idea further. He separated two groups of infant monkeys from their mothers and placed them with surrogate’s mothers, one a terry cloth mother who provided no food while the other wire mother did, in the form of an attached baby bottle containing milk. In the second group the terry cloth mother provided food whiles the wire mother did not. Figure (a) Wire and cloth mother surrogates Harry F. Harlow The Nature of love (1958)

The results confirmed Bowlby’s findings that infant – parent bond is based upon innate tendencies as the monkeys showed a clear disposition for the terry cloth mother regardless which one produced milk (Figure a), therefore the tactile qualities of stimuli outweighed the importance of food. These finding were revolutionary at the time and went against most child rearing attitudes and practices. Nevertheless, Ainsworth initially was far from convinced about the validity of firstly Bowlby’s ethological account of attachment, secondly how Harlow‘s findings can be related to humans.

However after conducting her own observational study of mother infant attachment on Ugandan families (1953) the relevance of Bowlby’s work became apparent. Just like in one of Harlow’s variations experiment Ainsworth found that the Ugandan mothers acted like a ‘safe base’ to their babies, as did the terry-cloth mothers (Custance 2010), consequently the more maternal sensitive the mothers were to their babies signals the more confidant and explorative the children became. Somewhat of a paradox to the then common pedagogic advice of limiting or avoiding bodily contact in attempt to avoid spooling children, as advocated by Freud and J.

B. Watson and the insistence of the then dominant behaviourist school of psychology that emotions were negligible. Ainsworth concluded from her observations that qualitatively distinct patterns of attachment evolve between infants and their mothers in the opening years of life. Although a majority of these patterns are marked by comfort and security, some are tense or conflicted, and Ainsworth found evidence suggesting that these relationships were related to the level of responsiveness that mothers showed their infants in the earliest months.

How could this security of a relationship be measured? Ainsworth set about creating an artificial situation, named the ‘Strange Situation’, a method which allowed her to measure the mother –infant attachment in a controlled environment, similar to Harlow’s experiment however the difference being Ainsworths observations would be based upon humans and take into account ethical considerations unlike Harlow’s experiments.

The strange situation involved a standardised set of episodes involving a child, their mother and a Stanger in a sequence of separations and reunions. The procedure took into account, ethical considerations, ensuring the child was constantly monitored or if the child became too distressed during the separation the experiment was stopped.

The ‘Strange situation’ revealed three different types of attachment in children, (a)Secure ( Child would be distressed by mothers departure and easily soothed by her return) (b) Anxious-resistant (Child may stay extremely close to the mother during the first few minutes and become highly distressed at her departure, only to seek simultaneously comfort and distance from the mother on her return by such behaviours as crying and reaching to be held) (c)Anxious-avoidant ( child may not be distressed by mothers departure and may avoid or turn away from her on return) According o Anithworth & Bell (1970), 70% of children were classified as secure, 15% as anxious –resistant and 15% anxious –avoidant. Mary Main a college of Ainswoth later established a forth type of attachment, which Ainsworth accepted. (d)Disorganised/disoriented (Child would show signs of indecisiveness and confusion, often exhibit bizarre responses to separation such as freezing, rocking or hair pulling) This attachment style has been associated with parental neglect or abuse.

Ainsworth believed that the differences in human infant attachment types were entirely due to the mother’s ‘sensitive mothering’ (Mary Ainsworth (BBC) audio (2010), thus placing a great importance on the role of the mother at a time when woman’s rights were the dramatically changing in society. She was criticised for this as was Bowlby for a similar hypothesis, maternal deprivation, which stated any separation of a week or more between a child under the age of 5 and its primary attachment figure, usually the mother, would have a long term detrimental effect (Bowlby 1944).

Altmann (1980) somewhat contradicted these ideas, especially Ainsworth attachment categories, he put forward evidence that no attachment category is necessary better or worse than other, rather they are flexible and adaptive responses to different set of social circumstances. However he carried out his observational research on wild baboons, and whilst baboons have a similarities to human behaviour, it does not necessarily mean his findings can be applied to humans.

Similarly Harlow may have chosen Rhesus monkeys because of their evolutionally proximity to humans and close exhibitions to human behaviour (Rhesus and humans share 94% of DNA, Custance 2010). However this was not his primary reason for working with animals. His experiments would uncertainly never have been permitted to be carried out on human’s participants, especially those carried out later in his career, such as his monkey maternal deprivation and abuse experiments.

One in particular that caused much controversy, ‘The Iron maiden’ (Blum, 1994), which sought to explore, if an infant would remain attach to an abusive caregiver, this was branded “ethically thoughtless” by Midgley (1984) “ exploitive, painful and unjustified research” by Singer (1975), these experiments would undoubtedly be considered unethical today, however they have indisputably provided a great insight into the behaviour of abused children and helped improve the method of providing care to institutionalized children.

Furthermore the nature of Harlow’s descriptions highlighted the awareness of the treatment of laboratory animals and thus paradoxically contributed somewhat to today’s ethics regulations.

In addition, Ainsworth received furthermore criticism for placing a culturally specific value system on the data, something which Grossman (1981) noted, he stated a high incidence in avoidant behaviour was recorded in the study of German children, however it was not taken into account that they are encouraged from an early age to be independent, Similarly the Japanese study did not consider that Japanese children would hardly ever be left alone in a room by their mother Takahashi (1986).

Therefore this brings into question the ecological validly of Ainsworth’s strange situation and whether it can be applied across cultures. Despite this Ainsworth research on attachment has played in important role in our understanding of child development and her strange situation has become one of the most widely used procedures in child development history, it also has more recently been used to investigate attachment of different species. Our Understanding of Attachment

Prior to Harlow’s & Ainsworth research mothers practiced a philosophy of emotional detachment from their children, they were encouraged not to mollycoddle or spoil them, an unemotional upbringing was thought to toughen children up and prepare them for the rigours of adult life. These attitudes and practice have much changed primarily due Harlow & Ainsworth research and contribution to the publication of the ‘attachment theory’. Such research has highlighted that the loving care of an adult (caregiver) is so important for an infant’s survival & development, thus it is not surprising that the tendency to form attachment has evolved.

In conclusion, a range of evidence from birds, monkeys and humans indicates that attachment is not based upon ‘cupboard love’, instead humans and other animals process inbuilt tendencies to form attachment with stimuli that process certain features. However, human attachment is not ridgley fixed in the early infancy although it may operate according to certain inbuilt parameters, its complex and flexible system that still allows organisms to adapt to changing circumstances.

Compare and Contrast the Work of Harry Harlow and Mary Anisworth on Understanding Attachment. (2017, Jan 16). Retrieved from https://studymoose.com/compare-and-contrast-the-work-of-harry-harlow-and-mary-anisworth-on-understanding-attachment-essay 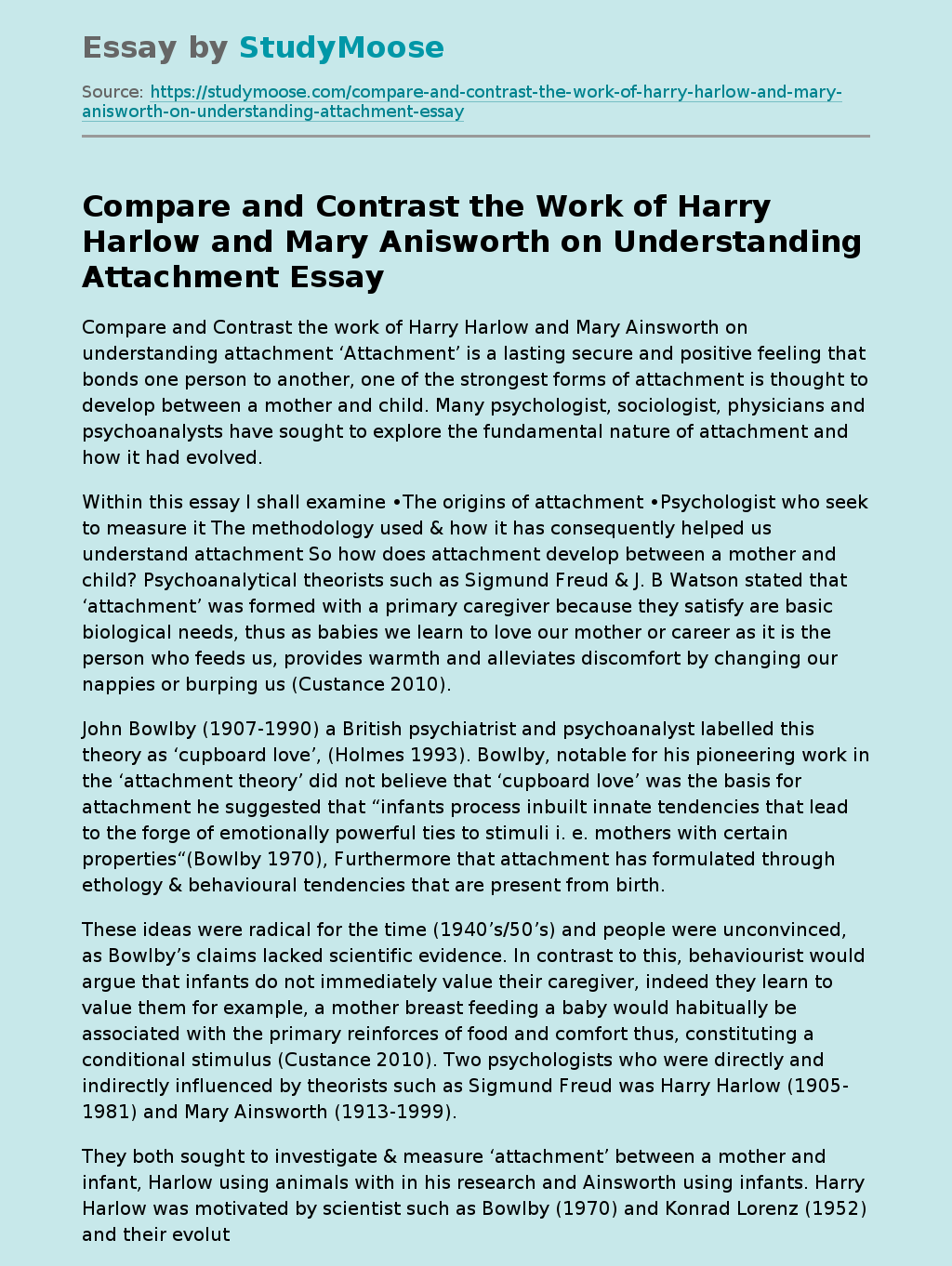