The poem First Love by John Clare is written about the poet’s feelings of unrequited love for a wealthy farmer’s daughter, Mary Joyce. The poet uses various unusual effects in the poem to convey this sense of loss, providing deep insights into his mind in a seemingly simple and brief piece. Combined with words which reflect the mood in each verse, these make it a very powerful poem. An unusual form of contrast is used in First Love to create a powerful effect.

Don't use plagiarized sources.
Get Your Custom Essay on Poem Analysis of John Clare’s First Love Just from $13,9/Page

The use of limited vocabulary is part of this, evident throughout the poem. The repetition of “sweet” suggests that the poet has not, or cannot, think of another adjective.

This is further shown in the way that he starts the second stanza with “and then”, a very informal and unusual opening in a poem. Combined with this, an informal tone is developed with the use of phrases such as “blood rushed to my face” and “I never saw so sweet a face”.

Despite this informal tone, the message of the poem is very insightful, as it shows a view into the poet’s mind. Rhythm in the poem is key to this, creating six sections in the poem, with the rhyme scheme for each being A, B, A, B, or for example “hour”, “sweet”, “flower”, “complete”.

These sections of four lines each can be seen as individual thoughts of Clare, as they each deal with a slightly separate topic. Rhetorical questions such as “Is love’s bed always snow” also contribute to this effect, as they are almost addressed back to the poet, providing an insight into his mind. Creating a thoughtful, musing atmosphere, these make First Love a powerful poem by contrasting the deep insights into the poet’s mind and the effects this love has had on him with the simple tone and vocabulary.

Divided into three stanzas, the poems examines the consequences of John Clare’s unrequited love for Mary Joyce. Stanza one deals with his initial effects she has on him, such as the total awe and shock at her beauty. In the first line, “struck” and “hour” create a metaphor of a clock, implying that this is the start of a new hour, or era in his life. The way that she has completely taken over Clare’s life is evident in the use of “stole my heart away”, and his helplessness in her hands is exemplified by his legs refus[ing] to walk away” and the question, “what could I ail? “.

These words combine to show that the sight of Mary Joyce for the first time has left the poet helpless and overcome by her, creating a powerful effect. Clare’s affected perception of reality is shown in the second stanza. The metaphor of his love taking his “eyesight quite away” so that the “trees and bushes” “seemed midnight at noonday” shows the reversal of Clare’s worldviews as a result of this love.

The way that “words from [his] eyes did start”, which “spoke as chords do from the string” conveys the scope of this, that he begins to talk in a different way, one that is universally recognised like music – the language of love. These two metaphors make the poem powerful by conveying the effect love has had on the poet. The final stanza changes the tone of the poem, lamenting the fact that Clare’s love is unrequited. Introduced by two questions which compare Mary Joyce to “winter” and “snow”, it shows that she is cold and hard.

It then concludes by linking Joyce’s “sweet… ace” back to the “sweet flower” mentioned in the first stanza, but shows that she has trapped him, so that his “heart” “can return no more” to where it once was. The choice of cold, unforgiving words such as “winter”, “snow” and “silent” creates an atmosphere of lament and sorrow, and the final line links back to the first, which implies the start of a new age for Clare, as he “can return no more”. This stanza makes the poem powerful by effectively concluding the poem, and by introducing the sorrow which is the final effect love has had on the poet.

The power and effectiveness of First Love is not in the cliched message of unrequited love itself, but the way that it portrayed. Clothed in a simple vocabulary and soft meter, a deep message is hidden which evokes great sympathy in the reader. By opening a window into the poet’s mind, the reader is able to see the complete hold the love has on Clare’s life and thoughts. Accomplished through contrast and effective word choice, this is the reason John Clare’s First Love is such a powerful poem. 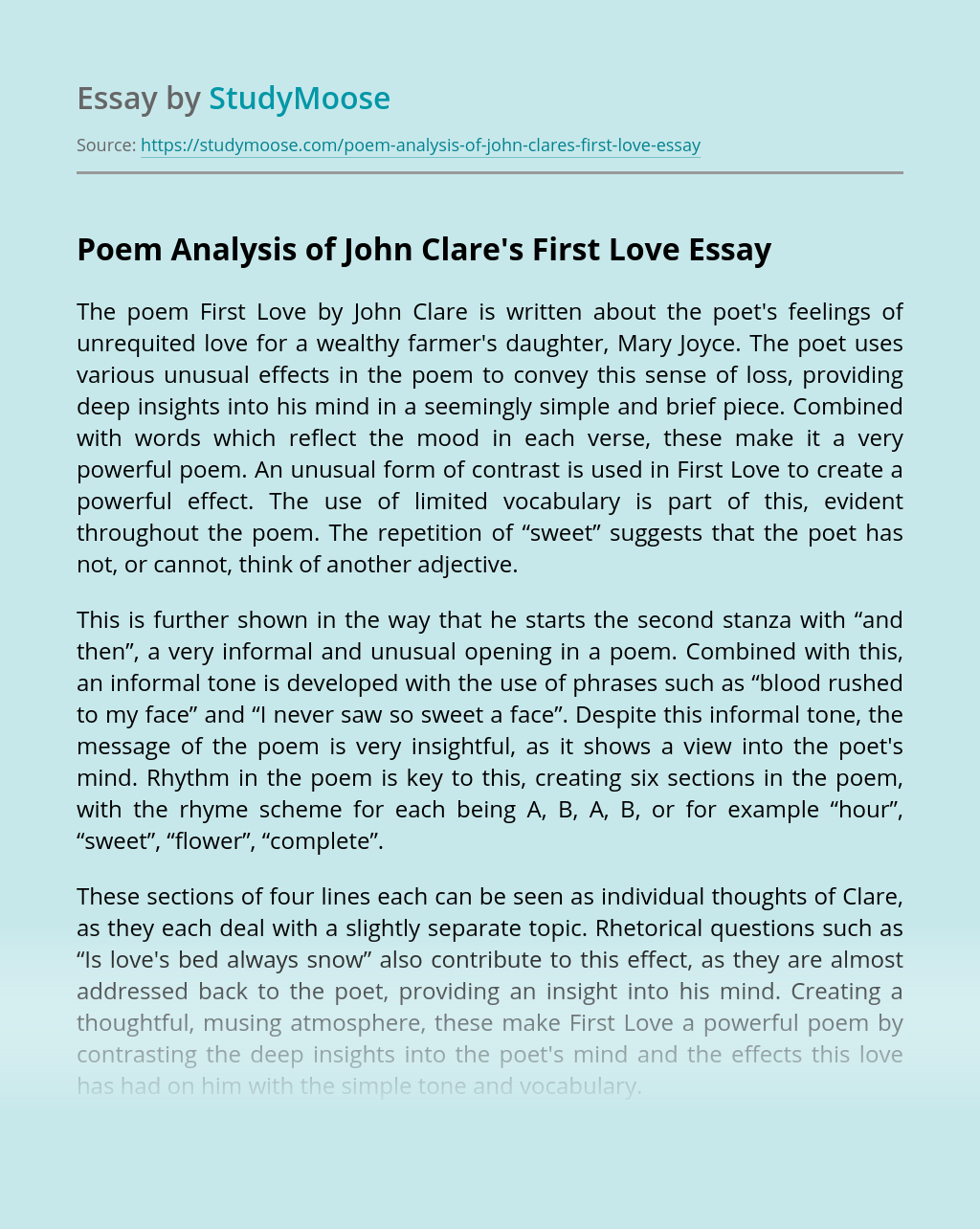 Many critics attempt to show how the disguise relate to the different parts, and/or different characters of the play. This story explores a cariety of themes and issues, however disguise, deceit, celebration and festivity are the major, more prominent ones. Although the play is a “silly play” said by Samuel Pepys, who saw the play...

Me, Myself and I

My Family, I admit I had a big family. My family is not perfect like others. Well, I just say that we are living well. Ate at least 3x a day, wear a normal dresses bond with them at least once a month. However, sometimes we did not expect some circumstances and trials that came...

Get Essay
Have You Ever Experienced Falling in Love?

Have you ever experienced falling in love? How do you know if you’re in love? Does age really matter when you fall in love? What does love feel like? These are some of the questions asked by teenagers like me. I, as a teenager, admit that I have loved someone, and have been loved back....

Aspects of love - Romeo and Juliet

Now Juliet’s father has a leading role in Juliet’s “love life”. In Verona the people were catholic and it was to have arranged marriages. With Juliet as a young teenager, Capulet thought she might have been too young to get married; Capulet- “My child is yet a stranger in the world; She hath not seen...

The god who loves you

Carl Dennis in the poem The God Who Loves You tries to give us a different perspective of how God views us. He writes in the first two lines “It must be troubling for the god who loves you/To ponder how much happier you’d be today. ” These lines set the mood that Dennis is...