The Statistical "Probability of Love at First Sight"Summary

Love at first sight is a controversial subject because it’s a matter of believing in fate or not. Fate is a peculiar thing, at that. In The Statistical Probability of Love at First Sight by Jennifer E. Smith, the main characters, Hadley and Oliver, meet against all odds on a modern day flight to England from America. Oliver, is the British boy Hadley never imagined she would ever meet let alone fall head over heels for in such a short period of time.

Don't use plagiarized sources. Get your custom essay on
“ The Statistical “Probability of Love at First Sight”Summary ”
Get custom paper
NEW! smart matching with writer

Hadley is the calm to Oliver’s storm but what will happen when Hadley realizes she may lose the one person that understands her?

Hadley Sullivan hasn’t seen her father for over a year, and now she’s going to London, England for his wedding to a woman she’s never met that will soon have the title. In the airport she meets a hot British guy named Oliver, but loses track of him when the plane lands.

Hadley slumps to the wedding without even having gotten Oliver’s phone number, last name, tries to figure out what role she has or wants in her dad’s new life, and learns that there are worse things than a father who leaves for another woman.

Oliver, who recently lost a father whom he never particularly admired, just wants to forget about his problems and uses Hadley as a distraction for the 18 hour flight that they are enduring together. Hadley has an epiphany and races to the only place she could imagine him being at.

When she arrives, she thinks that Oliver didn’t even want to continue speaking, even though that flight is the best thing that has ever happened to Hadley.

Little does she know that Oliver was going through a rough patch in life; while she’s upset about her father remarrying, he’s losing his father permanently. She lives in distraught and then Oliver follows her back to her father’s reception ceremony and tells Hadley how he really feels. In the end, Hadley and Oliver live happily ever after, Hadley realizes how happy her father is and forgives him for abandoning her mother and herself and agrees to start reconnecting with him and her new stepmom who turns out to be very nice and Oliver learns how to feel again.

I thought the book was alright. It was very cliché and reminded me of many other young adult romance books, but it was decent. I wouldn’t recommend this book as a must-read novel, perhaps as something to read in their spare time when they have nothing better to read. It was extremely easy to read, there was not a lot of effort needed to complete this novel. I think that the author chose the title The Probability of Love at First Sight because in the book Hadley asks Oliver what he’s majoring in at college and he always has some kind of improvised answer that involves a study that isn’t important but it makes her laugh. In addition to that reason, it is also a story about love at first sight.

This book relates to my life because I know how Oliver feels after losing his father because I lost my father as well. I can also relate to Hadley because my mom recently remarried to a wonderful man that makes her happy. I have also met someone on a trip that I became very close to. A few years ago I made a friend on a Caribbean cruise and we became best friends and he only lives 3 hours away. We may not have fallen in love but we became good friends that still stay in contact.

The Statistical "Probability of Love at First Sight"Summary. (2016, Sep 30). Retrieved from https://studymoose.com/the-statistical-probability-of-love-at-first-sight-summary-essay 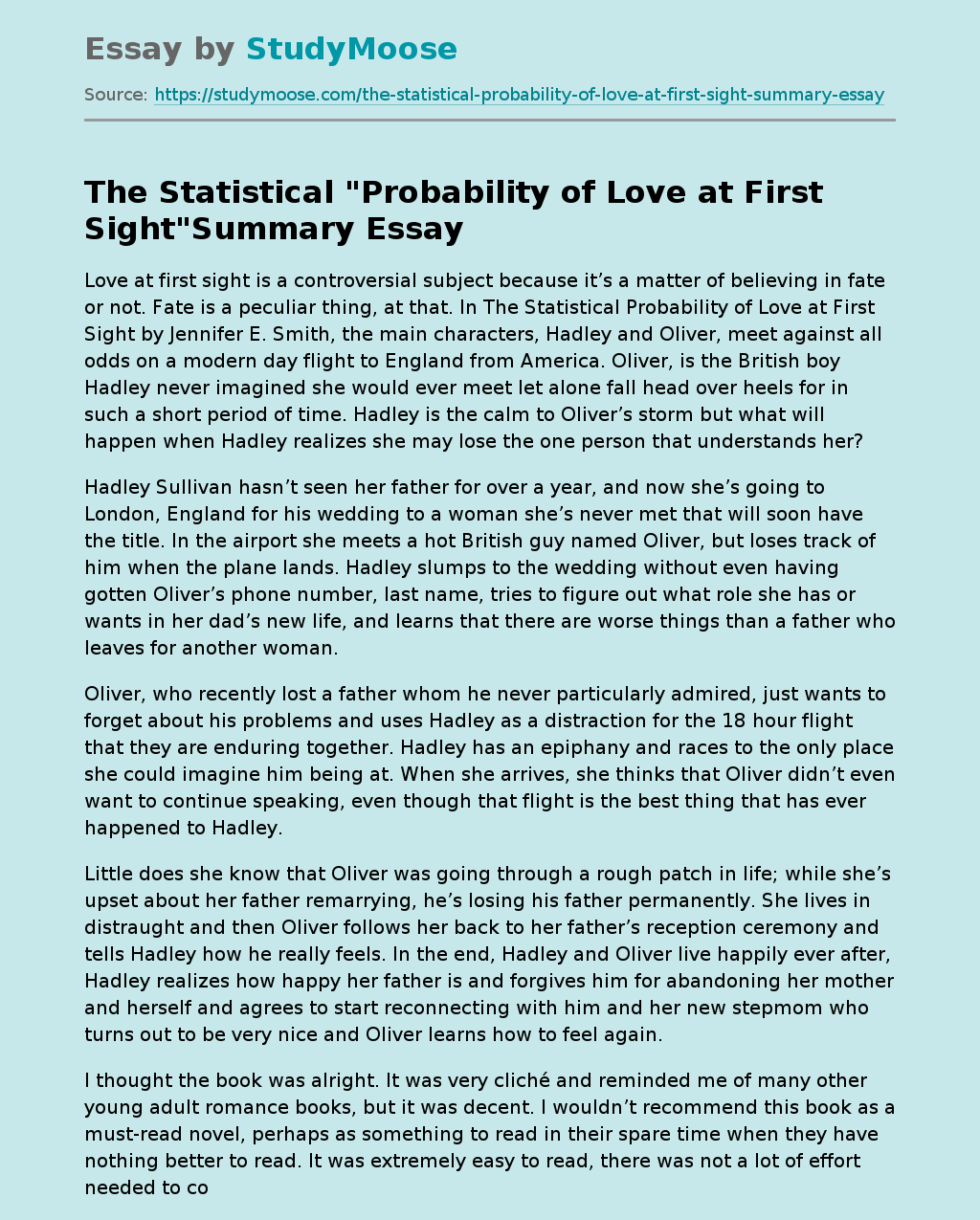