Hamlet: Is He Insane?

This paper feels that Shakespeare’s Hamlet from the play “Hamlet” may appear to be insame but really is sane.

Hamlet: Is He Insane? The term insanity means a mental disorder, whether it is temporary or permanent, that is used to describe a person when they don’t know the difference between right or wrong. They don’t consider the nature of their actions due to the mental defect.(“Insanity”, sturtevant) In William Shakespeare’s play “Hamlet” Shakespeare leads you to believe that the main character, Hamlet, might be insane.

Don't use plagiarized sources. Get your custom essay on
“ Hamlet: Is He Insane? ”
Get custom paper
NEW! smart matching with writer

There are many clues to suggest Hamlet is insane but in fact he is completely sane. Throughout the play Hamlet makes wise decisions to prove he is not insane. He knows exactly what he is leading up to. He just delays to act due to his indecisiveness. An example of this is in Act III, section III, line 73, Hamlet says “Now might I do it pat, now ‘a is a-praying, and now I’ll do it-and so ‘a goes to heaven, and so am I revenged that would be scanned.

A villain kills my father, and for that, I, his sole son, do this same villain send to heaven. Why, this is hire and salary, not revenge.” He says here that he has his chance to kill his father’s murder but, he is praying. By killing him while he’s praying his soul goes to heaven and this wouldn’t be revenge. This is not a thought of an insane person.

An insane person would have completed the murder at this opportunity. In Act III, scene I, line 55, “To be or not to be…”, Hamlet displays his indecisiveness by thinking about suicide because of the situation he is in. He would rather be dead than live with the thought of his father’s death going unavenged. He is scared to get revenge because he found out from a ghost and he doesn’t know what to do. In line 83,” Thus conscience takes a major part in the thought and action of murder. This is why he delays so long to commit the murder. An insane person would not wait. They would be more apt to act in impulse. Hamlet’s madness only existed when he was in the presence of certain characters. When Hamlet is around Polonius, Claudius, Gertrude, Ophelia, Rosencrantz, and Gildenstern, he behaves irrationally. For example in Act II, section II, Polonius asks Hamlet,” Do you know me, my Lord?” Hamlet replies,” Excellent well, you are a fischmonger”. Hamlet pretends not to know who Polonius is, even though he is Ophelia’s father. When Hamlet is around Horatio, Bernardo, Fransisco, the players and the Gravediggers, he behaves rationally. In Act I, section V, lines 165-180, Hamlet says “How strange or odd some’er shall think meet to put on antic disposition), That you, at such times, seeing me, never shall, with arms encumbered thus, or this head shake, ….” He dowsn’t want Horatio to reveal anything that might be going on. If Horatio isn’t surprised by Hamlet’s supposed madness or he leads on that he knows or something then Hamlet’s antic disposition will not be affective. He tells Horatio he will be acting mad and he mustn’t say anything. If Hamlet plans to put on an act of antic disposition then he can’t be insane. Throughout the play Hamlet questions everyone. He questions the ghost, is he real? He questions Rosencrantz and Gilderstern, Polonius, Claudius, Gertrude, and Ophelia. In Act III sc. I line 103, Hamlet asks Ophelia “Ha, Ha! are you honest? Are you fair?” and “Where is your father?” Ophelia tells Hamlet he’s at home. Hamlet somehow knows that he is being spied on by Claudius and Polonius so he pretends to be mad. At this point the King says in line 180 “Madness in great ones must not unwatched go.” He still is not completely convinced of Hamlet’s madness so he is cautious. Throughout the entire play Hamlet is careful with his actions. He thinks everything through. Although he delayed his actions longer than Laertes did, he planned all his actions out instead of acting out in a foot of rage. He had to be completely sure before taking action. Hamlet was completely aware of his actions and what was morally correct. He never lost sight of his objective to expose the King’s sin of murdering his father and obtaining revenge. Hamlet was completely sane throughout this Shakespearean tragedy. 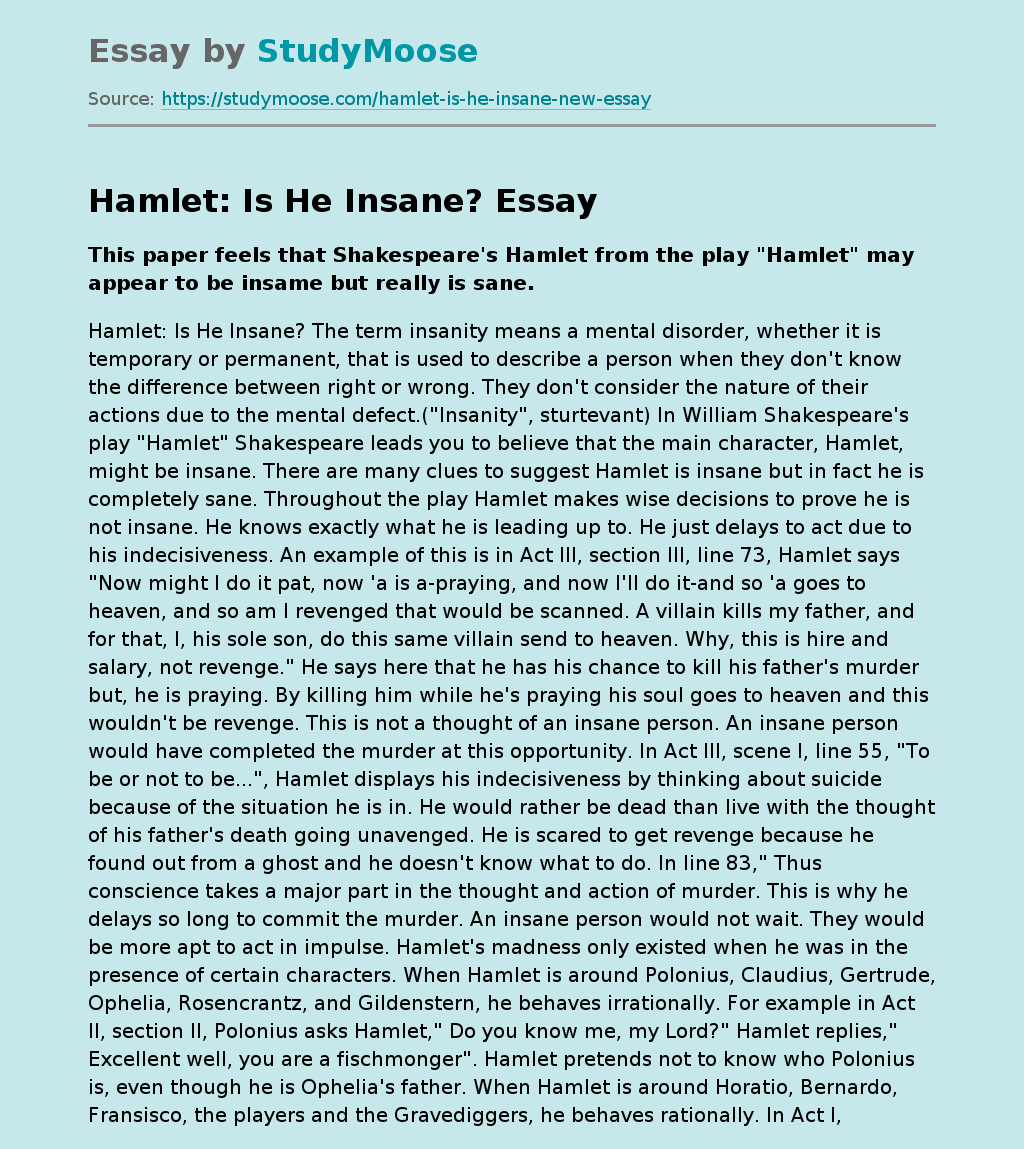