"I'm nobody! Who are you?" by Emily Dickinson

Never judge a book by its cover. Appearances can greatly deviate from what is hidden on the inside. “Richard Cory” by Edwin Arlington Robinson, “We wear the mask” by Paul Laurence Dunbar, and “I’m nobody! Who are you?” by Emily Dickinson each give examples of appearances in contrast to reality. Robinson’s “Richard Cory” is essentially about a man who is set upon a golden pedestal by others and due to his suppressed sadness, kills himself. “We wear the mask” by Dunbar shows us society’s use of a “mask” to hide their sorrow and grief, grinning and smiling when they truly feel overwhelmed with sadness.

Don't use plagiarized sources. Get your custom essay on
“ “I’m nobody! Who are you?” by Emily Dickinson ”
Get custom paper
NEW! smart matching with writer

With each authors use of poetic language feelings are stirred and the discrepancies between appearances and reality are clearly expressed.

Robinson’s “Richard Cory” lets us closely examine appearances in contrast with reality. All who knew of Richard Cory held him in reverence; they glorified him and were quite jealous of his lifestyle. “And he was always quietly arrayed, and he was always human when he talked; but still he fluttered pulses when he said, ‘Good morning,’ and he glittered when he walked….

In fine we thought that he was everything to make us wish that we were in his place” gives a perfect example of how highly Richard Cory was thought of by “the people on the pavement” and how they wished to be of his status.

Those who watched Richard Cory every time he went into town might have desired all Cory had and was, but they were deceived by his rejection of the eminence that his fellows would accord him. “And Richard Cory, one calm summer night, went home and put a bullet through his head,” although it may seem somewhat an ironic and abrupt ending, it suits the theme well, quickly identifying the concept of appearance versus identity. Robinson also shows us appearances versus reality through his use of poetic language.

Robinson’s use of imagery, and irony enhances the poem greatly. Robinson uses imagery throughout the course of his poem. “And he was always quietly arrayed…and he glittered when he walked,” Robinson uses visually stimulating words and phrases to show the magnitude of a man that was Richard Cory. Robinson also makes use of irony in “Richard Cory,” enabling us to understand the truth of Cory’s existence, that of a sad man, no better than any of those “on the pavement.” “And Richard Cory, one calm summer night, went home and put a bullet through his head,” after all that reverence, Richard Cory was in all respects unhappy. This use of poetic language in “Richard Cory” provokes feelings of grandness and jealousy.

When Richard Cory’s fellows looked at him, they saw him as of royalty, of pertaining to that which heavenly or divine; howbeit, they were looking through eyes full of envy. Richard was held in high regards. “And he was rich – yes, richer than a king – and admirably schooled in every grace,” his ranking alongside Kings gives a sense of how grand a man the townspeople made Cory out to be. People on the street admired Cory from afar; they wished to be him, to walk in his shoes, they coveted his very essence. “In fine, we thought that he was everything to make us wish that we were in his place. So on we worked, and waited for the light, and went without meat, and cursed the bread…” the extent of their jealousy runs far. However, “We wear the mask” by Dunbar, in it’s own way, also deals with the same principles of appearance versus reality as did “Richard Cory.”

Through the use of an extended metaphor and sensory, Dunbar further allows the exploration of appearances versus reality. “We wear the mask” tells of a mask which hides the face, which hides the emotions one is feeling, the term “mask” is used throughout the poem as a metaphor; Dunbar does not write of a mask which is adorned and used for masquerades, rather, he writes of the inherent suppression of emotions for fear of being ostracized from a society which is quick to do so. “Nay, let them only see us while we wear the mask,” the mask is a necessity in life, it is worn by all. Sensory language in “We wear the mask” enables the reader to feel the pains and sufferings of the human race.

Dunbar’s use of extended metaphor and sensory in “We wear the mask” elicits pride and empathy in the reader. “We smile, but O great Christ, our cries to thee from tortured souls arise. We sing, but oh, the clay is vile beneath our feet, and long the mile…” lines such a these enable the reader to empathize with the narrator. The way poetic language was used in “We wear the mask” evokes feelings of empathy in the reader, as well as pride.

Throughout the course of Dunbar’s poem, one cannot help but feel a sense of empathy and pride. Reading this poem, a sense empathy for humanity arises, for the pain we all face day in and day out. “We smile, but O great Christ, our cries to thee from tortured souls arise,” evokes the feeling of empathy towards the plights of humanity. A sense of pride is also given in the poem with the narrator’s refusal to let others see him without the mask. “But let the world dream otherwise, we wear the mask!” the narrator voices this statement with pride. In addition, “I’m nobody!” by Dickinson also faces the idea of discrepancies between appearance and reality.

Dickinson’s “I’m nobody!” explores appearance in contrast with reality. The true face of the reader is being questioned, their identity so to speak. “I’m nobody! Who are you?” Dickinson suggests, through the persona of a child that the true somebody is, in reality, the nobody. In order to remain in society, one must adopt the views and beliefs of society regardless of your own. “Are you nobody too? Then there’s a pair of us–don’t tell! They’d banish us you know,” this shows how people must appear to be the same as the majority, even though in reality, they may be quite different. Dickinson also shows us appearances versus reality through her use of poetic language.

Dickinson’s use of tone in “I’m nobody!” is playful and at comical. The child persona she adopts gives the sense of a playful nature in the poem. “I’m nobody! Who are you? Are you nobody too?” gives the main evidence of its playful tone. At times, Dickinson pokes fun at society, comically pointing out its errors. “How dreary to be somebody…To an admiring bog!” gives a comical, yet true, depiction of society. This poem, like all the rest, expresses appearance in contrast with reality.

In Robinson’s “Richard Cory,” Dunbar’s “We wear the mask,” and Dickinson’s “I’m nobody!” appearance versus reality is exhibited through the usage of poetic language evoking various feelings in the reader. Hiding the true self from society is a necessary part of life, everyday it must be worn in order be accepted, and these three poems are exemplary. Appearances are just that, appearances, and nothing more; the true individual is far different from that which we see. Are we all not quick to judge a book by its cover?

"I'm nobody! Who are you?" by Emily Dickinson. (2016, Jun 18). Retrieved from https://studymoose.com/im-nobody-who-are-you-by-emily-dickinson-essay 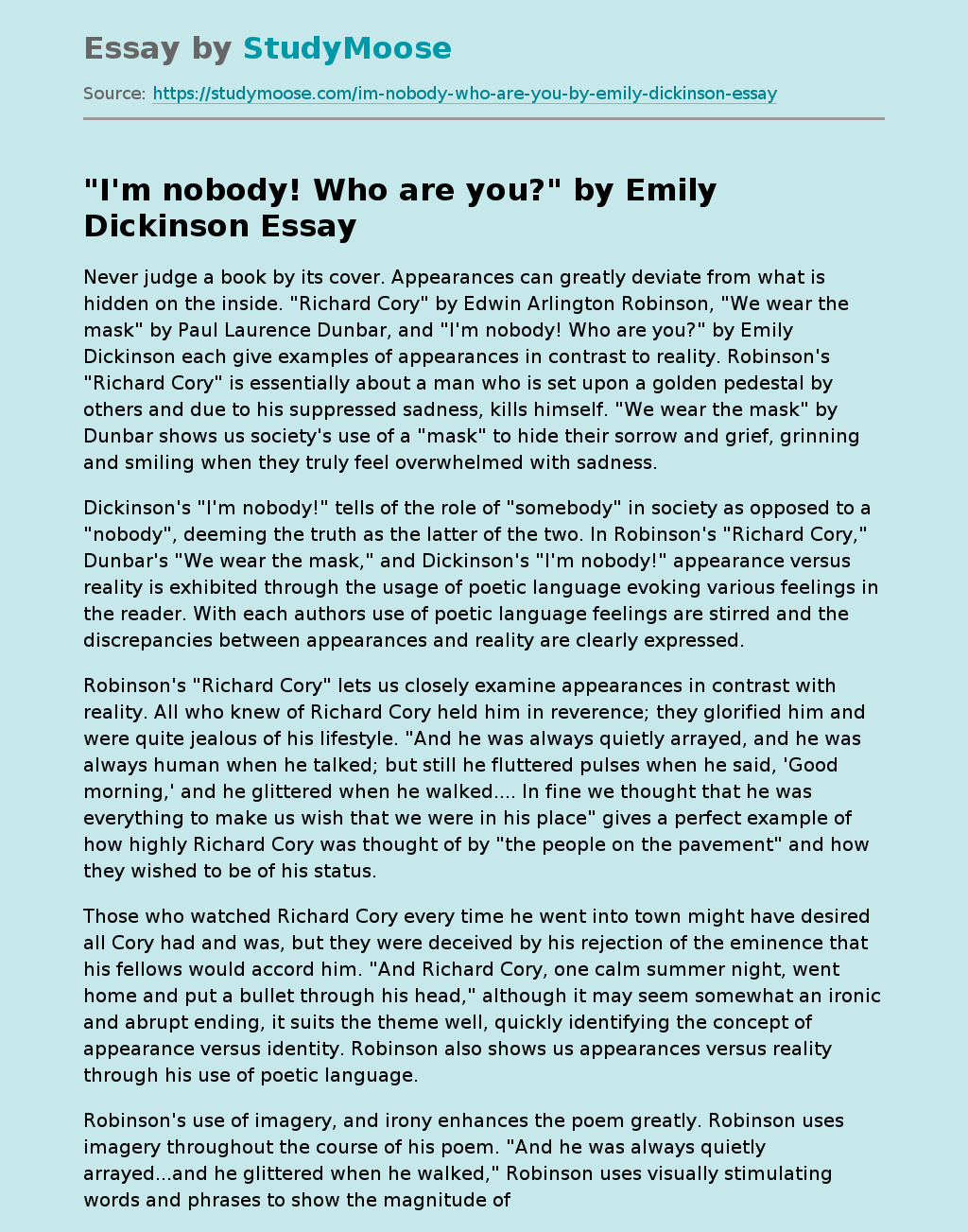