Appearances are Deceiving in Shakespeare's Macbeth

The Renaissance play The Tragedy of Macbeth, written by William Shakespeare, truly demonstrated a compelling tale of greed, power, and jealousy. The play revealed the turn of a good nobleman into a powerful and greedy king. It showed audiences how one crime led to another and eventually to a gruesome melee. Throughout the tragedy there appeared to be a reoccurring theme stated finest as appearances are deceiving. The audience is first introduced to the theme in the first scene of the play where the witches said the profound phrase, “Fair is foul, and foul is fair” (I, i, 10).

Don't use plagiarized sources. Get your custom essay on
“ Appearances are Deceiving in Shakespeare’s Macbeth ”
Get custom paper
NEW! smart matching with writer

The Tragedy of Macbeth continued to present the idea of images being deceivingly different from the actual appearance.

First, in Act I, the key phrase, “Fair is foul, and foul is fair” (I, i, 10), was expressed as an example of the constant theme. That main phrase foreshadowed how appearances could deceive because, in essence, it stated that good was bad and bad was good.

At first, the audience was shown that Macbeth was a gentle nobleman who would despise the thought of killing. However, Lady Macbeth, his wife, was greedy from the start of the play and continued to persuade her husband into killing the king, Duncan. The phrase foreshadowed the change in characters as well, because Macbeth was the “fair” individual, as his wife would start as the “foul” one. Further on, Banquo asked Macbeth, “Good sir, why do you start, and seem to fear / Things that do sound so fair?” (I, iii, 51-52) after he was told news by witches that he would be king.

He was asking why he was frightened by good news; meanwhile, the audience knew that the witches were pernicious souls. In that passage, the appearance or sound of the news was good, but the truth was not fully told and therefore was misleading. Next, Lady Macbeth tells her husband, “Only look up clear / To alter favor ever is to fear” (I, v, 70). She told Macbeth to look composed and that he should not have an altered or worried face because such behavior would be dangerous. If the noblemen had noticed Macbeth acting nervous then he would be a prime suspect for the future murder they talked about. Lady Macbeth’s plan was to be calm and camouflage their guilty appearance, deceiving everyone. She coveted the title of queen to such an extent that she continued to badger her husband into killing the King until he said yes.

After, they conspired his murder, Duncan arrived at Inverness, Macbeth’s castle, and said, “This castle hath a pleasant seat; the air / Nimbly and sweetly recommends itself / Unto our gentle senses” (I, vi, 1-3). This quote was ironic and again demonstrated the thought that appearances are deceiving. The audience knew that Duncan was going to die there, which certainly not pleasing or nice, as he described the castle. The appearance of the castle’s serenity was deceiving. In Act I, many examples showed outward appearances were in reality deceiving to the characters.

Furthermore, three main examples in Act II clearly stood behind the theme of the drama. Looks appeared deceiving first when Lady Macbeth was told about King Duncan’s death by Macduff. Lady Macbeth pretended as if she was shocked by saying, “Woe, alas! / What, in our house?” (II, iii, 82-83). She asked the question as if she did not know what had happened; her appearance in the situation was misleading to all the other characters. Later in the same scene, another example of Lady Macbeth’s facade occurred when Macbeth started rambling and drew attention to himself. To distract the guests, Lady Macbeth feigned fainting, gasping, “Help me hence, ho!” (II, iii, 113).

She took on the form of a mourning, frightened woman. Soon after her performance, Duncan’s sons, Donalbain and Malcolm, contemplated fleeing. Donalbain commented, “There’s daggers in men’s smiles” (II, iii, 134). Here he was saying that one of the noblemen was lying–pretending to be their ally when in reality one of them is a wretched murderer. He and Malcolm flew for fear of their own lives, but to others it seemed to be a sign of their guilt, another false appearance. These three examples in Act II fortify the theme of false appearances.

Additionally, Act III was replete with examples of the theme. Macbeth told Banquo, “We should have else desired your good advice / … / In this day’s council; but we’ll take tomorrow[,]” (III, i, 20, 22) even though he knew Banquo will not see tomorrow, for Macbeth was arranging his murder. Then, he calumniated that Malcolm and Donalbain “are bestowed / In England and in Ireland, not confessing / Their cruel parricide,” (III, i, 29-31) when, of course, he knows they are innocent of any wrongdoing. After Banquo leaves his palace, he told his guests that “To make society / The sweeter welcome, we will keep ourself / Till supper-time alone[,]” (III, i, 43) when in reality, he just wants time to consort with men to scheme Banquo’s murder. In a discussion with his wife just before supper, Macbeth tells her to “Let [her] remembrance apply to Banquo[,]” whilst he knows that Banquo will be dead that night. Macbeth periodically deceives his guests with his words.

In addition, Act IV of Macbeth abundantly used examples of deceiving appearances. In the first scene of the fourth act, the three witches conjured apparitions for Macbeth. The second apparition, a bloody child, told Macbeth, “…for none of woman born / Shall harm Macbeth” (IV, i, 80-81). Macbeth assumed every person was born of woman; therefore, he was invincible. However, he did not see that the apparition was implying an unnatural birth, a caesarian section; and a false sense of hope was instilled in him. The third apparition, a crowned child holding a tree, proclaimed, “Macbeth shall never vanquished be until / Great Burnam Wood to high Dunsinane Hill / Shall come against [Macbeth]” (IV, i, 92-94). Macbeth again took this warning as he pleased. The king exclaimed that trees could not uproot themselves and walk toward Dunsinane Hill, upon which sat his house; therefore, Macbeth would never be vanquished.

The apparition, however, meant when the wood itself, which could be cut down and carried by people, reached the hill, he would be vanquished. While this was happening, Macduff, a former friend of Macbeth, left in search of Malcolm, the rightful heir to the throne. Macduff needed the help of Malcolm to overthrow the tyrant. When Macduff reached Malcolm, he was unsure if he could trust Macduff so he fabricated a false scenario of what it might be like if he were king. Malcolm told Macduff, “and the poor state / Esteem him as a lamb, being compared / With my confineless harms” (IV, iv, 53-55). Malcolm made himself out to be an immoral man to test Macduff. Malcolm actually wanted to discover if he could trust Macduff’s intentions. In Act IV, Macbeth was oblivious to the double meanings, but soon after the terrible truth announced itself to the overconfident Macbeth.

Finally, in Act V, the three apparitions came true in reverse order, and the second and third apparitions surprised Macbeth with their ambiguous meanings. The third apparition was brought to Macbeth’s attention by a messenger who exclaimed, “Within this three mile my you see it coming / I say a moving grove” (V, v, 37-38). Macbeth began to realize the grave meanings of the apparitions. He began to suspect the ambiguous meanings and proclaimed, “I pull in resolution, and begin / To doubt th’ equivocation of the fiend / That lies like the truth” (V, v, 42-44). Next, the second apparition proved itself true. Macduff came to fight Macbeth, but the king was not at all frightened.

Macbeth told his adversary he had no reason to fear Macduff because any person born from a woman could harm him. Macduff replied, “Macduff was from his mother’s womb / Untimely ripped” (V, viii, 15-16). Startled, Macbeth then realized that the second apparition meant that one born and unnatural birth could slay him. Macbeth was ashamed that he had refused to see the apparitions’ warnings. Macbeth then said, “And be these juggling fiends no more believed / That palter with us in a double sense” (V, viii, 20-21). Macbeth had been defeated and it was no one’s fault but his own for being close-minded and overconfident.

The Tragedy of Macbeth, written by William Shakespeare, had numerous examples of deceptive happenings. The play shows how one evil deed will lead to another. Shakespeare also showed how a person’s character could reverse drastically through the many happenings a person must endure, good or bad. In this case, the change was sparked in Macbeth due to his own greed for power. At the beginning of the play, the phrase was spoken: “Foul is fair, and fair is foul” (I, i. 10) by the three malevolent witches. Shakespeare’s play kept readers on guard by continuously presenting the idea of images, actions, and words being deceivingly different from how they appeared.

Appearances are Deceiving in Shakespeare's Macbeth. (2016, Jun 26). Retrieved from https://studymoose.com/appearances-are-deceiving-in-shakespeares-macbeth-essay 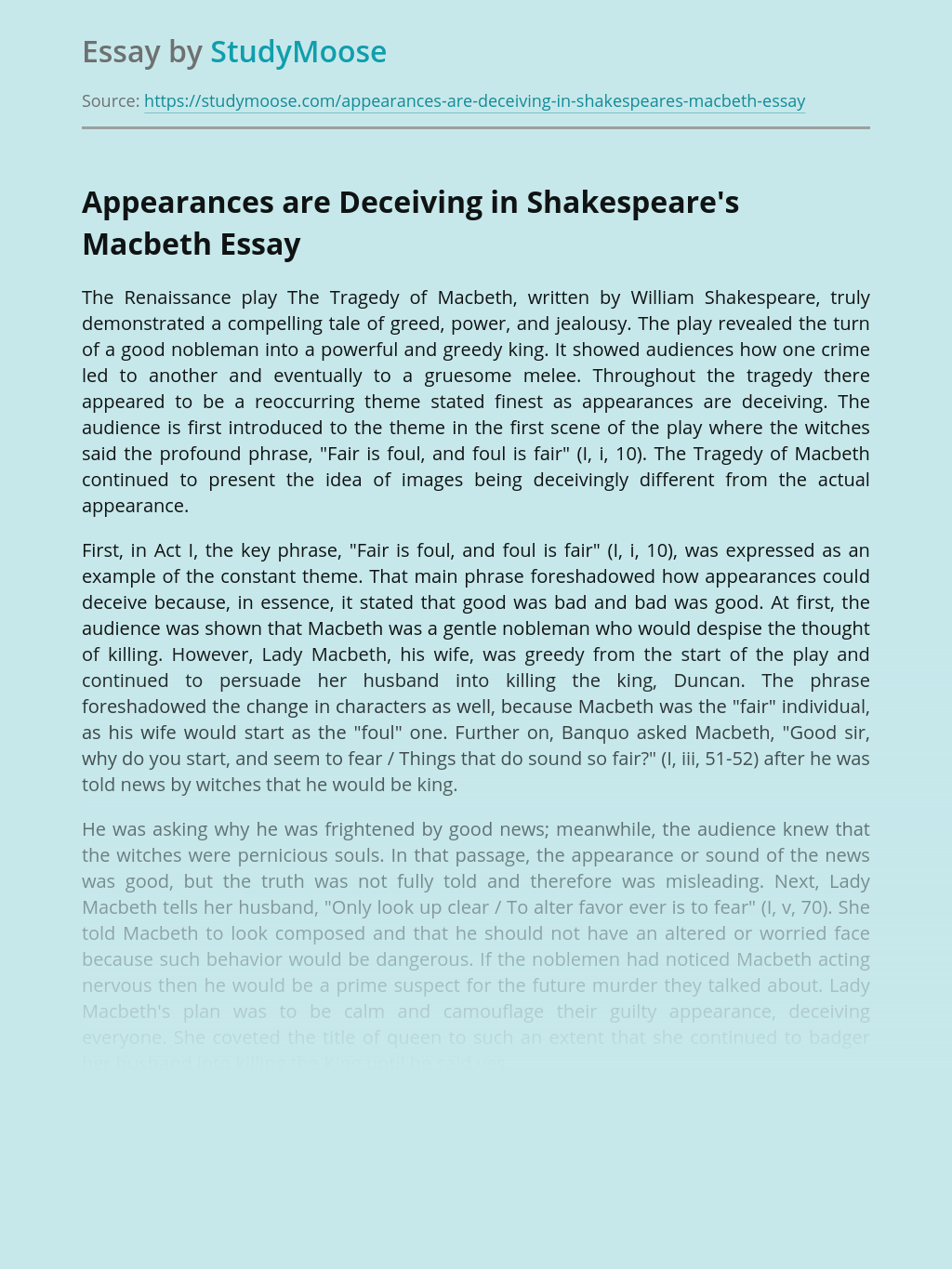