Guilt, Madness and Innocence in Hamlet

The term insanity is intellectually described as “a mental illness of such severe nature that a person cannot distinguish reality from fantasy… or is subject to uncontrollable impulsive behavior” (Howes). In present days, insanity is a term that is used to interpret someone’s guilt or innocence, and it can be used to test Hamlet’s innocence in Hamlet by William Shakespeare. In this tragedy, Hamlet discovered that his uncle, Claudius, has poisoned King Hamlet in order to take over the throne.

Don't use plagiarized sources. Get your custom essay on
“ Guilt, Madness and Innocence in Hamlet ”
Get custom paper
NEW! smart matching with writer

After finding this message from the ghost of King Hamlet, he is determined to seek revenge, however as a result, his actions has not only been harmful to himself, but others around him as well. He has put many lives at risks and has even murdered a man without any legitimate reasonings on his pathway to look for King Claudius to be found as guilty and punish him for his wrong doings.

Hamlet not only fails to take responsibility for himself, but also does not go through with all the consequences he had to face and continues to ignore the harm that he is putting towards others who loves him and just wants the best for him.

His violent actions come at the cost of others existence and their overall welfare. Hamlet’s sense of conscientious values wanders off from good to evil, as he loses his sight on important values such as family and friends. He disregards any good morals that he should have as he is the Prince, but chooses to ignore all of it.

Instead of focusing on any good morals a prince is expected to have, he instead puts all his attention and devotion into putting up acts as cover schemes to get back at King Claudius for killing his father. However, in these acts Hamlet seemed to be truly “losing it” and is considered as the crazy prince who have lost his mind. Therefore, Hamlet unveils true insanity in his acts of counterfeit madness.

Throughout the novel, Hamlet has put his mother, Queen Gertrude, in a tremendous amount of stress due to her always being concerned about his well beings. Although the ghost of King Hamlet has told him to not involve the queen into his schemes of getting revenge on King Claudius, he does anyway criticizing and yelling at the queen for marrying his uncle Claudius and also by not giving King Hamlet a proper mourning period. He asks the queen “What devil was’t that thus hath cozened you at hoodman blind?” (Shakespeare 3.4.86-87). Hamlet proclaims that his mother has been sinful and has been changed by the devil, which is why she chose to marry Claudius. Hamlet attacks his own mother and makes her feel as if it was her fault for everything that had happened, but does not take notice on how his actions are harming her.

He turns her to be as if she is morally a bad person, but seems to fail to realize that he is being hypocritical due to him being the only person who lacks morals in situations. Hamlet continuously criticize Queen Gertrude, even when she repeatedly told him to stop. His plays of words affects Queen Gertrude greatly, as she says “These words like daggers enter in my ears” (3.4.108), being traumatized by his plays of words due to the fact that he repeatedly attacks her for her life choices. Hamlet is oblivious to all his consequences and does not realize that in his quest of revenge, he continues to keep harming others around him. This characterizes Hamlet from the act of madness that he puts into his acts of cover schemes because throughout the schemes, he is affecting others their lives, but does not understand what is truly considered as right from wrong. He loses his sense of morals as he continues to become devoted into getting revenge on King Claudius and throws away his sense of values when it comes to his family by involving Queen Gertrude into his mess and making her go into a state of extreme stress for worrying about him.

Hamlet also loses sense of control and goes into his worse extremes when he accidentally commits an act of murder towards Polonius. When Hamlet finds out that someone was hiding behind the curtain, listening into his conversation with the queen, Hamlet assumably believes that it was King Claudius and does not think further into what he did, which was abruptly stab the person without knowing who it was or what their intentions were. As Hamlet already did his wrong doings by stabbing the person behind the curtain, he states “Nay, I know not. Is it the King?” (3.4.31) questioning who he had just murdered. He had killed Polonius without any reasonings to behind it, ignoring all necessary thinking that should have been going through his head first.

Hamlet may have killed Polonius due to the fact that he did not want to reveal himself from his cover schemes, but this does not change the fact that he had murdered a man without knowing his true volition. The only reason how Hamlet has identified Polonius is when he thought that Queen Gertrude has passed away, at that time, Polonius showed his good intentions by wanting to protect the queen. This is an example of Hamlet’s poor behavior, by him not thinking before he does any of his actions. He does not think about the consequences of murdering a person, which is considered to be one of the worst sins to be made. The fact that Hamlet made the choice to take someone’s life away without acknowledging his marks of unreasonable thought procedure and in this matter, his insanity.

Many believed that Hamlet’s poor actions are all a part of his revenge towards King Claudius, although others says otherwise. Hamlet states he will put up “an antic disposition on” (1.5.192), or others may have figured it to be an act of madness as a way to cover his schemes of showing King Claudius as guilty for murdering his father and punishing him due to his wrong doings. These suspicious acts of behavior and madness that comes from Hamlet has been believed to be an act of covering for his schemes. However, Hamlet cannot use this poor act of behavior as a coverup for his schemes due to the fact that both his true insanity and false madness is clearly very different.

Guilt, Madness and Innocence in Hamlet. (2021, Apr 26). Retrieved from http://studymoose.com/guilt-madness-and-innocence-in-hamlet-essay 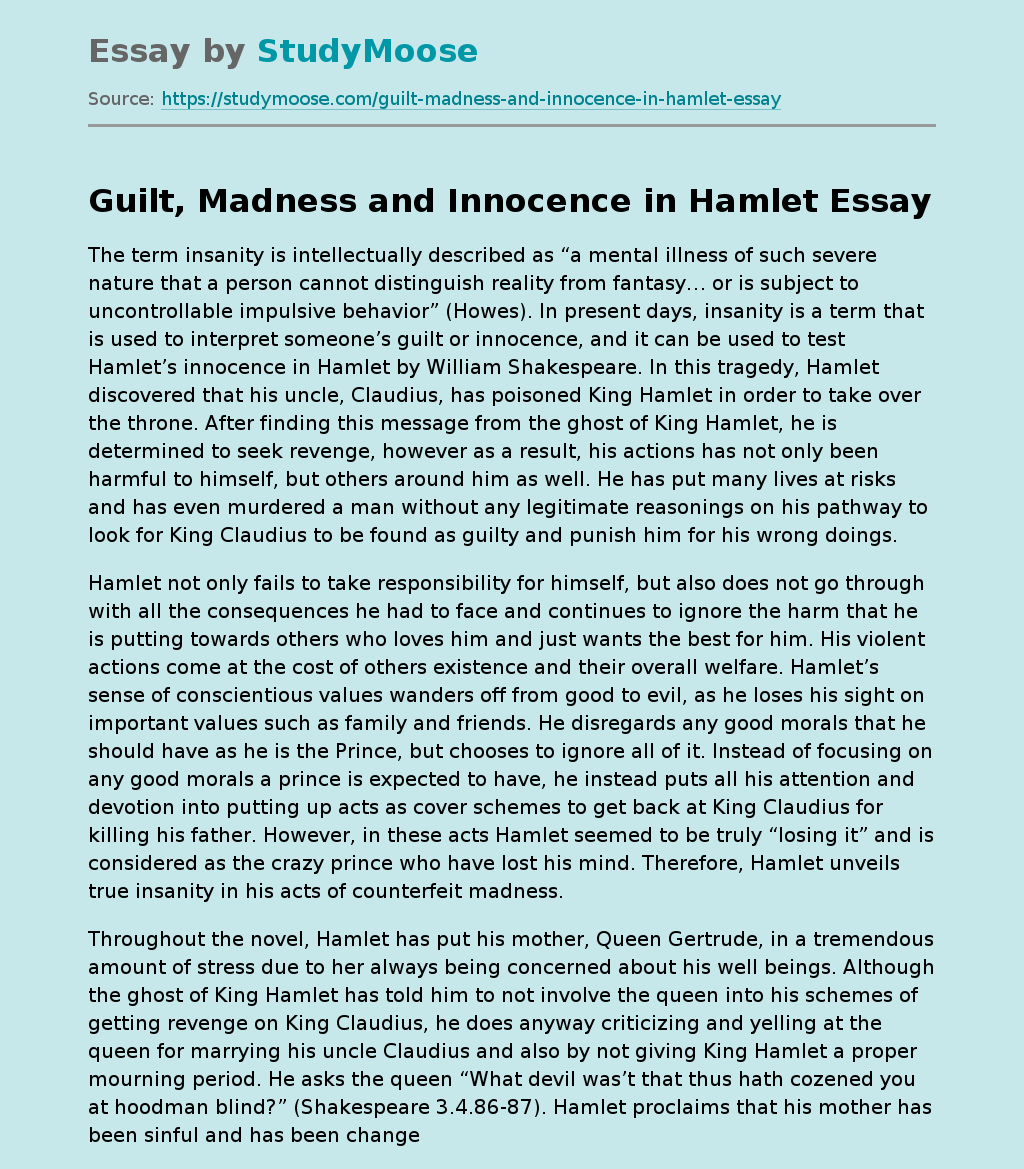