The period of Hamlet became a figure of exciting speculation and became a major role in the sum up of Hamlet. That being the spiritual agony of the individual alienated from society which was a close theme to Romantic sensibility. It was believed at the time if you had a deviance from the norm it meant that you had an illness which classed you as mad.

There are many interpretations of Hamlet ranging from Hamlet loving his mother known as the Oedipus complex and therefore how can he murder Claudius when he has already committed the deed he subconsciously wanted this idea was written by Ernest Jones which was first brought about by the philosopher Freud.

Don't use plagiarized sources. Get your custom essay on
“ Hamlet’s Madness Discussion ”
Get custom paper
NEW! smart matching with writer

Whereas on the other hand critics such as T. S. Elliot argued that the problem was the play itself and was an ‘artistic failure’.

There are different views on Shakespeare’s Hamlet such as Hamlet as a villain or a weak procrastinator, but the factor that I am going to discuss is the state of Hamlet’s madness, that being whether he is insane, partially insane or just pretending to be insane.

The mental state of Hamlet could be seen as unstable as he has had to deal with the death of his father, then a month later the remarriage of his mother to the new King, Claudius, his uncle. Following that he is then told by the ghost of his father that it was his uncle that murdered him ‘The serpent that did sting thy father’s life now wears his crown’.

He is now left with the heavy burden of taking revenge for his beloved father and comes up with the idea of acting mad as a front whilst he secretly plots his revenge ‘I purchase here after shall think, meet to put an antic disposition on’. In Act 2, Ophelia, his love describes him as mad. She tells her father ‘ Pale as his shirt, his knees knocking each other and with a look so piteous in purport as if he had been loosed out of hell to speak of horrors he come before me’.

She describes Hamlet’s extremely strange behaviour of pale as a shirt with his knees knocking, this leads to the actions of an insane person not that of a sane person pretending insane. From this we are lead to believe that Hamlet is would not act to the woman he loves as she is able to see the frightening look of dementia in his eyes. However the text does not give an idea of how Hamlet perceived his encounter with Ophelia. Therefore it is difficult to tell if Hamlet is truly insane or just frightened.

From Ophelia’s actions King Claudius and Polonius decide to set up an act to test the sanity of Hamlet and they send Ophelia to speak to him whilst they observe he then screams at her to ‘Get thee to a nunnery’ he is aware of her being sent to spy on him for the king, Hamlet is betrayed by the woman he loves and can only harm his exposed consciousness. A group of actors then arrive at the castle and Hamlet gets them to perform a play about his father’s death and in addition adds an extra scene to the script to observe the King’s reactions and find out if he is truly guilty.

However the King is appalled by Hamlet’s behaviour when he asks Ophelia ‘Lady, may I lay in your lap’, which he may be saying to prove his insanity, and due to this the King rushes from the court in disgust obstructing Hamlet’s plan. Polonius discusses Hamlet’s so called madness with the Queen but on Hamlet’s arrival is instructed to hide behind the curtain but when he believes the queen is being attacked he calls for help but is stabbed by Hamlet who assumes it to be the King, Claudius.

He then witnesses a reappearance of his father’s ghost to remind him of his role to take revenge and when the queen is unable to see this concludes Hamlet is mad. Hamlet is not the only member of the play to be seen as insane, as Ophelia on hearing of her fathers death is unable to come to terms with his death and becomes truly insane, she roams the halls singing and talks of the symbolism of flowers. In the time of Shakespeare her actions would be clearly construed of those of a mad woman but in today’s society due to our knowledge of psychology and emotions, we might conclude her having a nervous breakdown.

She then mysteriously dies leading to a discussion of suicide or an accident which is left unclear by Shakespeare. However Hamlets actions have angered his uncle, shocked his mother, killed Polonius and led to the loss of Ophelia and it is then when Claudius and Polonius’ son Laertes, formulate a plan to seek revenge on the revenger. They come up with the plan of a fencing match however Laertes; rapier is poisoned to ensure death by a small scratch. |During the match however Hamlet is grazed by the rapier ensuring his death, swords are then switched and Laertes is stabbed by Hamlet.

Gertrude drinks poisoned wine, but Claudius without incriminating himself watches his beloved with drink it and die before him, a dieing Laertes tells Hamlet of the kings actions who Hamlet in turn kills, he then admits to the dying Laertes of his madness ‘Roughly awake, I here proclaim my madness’, he has know finally admitted that he does have some madness within him but Shakespeare never specifies whether he is admitting to faking madness or whether it is true insanity he is proclaiming.

In conclusion, we are able to see that Hamlet’s madness does exist in many ways but Shakespeare denies us of any information causing us to form our own point of view on the matter. As a result of this Hamlet’s madness is defined from many different approaches however his madness is never truly established as true insanity.

The death of his father understandably angered him and may have turned to madness, or maybe he is mad with love or is just purely insane. There are many considerations to his madness when you read the play that makes you ask is he mad or not? In the play the characters have different opinions and therefore so do you, the reader. 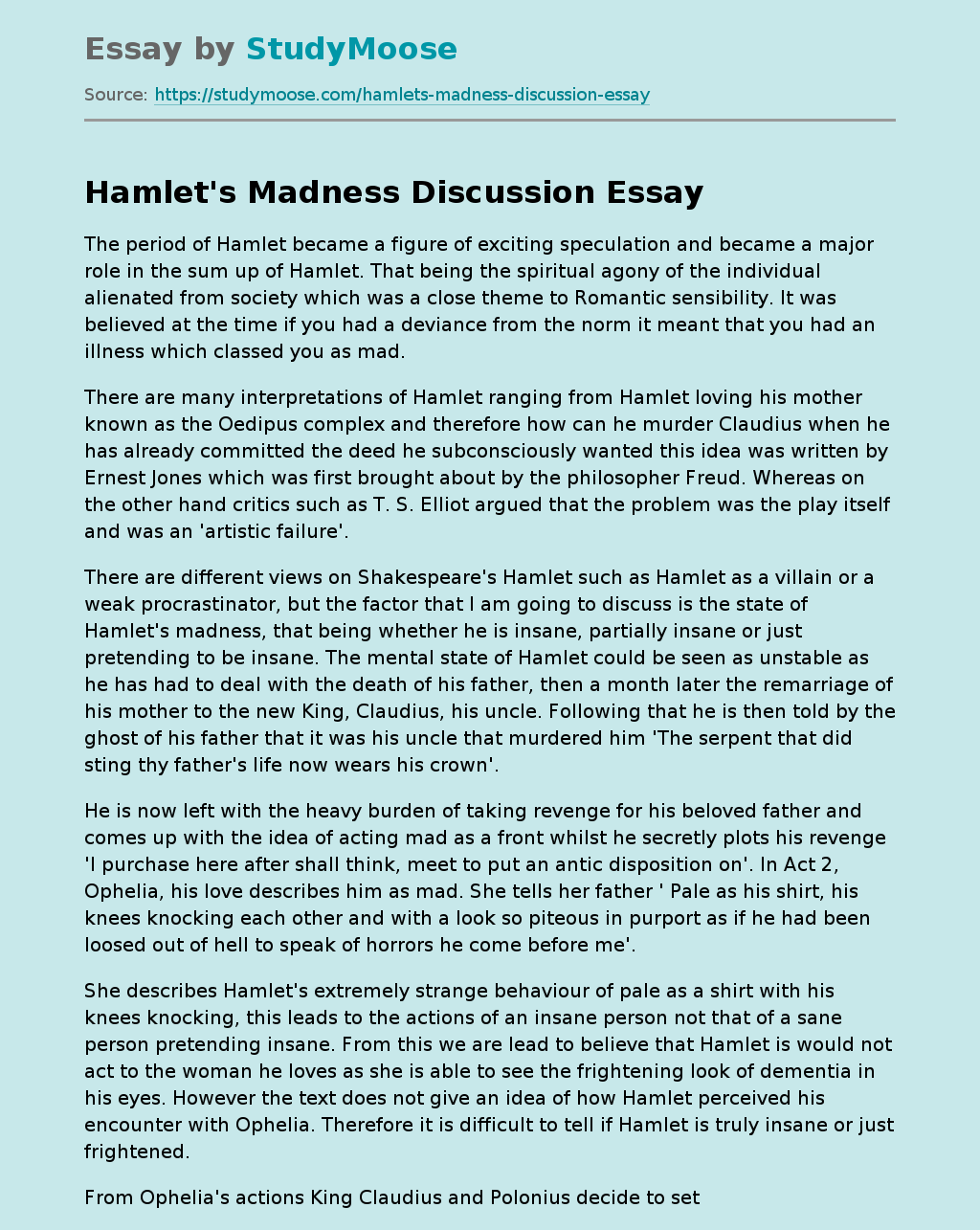