Decision-Making and Madness in Hamlet

It’s May 30th. The prom countdown has struck to 20 hours until pictures. Everyone is taking the day to relax- getting their nails done, doing overnight face masks and hoping their spray tan doesn’t turn orange. While I am doing these things, I still have one thing on my mind- what am I going to wear? By May, I had purchased 3 dresses that were all different styles and colors to wear that night. Welcome, it is nice to meet you, I am indecisive.

Don't use plagiarized sources. Get your custom essay on
“ Decision-Making and Madness in Hamlet ”
Get custom paper
NEW! smart matching with writer

While I have never had to make the decision if it was the proper time to stab my stepfather-uncle with a dagger, I have my fair share of moments when I just can’t seem to make a choice. Shakespeare’s character Hamlet has a similar dilemma. The focus of the theme of decisions in the play was close to the way I struggle with decision-making. It was not about the decisions he, or any other character should make, but rather whether they will be able to make any decisions at all.

Hamlet’s future and the future of other characters would have turned out differently had he not only thought and made decisions in a meaningful and knowledgeable way, but acted on those thoughts too. Sometimes our inner feelings can be biased. We can want what we think is best for ourselves, or even people closest to us. Hamlet feels very strongly about avenging his father’s “most foul, strange, and unnatural murder’ (I, V, 25). When the ghost of King Hamlet reveals that Claudius murdered him, Hamlet contemplates it for quite some time.

He might not even fully trust the ghost’s proposal and wishes. He even ponders when the proper time kill his new stepfather would be. Unfortunately, Hamlet did not go through with this plan, concluding “now I might do it, now he is praying, And now I’ll do’t. And so he goes to heaven, and so I am Avenged” (III iii 75).

Even with all the reasons against Claudius being guilty, Hamlet quite literally cannot pull the trigger. Instead, he thinks and overthinks about the action. Hamlet decides the proper time would be “when he is drunk asleep, or in his rage, or in th’ incestuous pleasure of his bed” (III iii). On the surface, it seems that he waits because he wants an act of more radical revenge. As previously disclosed, Hamlet avoided the act by deciding it wasn’t the proper timing. He wants to know that Claudius’ punishment will be sufficient. He is waiting for a time that “the outcome of a decision is known and that the decision that results in the greatest good for a greater number of people is the best” (Glutchman 1).

Sending Claudius straight to heaven is not the most vengeful act he could do, and he realizes it. He waits and contemplates exactly when he should act on his thoughts. For me, choosing between colleges was the first real, adult decision I made. By that I mean it was the first time I decided something that the whole rest of my life depends on, but that’s another story. Because of my own indecisiveness, it is pretty easy for other people to manipulate my thoughts and decisions by telling me their own opinions. I was really hoping I only got accepted into one school, so the cosmos would guide me, but I ended up getting into every single one I applied to.

You may view it as an accomplishment, but to me, it was the worst possible outcome; I had to choose for myself. I ended up buying 4 ginormous, like huge, poster boards and crafted my own pro/con list for each school. One day when I was just blindly staring at my options, my mom walked into my room, and questioned why I was even considering attending the University of Tennessee, because god forbid I traveled more than 60 miles for school. I knew my parents would eventually support whatever my decision ended up being, but I also knew they thought I was incapable of doing it myself. They probably even think my mind is “too narrow” (II ii 272) for making adult and potentially life-changing decisions.

When Rosencrantz says this to Hamlet, he knows Hamlet is acting strange, and it is a reflection of his mental state. He seems to struggle to grasp the larger concepts of the outcomes of his actions. Although not through poster boards, Hamlet has his own way of contemplating decisions and actions. The first few words of the famous “to be or not to be…” (III i) soliloquy establish his thoughts and is a reflection on life itself. This soliloquy questions life, ponders death, and has Hamlet caught in a glut of decisions about his own. Hamlet seems to make a judgement that “conscience does make cowards of us all” (III i). It is not just about killing himself in this reflection, but also about avenging his father’s death, and listening to what the ghost said. His mission is killing his father’s murderer, and he cannot bring himself to do it. Throughout the play, he makes excuses for not killing him. Even when has a million reasons to trust the ghost, and has a chance to kill his father, he turns away.

At the end of the soliloquy, he decides that too much thinking about the action of killing his father is the only thing that will prevent it from happening; his conscience is keeping him from doing what he needs to do, and is the issue that is making him turn away. It is no secret that Hamlet planned to act a little odd as part of his plan to avenge his father. Mental illnesses, such as anxiety, definitely were not as widely accepted in Shakespeare’s time. In modern times, faking an illness, such as telling your friends “how strange or odd some’er I bear myself…that you know aught of me” (I, V, 190), is identified as its own mental illness.

Because Hamlet acts crazy, he might able to convince himself he really is. Through research today, there are many reasons to believe indecisiveness stems from issues such as “anxiety, fear of making the wrong decision and suffering consequences, and feeling guilty, remiss, exposed or ignorant” (Barron MD 1). Back in the Elizabethan era, an illness like anxiety was viewed as “mad”. I am not a doctor, but it can be said that if he is convincing himself he is crazy, it might stem from some sort of “madness” which is why it makes it harder for him to make choices promptly. Of course, with modern medicine and research, it is easier to link mental illnesses together, and the way people act because of them.

Based on this research, it is easier to conclude Hamlet really might have actually been “mad”. He may have even been able to convince not only the surrounding people, but himself that his fake madness was real. This may be why he struggles with even making any choices at all. Through Hamlet, we learn the decisions we make, and when we make them play a vital role in our lives and futures. Some decisions may be small, and require no thought. Others are larger, and it may be wise to “trust your gut”, or “follow your heart”. Some require 4 poster boards and pro/con lists. Knowing Hamlet’s fate and inner thoughts, it is safe to say that if he acted on the way he felt, in a meaningful and knowledgeable way, the entire play’s outcome would change.

And, you may be wondering, do you know what you’re wearing to prom this year? As a matter of fact, I am choosing between two dresses.

Decision-Making and Madness in Hamlet. (2021, Apr 26). Retrieved from http://studymoose.com/decision-making-and-madness-in-hamlet-essay 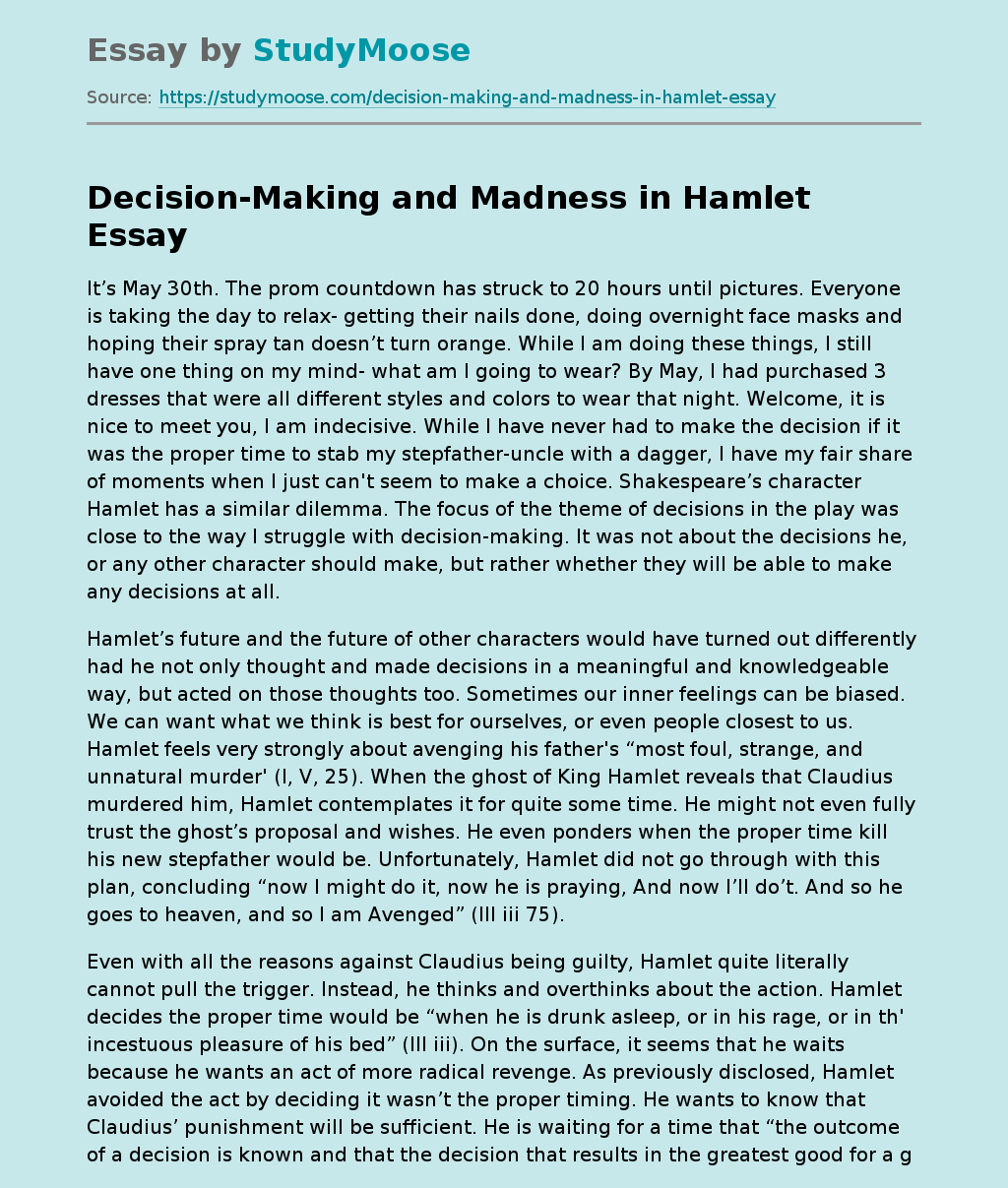