Good and Evil in Beowulf

The story of Beowulf was probably composed in England sometime in the Eighth Century AD, and written down circa 1000 AD, by a literate scop (bard) or perhaps a Christian scribe who was possibly educated in a monastery. The poem was created in oral tradition and was transferred to writing over time. It had its roots in folk tales and traditional stories until some very talented poet put it in something very near to its current form. The poem was more than likely performed for audiences at court or on the road as the scop found audiences to support him.

Don't use plagiarized sources. Get your custom essay on
“ Good and Evil in Beowulf ”
Get custom paper
NEW! smart matching with writer

It was sung or chanted rather than recited it, and usually to the accompaniment of a harp. There was a constant struggle between good and evil in the story. Beowulf, God, and Wiglaf represented good in the poem whereas Grendel, his mother, and Cain portrayed the contrasting side of evil. Beowulf and Grendel represented the ultimate struggle of good and evil. Grendel tried to destroy everything around him while Beowulf tried to do good all the time.

The first battle between Beowulf and Grendel, Beowulf was God (good) and Grendel was Cain (evil).

This was actually an allusion from the Bible, the story of Cain and was used to compare God’s feelings of Grendel, a descendant of Cain. The book stated, “…Since Cain had killed his only / Brother, slain his father’s son / with an angry sword. God drove him off, / outlawed him…”. Cain killed his brother because he was evil and God shunned and marked him for his evilness.

God used his wrath to take care of Cain. God had the same feelings for Grendel.

Grendel was described as a vicious monster that was an offspring of everything evil, God refused to forgive Grendel and favored Beowulf’s pride over Grendel’s sins. In the battle, God granted Beowulf overwhelming victory. The book stated, “The Ruler of the heavens brought about a right issue, when once more he stood up with ease. ” God stood with ease because the beast he hated, Grendel, was dead. Beowulf was a mighty, honorable hero who had super strength and the ego to match his strength. He defeated Grendel with his bare hands, and then he fought Grendel’s vengeful mother.

Tired and torn, Beowulf, through his goodness, was able to vanquish Grendel’s mother. , At the brink of exhaustion, Beowulf grabbed a monstrous sword and the book continued, “he struck furiously the blade went straight through the doomed body. ” This was the perfect example of goodness. The story of good and evil was told from the beginning of man’s existence. Beowulf, revealed how this was evident and explained the side of good as depicted in the hero Beowulf. Evil was personified in Grendel, Beowulf’s, opposite, the man-eating beast that terrorized humanity.

As long as the delicate balance of good and evil was recognized the characters in the epic related to the concept of good and evil. Good won out every time there was a contest because God wanted good to prevail. Beowulf showed how good was related to evil. This story represented these qualities in both main characters. The struggle began when God allowed Satan dominion over the earth. The battle between them had been recorded throughout literary history. Some of the heroes that had challenged Satan did so to protect the weak. Others fought for fame and glory.

The theme of good vs. evil that was present in the story of Beowulf, it became the classic foundation of many modern stories. Beowulf and Grendel represented the ultimate struggle of good and evil. Grendel tried to destroy everything around him. To Beowulf, this was another conquest. It allowed him to do yet another good deed that people talked about for a long time. Beowulf represented God and Grendel was Satan. The struggle between God and Satan had existed throughout time. Beowulf was all that was good, moral, and ethical. He lived by the rules of God.

Grendel denounced those rules to live by his own. Thinking only of that which gave him pleasure, he attempted to destroy everything good and kind. Truly, Beowulf was like a parent and Grendel was like a child whom he chastised. Beowulf displayed a variety of things that the Anglo-Saxon people valued; many of those traits were expressed through the main character, Beowulf. In him, was seen the qualities of courage, loyalty and a thirst for fame. The character and story also had one running theme throughout, the age-old subject of good versus evil.

Beowulf was the epic hero of this poem. He embodied all the characteristics that a hero should, such as bravery, loyalty and strength, both physical and mental. He was the archetypal hero. He fought for good and represented it as well. Beowulf signified good, but there was a contrasting evil to complete the balance. The monster Grendel and his mother were that evil. The mere look of them left the impression of fear and sin. “He strode quickly across the inlaid floor, snarling and fierce: His eyes gleamed in darkness, burned with a gruesome Light.

” Their wickedness seemed to spread to their home, infecting the lake in which they lived. “A deer, hunted through the woods by packs of hounds, a stag with great horns, though driven through the forest from faraway places, preferred to die on those shores, refused to save its life in that water. ” This signified good and evil. Beowulf confronted the monsters and defeated them. (Baldwin, 99). With each of the characters representing good and evil respectively, Grendel’s defeat clearly symbolized Beowulf and his goodness overcoming the beasts’ wickedness, just as we would view Christ defeating Satan.

Throughout history and in endless fairytales, good was always victorious over evil. The white knight always defeated the dragon. This was no exception with Beowulf. Though the poem ended in his demise, Beowulf was remembered for being the hero that saved his people from the evils of their world. In conclusion, in the epic Beowulf, there was a constant struggle between good and evil. Beowulf and Grendel represented the ultimate struggle of good and evil. Grendel tried to destroy everything around him while Beowulf tried to do good all the time.

Good and Evil in Beowulf. (2016, Nov 11). Retrieved from http://studymoose.com/good-and-evil-in-beowulf-essay 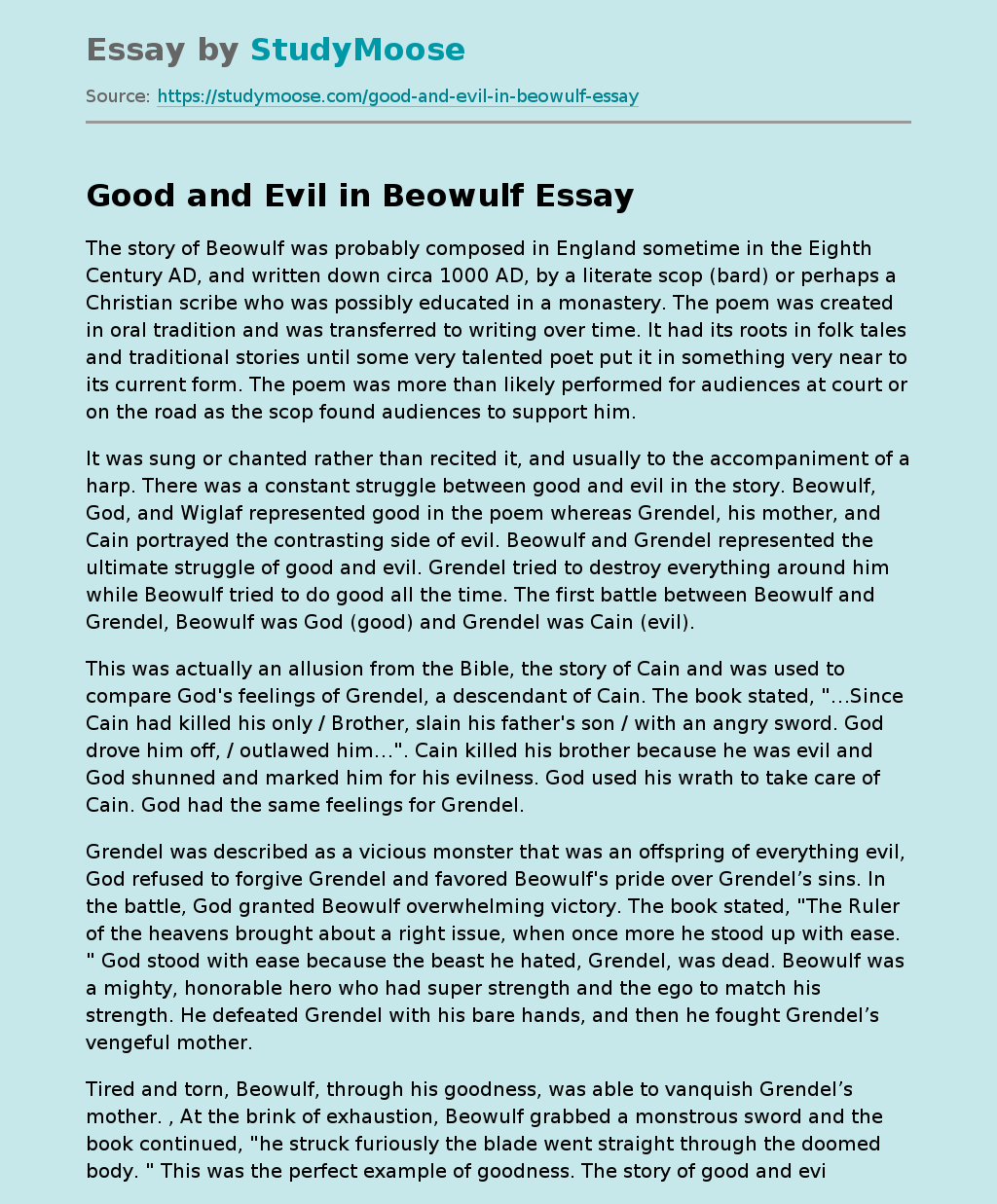