Throughout The Picture of Dorian Gray, Dorian Gray struggles with the desire to stay forever young. Because of all the hardships he experiences throughout his life in order to achieve this he loses his innocence along the way and eventually all of what he has done catches up to him and leads to his suicide. To him, youth is the only thing that has any importance and he does all that he can in order to maintain youthful without understand the repercussions of his actions until it is too late.

Don't use plagiarized sources. Get your custom essay on
“ Dorian Grey’s Desire for Youth ”
Get custom paper
NEW! smart matching with writer

One scene that clearly displays Dorian’s decision to choose beauty over his innocence is when Dorian brings his friend Basil to the room where he keeps his portrait. He shows Basil the portrait and how hideous it has become despite Dorian’s unchanged appearance. Basil then realizes that the painting was a work of his own and then he asks how it has become that way. Dorian explains that gave up his soul for eternal beauty.

Basil then tries to convince Dorian to pray for forgiveness because he believes that the painting is an awful lesson but Dorian claims it is too late. Once Dorian looks at what has become of him in the portrait, he grabs a knife and stabs his friend to death. The next day he is still bitter about how Basil reacted to his portrait; the lack of remorse clearly shows that he has no innocence left to him.

This shows that Dorian is relentless by trying to stay young forever because it shows that he favors his appearance more than his friends.

Basil was the man that gave the painting life, and in the end it brought his own life to an end because Dorian became obsessed with it. His innocence was lost with this act, and he just continues on with his life as if it was nothing. He becomes a changed man, and not for the better.

Another scene in which Dorian loses his innocence by choosing beauty is when Dorian goes to see his fiancé perform and notices how bad she is that night. When he confronts her about it she claims she no longer can connect to the roles she plays because their feelings of love are nowhere close to those of hers towards Dorian. Once she says that she is quitting acting Dorian is horrified and realizes that he only loved for the beauty she portrayed on stage and not for her herself. He breaks off the relationship with her and tells her he never wants to see her again; she ends up killing herself that night before Dorian can apologize the next morning.

At the moment of confrontation, Dorian easily chose beauty over the innocence of true love. Again, it is apparent that his of total lack of regard towards the consequences of his actions. Yes, he did realize that what he did was wrong because of the smirk that developed on his portrait, but it was only after it was too late. Lord Henry once said to Dorian that, “The only way to get rid of a temptation is to yield to it. Resist it and your soul grows sick with longing for the things it has forbidden to itself, with desire for what its monstrous laws have made monstrous and unlawful.” (Wilde 21). This quote relates back to the main theme of the loss of innocence due to the desire of beauty because what Lord Henry meant by this quote is that he suggests that even Dorian’s pure, innocent young life is secretly full of hidden, shameful desires. Basically, he implied that regardless of the innocent face Dorian has, he lost his innocence long ago.

The loss of innocence due to the desire of beauty is deeply intertwined throughout Dorian’s endeavors. This is supported by many details and scenes that Oscar Wilde describes. It is agreed that this book is about the power of beauty and how innocence is given up when someone favors beauty over it. Some may even argue that Dorian Gray lost his innocence even before the portrait because at the beginning, he was somewhat manipulative and went through life just for the experiences. This point of view is easily agreed up by this simple quote; “How sad it is! I shall grow old, and horrible, and dreadful. But this picture will remain always young. It will never be older than this particular day of June… If it were only the other way! If it were I who was to be always young, and the picture that was to grow old! For that-for that-I would give everything! Yes, there is nothing in the whole world I would not give! I would give my soul for that!” (Wilde 29) 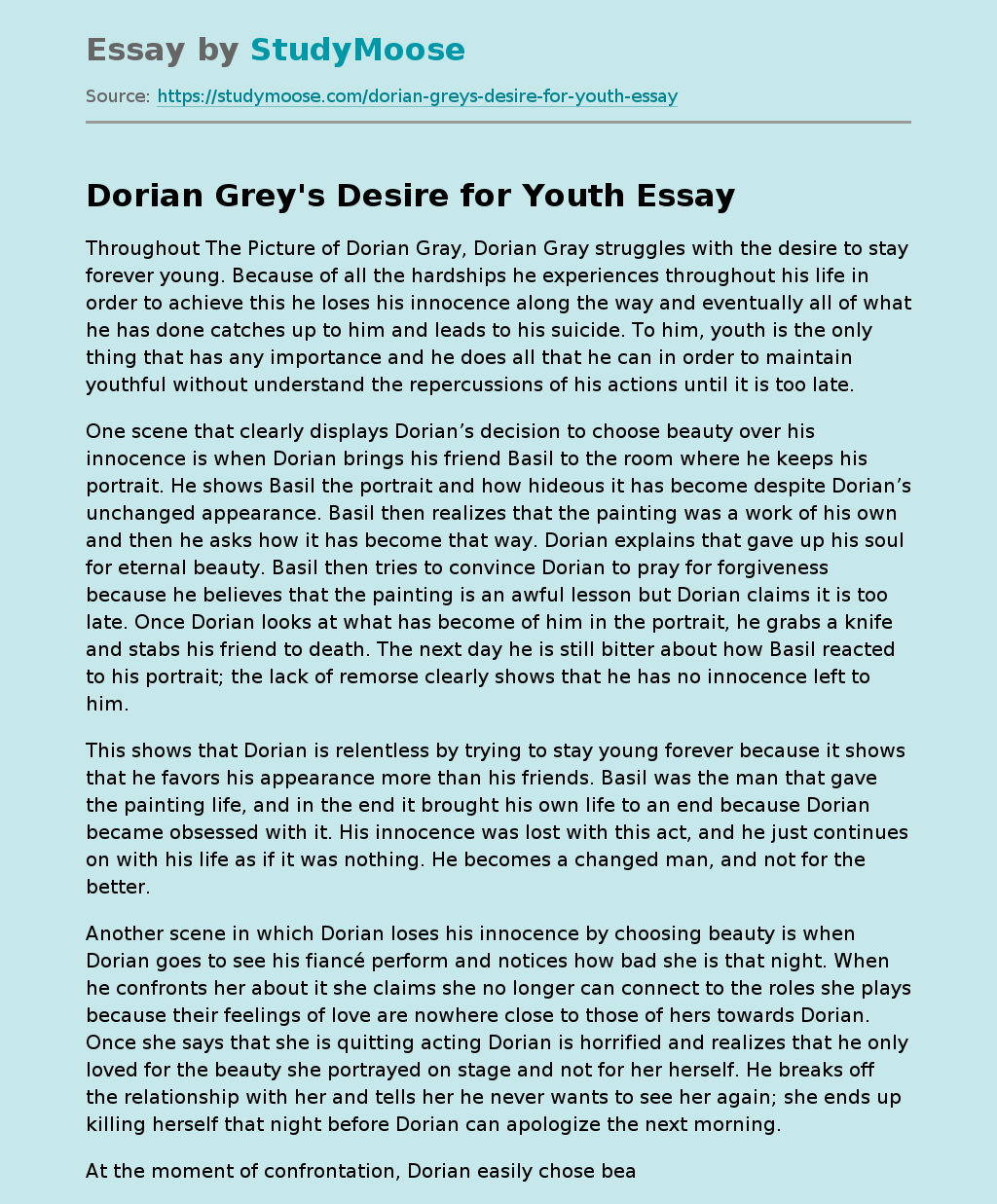