The Color of Innocence

In the context of “The Picture of Dorian Gray,” one of the most noticeable and important motifs is that of the color white and its variants, including, but not limited to, pale and listless. The meaning of this color evolves as the novel progresses, changing in relation to Dorian’s character. While the motif may never physically alter in appearance, it succeeds in reversing meaning completely, signifying the great contrast in Dorian’s soul between the beginning of the novel and the end.

Don't use plagiarized sources. Get your custom essay on
“ The Color of Innocence ”
Get custom paper
NEW! smart matching with writer

In the very beginning of the novel, as Basil speaks of his first encounter with Mr. Gray, he notes that when their “eyes met, I [Basil] felt that I was growing pale” (9). The motif comes to signify a sort of timid transparency; as if Dorian’s purity softens everything around he comes into contact with. Similarly, Lord Henry employs the motif when describing Dorian’s youth, labeling it as his “rose-white boyhood” (21). Shortly after, Dorian is described as possessing “the white purity of boyhood” (37).

Proficient in: The Picture of Dorian Gray

In both of these passages, the motif represents its most basic connotation, that of innocence, particularly, the innocence of youth. White gives Dorian’s appearance a sense of vivacity. Lord Henry describes Dorian’s soul as having “turned to this white girl [Sibyl Vane] and bowed in worship before her” (57).

The motif denotes a youthful purity or vitality in Sibyl Vane’s soul, most likely one that is shared by Dorian Gray. Her innocence soon grows to incorporate innocent affection for Dorian, as after kissing him, “She trembled all over, and shook like a white narcissus” (74).

The motif has not reversed its meaning at this point; rather, it incorporates a virtue similar to youth and innocence, that of love. Furthermore, as Sibyl Vane performs onstage, Dorian tells how “Her hair clustered round her face like dark leaves around a pale rose” (74).

The complexion in Sibyl’s face suggests a pure exquisiteness that embodies everything desirable to Dorian. He has employed the motif in describing Sibyl’s youth, innocence, passion, and beauty, all of which seems to mirror Dorian’s face and soul, as is evident in Basil’s description of him. The motif’s meaning has reached the climax of goodness here, signifying qualities Oscar Wilde holds in highest esteem. However, it does not occupy this position for long, as the ensuing events begin an extensive bastardization of the color’s significance.

As Sibyl Vane performs as Juliet in front of Basil and Lord Henry, “The curves of her throat were the curves of a white lily…yet she was curiously listless” (81). In this performance Sibyl retains her physical beauty, yet her vitality has escaped her. In a single sentence the motif revolves to a negative connotation, coming to suggest a vapid emptiness where there had previously been such fervent life. Sibyl, whose apparent perfection and talent once embodied the motif, has become to Dorian “A third-rate actress with a pretty face” (85). Her disappointing showing, an obvious contrast to previous performances, succeeds in deeply affecting Dorian’s definition of the motif as well, as “Dorian Gray grew pale as he watched her” (81). Later, as he rescinds his love for Sibyl, “He looked proud, pale, and indifferent” (83).

A word used only pages before to describe the beauty of a rose has changed in such magnitude to be grouped alongside such words as ‘proud’ and ‘indifferent.’ The motif utilized in the illustration of Sibyl’s unhindered affection is now used to depict Dorian’s lack of love altogether. Deeply wounded by Dorian’s tirade and exclamation of nothing but distaste for her, “The girl [Sibyl Vane] grew white, and trembled” (85). Whereas Sibyl had previously taken on such a color and shuddered after sharing her first kiss with Dorian, she does it here in response to losing Dorian’s love. The motif changes from signifying passionate ardor to passionate sadness and fear. A color that gave Sibyl a reason to live her life to the fullest quickly steals her will and pushes her to take her own life. It is represented in a literal sense as well, as Lord Henry describes the instrument of her death as having “either prussic acid or white lead in it” (96).

Distressed by Sibyl’s untimely death, Dorian muses, “Can they feel, I wonder, those white silent people we call the dead?” (96). As opposed to describing liveliness, or beauty, the motif is associated with that of a corpse. Basil refers to Sibyl Vane’s body similarly, proclaiming, “Why, man, there are horrors in store for that little white body of hers!” (105). However, as opposed to Dorian, Basil’s use of the motif preserves the purity of Sibyl Vane, recognizing her innocence as a person. Only Dorian’s perceptions have changed on the meaning of the color; it has become something sinister and deathly to him, as if the color’s meaning and significance died along with Sibyl Vane.

Lord Henry purports that a long term relationship with Sibyl Vane would have been futile, and Dorian agrees, saying, “‘I supposed it would,'” as he was “walking up and down the room, and looking horribly pale” (97). As Dorian’s value for human life recedes, and his soul darkens, one would expect his face to dim as well, as it would have developed the lines and shadows accompanied by such nature. However, this motif’s connotation, much akin to the portrait’s appearance, has been forced to change while Dorian stays the same. Later, when Basil insists upon seeing the horrible portrait, Dorian responds, “‘Basil’ he said, looking very pale, ‘you must not look at it. I don’t wish you to'” (108). Basil turned pale upon first meeting Dorian, implying a shy fear of the boy’s pure livelihood. Here, when Dorian’s secret is threatened, when his evil soul is in danger of being revealed and he exhibits a similar reaction, it becomes clear that whatever fear Basil experienced earlier is much different than the fear Dorian is experiencing now.

Basil grew afraid out of reverence, while Dorian grew afraid out of shame. While the motif was previously synonymous with purity, it has adopted a sinister, calloused meaning with Dorian. Further on, Dorian “would place his white hands beside the coarse bloated hands of the picture, and smile. He mocked the misshapen body and the failing limbs” (124). In 19th century England, white hands were a sign of aristocracy, and beauty. However, when juxtaposed with the awful vileness of the portrait and Dorian’s soul, they seem wicked, and deathly. The motif changes meaning not only in Dorian’s eyes, but also in the reader’s eyes as well.

A while after this, “pressed against the window of the conservatory, like a white handkerchief, he [Dorian Gray] had seen the face of James Vane watching him” (190). Although Dorian was not aware of James’ promise to kill him, he understands James’ purpose for being there. The motif, thoroughly transformed in meaning by now, is a brooding symbol of death that Dorian has come to fear. Dorian returns to the party after seeing James, and “As the thought crept through his brain, he grew pale with terror, and the air seemed to him to have become suddenly colder” (192). Dorian’s fear of death mirrors James’ lust for death. The passion Dorian first had for what this color signified has turned into a loathsome fear of all it embodies.

Dorian Gray’s static appearance can do nothing to stop the transformation of the world around him, or, more importantly, his soul. The color white becomes a motif in the novel that mirrors Dorian Gray; its appearance remains the same, yet as the story progresses, it begins to convey a meaning much less innocent than early on. The juxtaposition between the whiteness of purity early on and the whiteness of death in the end gives the reader a clear idea of the evolution of Dorian’s soul, and in doing so, it provides a concise understanding of the plot as a whole

The Color of Innocence. (2016, Jul 27). Retrieved from http://studymoose.com/the-color-of-innocence-essay 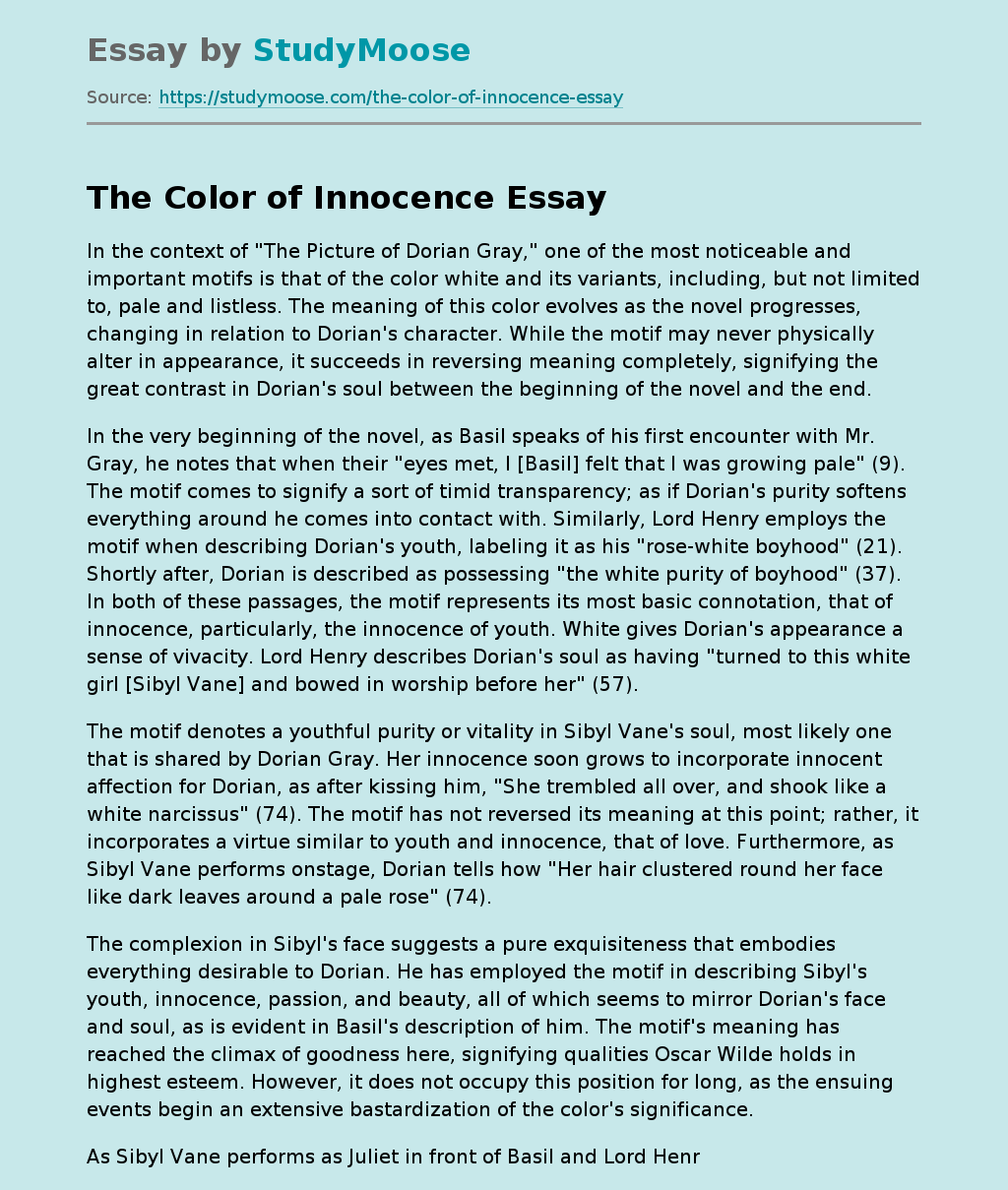