The Relationship Between Good and Evil in Beowulf

Throughout Beowulf I have been intrigued by the theme of good and evil and their relationship. Primarily how there are a number of different ways to think of the relationship between the two. I think that in Beowulf there are many interesting ways that evil and good are portrayed. For the most part Beowulf represents good/ heroes and then there are three main representations of evil that Beowulf faces. One thing I realized about the relationship between the two is that you could not have one without the other.

Don't use plagiarized sources. Get your custom essay on
“ The Relationship Between Good and Evil in Beowulf ”
Get custom paper
NEW! smart matching with writer

For example, the reason that Beowulf becomes so well known and famous is because he defeats an evil demon (Grendel). A hero is someone who possesses a vast amount of courage and someone who is known for overcoming a certain obstacle(s). An evil figure is often the obstacle that the hero must over come; it is someone or something that is often thought of as immortal and feared by the public.

Without Grendel or any short of evil figure, Beowulf would not have made a name for himself. When it comes down to it; evil is what makes someone a hero.

In this story, the idea of evil is presented through the three monsters and the action of killing, the idea of good is represented threw Beowulf and comitatus. Universally, pretty much all folk tales, stories, and epics that involve good and evil are about the two battling it out. It is a way of enhancing the story, no one wants to hear a story about a hero achieving a goal easily, the idea of a challenge and struggle is what really interests people.

In Beowulf it is more that Beowulf is defending the people from the evil.

It is not a pleasant scene when Grendel comes storming into the mead hall; he starts attacking everyone and everything, killing many in the process. Beowulf makes a boast that he will defeat Grendel in battle, but it also seems he just defends the peace of the community at hand, “So times were pleasant for the people there until finally one, a fiend out of hell, began to work his evil in the world. Grendel was the name of this grim demon. ” (99-103) An interesting question to ask is how do you know who is the hero and who is the evil figure?

In real life there is no one side to anything. Some people may consider a person a hero and some people may consider that same person the evil figure. It is all about putting it in too perspective, and who the “hero” is benefitting. For example, Beowulf is a hero to the Danes because he defeats Grendel and that bennifits them because it means they are safe for the mean time and will not be disturbed by Grendel again. Later though in the epic, Grendel’s mother battles Beowulf, and for what reason? She was avenging her son. Avenger a lost love one, seems like something a hero might do.

So you cannot say that Grendels mother’s reasoning was very unreasonable, because in the end she was just honoring her son, in that sense Beowulf could even be considered the evil figure, its just all about perspective. Really though Beowulf it would be hard to imagine Grendel, Grendel’s mother, or the dragon as anything else except evil and monstrous, but too some in the story these characters may not be considered evil, so too sum it up, at first it may seem very straight forward too who the “good guy” is and who the “bad guy” is, but in the end the line between good and evil can often get blurred.

Without a hero you could not have evil, with out evil you could not have a hero. Although we look at good and evil as opposites they need each other to define one another. A hero needs to conquer some sort of evil to earn the title of a true “hero” and Beowulf is a perfect example. Once he defeats Grendel the Danes adore him, he achieves a task that appeared near impossible. When he does end up finally defeating Grendel he earns the title of a true hero.

Beowulf and Grendel are similar in the sense that they share a very similar level of physical strength and this is true with all the monsters Beowulf faces. All of the monsters are very evil and immortal, with Beowulf, since he has such grand power he is also thought to be a little bit immortal in some senses, “The monster wrenched and wrestled with him but Beowulf was mindful of his mighty strength, the wondrous gifts God had showered on him: He relied for help on the Lord of All, on His care and favour.

So he overcame the foe, brought down the hell-brute. ” (1269-1274) So another characteristic that Beowulf and these monsters share are that they are all not normal human beings, they all share some sort of paranormal power and strength, which could either be very good or very bad depending on how one utilizes them. I find the idea that Beowulf and the monsters have similar traits and characteristics very interesting, because their power is what makes them similar but what separates them is how and what they actually use that power for.

Like Uncle Ben once said in Spiderman “With great power, comes great responsibility. ” When it comes down too it, it is about who has more moral strength, between the hero and the evil figure who is going to use their power for “the right thing”. Beowulf lives a life of greatness and glory, he gets known as a hero and he dies a hero. When he fights the dragon, it seems that that is the way he would want to die, defending the community.

Too be a hero you must take risks, risks that may be considered by the average person too dangerous to even consider taking. Although, these risks are not always about fighting a monster. Heroes do not always come in such an obvious form; some one does not have to have godly strength or any kind of super power to be a hero, most heroes are the every day people. A hero does not have too kill a demon beast or save millions, a hero is just someone who is willing to make a difference, no matter how big or how small.

The Relationship Between Good and Evil in Beowulf. (2016, Nov 12). Retrieved from http://studymoose.com/the-relationship-between-good-and-evil-in-beowulf-essay 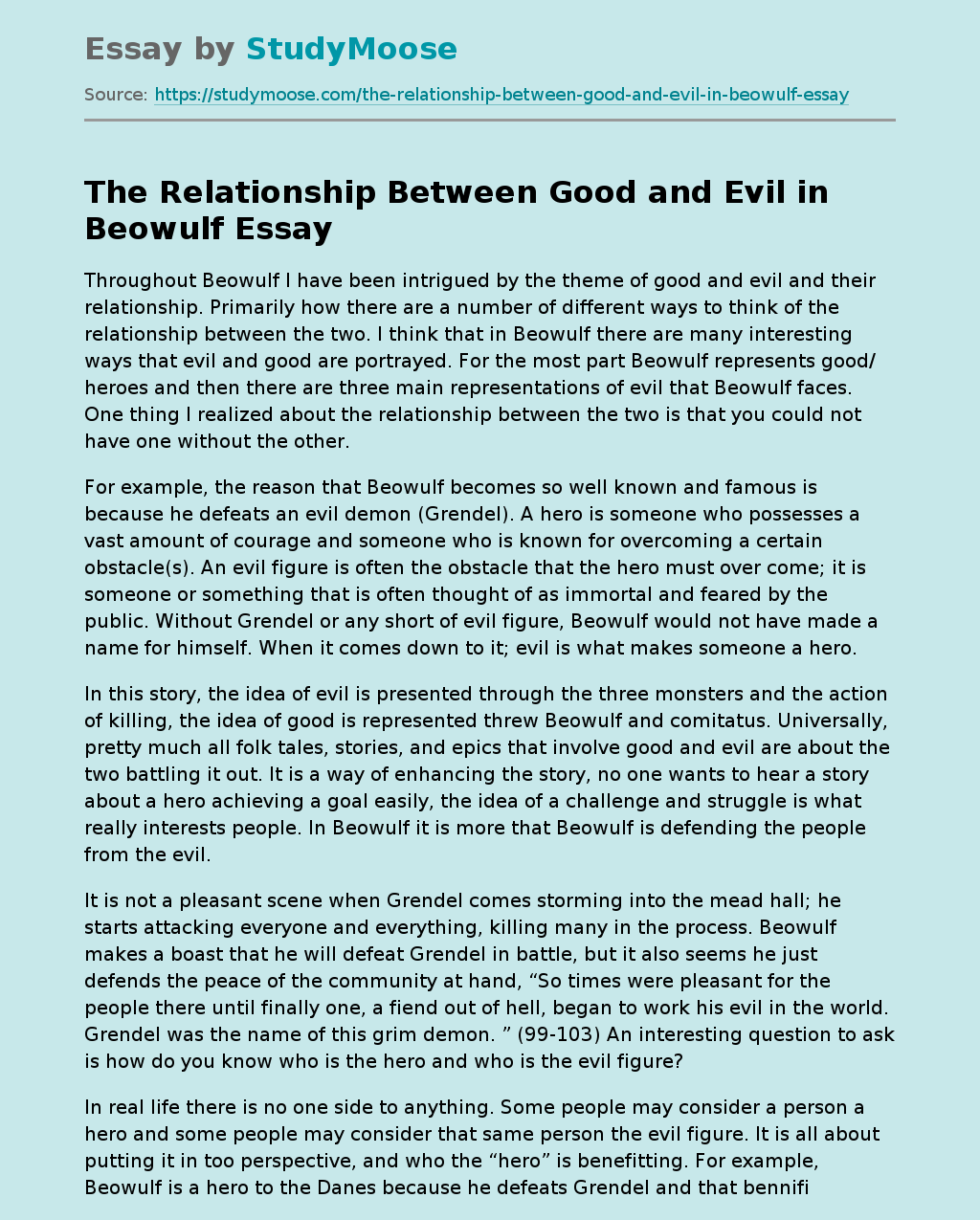