I agree on this part, when Amy blames the myth of the ‘Cool Girl’ for her unsuccessful relationship with her husband, Nick. Although, she is always intelligent and successful girl, since her childhood, there is a major problem with Amy and that is also the cause why her married life is not good; she is fake, whatever she does are not real. She tried to portray herself as a Cool Girl, she tried to be a kind of Girl that her husband would like.

Don't use plagiarized sources. Get your custom essay on
“ Gone Girl ”
Get custom paper
NEW! smart matching with writer

She did her best to be a Cool Girl, and that was the problem, she tried to be someone she is not or may be, she can’t even. Finally, when she realized that her personality is all fake and invention, she stopped pretending to be as a Cool Girl. And her marriage relationship fell apart. I think, we can blame both Nick and Amy for their unstable relationship. Also, I am not sure, but I feel like Amy Dunne have kind of personality disorder, she was facing problems to control her emotions and views and her behaviors were impetuous as well.

she was also kind of egocentric person with lack of sympathy and scheming. For once, I also viewed her character as a psychopath or her mind was similar to one. I mean, what kind of character she has, someone who would plan to punish her spouse the way she did in the novel, just because he cheated her. A normal mind would not have such kind of thoughts.

She would do anything to control people, that might include lying or even killing someone. She tried to portray herself as a savior of her husband, Nick. Her thoughts were not healthy, and they were dangerous. She was obsessed to control others and she was enjoying being ‘Amazing Amy’. I personally do not think that the word ‘Amazing’ really suit her. I agree that she is intelligent with sharp mind, however her character does not make her amazing. I think, amazing Amy is just for making women feel jealous. She is a perfect example of spoiled single child. Although, her parents were both psychologists, they could not handle or control her unstable and unhealthy behaviors.

Nick Dunne appeared as so many different characters throughout the book. I am confused whether to have sympathy towards him or not. From one point, I feel pity knowing about his sad childhood and his father matters. His character and personality had lot of twists and confusing. As we all know, that he was a liar too. He created fake story when Amy disappeared. Even though, later it was exposed that he did not kill Amy, I think still, he is not reliable. However, he was trying to be one. In my view, Nick is also responsible for their unstable marriage and the main reason is he is weak. Being as a man, I think he does not show any of the manly behaviors throughout the novel. Although, the major reason of their marriage was Amy’s fake personality, but Nick was not honest as well. He cheated Amy. If he wouldn’t cheat her, she might not be such a horrible person. Both of them were liars, things were in balance. But, his one mistake ruin everything and Amy turned out as an evil. He was not a child anymore, but his childhood was disturbing him and his behaviors. I obviously feel pity by knowing that his father was abusive, and his relationship with father was the main reason of being him. His father’s role in his life was ruining him and messing things up. But I wonder, how come he became weak, even after his tough childhood. How come a girl blackmailed and threatened him in the name of pregnancy. I understand that after living his childhood, he just did not want to be like his father. He said, ‘·I could be a different kind of father that my dad was. That I could raise a boy who wasn’t like me’. But the thing is, he could find some other options to be a good dad and raise his kid, even after quitting Amy. I think somehow, he tried to create himself as a loving person, when he said, “Loving her made me superhuman, it made me feel alive”. However, His main problem was that he was always trying to hide his emotions. For instance, “Men don’t cry”, that make him so unsympathetic and cold person. For me, Nick is not a victim because he could not dump Amy from his life. 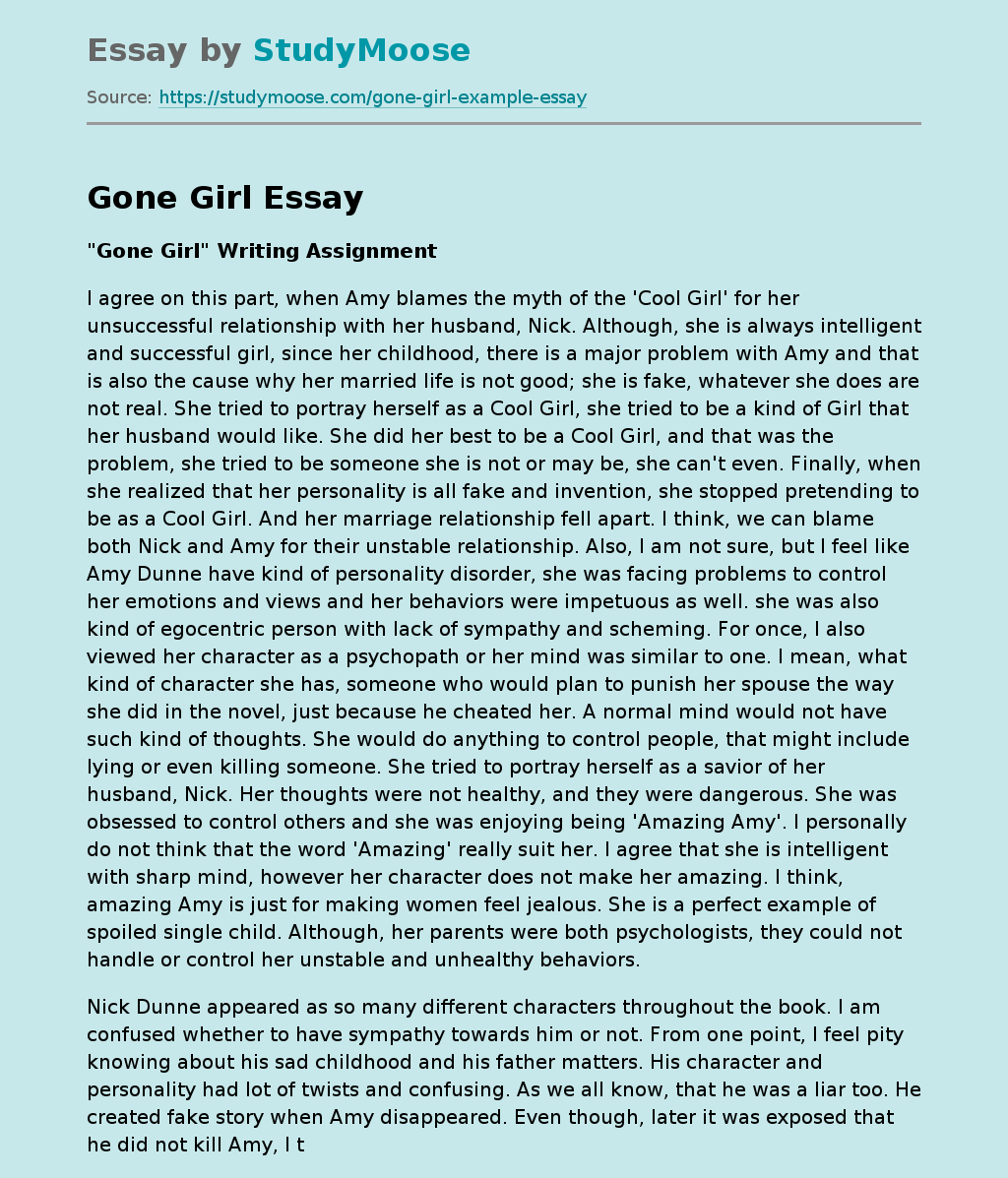