After the failed search of the police and the media, the girl’s aunt decides to ask for help from private detectives Patrick Kenzie and his girlfriend Angela. That movie is full of emotions about what is morally correct and what is the best decision to make. Once again we discuss that every decision that is made will have a consequence.

After reading and digesting what Kant said, I concluded that Patrick acted morally well according to Kant’s first fruits.

Don't use plagiarized sources. Get your custom essay on
“ Gone Baby Gone – a movie about the disappearance of a four-year-old girl ”
Get custom paper
NEW! smart matching with writer

The first premise is that a person acts morally if his conduct would, without condition, be the ‘right’ conduct for any person in similar circumstances.

I would say that Patrick did the right thing because he gave the girl back to the family because that is why they had hired him. His decision will mark the girl life forever. I remember a scene where Helen makes her promise that she will bring her daughter back and he agrees to respond by promising her.

Then Kant tells us the second premise is that conduct is ‘right’ if it treats others as ends in themselves and not as means to an end.

When Patrick takes the action of recovering the girl as an end not as a means of boasting, to the contrary of the media to give him praise for doing what he promised that he would do, or as the retired police who only wanted to occupy the void of the death of his dead daughter. Then Kant tells us that as a conclusion is that a person acts morally when he or she acts as if his or her conduct was establishing a universal law governing others in similar circumstances. Patrick says the action of the police was correct and all detectives should do the same in a similar situation, and this is what you call a universal law.

On the other hand, professor Michael Sandel in his lecture of ” Minds your Motive” presents Immanuel Kant, a defiant but influential philosopher. For Kant, morality means acting for duty, doing something because it is right, not because it is prudent or convenient. Kant invents a special term to describe the opposite of autonomy. Heteronomy is the opposite of autonomy. When I act in a heteronomous way, I am acting towards an inclination or desire that I have not chosen for myself so that freedom is autonomy, it is the reason in which Kant insists. Kant´s theory on autonomy is not designed to solve the traditional problem of free will. It is a response to the problem of heteronomy rather than the problem of determinism.

And the former pertains to concerns about the structure of practical reason rather than the scope of nature’s causal laws. So his theory of practical reason, rather than his metaphysics, provides the proper context for understanding his account of autonomy. It is a response to the problem of heteronomy rather than the problem of determinism. Since many said that the girl would be better with another family, but he knew that was not so. Another fundamental characteristic of which this professor speaks is that Kant of opony to the utilitarianism, he believed that the end should always be important. Patrick’s end game was always to recover the girl and return her to her family. Always recognize that human individuals are ends, and do not use them as means to your end.

Gone Baby Gone - a movie about the disappearance of a four-year-old girl. (2021, Dec 02). Retrieved from https://studymoose.com/gone-baby-gone-a-movie-about-the-disappearance-of-a-four-year-old-girl-essay 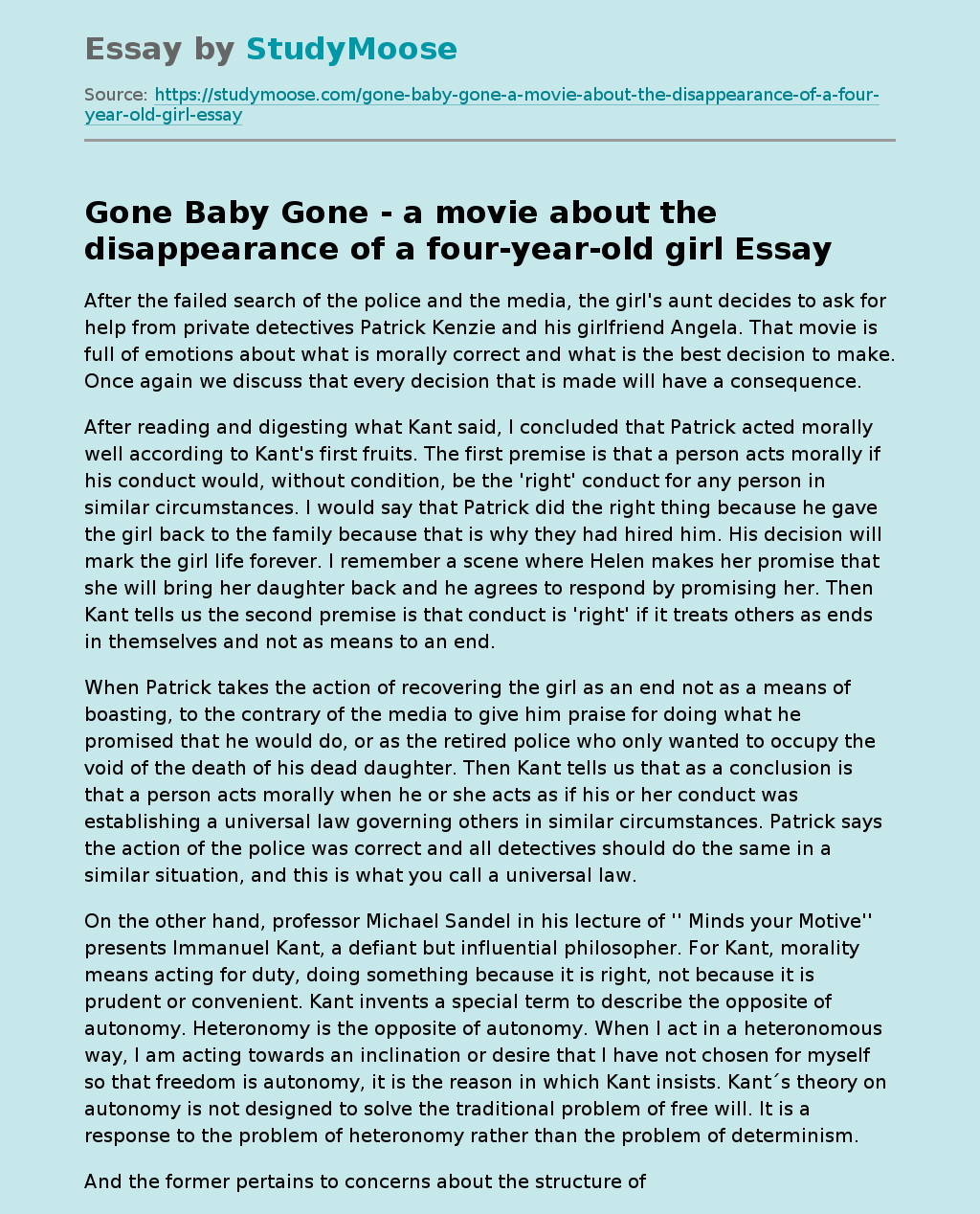