This film reflects a moral problem not only for critics but also for people who are enjoying it for more than an hour, and that leads to thinking. In this case this movie, leads us to try the idea of doing the right thing regardless of the consequences, although sometimes humans do the right thing if we benefit personally, and not like this case that the character chooses to do what Established even if it brings many consequences. We, like everyone in society, can choose to do the right thing before the law, or we can take powers and use our ethics and morals to decide on a problem.

Don't use plagiarized sources. Get your custom essay on
“ The Film “Gone Baby Gone” ”
Get custom paper
NEW! smart matching with writer

This film to the end recalls the character Patrick’s goal and more with his final decision, although he was involved in several ethical situations, but he was able to teach the moral issue of decision making and decide what his duties were, and the reasons. Based on the example of this character, we should be able to find the problem, and decide or find a balance between what is good and what is morally correct.

In order to understand this problem, we must first assimilate the idea of the duty that Kant proposes to us. Duty must be law enforcement not for utility or convenience, but out of respect for the law itself. The existence of this law is what allows us to deduce the freedom of the will. Freedom is necessary, it is the condition without which morality would not be possible.

Although evidently, there are obvious things that differentiate the good from the bad easily. But there are many situations in which this difference depends on the point of view of each person and the situation of the moment as in the case of Patrick in the actor to judge in question. Through Kant’s ethics and ideals, we, as publics and having the moral, the values and the decision authority, can make these decisions about whether we can choose between what is good and what is morally correct.

Based on this knowledge this event leads us to say that the action of this judge is morally correct because it follows the rule that you should report that problem: write to the police about Jack, this event is a morally dignified action. So, this part of the film agrees with the concept of Kant. If the action is motivated by the individual’s desire to do his duty, then the action is seen as goodwill. Since according to Kant acting out of service it differs from the mere act of duty. Here it seems that individual acts according to their duty, are on the same level of moral acts, are doing the right thing for the right reason. Kant believes that moral law is the only law that deserves to be respected, and moral action must be the result of the moral law. Through the acquired knowledge of ethics and ideals, spectators or the public and based on their morals, values and authority to decide for themselves, we can learn that we are able to make these decisions on the matter, and we can choose between l or that is good and what is morally right for society.

On the other hand, we see how Michael Sandel analyzes how Kant’s emphasis on our ability as adults and our capacity to reason, although there are people who do not have a high or normal degree of reasoning or rationality. Without being able to explore or recognize the three ways to approach justice. Without being able to maximize utility or well-being. Or not be able to respect freedom of choice, whether it be what you choose in a free market or the hypothetical options that would be made in a starting situation characterized by equality. Finally, we have that justice that means cultivating virtue and reasoning about the common good that we must instill in future generations to make this planet a better world.

Concluding, one can argue that the work of Sandel and Kant allows understanding what is at stake in the moral actions in this drama. You don’t come to a fair society by maximizing utility or guaranteeing freedom of choice. To achieve this, we must reason together on the meaning of the good life and create a public culture that rejoices from the discrepancies that inevitably arise to make good decisions like Patrick. Kant brought many ethical questions of his time as a duty, law, humanity, and liberty all well illustrated in this film. This shows us that even being the most beautiful and full of values sometimes we meet at a crossroads that only causes clashes between good and welfare and that we should go to actions simply thinking about the future and destroying every thought that We absorb as the children of an ideological society 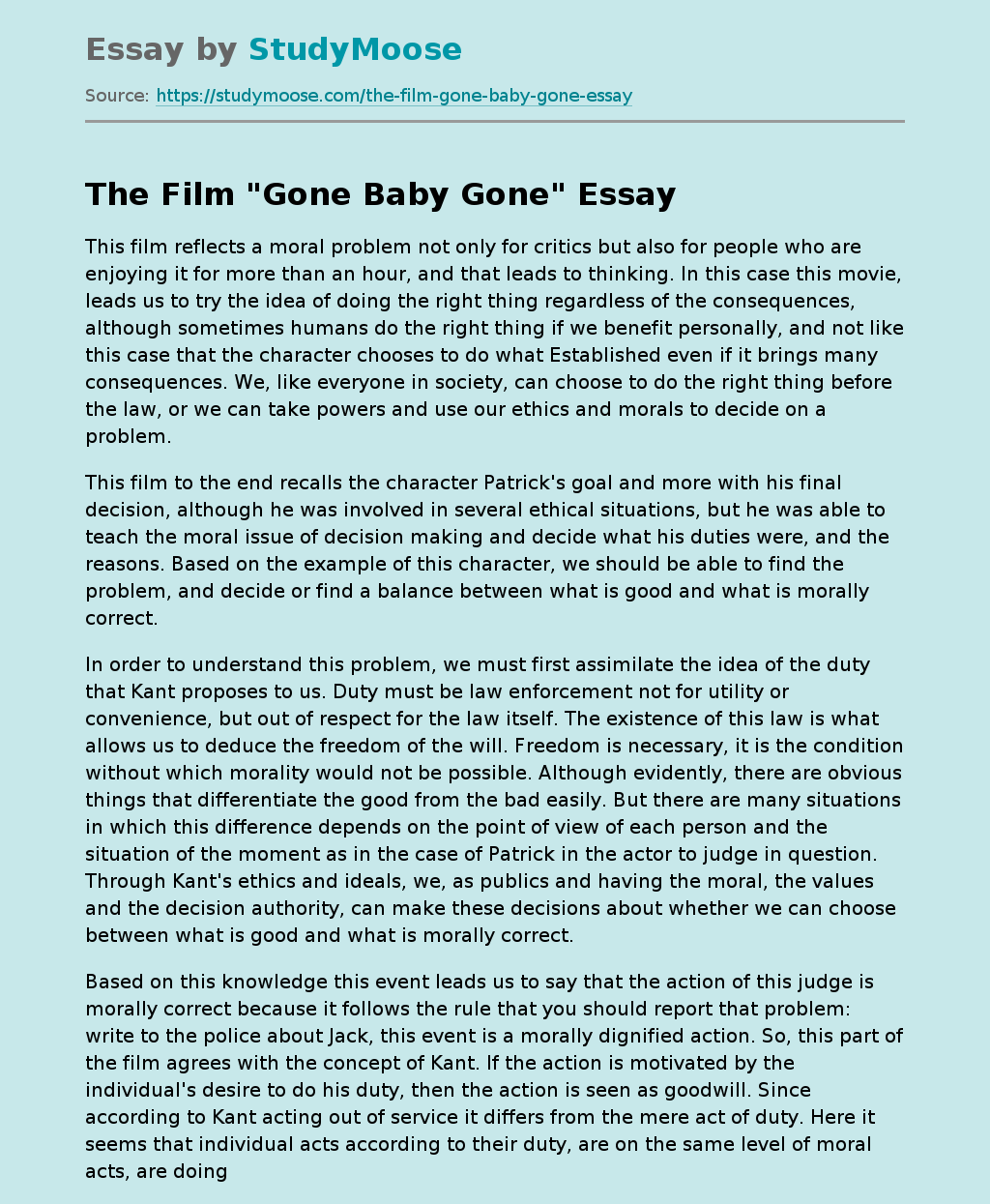