Film Concepts and Processes in the Film

This case study will include the analysis and appraisal of the film, Anon, directed by Andrew Niccol. Firstly, there will be context given to help the reader understand why this case study is written and what it is being made for.

The discussion of cinematography, sound and editing of the movie will be included in the analysis, then the creative storytelling will be talked about in the appraisal, along with visual styles, technical and creative skills that are relevant to the themes.

Don't use plagiarized sources. Get your custom essay on
“ Film Concepts and Processes in the Film ”
Get custom paper
NEW! smart matching with writer

Finally, this case study will conclude the main film ideas and skills used in the movie Anon (2018), as well as any judgements made about the film.

“Behind the Scenes of Darker Screens” is an exhibition being held by the Australian Centre for the Moving Image, and it focuses on the genre of dystopian films. This exhibition is being held to help teenagers understand concepts and processes used in Film, Tv and New Media.

The exhibition is looking for moving image media products that have the foundation concepts of cinematography, editing and sound.

Themes surrounding futuristic technology, infecting diseases and natural disasters are just some of the concepts that dystopian films use to engage teenage audiences.

Dystopian moving-image products are based on an imaginary world where the humans and their surroundings are in some sort of distress or injustice. They focus on war and crime, climate change, disease and even aliens. Big movie corporations like Netflix and Stan, are constantly creating new films and generating this idea of “dystopia”.

One of Netflix’s latest films, Anon, explores the future of technology and how our privacy can be completely transparent to others around us. This film is a prime candidate to be exhibited because of the dystopian themes and elements that are included.

The opening scene of Anon gives the audience multiple perspectives, starting with an extreme close up on the main characters eyes, Sal Frieland. This gives the idea to audiences from the get-go, that this film explores the symbolism of eyes and how vision is a key aspect in the production.

Throughout the film, we see a pattern of extreme close up shots of eyes when viewing memories which are also known as flashbacks. The next shot type is a medium shot, coming from Sal’s own perspective, showing everything that is surrounding him.

This is also known as a first-person point of view, where the audience sees what the character sees. While he is walking, everything that he sees is being labelled and is given an information box within the frame. Advertisements are illustrated on buildings by the use of graphics and animations. The next shot type is a long shot of the back of him, without any labels – just the world as it is.

These shots are filmed on a steady cam, then edited with shot-reverse-shot, rotating each shot type. By displaying the different perspectives, audiences can understand how this futuristic world is seen differently by humans, and how society in the future is dramatically different to what it is now.

The colour pallet of the shots are bland and monochromatic. There is no pop of bright colours as this gives the effect of a dark, depressing mood that is a whole other time era – in the future.

When Sal is sharing evidence of Anon (our protagonist) to Charlie, memories appear on the screen. There are many close ups on their eyes, with a low camera angle and dialogue/sound is very faint. This comes across as a serious conversation, as they have just discovered what’s going on.

The close up on the eyes is a symbolic motif, communicating to the audience that we are watching the characters memories through the screen, but they are watching a memory in their mind. The editing is short and crisp, with quick transitions from one shot to the next.

This is a clever way of portraying perspectives of different people throughout the film. When teenagers watch this, they have a sense of the stereotypical codes like who’s good and bad, because of Sal’s background and history with his child, how his apartment is lighter and more unique than others and the type of music that plays when he’s around in each scene.

As the film concludes the colour pallet brightens to symbolise the resolution of the crimes, and the non-diegetic sound (the deep, scary music played when the problem arises) in the background seems to fade. The editing of information about everything surrounding the characters still remains, but the memories of others aren’t as frequent, hence the resolution.

Movement of the camera is very still and calm, and shots are at a longer time length, unlike when the problem started to arise in the middle of the film. This change in editing, sound and cinematography communicates to the audience a shift in the storyline, that after all Sal had been through, had been worth it because he had found the mysterious hacker and the case was closed.

The difference in high and low contrast lighting, duration of each shot and the camera movement can convey a completely different mood or emotion for each scene in the film.

This case study’s purpose is to respond to a theme through the visual storytelling through the film. The criteria for this appraisal will be:

The film includes many themes, but the main one that occurs most throughout the film is the theme of technology and how it controls people’s lives through surveillance. Dystopian films have been around a long time, inspiring directors and writers after historical events such as the first successful television transmission by John Baird in 1926. This was one of the events that introduced the whole idea of technology taking over in the near future.

Also, the premiere of the first official science fiction and dystopian movie, Metropolis (1927), was an important step into the dystopian film genre. Another influence would be the construction of the first global computer network in USA 1969, entailing the internet.

These events have shaped the world in which we live in, have given creative directors and writers, something to believe in, and use to explore what the future could potentially look like. The specific examples listed above are a continual source of inspiration within the film Anon. The use of technologies, the internet and computers are used as key themes to illustrate the transparent dystopian future of Anon.

The audience has to have a clear understanding of the storyline and themes that are being depicted within the film, and Anon is one of those films that you can follow right from the start. One of the dystopian film conventions is the idea of betrayal, through the use of surveillance.

This is portrayed in the middle of the film, when the unknown girl finds out who Sal really is. As soon as she finds out, she gets revenge on Sal, colours get dark and the editing aspect includes glitches over Sal’s memories.

Shot types start to get closer, and editing of footage starts to get shorter, unlike the start of the film where shots are seen to be long in duration and shot type. This is quite a common convention, having signs of betrayal or the idea of good vs evil repeat in films over the years.

The visual style can be presented through the dystopian conventions and elements in the film Anon, having a neutral toned colour pallet and slow-paced camera movements. Technical codes that come up throughout the movie are the specific camera angles used for each conversation that occurs.

This gives an off-putting mood because the whole movie is from a completely different angle to most other movies, making it more intriguing which dystopian films are. A symbolic code that can be seen is Sal’s flashbacks of his son, can’t be played because they are glitched and destroyed by the unknown girl.

As soon as Sal notices that his memories are wiped, he is more determined than ever to find catch the unknown girl, which can hint to the audience that there is more to Sal than just being a detective, but that he was a dad and he tends to hide those soft emotions. These codes have been demonstrated to give the theme a meaning and help the dystopian genre come to life.

The film Anon, directed by Andrew Niccol is an eye catching and engaging film that clearly depicts a dystopian world, through the use of the technical and symbolic conventions and codes. It does this through the use of camera angles and movement within the cinematography, editing and sound of the film.

The exhibition “Behind the Scenes of Darker Screens” for the Australian Centre for the moving image should include this film because of the interesting storyline and futuristic elements that show to teenagers what film, tv and new media can be really about and how entertainment can be created.

Film Concepts and Processes in the Film. (2019, Nov 14). Retrieved from http://studymoose.com/film-concepts-and-processes-in-the-film-anonwritten-by-jordyn-example-essay 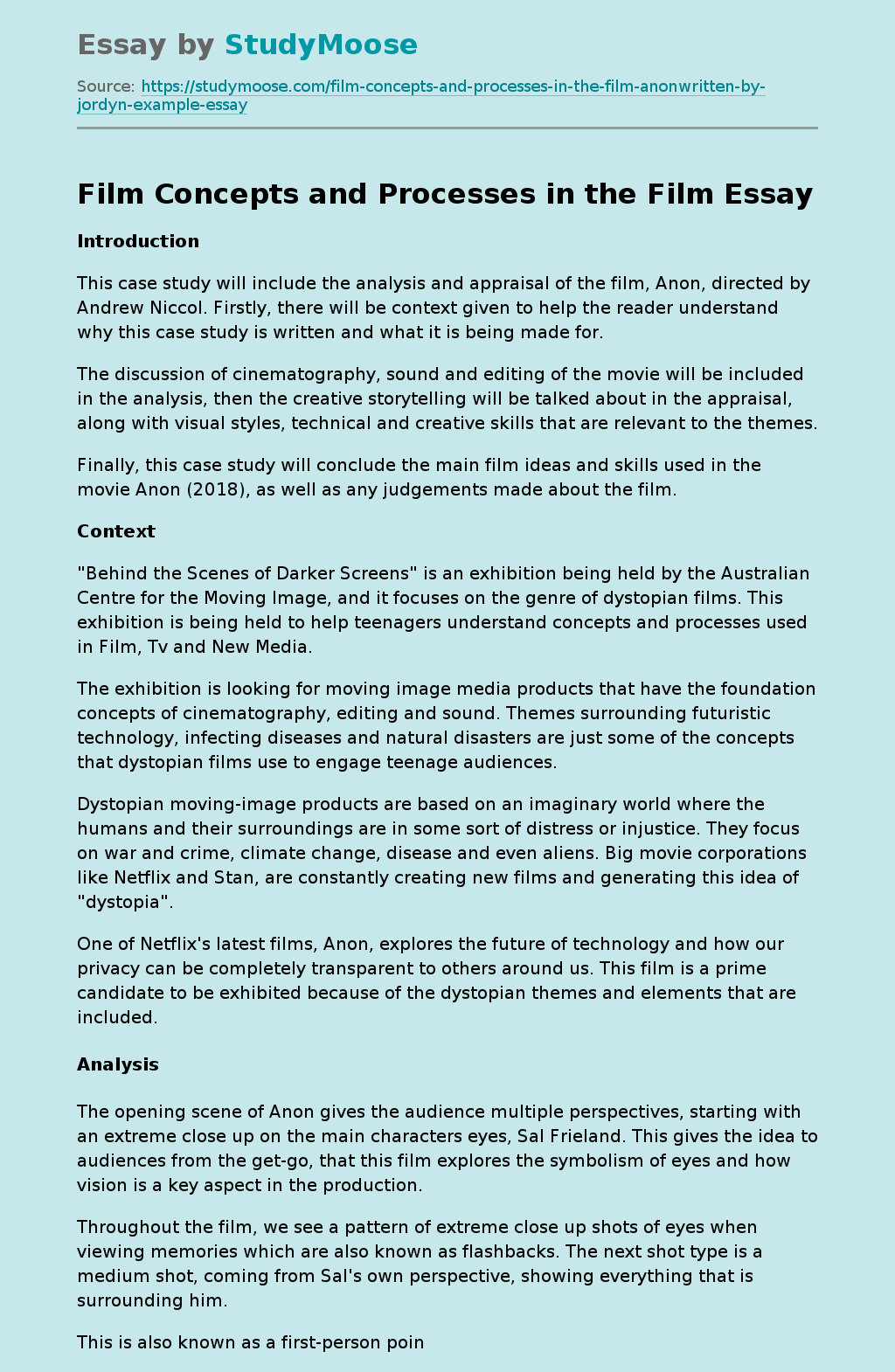