The Power of Fallacy in Advertising

Fallacies in advertising are prevalent nowadays to gain commercial advantage to the target audience primarily because people do no’t bother giving attention to traditional ads whether it is on the radio, on television, or on the Internet. It’s a very powerful advertising tool that focuses on deceptive claims that makes us hear what we want to hear and see what we want to see. Take the Xenadrine EFX diet pill advertisement for example. The advertisement claims to help burn off fat by boosting metabolism, though they never cited a qualified scientific study to back it up.

Don't use plagiarized sources. Get your custom essay on
“ The Power of Fallacy in Advertising ”
Get custom paper
NEW! smart matching with writer

The marketers of the product hired already physically fit actors and actresses to create an illusion that Xenadrine EFX helps in reducing body fat. The claim was later investigated by the Federal Trade Commission and was found guilty of falsifying claims and was therefore fined. Using fallacy in advertising helps attract viewers by leading them to believe in the effect of the product even if it’s effects are not proven.

It has its downsides as the example above explains, but it still is a very powerful tool that captures the target audiences effectively. Another form of fallacy that’s very popular nowadays is called ad hominem.

According to The Dictionary website, ad hominem is defined as “Appealing to one’s prejudices, emotions, or special interests rather than to one’s intellect or reason. ” (2006) Ad hominem is used more often because the nature of it is judging a person by what they do and who they are rather than hearing what he has to say and what he has to offer.

In reality, people always use ad hominem always, especially they fight for what they think is right based on their own judgment. Most people are opinionated and full of pride that they tend to judge first based on their common knowledge.

Ad hominem is a type of fallacy that people are accustomed to. It’s basically the kind of fallacy that seems to be around for ages even before the word itself was invented. Generally, people subconsiously practice it everyday without even knowing it, therefore it’s easier for them to apply it in everything that they do. Reference (2006). Ad hominem. Retrieved February 26, 2008 from http://dictionary. reference. com/browse/ad%20hominem. (n. d. ). US weight-loss pill marketers fined for falls claims. Retrieved February 26, 2008 from http://www. contactomagazine. com/articles/weightloss0107. htm

The Power of Fallacy in Advertising. (2016, Nov 14). Retrieved from http://studymoose.com/the-power-of-fallacy-in-advertising-essay 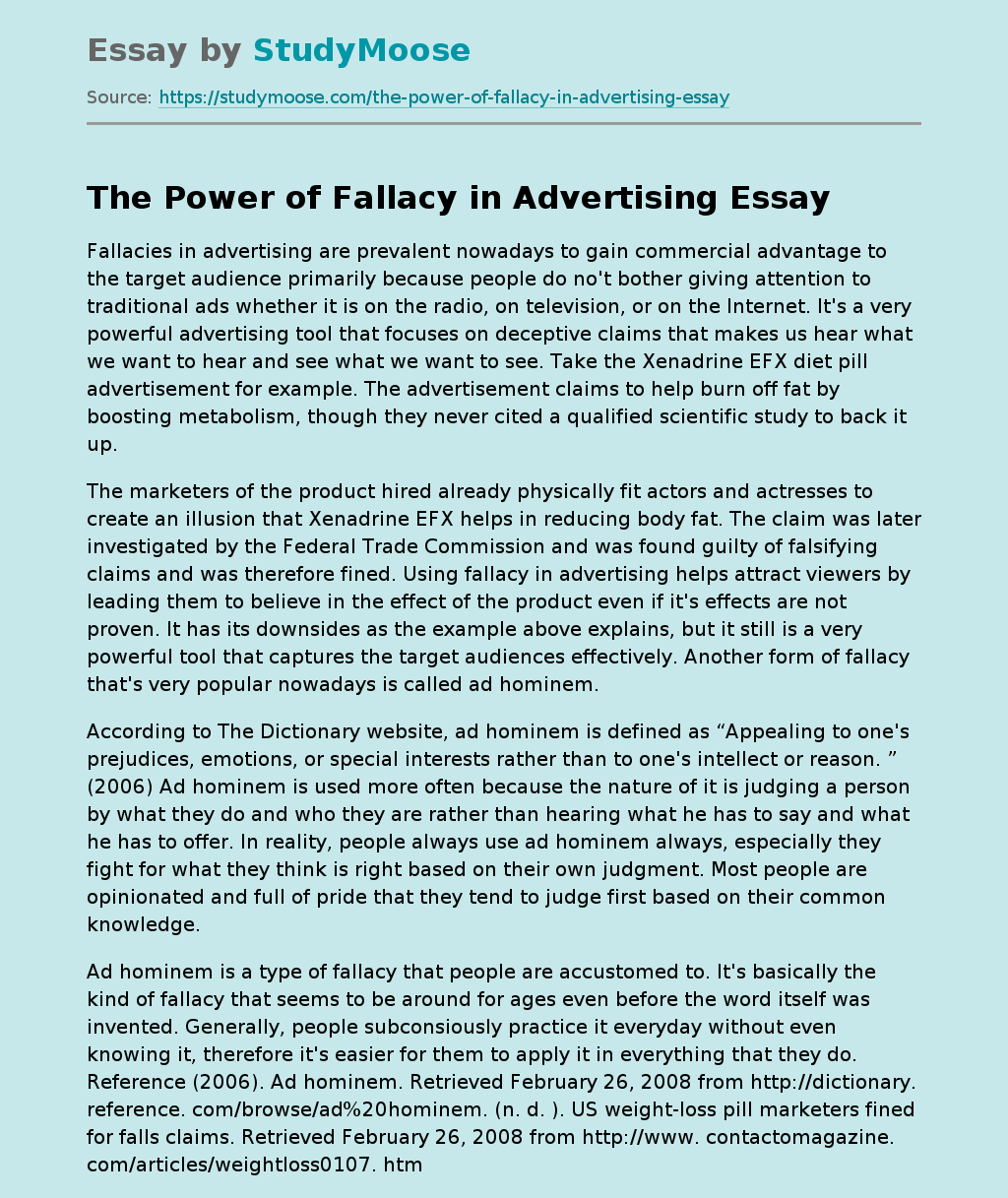