Going For The Look

Going for the Look

Times continue to change and today people tend to judge a person on how they look. Companies are becoming more competitive and are looking for ways to attract customers. More retailers and companies are using the approach to hire based on appearance rather than work capability. Hiring should be based on work ethic, rather than appearance which can be discriminating. Companies all over the United States are denying people employment based on their physical appearance.

Don't use plagiarized sources.
Get Your Custom Essay on Going For The Look Just from $13,9/Page

In the United States people are told that everyone is given equal opportunity; which is untrue because there are people being denied employment due to how they are dressed, piercings or tattoos they have, and even weight. It is not our choice to decide what we look like. We do not decide to be tall, short, have small or big eyes, or what skin we are. People should not base hiring on physical appearance. Most retailers are now looking to hire people that look like models, characteristics being tall, slim, pretty face, & young.

Retailers such as Abercrombie & Fitch, whose approach is to have an attractive sales force. Being a customer of Abercrombie, I have not seen an employee at Abercrombie being overweight. There employees look like beach models walking around the store. According to Mr. Serrano a former manager assistant at Abercrombie employees are told to approach and offer a job to someone who fits their store look. If someone walked into their store and they have a pretty face; employees are supposed to approach them and offer them a job even if they don’t have any retail experience.

I believe that is wrong because if an older lady with retail experience were to apply for a job at Abercrombie she wouldn’t be the one hired. Statistics show that people who look better get paid more. More and more companies are using the approach to hire on appearance because they believe it attracts more customers. So many people are unemployed and looking for a job, yet retailers decide to hire on looks rather than work ethic. It’s understandable for a modeling agency to hire on appearance and looks, but a retail store like Abercrombie should not have that hiring strategy.

How are older people supposed to have hope of being hired and retail stores when retailers are looking to hire young attractive people. Not everyone is born to be beautiful. Some people have better features than others. People should not be compared. Humans should be given equal employment opportunities and not be judged on how they look. A person can be beautiful on the outside and yet have an ugly personality. What is the point on hiring a pretty looking person when they can have bad customer service. I personally believe that a person should not be judged based on looks. Hiring based on physical appearance is discriminating and should stop. People around the United States are not having an equal employment opportunity. Hiring is not being based on job qualifications it is now being based on appearance. People deserve to be hired based work ethic. It is important for retailers and companies to realize everyone deserves an equal opportunity no matter how a person looks.

Going For The Look. (2016, Mar 20). Retrieved from https://studymoose.com/going-for-the-look-essay 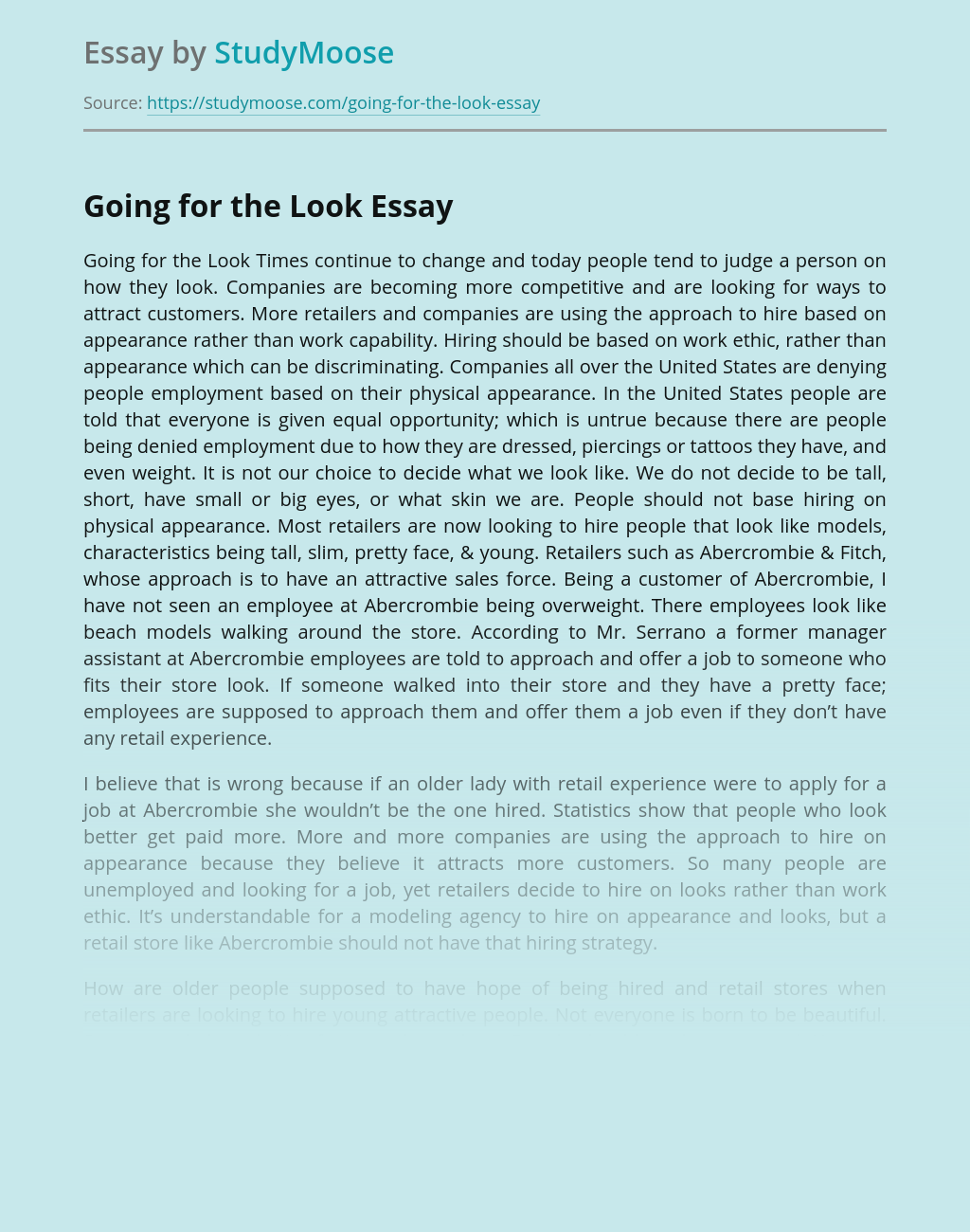 Rate this post 1. Jennifer asks that you make a list of five specific HR problems you think Carter Cleaning will have to grapple with. 1. High Turnover. Carter Cleaning Company will more than likely face the HR issue of high turnover because of the nature of the business. Most service industry/retail jobs result in...

Rate this post Minimum wage laws set legal minimums for the hourly wage paid to certain groups of workers (Gorman). Minimum wage laws were invented in Australia and New Zealand with the purpose of guaranteeing a minimum standard of living for unskilled workers. In the United States, workers are generally entitled to be paid no...

Rate this post Perfect Pizzeria Restaurants is a chain of 125 pizza establishments around the country with headquarters in Madison, Wisconsin. There are three locations in Bloomington, Indiana however they have financial and employee problems particularly at the location near the Indiana University campus. Each location has one manager and two shift leaders. The employees...

Rate this post PERSONAL PROTECTIVE DEVICES Risks exist in every work environment in various kinds: sharp edges, falling items, flying stimulates, chemicals, noise and a myriad of other possibly dangerous situations. Controlling a threat at its source is the finest way to secure employees. Depending upon the threat or office conditions, the usage of engineering...

Rate this post ​A nurse is caring for a client with a spinal cord injury. What are possible causes of autonomic dysreflexia that the nurse should monitor for? distended bladder (most common), fecal impaction, cold stress or drafts on lower part of body, tight clothing, undiagnosed injury or illness. A nurse is caring for a...