It is evident that in A Midsummer Nights Dream gender conflict is not the only source of comic disorder in the exposition of the play. This can be seen due to the number of other events and scenes which are sources of comic disorder such as character relationships, stereotypes & status and authoritative conflicts. An element of comic disorder in the exposition of A Midsummer Night’s Dream is the idea of men having a higher status than women. The theme of men having control over women is also reinforced in the relationship between Hippolyta and Theseus.

Don't use plagiarized sources. Get your custom essay on
“ Gender Conflict in ‘A Midsummer Night’s Dream’ ”
Get custom paper
NEW! smart matching with writer

Theseus states that he has “wooed thee with my sword, and won thy love doing thee injuries” whether this is taken in a sexual context or a violent one, it highlights the idea of men having the power and force to overpower and subdue women. The fact that Hippolyta is the queen of the Amazons shows just how strong this idea is, as she would have been a powerful and strong warrior herself.

The theme of the old having power over the young is explored with the idea that Hermias father has complete power over her as she is just a young woman. The fact that only old men hold the high, authoritative positions in Athens again reinforces this idea that the old and the male rule the people. However this is humorous to an Elizabethan audience as the English Monarch at the time was in fact Queen Elizabeth.

Famed for her ferociousness and female power, this is greatly juxtaposed with the treatment of the women in A Midsummer Nights Dream.

Particularly because Queen Elizabeth was actually a fairly young monarch. The quote “as she is mine I may dispose of her” directly reinforces the idea that woman are simply the possessions of men whether they be their daughters or their wives. Another representation of these themes is the conflict between Oberon and Titania. Titania is being again the disobedient woman who will not do as her powerful husband wishes. Oberon states in act 2 scene 1 “Tarry, rash wanton. Am not I thy lord?” which enforces the idea that Titania should be obeying Oberon, not being sarcastic and brazen. She replies to oberon “Then I must be thy lady. But I know, when thou hast stolen away from Fairyland, and in the shape of Corin sat all day, laying on pipes of corn and versing love to amorous Phillida.” in an accusational tone accusing him of being unfaithful to her. As a woman, Titania is exerting power and makes herself almost Oberon’s equal in their back and forth bickering, however this displeases Oberon as she should be submissive and passive towards his behaviours. So, Oberon decides to humiliate Titania in order to achieve what he wants, which in this case, is the indian boy.

However, Oberon does not have a claim to the boy has he was rightfully given to Titania to look after, due to his mother’s death. The fact that Oberon must humiliate Titania into getting what he wants demonstrates how much of a strong character Titania is and creates a great parallel of whom has the power in the ‘magical’ relationship. This humiliation technique is comic to an Elizabethan man as this meek representation of women would have appealed to the sexist humour and values of the era. We see this conflict with Hermia and her father Egeus when Egeus is taking her to see Theseus the ruler of Athens because of her refusal to marry Demetrius. Egeus has arranged for her to marry Demetrius, a common practice in Ancient Greece and the ancient world. An Elizabethan audience, especially women, would be able to relate to this as arranged marriages would still take place for money and status.

A source of comic disorder in the exposition of A Midsummer Nights Dream is the character relationships. Lysanders attempts in the woods to sleep with Hermia are very humorous to the audience as they see the problems with lust and pride of virginity in young love. The quote “One turf shall serve as pillow for us both; one heart, one bed, two bosoms and one troth” shows that although Lysander may be riddling prettily he is implying he wants to be able to hold or be close to Hermias breasts. The repition of the word ‘one’ shows Lysanders desires to become ‘one’ with Hermia, which is a reference to sex. However it also could be that Lysander desires to spiritually be ‘one’ with helana, not just physically but mentally. This could be linked with the way the forest brings out the characters spirituality. In Northrop Fryes “the green world” he discusses how the main characters escape the order of a city for a forested and wild setting adjacent to the city. This natural environment is often described as a green world. It is in this more loosely structured, fantastic environment that issues surround social order, romantic relationships, and inter-generational strife, which are a prominent part of the “city world”, become resolved, facilitating a return to the normal order.

In correspondence with this, recent literary critics drawn to ecocriticism have occasionally found the concept valuable to their work as well. Lysander’s advances cause comic disorder as they explore the idea of letting the characters sexuality free in the forest. This is funny to a male and female Elizabethan audience as Lysanders attempts to sleep with Hermia are quickly shunned by a prim Hermia who quickly guesses his hidden meanings. Another couple to cause comic disorder in the exposition are Helena and Demetrius, due to Helenas utter lust and doting for Demetrius. This shows gender role reversal as Helena should be a lady who is wooed and pursued. An example of this being “We cannot fight for love as men may do. We should be wooed and were not made to woo.”

Helena admits that she is consciously gender role reversing, however she will continue to do so until Deemetrius loves her. This is comic as it shows how her attempts to seduce Demetrius fail time and time again and she uses very comic language to express her desperation for Demetrius to return her feelings. For expmale “I am your spaniel; and, Demetrius, The more you beat me the more I will fawn on you”. This unbelievably derogatory analysis of Helena by herself is sad yet comic as she is supposed to be a lady who is reserved and does not make her feelings known, never mind in such a dramatic and desperate fashion. This humour in the exposition sets up the themes of gender role reversal and sexuality in A Midsummer Night’s Dream.

Puck is obviously a main source of comic disorder in ‘A Midsummer Nights Dream’ for example his disastrous mix up of Lysander and Demetrius. Though A Midsummer Night’s Dream divides its action between several groups of characters, Puck is the closest thing the play has to a protagonist. His mischievous spirit pervades the atmosphere, and his actions are responsible for many of the complications that develop the main plots in a chaotic way. Puck sees himself as a naughty “master” that plays with mortal people as if they were puppets. He takes advantage of one of humankind’s weakness, love. For Puck, love is either a nuisance (played more evil than good) or just a comical disaster that humans and other beings stupid enough to fall into it, to entertain him. The audience can see this when he says “Up and down, up and down; I will lead them up and down: I am fear’d in field and town; Goblin, lead them up and down.” This quotation highlights how mischievous he is and how he tortures humans in their love affairs by causing chaos and malfunction.

Puck’s transformations also cause mass comic disorder in ‘’a midsummer night’s dream’’, he famously transforms Bottom’s head into that of a donkey, and he’s also fond of shape-shifting himself. At one point, he brags that he often pretends to be a stool and then disappears so that old ladies will land on their “bums”. He also terrorizes the Mechanicals in the woods after turning their friend into a human-donkey (bottom). One could say that Puck parallels Philostrate’s position as Theseus’s “master of revels.” (In Elizabethan England, the Master of the Revels was a male who was in charge of all the entertainment at court organizing entertainment and parties for the king and court. Philostrate’s job is to make sure Theseus and his court is entertained. Puck’s main job, much alike Philsostrate, is to entertain his king and his fairy comrades with farce and comedy. Puck often in the play takes on the role of the court jester. As Puck says, his duty is to “jest to Oberon and make him smile” and he does this with the humiliation of Titania, causing her to fall in love with bottom, and by accidently causing hilarious chaos within Lysander, Hermia, Helena and Demetrius’ love lives. 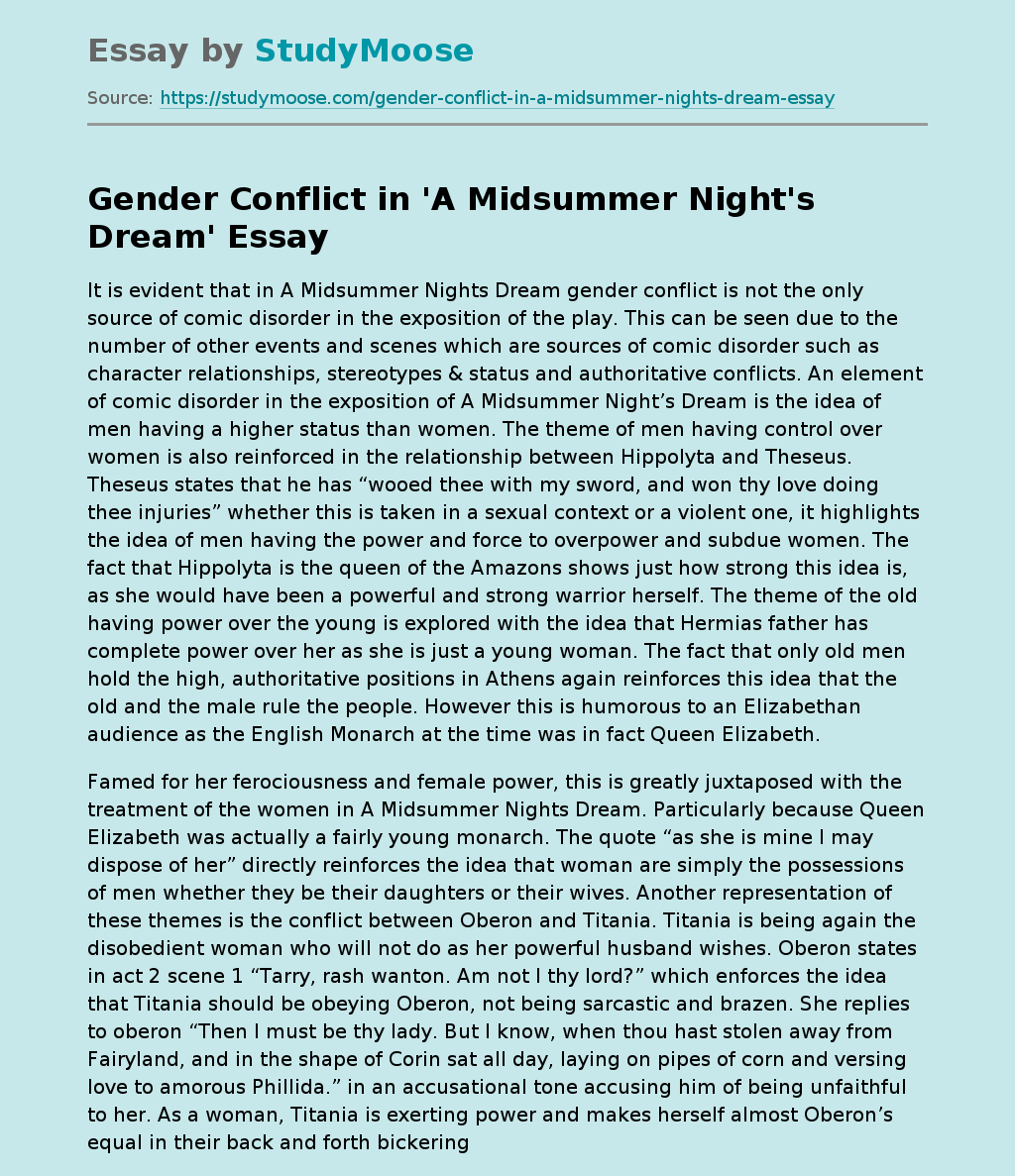