‘A Midsummer Night’s Dream’ is comedy but the first scene is quite a tragic. It shows that not only does a father want her daughter killed or for her to marry a man she doesn’t love but the daughter is willing to die. None of this is comical. The obvious humour in this play comes from the mechanicals which appear in act 2. This has the mechanicals trying to appear clever by calling their play “The most lamentable comedy, and most cruel death of Pyramus and Thisby”.

Don't use plagiarized sources. Get your custom essay on
“ Argumentative Essay On A Midsummer Night’s Dream ”
Get custom paper
NEW! smart matching with writer

The next piece of humour comes when Quince is giving out the parts and asks flute to play Thisby, and Flute says “Nay faith, let not me play a women, I have a beard coming” this is funny because Flutes part would have been played by a young boy, there would be no chance of a beard.

More comedy comes when after giving out each part Bottom explains how he could play each part better than the rest “let me play the lion too”. It is also funny when Snug is told he is playing the part of the lion he asks for the lions part to be written down as he is a slow of study.

This is funny because a lion only roars and does not speak. The mechanicals also use vulgar prose this would appeal to the less educated people at the front.

Act 2 scene 1 is comical when Puck is explaining all the tricks he has played on the village people, but the scene soon turns tragic when Oberon and Titania discuss all the discord they have caused in the world. Ironic comedy is set up at the end of this scene. The audience know that there are two men in Athenian garments in the wood that night with a women but Puck does not.

As there was a major lack of scenery in Shakespeare time he had to let the audience know the setting by using imagery. Theseus and Hippolyta let the audience know it is night time at the very beginning of the play. They regularly refer to the moon “And then the moon, like to a silver bow” At the beginning of act 2 a whole speech by the fairy is dedicated to imagery “Over hill, over dale Thorough bush, thorough brier Over park, over pale Thorough flood, thorough fire;” This is to describe to the audience the woodland. Titania and Oberon make many references to nature to perhaps show their strong connections with it.

At the end of act 2 scene 1 Oberon describes where Titania sleeps so the audience can again imagine it even though they can not see it. “Quite over- canopied with luscious woodbine, With sweet musk-roses, and with eglantine. There sleeps Titania sometime of the night” In the first three scenes of ‘A Midsummer Night’s Dream’ Shakespeare differentiates between the characters by the names they have, whether they speak in poetry or prose what they talk about in each scene and whether what they discuss is light and jovial or tragic and important. 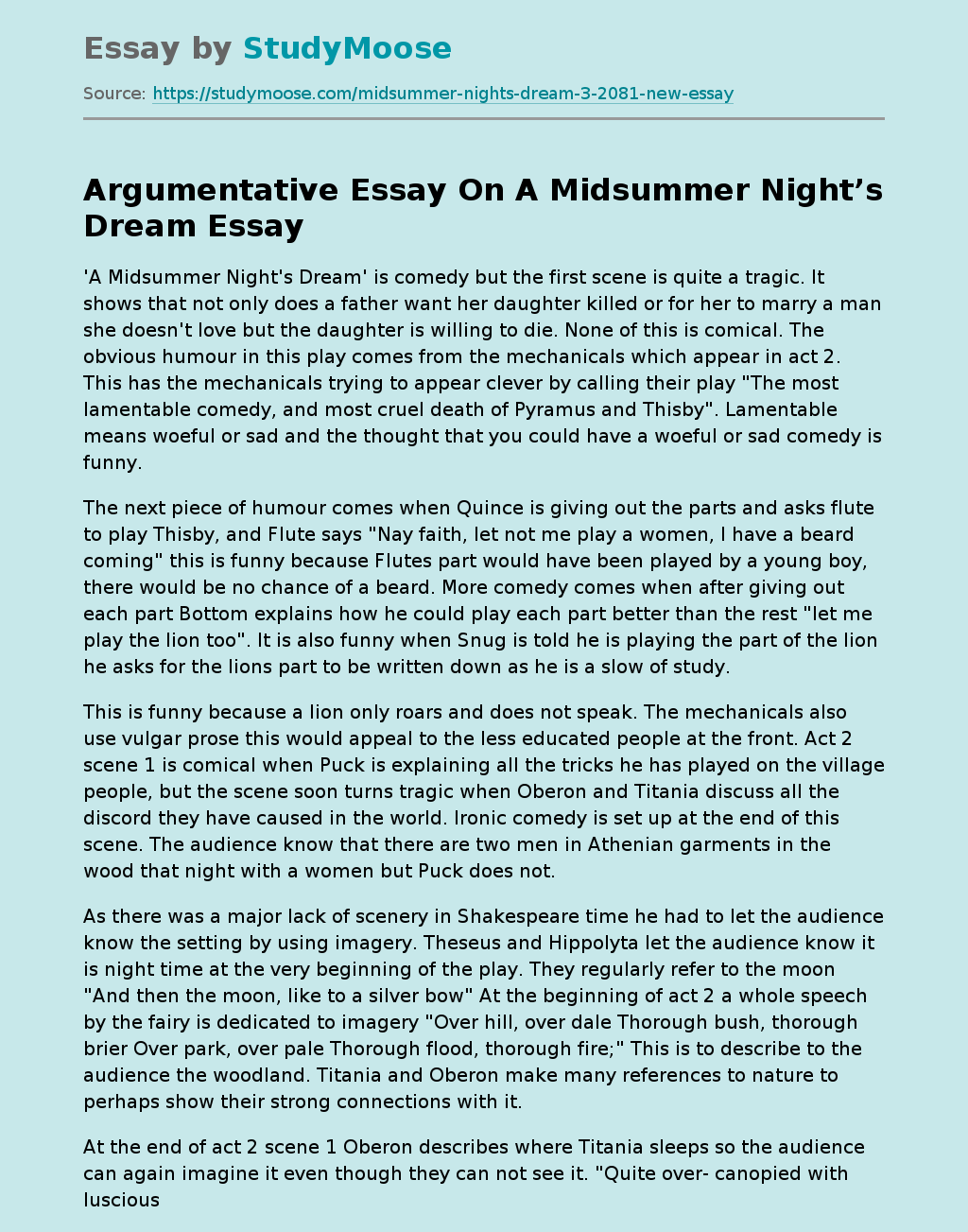