The Darker Elements in A Midsummer Night's Dream

Amid this innocent delights, whimsical and humorous piece of work, Shakespeare uses the idea of love or romance to explore several themes thereby leaving imprints of dark undertones involving mischief, silliness, gender roles, rigid patriarchy and undeniable examples of misogyny. Right from the beginning, the play starts off highlighting the degrading position of women and evinces that the play is set in a patriarchal society. In lines 16-19 of Act 1, Scene 1, Theseus introduces his bride-to-be, Hippolyta, as a war prize for conquering a nation of warrior women, the Amazons, and is arguably against her will.

Don't use plagiarized sources. Get your custom essay on
“ The Darker Elements in A Midsummer Night’s Dream ”
Get custom paper
NEW! smart matching with writer

The play then continued with Egeus approaching the Duke of Athens in a matter concerning the marriage of his daughter Hermia to a man of his choice by the name of Demetrius when his daughter is in love with Lysander whom he disapproves of. Hermia’s father is committed to having his way irrespective of his daughter’s choice and doesn’t mind having her dead if she won’t comply to his wishes and for this reason, he requests Theseus for “the ancient privilege of Athens.

“What say you, Hermia? Be advised, fair maid.

To you, your father should be as a god,

One that composed your beauties, yea, and one

To whom you are but as a form in wax

By him imprinted, and within his power

Theseus’s reply is equally sexist and misogynistic. He uses his power to solidify the tradition of rooting up any power or choice a woman could have saying that Hermia should consider her father as a god from which she is formed and surrender her freedom.

He goes on to say that it would have a fatal consequence on her if she chooses against her father’s will or be forever banished from the society of men to become a nun. He even suggests that she will be happier being a child-bearing married woman, an attempt to remind Hermia of her place in society as a woman.

The un-festive reality keeps unwinding when Lysander points out that Demetrius is an “inconstant man,” (1.1.110) indulging in a habit of sleeping with women and leaving them after, in the presence of Theseus and Egeus but doesn’t get called out on his practice and simply gets away with it. If the gender had been reversed, the play would have followed an alternate plot line. Furthermore, in the second Act, when Helena pursues Demetrius in the wood, he threatens her with physical assault for bothering him and remarks that she ‘impeaches her modesty’ by doing so; trying to bring across the message that Helena has done what she as a woman isn’t supposed to do thereby signalling the gender roles. Helena, in distress, promptly points out, “We cannot fight for love, as men may do; We should be woo’d, and were not made to woo” (2.1.241-242) and exposes the nature of society and constrains it puts upon women.

The Darker Elements in A Midsummer Night's Dream. (2019, Dec 15). Retrieved from https://studymoose.com/the-darker-elements-in-a-midsummer-night-s-dream-example-essay 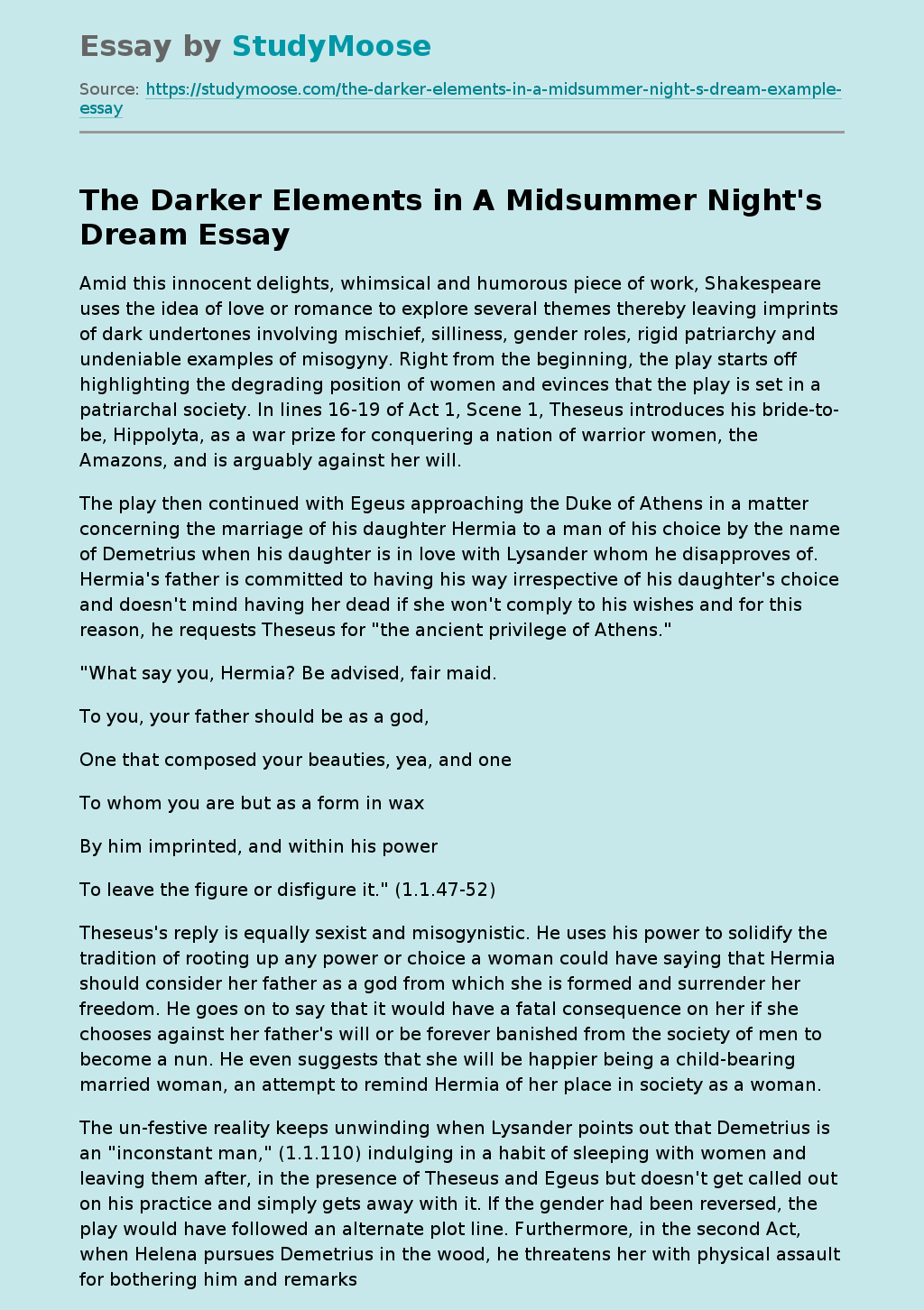