High and Low Comedy are two features of the comic theatre branch of the performing arts. The incorporation of both aspects of comedy into the widely popular play written by William Shakespeare “A Midsummer Night’s Dream” is a key point in why it remains extremely popular to this day. As high comedy and low comedy are both aimed at different audiences in society, it helped broaden Shakespeare’s fanbase. High comedy, as it is commonly used, refers to a level of comedy that often focuses on clever dialog and witty banter.

Don't use plagiarized sources. Get your custom essay on
“ A Midsummer Night’s Dream ”
Get custom paper
NEW! smart matching with writer

Often characterized by a sophisticated nature, it targets the higher-ups in society as the humor that lies within high comedy often requires an understanding of those referred to within the joke itself. It is usually a satirization of society as it often tackles current events. In A Midsummer Night’s Dream, high comedy is incorporated into the play in order to maintain a lighthearted tone. On the other end of the comedy spectrum is Low Comedy, wherein the usage of slapstick and prop humor is incorporated.

This form of comedy is often appreciated by anyone regardless of social status, and is a straightforward way of poking fun at a subject.

Shakespeare’s incorporation of both high and low comedy allows the audience to be dissociated with the tragedies of the characters in the play despite their awareness of it and manages to keep the performance lighthearted and stress-free for the audience. Perhaps a good example of the application of both high and low comedy in the story is the character Nick Bottom’s performance in the play by the craftsmen.

Here, Bottom displays low comedy through his silly mistakes, meanwhile high comedy is incorporated with the fact that his head has been transformed to that of an ass; a clear depiction of the character’s arrogance despite his foolishness.

Shakespeare’s play is also not without many literary devices which is an integral aspect of defining an author’s style. In A Midsummer Night’s Dream, a metaphor is used by Theseus who refers to a nun as a lonely rose. Theseus also personifies a flower in that a rose distilled is a happier rose. Soliloquy is also present, as many characters such as Nick Bottom and Oberon were shown talking out loud to themselves in the play. Similes are also observed in the play, such as where Theseus relates Hermia’s father as a god, and Hermia herself, as a wax imprint of her father.

Framing is present in the play by the craftsmen which was performed within a play itself. Symbolism is carried out with Bottom’s head transformed to that of an ass. The careless use of the love potion by the faeries is also a symbolism of the unpredictability and overall power of love. Alliteration is present in the name Francis Flute. Other literary devices of note are Shakespeare’s use of Irony in a story of love and relationships played out as a comedy. He also uses contrast between the main characters themselves, such as in Helena and Hermia’s height. 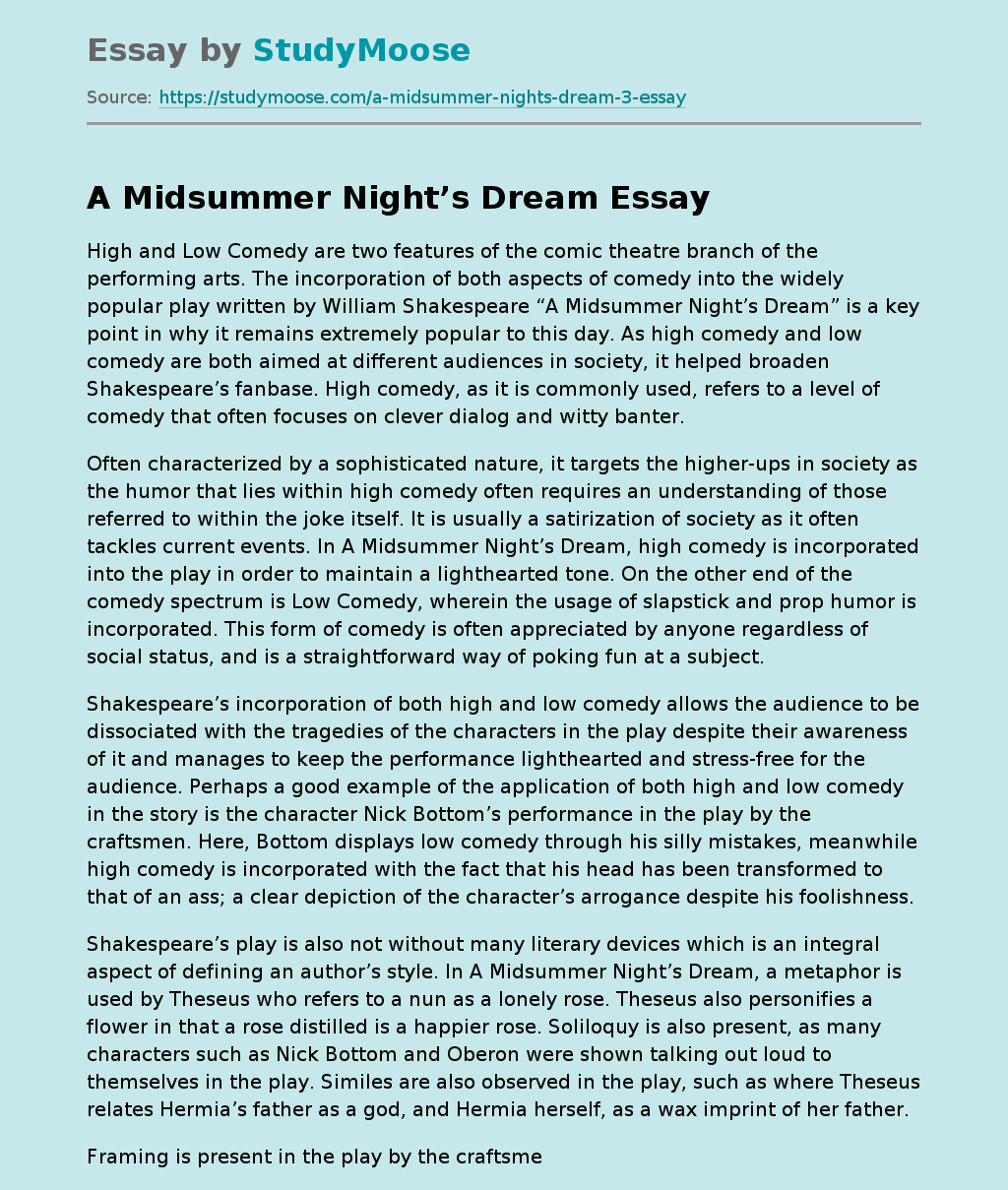