Don't use plagiarized sources. Get your custom essay on
“ Gay Marriage is Immoral ”
Get custom paper
NEW! smart matching with writer

The term same sex marriage is used to denote a civil union of people from the same sex, recognized by law and accepted by the society.

The traditional stand and definition of marriage, a definition that has stood the test of time is that it is union of two consenting people, a man and a woman and not a union of two men or two women. This is the same stand taken by the two important Holy books; the Bible and the Quran. For the law to recognize same sex marriages or the society to purport to support gay unions, it is to go against the conventions as set by religion and traditions.

Islam is vehemently opposed to same sex marriages. In the Quran, Muhammad Abu Zahra defines marriage as a contract between a man and a woman with an intention of living and assisting each other.

Ibn Uthaimeen also takes a similar comprehensive perspective in regard to marriage seeing it too as a mutual contract entered into by a man and a woman with the sole purpose of bringing up a family. Procreation is core to marriage from an Islamic perspective. Christianity is against the union of gays in a marriage. The motivation behind this opposition stems from the book of Genesis where it says that God created man and a woman so that they can live together and assist each other. God saw that man had grown lonely in the garden of Aden and thought that He could give him a helper. This helper turned out to be a woman.

According to the bible, homosexuality is a sin and will be highly punished. The Bible seems to lump homosexuals alongside murderers and thieves, meaning that it highly disapproves of such tendencies. It hence would be a contravention of Christianity for the same church to go ahead and bless same sex marriages (Caramagno, Thomas C, 34). There is a ranging controversy in the modern world when the issue of the same sex marriages comes up especially amongst Christians. Many liberal churches have gone ahead and blessed same sex marriages purporting to get the justification for this from the bible.

This is not possible as the bible strongly condemns it, referring to it as an abomination. The new liberal churches are just consumed by the desire to appear modern and accommodating but not driven by the motivation to fulfill bibles promises. The Catholic Church for example has maintained its conservative stand on these issues quoting verses from the bible and not willing to conform to modernity, this is in spite of the fact that a number of bishops and presents have come out in a strong support of same sex marriages.

It should be emphasized that in spite of the modern views on gay marriages, the bible still sees it as an immoral practice. The only union that Christianity should recognize is the marriage between a man and a wife (Robert P. George, Jean Bethke Elshtain, 46). A look at the various cultures in the world indicates that they are against homosexuality and by extension same sex marriages. A look at the history of homosexuality shows that it has always been frowned upon in the society, a concept referred to as homophobia.

The mid of last century was full of hostilities towards homosexuals who were being subjected to all manner of injustices in the society. This sort of discrimination was cultural based; traditions were against homosexuality in the dominant feeling that it was immoral and also an abnormal practice. This is a notion that still stands in many cultures. Only in the last decades of the last century did this discrimination subside. Cultural relativism posits that our beliefs and practices are direct products of our culture.

The dominant cultures are against homosexuality and hence no more accommodating towards same sex marriages. Emmanuel Kant’s philosophy on categorical imperative states that humanity should “act only according to that maxim whereby you can at the same time will that it should become a universal law” (James welling, 1993) According to Kant, what is considered moral is one which can be done by everybody under all circumstances. Same sex marriages then are not acceptable if interpreted alongside this line of thinking.

Traditionally, the real essence of marriage is procreation. This is something that can be achieved through same sex marriages. Emmanuel Kant could not have approved same sex marriages on the basis that they can not be taken up by whole or greater portion of the society. Similar to the cultural relativism principle is the virtue theory that seeks to lay great emphasis on virtues. The society has clearly demarcated virtues from vices. Stealing and promiscuity are vices that are frowned upon by every orthodox society.

Homosexuality has been traditionally considered a vice and hence same sex marriage according to the virtue theory is also unacceptable. There is also the concern that allowing same sex marriage is tantamount to signaling the end of the world in terms of population density. It has been mentioned that religion and traditions recognize procreation as a key factor in marriage. This is one aspect that is clearly missing from gay marriages. It is important to note though that there are laws in some states and countries that allow same sex partners to adopt children.

Sociologists have questioned the rationality of such an idea and whether such children will be able to grow up like normal kids. Perfect families comprise of both man and wife who come together to bring up children giving them both maternal and paternal love. Same sex marriages deny children the rights to enjoy this kind of love. There are a number of arguments that have been put forward by the proponents of same sex marriages. One of them centers on freedom association as a basic right. Freedom of choice movement and association are basic rights enshrined in the bill of rights.

Discrimination is also an issue tackled in the same breath when human rights come up. By failing to give recognition to same sex marriages, the law and the society are discriminating against the minority. They go ahead and argue that homosexuals are human beings in need of recognition and liberty to do what they see fit without any form of discrimination. To deny them the right to marry like the heterosexuals is a contravention of their rights, privileges and benefits accessible to heterosexual partners in marriage. This is their basic human right (Wolfson, Evan, 19).

Proponents of same sex marriages also use the evolution theory to justify its appropriateness. They have noted that the society and traditions have undergone an evolution and the society is gradually becoming more accommodating. Some held notions traditionally have ceased to hold. Polygamy was acceptable in the past but it is frowned upon nowadays. Homosexuality was seen as illegal but now it has become an acceptable practice. Having children out of wedlock is not considered a cardinal sin anymore. Proponents are saying that the same case should happen to the institution of marriage.

The traditional idea of marriage as being a union of a man and a woman should also change to include same sex partners to ensure that many people join this holy institution Homosexuality too they argue is not unnatural, it is not unusual as some people claim it is. Homosexuality is a natural behavior deeply ingrained in a person’s genes and hence cannot be controlled. Prohibiting same sex marriages on the basis that people can change their behavior is wrong as it denies them a chance to be in a lasting, loving and faithful relationship as sexual orientation is incontrollable (Chauncey, George, 19).

On the issue of its legalization, proponents of same sex marriages scoff at the idea that religion should have a say on whether it should be legal or should be prohibited. They claim that separation of states and religion is a key ingredient to any progressive and democratic nation. The government hence should not have a say on who one should marry or should not marry. This however is an argument that does not hold any water. Though they are right in their claim that the church and the state should be separated, this separation however does not delink totally religion from the process of law making.

Laws and government legislations are a product of traditions and practices which to a certain extent are inspired by religion. Religious views have to be incorporated to ensure synergy. The argument on the evolution of societal practices is ill advised, just because changes have occurred and some things frowned upon have become acceptable does not mean that the society has to accept every thing that comes its way even when its inappropriateness has been recognized. Proponents of same sex marriage when they advocate against discrimination and decry their human rights violation.

Same sex marriages go against the traditional institution of marriage as they do not conform to one of its core essential, procreation. Legalizing same sex marriage is tantamount to sanctioning moral erosion and contravention of societal values and ideals. 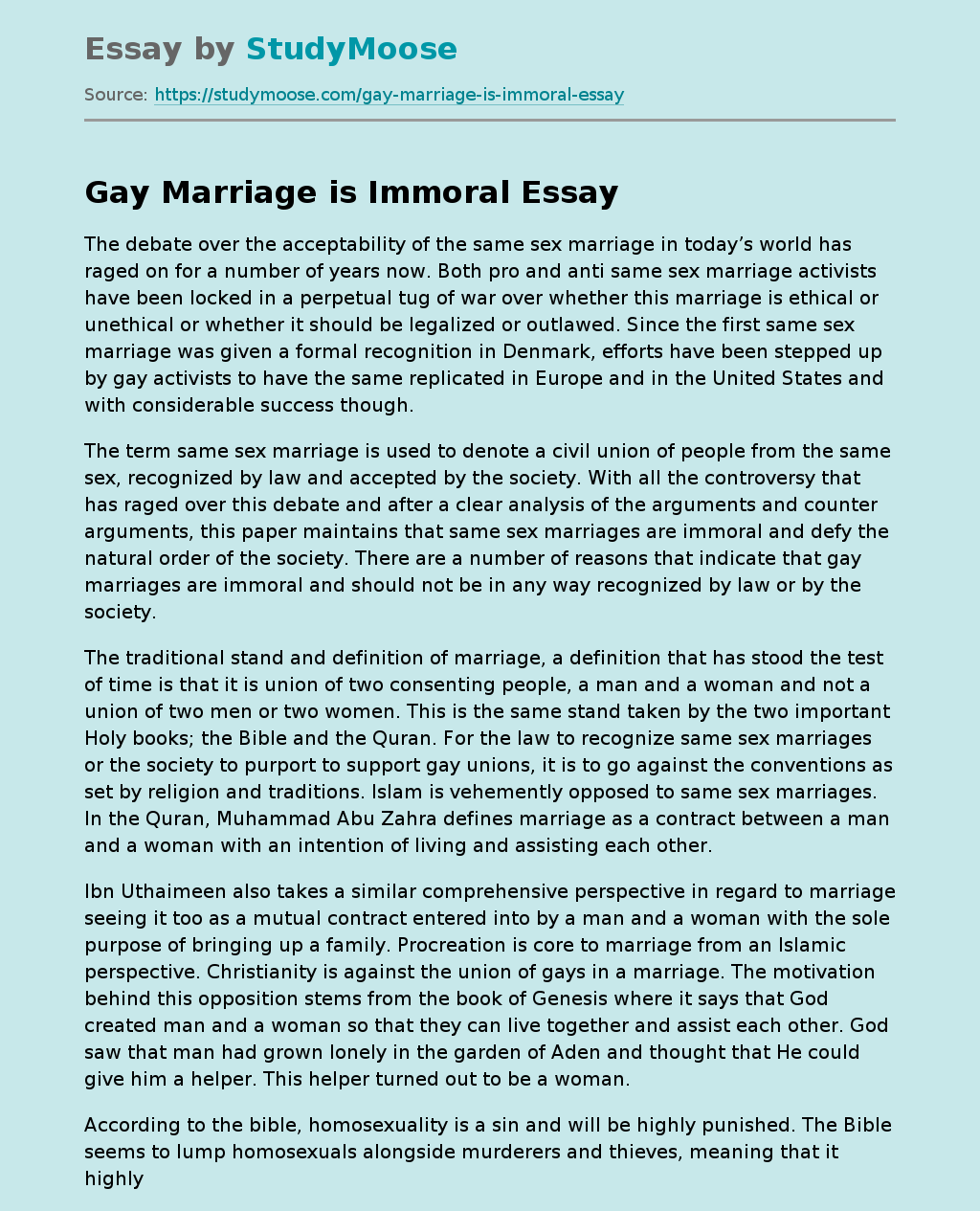