Judging by the title of this article written by Lisa Miller, readers would tend to believe that this would be a piece of work written to support the religious side of the war on gay marriage. However, when reading through just the first paragraph, it becomes apparent that the essay is actually contributing to the discrimination of the Bible. This instantly detracts from the author’s argument because this places a biased predecessor on the information to come. The author places emphasis on the fact that there is no reason why gay marriage should be illegal.

Don't use plagiarized sources. Get your custom essay on
“ Lisa Miller “Our Mutual Joy…” ”
Get custom paper
NEW! smart matching with writer

Proving her essay to be void of valuable information, this author did not effectively and correctly present the facts on why gay marriage should be legalized in the United States. The question of whether or not the Bible permits homosexuals to be married in a sacramental sense has been a controversial topic discussed across America for years. Author Lisa Miller feels that gays should be allowed to be married for reasons such as the out – datedness of the passages found in scripture, unclear statements made throughout the Bible, and for the sake of equality among all people.

She believes that most people who are against gay marriage are 100% for marriage according to Biblical text. She puts opponents of gay marriage in a negative light when talking about how they would refer to the Bible as a “how to” script for marriage (Miller 228). When referencing the Bible she states how according to scripture, there are no reasons why gays shouldn’t get married, but tons on why they should.

When talking about the “traditional family” as far as conservatives are, she states how traditional families are rarely found, showing that she chose to give her opinion in her essay (Miller 230).

The author believes that there is no different between old couples or infertile couples getting married than homosexuals who cannot reproduce getting married. “Be fruitful and multiply” is a phrase said by God in which homosexuals cannot relate to. She follows this up with stating that the “authors of the Bible” could not have imagined how much the world would evolve to accommodate the needs of old/infertile people. Lisa Miller has an argument for gay marriage that has a literalist foundation, but poor supports to her point. While referencing a fair amount of religious leaders,

she manages to take her essay in the wrong direction. Speaking briefly about the history of homosexual relationships, the author forgets one important part when stating her “facts”; where she gathered such information. Opinions are not the way to convince readers, and that is what the majority of her statements are. An example of this is when she talks about readings found in Leviticus. “The Bible does condemn gay male sex in a handful of passages. Twice Leviticus refers to sex between men as “an abomination” (Miller 230). ” So here it is, proof that the Bible condemns male sex right?

According to Miller, these are “throwaway lines that are outdated”. Apparently, we no longer heed to Leviticus because the world we live in today has changed so much past its parameters. Nowhere does she cite where she received the information about Leviticus being outdated, or proof that it may be. In the previous paragraph, she states how the Bible will forever be an accurate representation of the world that we live in today, and that it is always an account we can reference to. Therefore, her entire argument about the passages from Leviticus are now insignificant to her argument because she is making contradicting statements.

This is appealing to the readers’ ethos by there not being any accurate, proven information present what the author is saying, moreover, how could we ever be convinced when there is misleading information used? The author attempts to appeal to the emotions of her readers by incorporating pathos into her work by discussing relationships between friends and family as well as love for one another. Miller really likes to use her own opinions and perspectives when talking about the stories in the Bible.

When talking about King David and his friend Jonathan and their love for each other, the point that they may have been romantically involved with each other comes up. There is no evidence that there was any sort of sexual relationship going on between the two men. The author states that “what Jonathan and David did or did not do in privacy, is up to imagination (Miller 233). ” This is obviously an opinion based statement because there are no hints present in the passages about the two men that there was anything other than platonic involvement with each other.

When using ethos to analyze this, it is clear that there is no logical explanation for why this would help her argument on gay marriage. It is not related to her thesis, also there is no source sited for where she got the passage. As if the reader has not already been turned off by her biased opinions yet, she really gets herself into trouble when she makes many generalizations about Biblical stories as well as scripture while talking about whether or not gays should be married in the same sense that heterosexual couples are.

In attempt to strengthen her essay by citing Pastor Terry Davis, she ineffectively argues how homosexual marriage should be treated no different than traditional marriage. The pastor states: “I am against promiscuity- love ought to be expressed in committed relationships, not through casual sex, and I think the church should recognize the validity of committed same-sex relationships. ” The reason why this point does not support her argument is because this Pastor purposely avoided the controversial word “marriage. ” Some churches have holy unions or blessings, which this pastor is likely referring to.

Miller is attempting to argue for same sex marriage, therefore this makes the statement from the pastor even more hurtful towards her essay. Miller attempts to save herself in another area in her essay as well. When trying to argue that same sex marriages are nowhere prohibited in the Bible, we find her rebuttal to be inadequate because it is clear that she did not educate herself before stating what she did. When Miller incorporates a direct quote from a minister, she ignorantly states that “the Bible and Jesus neither explicitly define marriage as between one man and one woman.

Furthermore, she follows this statement with an unsupported personal opinion that “no sensible modern person wants marriage to look in its particulars anything like what the Bible describes (Miller 229). ” All it takes is to open the Bible to 1 Corinthians or chapter 2 of Genesis to verify that marriage is meant to be between two people of opposite sex. Not doing her research and her continual use of opinion-based statements proceeds to hindered Miller’s argument because it is not logical.

After reading this essay, readers will not be swayed to agree with Lisa Miller and her perspective on gay marriage because she uses ineffective methods in attempt to “educate” readers and also bases the majority of her information on biased opinions and frivolous facts. By making many logical fallacies about the timelines present in the Bible regarding what is relevant and what is outdated, she author speaks herself in circles leading back to the same question over and over again, should gay people be married in the same sense that straight people are?

When she agrees that they should, her support for her opinion is that it would be unethical if we denied people of marriage due to their ethnicity or skin color. Completely disregarding her thesis statement and making obvious logical fallacies about the differences between race and sexuality, the author presents a completely invalid point when attempting to appeal to the authors’ sense of reason and ethics. 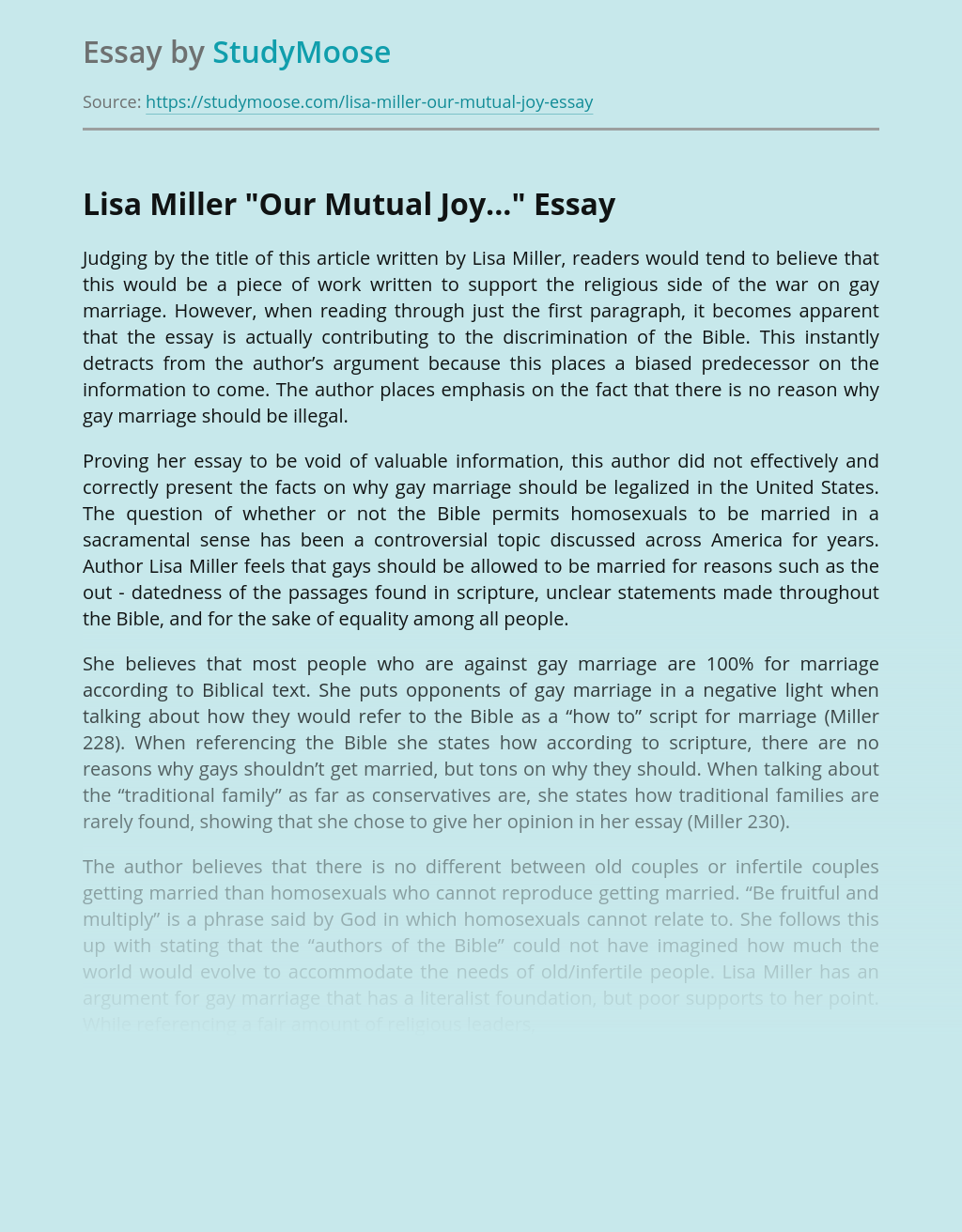