Garden of Eden and Utopia

Everyone has an ideal world in which they’d want to live in. Of course no one wants to live in a place in which there is violence, cruelty, bad energy etc. But, for some, in order to achieve their ideal perfection of a utopia; they must do anything in their power to get close to what they have envisioned there ideal place would be like. Sure, some may say there is no such thing as perfection, others think otherwise. With variety of opinions whether a utopia can exist there many conflicts too many opinions and believes.

Don't use plagiarized sources. Get your custom essay on
“ Garden of Eden and Utopia ”
Get custom paper
NEW! smart matching with writer

Filmed by the director Guillermo Del Toro “Pan’s Labyrinth, section of Walden by Henry Thoreau and Genesis three, shows how dystopia is introduced as the story goes along. Because so many want to achieve utopia, many believe that the idea of having a perfect society does not exist and eventually will turn into chaos. In the movie Pan’s Labyrinth, the idea of a perfect utopia was displayed by one, going back to the years after the Spanish Civil War, in which “La guerilla” (the rebels) tries to fight the military of Spain.

The purpose for the rebels to fight off the Regime was to oppose to the new government that wanted to control and create a New Spain. These rebels were not happy since they had different believes that the new government was strongly to oppose which was equality. Because both were displeased a war broke out and Spain was in war with itself.

Both sides thought society could be run better if things either changed or stood the same. Having a war was a step of creating a utopia, but created a dystopia at the same time, for the simple fact that it created so much chaos and violence.

There were many death, even, injured men who fought for their believes. Two, El Capitan Vidal who controls Spain’s military believes that fighting, things will go your way, he believes that they will give up due to the fact the rebels do not have enough food, armor nor enough men to win the battle. However not only does he have to deal with these rebels trying to win this battle but he also has to deal with his impregnated wife Carmen along with her daughter Ofelia. Ofelia being a young child with such a big imagination notices the domination that her new “stepdad” has towards her mom and she cannot do anything but obey.

As the movie progresses, you could imagine how Ofelia dos not feel the love from her mother due to a delicate pregnancy and her stepdad that cannot stand her at all. There is no utopia here but a dystopia in Ofelia’s world and it is understandable in her eyes to realize that she lives in tough times but need the care and love from both adults. Every child desires to love and to be loved back, you don’t want to feel as if people don’t care nor bother to appreciate you for the smallest things, but for Ofelia is different.

Because of the lack of care she receives in the real world, she relies on her fairytale stories not to just comfort her but to let he explore the magical place in which she wants to go and call home. Since the Captain is more eager and cares more about changing Spain he forgets his family and puts them to the side. As the movie almost gets to the end, the Captain seemed to start losing control of what he had once had control of. Though he showed strength and devotion towards his country many of “his” people were spy’s for the rebel and worked for him.

At the end of the movie, El Capitan Vidal is surrounded by the rebellions after killing Ofelia inside the labyrinth and he now realizes his troops and himself were defenseless and rounded up. After trying to make all these changes to Spain and putting so much effort in trying to defeat the rebellions, his idea of perfection collapses in a matter of minutes To create a utopia you must obey and never question nor answer back. According to Genesis three, God created man and woman already who he called Adam and Eve.

These two first humans were in the Garden of Eden and God had clearly told them “You shall not eat of every tree of the garden? ” So they obeyed and did what God told them what to do. Adam and Eve were just humans who thought everything was roses and ponies, their world was perfect; no harm, they ruled the earth. God to them was someone to look up too so they did what he told them to do. However, everything changed when one of the animals God created deceived Eve to eat an apple from the Garden of Eve. At the end she ate this apple and convinced Adam to eat; all of a sudden both gain so much knowledge and realize there both nude.

They knew they disobeyed God, they knew that something was going to happen and it actually did. God punished both Adam and Eve severely and it’s obvious that God reprimanded both for not obeying, God obviously started setting rules and he didn’t like the simple fact they didn’t go by one rule he expected them to follow. A place where everything was supposed to be unlimited to both became a nightmare when both went against God’s will. Nothing turned out to be perfect. Deciding to live in the woods and leave everything back is very hard to do, but it can be done.

In the section of Walden, Thoreau decides to live in the woods because he has realized that he has not lived his life. Most people would think that he is insane for wanting to live in the woods and leave everything behind him just to explore Mother Nature. People would love to live in rural areas, but Thoreau decides that he will want to live here because it is a choice he made. Usually society would think this is wrong, just because it’s thought to be game but then Thoreau seems like he doesn’t care and wants to be able to explore.

That is why he is telling the reader the reason why he is doing this. In conclusion trying to reach utopia means doing so much that can lead to destruction, even lives destroyed. To reach perfection is like reaching something impossible, and when you try to reach hard there rare chances of getting to it or reaching it. Chaos and an imperfection society is what we live in now, and no one has a full vision of what a utopia should be. Different mentalities, different livings, its hard as a society even a nation to decide what’s right and wrong.

Garden of Eden and Utopia. (2018, Sep 02). Retrieved from https://studymoose.com/garden-of-eden-and-utopia-essay 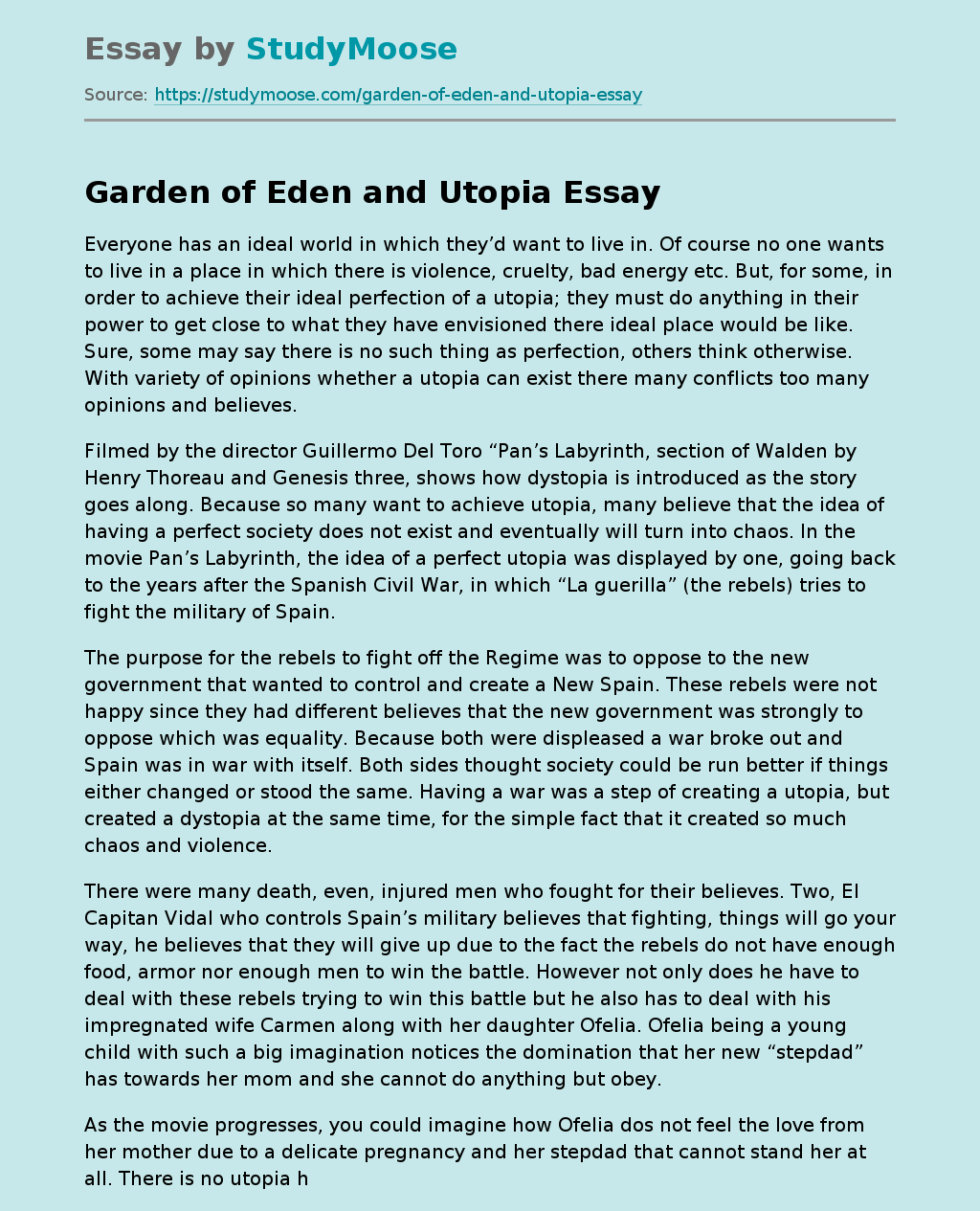