"More's Utopia exhibits all the strengths and weaknesses of the genre"

Utopia and utopian writing challenge fundamental truths in society and common sense. In challenging the underlying categorisation of society, utopian writing shows strengths by creating worlds where harmony exists between humans and their surroundings. Saint Thomas More’s Utopia is no different in this regard. It also exhibits strengths in the Christian origins of Utopian writing with the idea of a harmonious society and the idea of Eden or paradise. It can also be linked with ancient Greek ideas of happiness and eudemonia, or leading a good life.

Don't use plagiarized sources. Get your custom essay on
“ “More’s Utopia exhibits all the strengths and weaknesses of the genre” ”
Get custom paper
NEW! smart matching with writer

Although utopias are unachievable dreams, this is their point. They offer dreams and ideals for society to move toward. More’s Utopia is no different in this respect.

One of the key issues of utopian writing is discussed early on in book one of Utopia. The issue of the individual verses society. In a discussion, one of the characters quotes: “I do not see any other way in which you can be so useful to your friends and the general public in addition to making yourself happier.

”1. The reply to this is even more interesting as Raphael calls the idea ‘absolutely repellent’. The point is that one individual’s view of utopia is entirely different to the next person. Utopias are deeply individual views of a way in which a society should be run and a life lived. More’s Utopia is no different but the fact that it is unachievable is not a weakness of the text, far from it. It is strength in the fact that it is unachievable as it gives the individual something to move toward and helps with the progression of society over time.

Continuing on from this argument, More’s Utopia illustrates another key point about utopian writing in general. It also answers one of the criticisms levelled at utopian writing in that the writers should concentrate on changing what is already wrong with society rather than dreaming of unachievable goals. What is shown is an attack on the way in which society is run and although not an outright attack on traditional values and sovereignty, it is a challenge to the status quo. By raising and questioning these issues of tradition, religion and the law, More’s Utopia exhibits another strength of the genre. Rather than simply dreaming up unachievable goals, they challenge the perceived norms and imbalances in power that the writers have observed in their respective societies. By challenging tradition and what is perceived as common sense, utopian writing does tackle the wrongs in society by making people aware of them and sharing an idea of utopia with others, it provides society with a goal to move toward. Rather than providing a quick fix solution to the problems in society, a long-term goal is provided so that society may progress over time to strive for but never achieve. To paraphrase Locke, life without struggle becomes inert. Utopias and Utopianism keep society struggling and mobile.

The Christian origins of utopian thought are also observable in book one of More’s Utopia. It also plays with the Christian concepts of Eden and harmony. Most importantly it discusses issues that did go on to stimulate thought and action by others in society. Hythlodaeus’ idea that all private property becomes ‘utterly abolished’ is important to left wing politics and Marxism, whilst the other end of the debate can be seen in the writings of Locke. Apart from raising issues that were taken up by other key political thinkers and philosophers, it shows an acceptance to religious ideas and that a man’s conscience should make him want to lead a life that benefits others rather than living totally for oneself.

“Utopia therefore illustrated how and under what conditions conscience could be so effective. It showed a society in which law, social pressure and conscience converged in the direction of goodness.”2

It is in this discussion of the individual versus society that More tackles another of the key issues of utopian thought and writing. More’s Utopia seems to reject the concept of individualism by placing constraints on the individual. The tackling of this issue has been criticised by some as not a utopia but as dystopia. Indeed to someone like Locke the lack of private property may seem like a dystopian nightmare.

“the image of the free man striving for constructive self realisation is not happy perfection and merry discipline but permanent oppression, the coercion of violent, self preserving idealism.”3

This is another example of More challenging the perceived realism and categorisation of society. He challenges the idea of individualism in favour of the community. At the time of his writings, this was quite radical thinking. The concept of a moneyless society is also addressed here by More. A society where every person’s daily work provides for the good of the community allows it to transcend the need for material wealth. With everyone in this utopian society working toward a common goal, then each individual, in More’s view, would be able to fulfil their potential. It is here where it could be linked with the writings and the teachings of Aristotle. In Aristotle’s Ethics he discusses how the purpose of a human being is to achieve eudaimonia or a good life. With human kind free from the constraints of the acquisition of wealth in More’s Utopia, then it would seem possible that the whole society has the chance to achieve this. Although these concepts are obviously unachievable the ideals and concepts which More challenges are those that are deep-rooted in society. More acknowledges this fact and realises that change will take time. This is another strength of the work in the fact that it discusses ideals that the individual can relate to and still create an impact many years later.

On reflection then, More’s Utopia displays both the strengths and the weaknesses of the utopian writing. With the ideals of the work taken from the Christian origins of More himself, his utopia becomes a sort of Eden and a place of harmony. Although it may be dismissed by some as fantasy and fiction, the fact that it challenges the society that it stems from is part of it’s strength. It’s discursive style helps to make it accessible to the individual, which in turn helps to create ideals for the individual. It incites the reader to aspire for something different by challenging the categorisation of society. Although this other place may not be as attractive to some as it is to others, the fact that it has an effect on the reader is strength nonetheless. It is a work that asks the reader to question their surroundings and try to change them for the better.

"More's Utopia exhibits all the strengths and weaknesses of the genre". (2020, Jun 02). Retrieved from https://studymoose.com/mores-utopia-exhibits-strengths-weaknesses-genre-new-essay 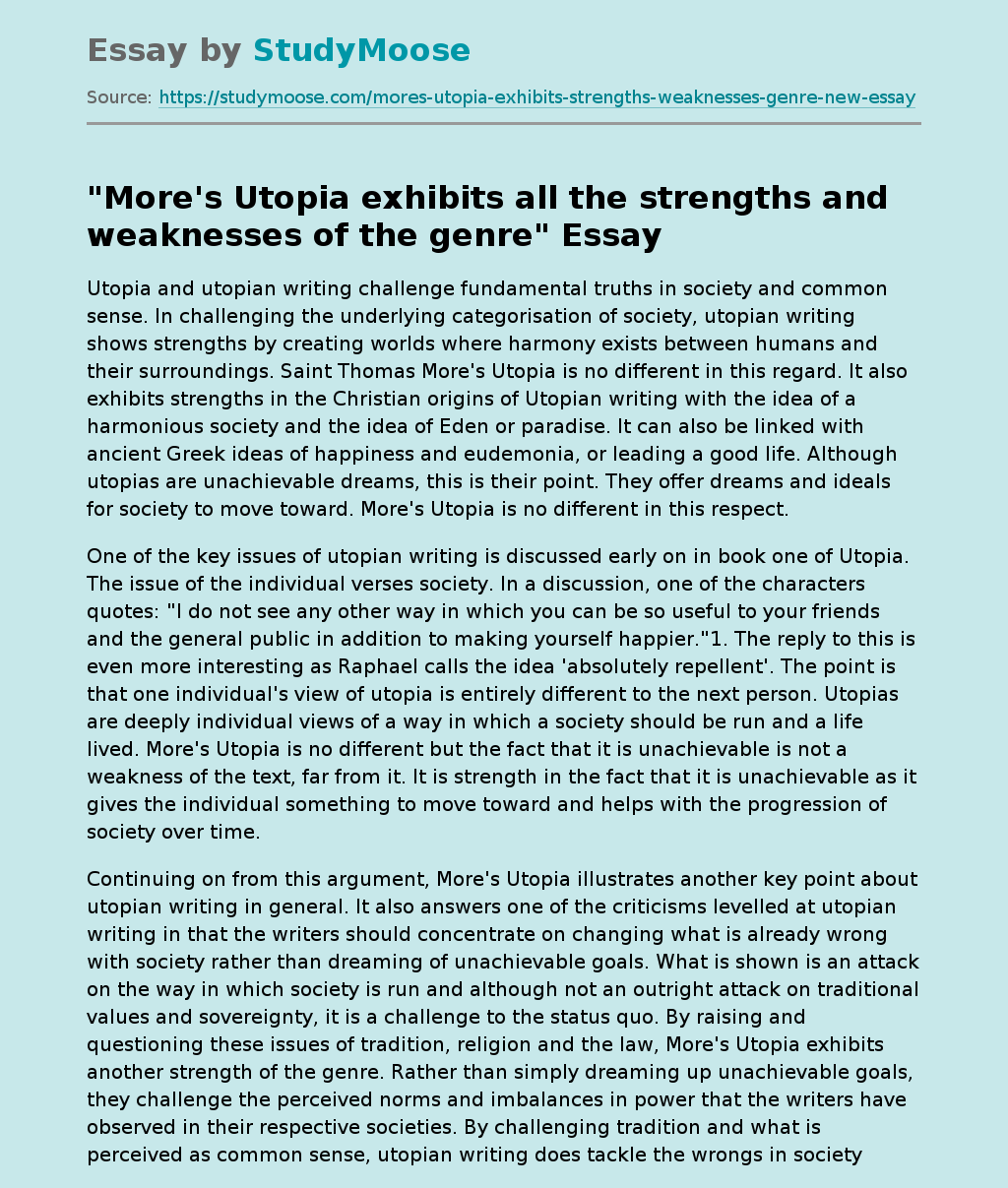