Utopia and Dystopia in Literature

When the elite work to achieve a Utopia, everyone else ends up in Dystopia. To begin, let’s define these two different societies. A Utopia is a state of things in which every aspect of society is ideal; equality exists in economics, government and justice. A Dystopia is a state in which there great suffering and injustice. They are total opposites however, the reality is nothing is or will be perfect, that is Utopia for one person turns into a Dystopia for another.

Don't use plagiarized sources. Get your custom essay on
“ Utopia and Dystopia in Literature ”
Get custom paper
NEW! smart matching with writer

. What does a Utopia actually look like? Some people see it as a world of strict morals, clear social order, and diligent study. Others imagine it as constant pleasure and fun. Someone else sees it as a world of unstructured relaxation and peace. These visions are not only different, but they contradict. So who’s Utopia will it be and what happens to everyone else? Even in this good world, some will be happy and some will be miserable.

In my ISU novel, And the Mountains Echoed by Khaled Hosseini, we see this happen by analyzing the following passage through a marxist lens. “My father is not a thief!” Adel shot back. “Ask anyone in Shadbagh-e-Nau, ask them what he’s done for this town.” He thought of how Baba jan received people at the town mosque, reclined on the floor, teacup before him, prayer beads in hand. A solemn line of people, stretching from his cushion to the front entrance, men with muddy hands, toothless old women, young widows with children, every one of them in need, each waiting for his or her turn to ask for a favor, a job, a small loan to repair a roof or buy milk formula.

” The elite, Adel’s father is attempting to solve the village’s problems with his wealth and power. However, later on we learn that this man demolished many houses from the village to build his own mansion. One old villager asks to talk to adel’s father about his demolished house, however, he is forbidden from doing so and when he attempts to, chaos ensues and he’s never to be seen again. We can see how in the process of attempting to rid of a society’s problems, someone else is taken advantage of and oppressed. This is also reflected in history.

During WWII Hitler has power over Germany. He promises to create a country where everything is ideal. But, it happens at the expense of the Jewish community in Germany. Hitler made many assurances to citizens, in order to stay in power, most of which he did not keep. The citizens lost faith in their government. Hitler promised them relief. Hitler blamed the country’s problems on corrupt politicians, communists and the Jewish. He used propaganda to convince citizens that if they got rid of these groups, all of Germany’s problems would vanish and the whole country would flourish. This is him spreading his Utopian vision for Germany. The people who protested his ideas were faced with violence. Many were forced to leave the country. Hitler was portraying Germany’s future as a Utopia while others were suffering and being shut down by authority. Gilead, the society in The Handmaid’s Tale by Margaret Atwood is another example of a failed utopia. After a decline in birth rate and reproduction, the handmaid’s sole purpose becomes giving birth. They are denied sexual freedom and forbidden from falling in love. Male doctors who formerly practised abortion, homosexuals, priests and nuns who took vows of chastity are executed with their bodies displayed on a walk. In addition, pornography, infidelity and sexual violence are all forbidden. Gilead is attempting to bring citizens closer to God and nature, seen when they reduce women to their biological function. This causes suffering in citizens of low class, especially the handmaids, while the wealthy commanders, wives and aunts don’t need to sacrifice much. The people who stand up to authority are executed which illustrates the dystopian nature of Gilead.

Here’s a modern day example. An article titled “How Capitalist Utopia Became Everyone Else’s Dystopia” discusses how American elites ruined their society. The chart shows how the American elite mismanaged the economy so fatally. To summarize, the article explains this as “a utopian mission to turn the lead of capitalism into the gold of prosperity for everyone. But lead doesn’t turn into gold.” Europeans could enjoy the necessities of life at reasonable prices whereas in America capitalist produced things such as healthcare, education, finance and media. However there was no intention of producing these things to be affordable, at high quality or even completely. In the end Americans are forced to pay extremely high prices for the basics of life, that are offered only partially. The article talks paradoxes such “fresh food costing three times as much as frozen food, basic medicines like insulin costing thousands, childbirth priced at half an average person’s yearly income. And some things just weren’t available to many at all. No “health insurance”? Sorry — you die. Bad “credit”? Sorry — no housing. Want that cutting edge cancer drug? It’ll cost you $500K — but for Europeans, it’s free.” lists the article. The American elite kept taking capitalism to the extreme. They wanted prosperity however took it too far, turning the dream of a capitalist utopia into a dystopian reality. America’s utopian dream failed because they tried too hard “turning lead into gold”. From the moment a Utopia is established the need to sustain this society would end up in Dystopia. To maintain a perfect society where all human needs are met requires the suppression of human nature. To achieve Utopia we need to remove these sources of inequality and division but we would require more oppressive dystopian methods to enforce the system. And who enforces this system. People with authority, wealth and power. Utopia is the dream and dystopia is waking up from that dream.

Utopia and Dystopia in Literature. (2020, Sep 16). Retrieved from https://studymoose.com/utopia-and-dystopia-in-literature-essay 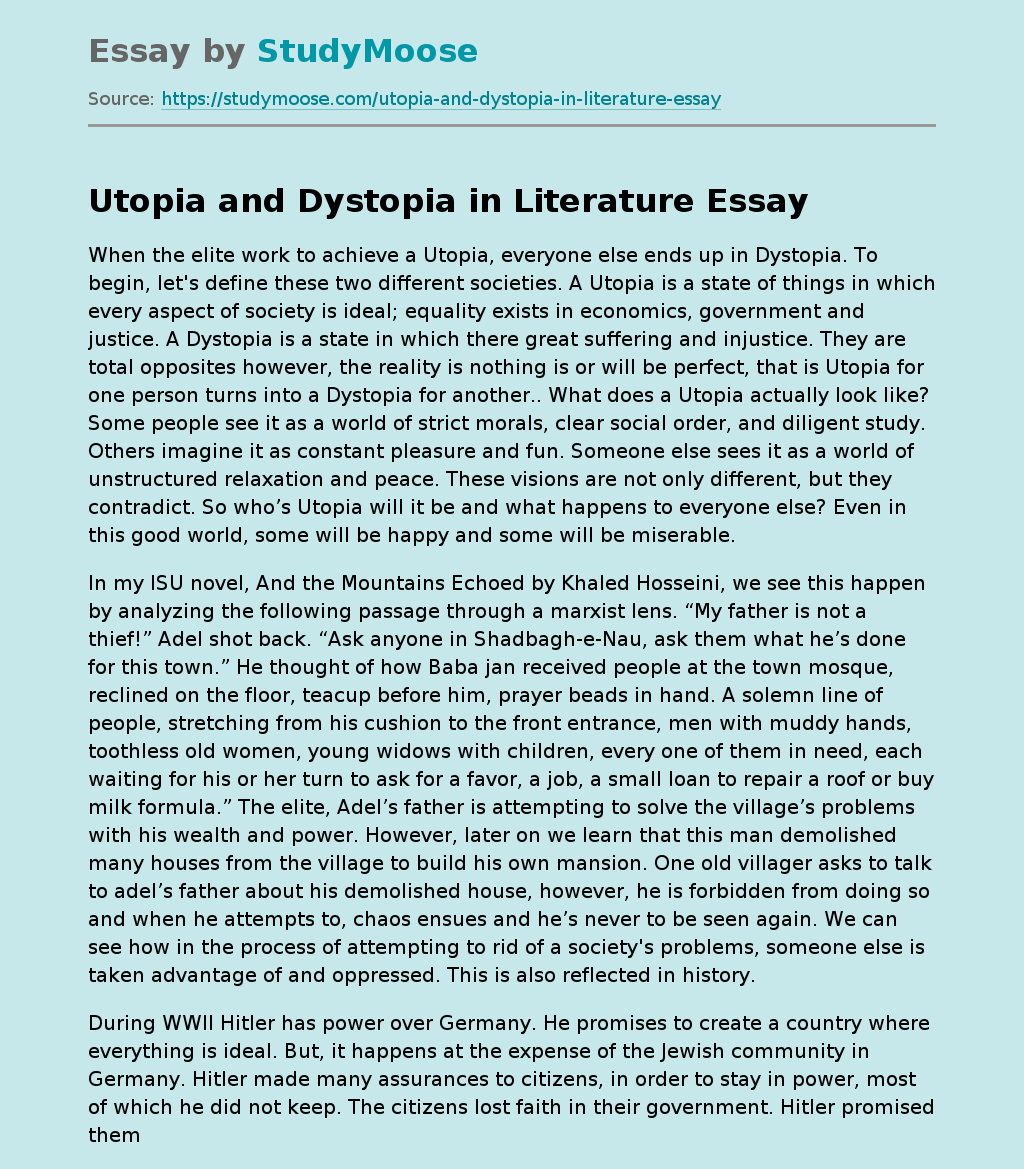