The “Middle” Ages were followed by the Renaissance, a time in which art and literature flourished. Thomas More, the first English humanist of the Renaissance, was born in London during this period. More’s style is simple because of its colloquial language but a deeper look into his irony hints at deep dissatisfaction with the current thought and desire for change. “Utopia” (which in Greek means “nowhere”) is the name of More’s fictional island of perfected society. Thomas More’s “Utopia” was the first literary work in which the ideas of Communism appeared and was highly esteemed by all the humanists of Europe in More’s time.

Don't use plagiarized sources. Get your custom essay on
“ Thomas More’s Utopia: History and Analysis ”
Get custom paper
NEW! smart matching with writer

More uses the main character, Hythlodaeus, as a fictional front to express his own feelings he may have feared to express in non-fiction because of his close ties with the King Henry VIII.

In the first of the two books that make up “Utopia”, the author gives a profound and accurate picture of the European citizens’ sufferings and points out the social evils that existed in England at the time.

Hythlodaeus (More) begins his assault on feudalism by explaining that his views and the ideals of Utopia can never exist without common land. At this time, feudalism was still the dominant social order in most of Europe. As the enclosure movement began in Europe, most of the land was beginning to be closed off to farmers and was sectioned off for grazing cattle and sheep. This exacerbated the already desperate situation in England in which poor farmers were only able to have land by paying their land-owner with the crops they harvested from the land with little to no profit for themselves.

More creates a Utopia in which people do not attempt to expand their frontiers and even give their surplus from the harvest to their neighbors. This greatly contradicts the ideas of capitalism, which was growing rampantly in 16th century Europe, where currency was quickly replacing pay by means of crops or services. Utopia, in contrast, had no form of currency. Hythlodaeus goes on to explain that “[e]lsewhere people talk about the public interest, but pay attention to their own private property. In Utopia, where there is no private property, everyone takes their duty to the public seriously (More, 109).”

“Utopia” was a desperate attempt by More to find a solution to Eurpoe’s economic crisis which he thought were caused primarily by the new practice of capitalism. More’s answer to these problems was to change the economic system from an entrepreneurial system, to one which is often described as socialist. More’s socialist tendencies derive mainly from an attempt by More to solve social ills, not an economic solution to existing social problems. More stresses his minor concern for material gain when he satires Europe’s insatiable desire for gold by making it a completely insignificant metal to Utopians. They use it for prisoners’ chains and to buy off other countries, not as a precious sign of wealth and prosperity.

Utopian government was a far cry from the long lines of descent that ran the political, as well as religious, offices in the majority of countries in Europe at this time. The corrupt nobility throughout Europe exercised their power to place friends and relatives in positions of power to further their own desires. In Utopia, citizens must be elected, voluntarily, by the people without a campaign. The Utopian government is run as a republic, where households choose a manager or Philarch who in turn reports to a senior Philarch. The senior Philarchs meet in a commission run by the chief executive. Unlike Europe in More’s time, no one person could inherit status, but had to be elected into office or reduced in rank to slavery.

The education and occupational aspects of Utopia greatly resembled the thoughts and ideals that the Renaissance and humanism movements embodied and More respected. Emphasis was placed on learning a trade of interest and Utopians were never forced to work long, undesirable hours and were consequently left plenty of leisure time to engage in intellectual pursuits. The humanist movement stressed similarly the need for lay culture to expand itself in education and the arts. All Utopians also received a full education, which contradicts the overwhelming percentage of uneducated, illiterate people that existed throughout Europe in the 16th century.

In Utopia there are strict marriage rules and the men and women are not allowed to marry until certain mature ages: men 18; women 22. Most importantly, however, Hythlodaeus points out that divorce is not allowed unless in cases of adultery or extreme abuse. When King Henry VIII was ruling England, Sir Thomas More was the King’s Lord Chancellor. At this time the King was fighting with the Pope to get a divorce from his wife. More, a devout catholic, did not approve of the divorce and voiced his opinion discreetly in Utopia’s disregard for divorce and more openly later in his life. This eventually, led to his demise when King Henry VIII imprisoned More in the Tower of London and, finally, had him beheaded.

Hythlodaeus goes on to talk about the self defense and the non-imperial nature of Utopian society. Utopians abhor war and attempt to avoid fighting except to protect themselves, their neighbors, or to free oppressed people. This is partly due to the fact that there is communal land in Utopia. Utopians, as completely self sufficient people, have no need to take over neighboring countries. At this time in history, countries not only in Europe, but all over the world were in constant conflict to expand their empires. More concludes Hythlodaeus’ thoughts on war by talking about treaties. Utopians don’t believe in treaties because they feel that a country’s word is strong enough to trust. Hythlodaeus finishes by sarcastically claiming that of course Europeans always hold to their treaties.

Lastly, but possibly most importantly to More, Hythlodaeus begins to speak on the topic of religion and spiritual life. There are a multitude of religions in Utopia and all of these religions, although enormously different from each other, coexist, are respected, and even worship in the same place together. More’s catholic beliefs can be seen from his description of solely monotheistic religions and the Utopians disrespect for any form of atheism. Utopian priests are of the greatest moral and religious caliber and are seen as the most powerful people in Utopian society. These priests perform all of the religious services and are tolerant of all religions. Additionally, an enormous emphasis is put on the afterlife. Utopians believe that the soul is immortal and the deeds and morals of your life determine one’s afterlife. For this reason, Utopians, Hythlodaeus explains, concentrate on “true pleasure”, such as knowledge, fulfilling a duty, or exercise.

They denounce any material goods or pleasure such as appearance or wealth to hope they will be rewarded in the afterlife. This contradicts the secularist movement which also swept through Europe along with the Renaissance and humanist movements at the time of More. The secularist movement stressed living life to the fullest and material goods. More criticized both the clergy and capitalism of the time in this section and attempted to show the necessity for clerical reform in the church by stressing the sanctity and strict adherence to integrity and morality by the priests in Utopia. More had a strong desire to reform the Church and refocus the religious leaders to care for its people and not material gain, which is evident with his focus on religion in much of Book II.

In Utopia, the author, Thomas More, uses the main character Hythloday to express his criticism of 16th century European society and suggests a revolutionary social system of equality, freedom, and happiness. More’s radical ideas were vastly different from the beliefs held by European hierarchy and even many of his fellow humanists at the beginning of the Renaissance. With the height of feudalism, the rise of capitalism, and the start of the enclosure movement in Europe, Utopia is introduced as a possible answer to the growing problems in Europe in the mid-late 1500’s. In his ironic call for reform, More, through the gauze of fictional Hythlodaeus, explains the ideal industrial, social, educational, political and religious system that exists in the land of Utopia.

In writing Utopia, More was attempting to spark people’s attention and effort to reverse the downward spiral of European society. More used “Utopia” as a blueprint for radical change and a call towards preserving medieval and Christian beliefs, practices, and values. More did not intend his vision of Utopia to be followed literally, and never thought it could be. More did, however, wish to give an example of a “perfect” society which Europe could emulate. 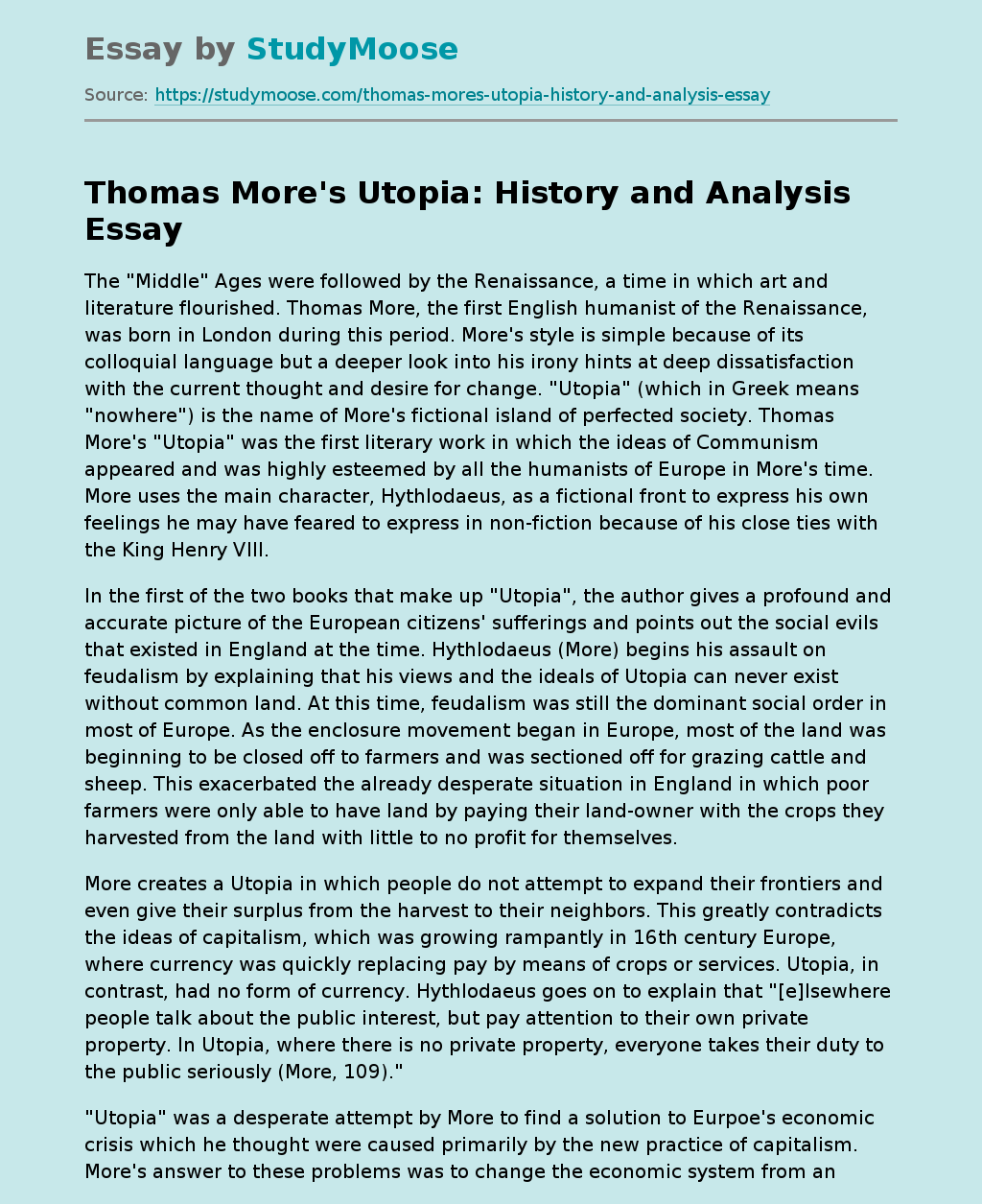