Freedom of Expression in the Philippines

“Give me the liberty to know, to utter, and to argue freely according to conscience, above all liberties. – JOHN MILTON

Individual freedom and collective expression in the Philippines, I’d say, is the most exercised and an unmistakable sign of this country’s democracy. Our individual rights and freedoms, the most basic, the essential to the complex and critical ones define our identity as Filipinos, and the basic extension of our humanity. That need to express, to communicate, and to reach out to one another without the fear of judgment or even criminal prosecution.

Turn in your highest-quality paper
Get a qualified writer to help you with
“ Freedom of Expression in the Philippines ”
Get high-quality paper
NEW! AI matching with writer

We have the freest press, the most uncensored and unrestricted provisions on our freedom to express ourselves, to seek other people’s take on relevant issues and sometimes just so, because we want to and because we can. And when these are stripped of us, we resist. We react, and to some extent violently and rebelliously just so we can send that fierce message that as a democratic country, with the collective freedoms and rights declared in our charter, no one has the right to deny us of those rights and freedoms.

But sometimes, too much freedom can mean abuse of freedom. And restrictions or not, these freedoms aren’t absolute. One is still liable to what he says, especially in public. As professionals and practitioners of the press, they are responsible for balanced views and opinions. Slander, libel, false accusations and any other form with malicious intent is tolerated by freedom of expression. One cannot accuse someone of something and invoke his freedom of expression, and expect it to give him immunity from the law.

Under the Bill of Rights of the Philippine Constitution, Article III, Section 4 declares: “No law shall be passed abridging the freedom of speech, of expression, or of the press, or the right of the people peaceably to assemble and petition the government for redress of grievances.” But it wasn’t too long ago when the infamous Cybercrime Bill was signed by the president. It bore flawed provisions that largely outraged advocates of freedom of speech. It awakened this fire not only to these advocates but to ordinary Filipinos who was suddenly faced with the possibility of being denied of this freedom. It scared some. And now the Bill is on a temporary restraining order after much protest that involved hacktivists hacking government servers and websites. The President’s website down to other departments weren’t spared from their wrath. Rallies and demonstrations plagued the major government offices. Even the press expressed its dismay on the unreasonable grounds the bill imposed. And thus, this freedom prevailed.

That is why most men dread it. – GEORGE BERNARD SHAW

How many times have we seen major political figures get away with it? How often have seen them actually pay for their wrongful actions?
Seldom, if not never.

I’m not going to expound much on the issue of legal independence, though it’s another critical criteria of good governance that somehow connects with this issue. The ‘influence’ of the executive and legislative branches respectively, to our judiciary, though less people wants to admit it, is not unheard of. I would even go as far as saying that appearances aside, alliances between people from these three legs of our system speaks volumes if we want to talk about partiality, of justice being served, or of the judiciary protecting people from the other two branches.

Ex-chief justice Renato Corona’s historic impeachment can attest to this connection. People have been talking about Corona’s alleged alliance with GMA ever since he was appointed by the latter, have sprouted suspicions and dirty allegations and from that standpoint, when the chief justice’s public image is tainted, people will not just talk of injustice. Regardless of its truth or falsity, in their eyes, the then chief justice must no longer be a chief justice. Then came his impeachment, which was on the grounds of not declaring assets and liabilities on his SALN, which then comes to light a public official’s dishonesty or honest mistake of omission, we will never know. After that excruciating days of examining the facts and arguing from point A to point B about this and that in the senate, I don’t think it had achieved much but prove a point.

A point that I guess is a starting step into holding a public official responsible for his action. It’s a welcomed change. But let’s look at our former president, Gloria Macapagal-Arroyo. Somehow, she’s still out of the clutches of accountability to her grave misdeeds in office. Her audacity not to resign when reasonable proof has been unearthed of her alleged influence on the 2004 Presidential elections. Evidences, though illegal or circumstantial surfaced, or did you forget the wiretapping Hello Garci scandal. Those tapes allegedly suggested that Arroyo ordered the rigging of the national elections for her to win by around one million votes against the late Fernando Poe, Jr.

However, she indeed conversed with COMELEC commissioner Virgilio Garciliano, and it was a ‘lapse of judgment’ on her part and made the most talked about apology in television. Her alleged cheating and electoral sabotage induced public protests, to no avail. Several impeachment attempts have followed. Three separate complaints ensued. One in 2005, and then another in 2006. All defeated and trashed in the House of Representatives. Now what does that say of our system under her presidency? In October 2007, lawyer Alan Paguia filed an impeachment complaint against Arroyo in connection with the issue of bribery. Paguia’s complaint was based on the revelation of Pampanga Gov. Ed Panlilio that various governors received

half a million pesos from Malacañang. The impeachment case, as of the middle of October 2007, has already been referred to the House of Representatives Committee on Justice. Now what? Is it sitting there somewhere in the House with dusts and was ultimately forgotten?

Her presidency, shrouded in controversy, was probably the worse after Marcos, though in the same light, we can’t deny their contributions in the country’s economical improvement. But accountability, CGMA seems to be immune to.

We saw progress on November 18, 2011 after a Pasay court issued a warrant of arrest against her, following the filing of a complaint for electoral sabotage by the Commission on Elections. At the time, she was in the hospital, so it was a House Arrest. The Supreme Court had issued a Resolution enjoining attempts by the Department of Justice to prevent her departure from the Philippines to seek medical treatment overseas.

But oh well, The House of Representatives under the leadership of Speaker Feliciano Belmonte, Jr. issued a travel permit allowing her to have treatment in Germany despite the Department of Justice hold departure order. She was released from hospital arrest on bail and refused to enter any plea on charges she misused $8.8 million in state lottery funds during her term in office. These pile of charges seemed to hang up there again, as she is currently seeking treatment in Germany.

Not to be insensitive with her health conditions, nor would I wanna say that her health conditions are just convenient lies to evade prosecution, but one has to admit of it being at the right place at the right time. Joseph Estrada was convicted of plunder and was placed on house arrest. Well at least that is some form of penalization we saw. But then, Manila had to elect him as their Mayor in the recent polls. Now what does that say about us learning from our mistakes? How can we trust a public official who had already broken our trust in the worst way possible and then elect him again and put him into a position where he can do it again? I am but a keen observer and naturally has not enough professional or political mandate to be accusing the lady of anything. However, it is my constitutional right to express myself though facts and informed judgments and personal opinions.

At this juncture, if one has to violently disagree with me and confront me in the form of a lawsuit (God, I hope not), I leave the world of Philippine Daily Inquirer columnist, Mahar Mangahas. “If any citizen is free to openly agree, but not to openly disagree, then freedom of expression does not prevail. An individual’s option to openly express disagreement without risk of any personal injury is a key part of the definition of a free society.”

Freedom of Expression in the Philippines. (2016, Apr 30). Retrieved from https://studymoose.com/freedom-of-expression-in-the-philippines-essay 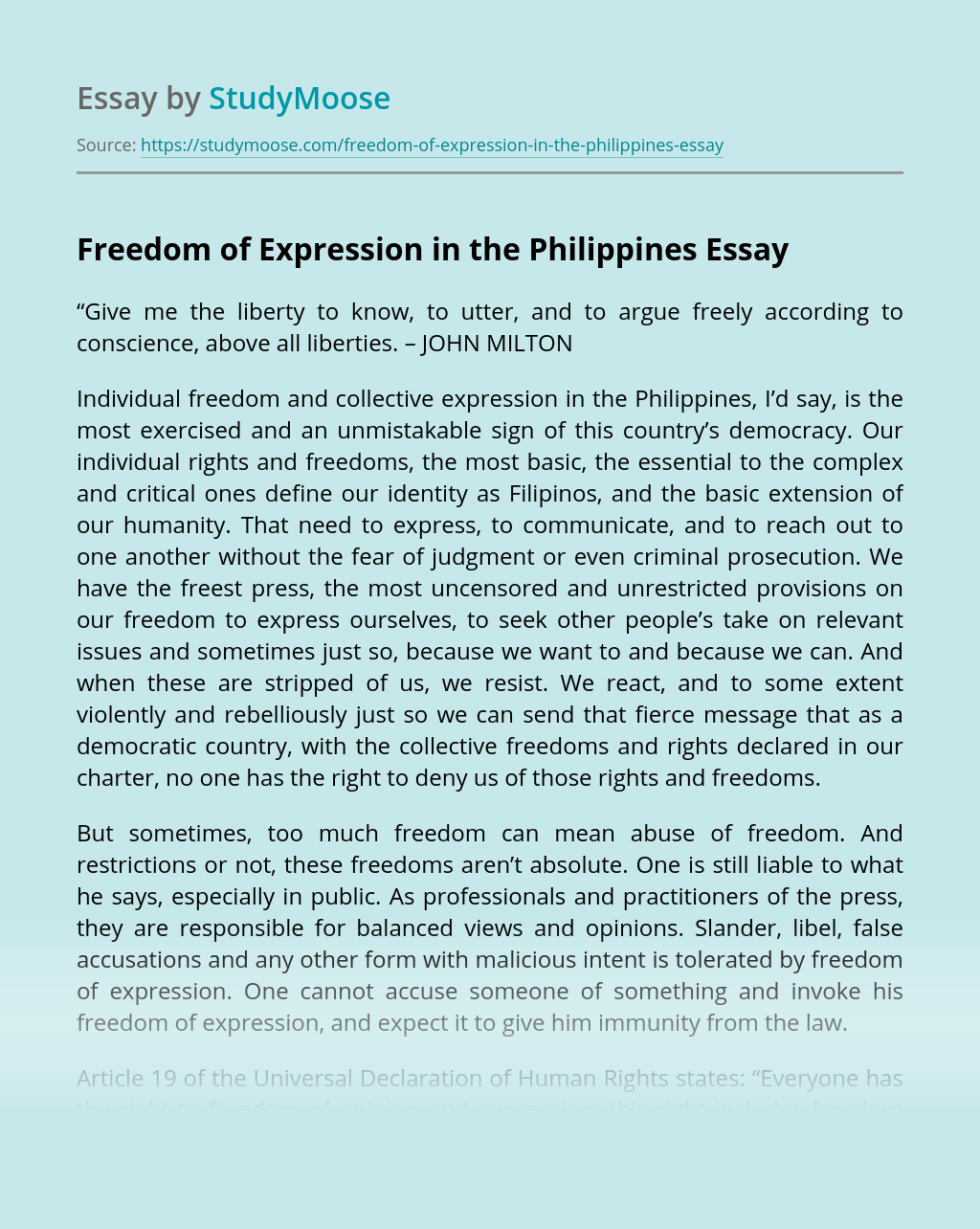 Turn in your highest-quality paper
Get a qualified writer to help you with
“ Freedom of Expression in the Philippines ”
Get high-quality paper
Helping students since 2015
Stay Safe, Stay Original