Freedom of Expression on Social Media

​Article 8 of the European Convention on Human Rights (“the Convention”) provides a right to respect for private and family life which shall not be interfered upon by public authorities “except such as is in accordance with the law” and “necessary in a democratic society.” Article 10 of the Convention further provides a right to freedom of expression, subject to certain restrictions necessary to protect the rights and reputation of others. These two articles seemingly conflict with each other, and indeed, courts often must balance these articles against each other.

Don't use plagiarized sources. Get your custom essay on
“ Freedom of Expression on Social Media ”
Get custom paper
NEW! smart matching with writer

The case, Einarsson v. Iceland, stemmed from a defamation claim concerning an Instagram post accusing the commentator of rape. In its ruling, the ECtHR held that in failing to take account of the dropping of rape charges against the commentator, the Iceland courts violated Article 8 of the Convention. However, Einarsson v. Iceland was poorly decided because the ECtHR balanced Articles 8 and 10 in a way that was inconsistent with precedent. Additionally, even though the Iceland courts were the appropriate forums to determine the classification of a statement as a fact or value judgment, the ECtHR injected its own view into the matter.

​Part II of this Note sets out factual and procedural background to the issues raised in Einarsson v.

Iceland and details the reasoning of the European Court of Human Rights (ECtHR). Part III examines the ECtHR’s analysis of the balancing test in comparison to another recent case with similar facts and then discusses its failure to defer to findings made by the Icelandic courts.

​Egill Einarsson is a well-known person in Iceland who gained notoriety by publishing articles, blogs, and books and appearing in films, on television, and in other media, under various pseudonyms. Einarsson’s views often garner attention, as well as controversy, particularly his attitudes towards women and their sexual freedom. In some instances, Einarsson went so far as to recommend that women should be subjected to sexual violence.

​On November 22, 2012, Monitor, an Icelandic magazine, published an interview with Einarsson. A picture of Einarsson was published on the front cover of the magazine, and the interview discussed the rape accusation against him. In the interview, Einarsson repeatedly claimed that the accusations against him were false, and he stated that it was clear that his accusers had ulterior motives and that the whole case was “screaming” conspiracy. On the same day, X published an altered version of front-cover picture on his personal Instagram account. The altered image of Einarsson included the caption “Fuck you rapist bastard.” X had approximately 100 “followers” on Instagram, which he believed were the only individuals who had access to the items that he published. However, X’s photos were also accessible to other Instagram users. The next day, the newspaper Vísir published an online article about X’s post, republishing the altered picture to a wider audience.

​Einarsson lodged defamation proceedings against X before the District Court of Reykjavik. The District Court found against Einarsson and determined that because the altered picture and accompanying words posted by X constituted a value judgment rather than a statement of fact, X’s statement was within the bounds of freedom of expression granted to him by law. Einarsson appealed to the Supreme Court of Iceland, which upheld the District Court’s decision. The Supreme Court’s judgment emphasized Einarsson’s own history of publishing controversial material, including his attitudes towards women. The Supreme Court found that when Einarsson gave the magazine interview with Monitor and made provocative comments about the women who had accused him of sexual offenses, “he launched a public debate and should, moreover, have known that his comments would result in strong reactions from those who strongly disliked his abovementioned views.”

​The European Court of Human Rights used a balancing test to balance the right to respect for private life and reputation against the right to freedom of expression. The ECtHR noted that relevant factors in applying this balancing test may include “the contribution to a debate of general interest; how well known is the person concerned and what is the subject of the report; his or her prior conduct; the method of obtaining the information and its veracity; the content, form and consequences of the publication; and the severity of the sanctions imposed.” In addition, the ECtHR made clear that in assessing the justification for an impugned statement, a distinction must be made between statements of fact and value judgments.

​The ECtHR agreed with the findings of the Icelandic courts that the scope of acceptable criticism in this case must be wider than in a case of an allegedly defamed individual who is not well known. However, the ECtHR noted that “even persons known to the public have legitimate expectations of protection of, and respect for, their private life.” The ECtHR also agreed with the Icelandic courts that since Einarsson was a well-known person and the impugned statement was part of a general debate concerning accusations of serious criminal acts, it was an issue of general interest.

​However, the ECtHR disagreed with Icelandic courts in their finding the publication as a value judgment. The Court considered the term “rapist” to be “objective and factual in nature” and a direct reference to a person who has committed rape, which is a crime under the Icelandic Penal Code. While not excluding the possibility that an objective statement of fact, such as the one impugned in this case, can be contextually classified as a value judgment, the Court stated that “the contextual elements justifying such a conclusion must be convincing in the light of the objective and factual nature of the term ‘rapist’ taken at face value.” The Court found that the Supreme Court of Iceland failed to adequately take into account the factual context in which the impugned statement was made and its allegation that Einarsson was a “rapist” after the discontinuation of the criminal proceedings against him. Even as a value statement, there needs to be sufficient basis to support the statement; the Court said there was no such basis in the case after the criminal charges were dismissed. Further, the Court stated:

In short, Article 8 of the Convention must be interpreted to mean that persons, even disputed public persons that have instigated a heated debate due to their behaviour and public comments, do not have to tolerate being publicly accused of violent criminal acts without such statements being supported by facts. The Court therefore finds that the statement was of a serious nature and capable of damaging the applicant’s reputation. It reached such a level of seriousness as to cause prejudice to the applicant’s enjoyment of the right to respect for private life for Article 8 to come into play.

​The European Court of Human Rights is too quick to tip the balance in favor of privacy over freedom of expression in this case. The ECtHR incorrectly applied its balancing test based on precedent set in a similar case, Tamiz v. United Kingdom, which held that the right to free expression under Article 10 outweighed the right to privacy under Article 8, in the context of vulgar comments made in an online forum. The ECtHR further incorrectly injected its own views on the matter of whether the impugned statement was one of fact or value judgment, rather than accepting the findings of the domestic Icelandic courts.

​The decision in Einarsson v. Iceland may be contrasted with the decision in Tamiz v. United Kingdom, which was decided by the European Court of Human Rights just one month prior and reinforced the importance of freedom of expression in the context of online forums. In that case, vulgar comments, including that a politician was a “violent racist,” were posted on a blog operated by Google Inc. The ECtHR held that the comments were too trivial in character and not distributed widely enough to pose a legitimate risk to the applicant’s reputation (Article 8) to warrant restricting the freedom of expression of Google Inc. and its users (Article 10). The Court noted that comments of this nature were common on the Internet and Tamiz, as a politician, was expected to tolerate them. In contrast, in the Einarsson decision, the reference to the crime of rape and the scale of the audience tipped the balance in favor of the right to privacy.

​The European Court of Human Rights acknowledges that domestic courts are the appropriate forums to determine whether a statement is properly classified as a fact or value judgment. Nevertheless, the Court substitutes its own view in this case. The ECtHR focused on the chronological link between the publication of the altered picture and the discontinuance of the criminal proceedings for the alleged rape, which was seen as removing any factual basis for Einarsson being called a “rapist.” Less weight was given to the intensity of the public debate caused by Einarsson’s interview or that Einarsson was a well-known figure who gained notoriety by relying on a pattern of discourse of provocative and controversial comments against women, which the Iceland courts had considered in detail. In this context, the Iceland courts viewed the term “rapist” to be “merely expressing disapproval in the form of invective,” i.e., a value judgment, rather than a statement of fact.

​The European Court of Human Right’s decision to tip the balance in favor of the right to privacy under Article 8 of the European Convention on Human Rights over the right to free expression under Article 10 in Einarsson v. Iceland is disappointing. By ignoring precedent that favors free expression on online forums and injecting its own views unnecessarily, the ECtHR incorrectly decided this case. Further, in the #MeToo era of widespread social media publication of accusations of rape and sexual harassment by public figures, this decision has concerning implications. At least in circumstances where criminal charges have been dismissed or allegations have not been proved in court, the European Court of Human Right’s decision in Einarsson v. Iceland, seems to shift the balance in favor of the privacy of those accused of violent criminal acts over potential victim’s freedom of expression via their private social media accounts.

Freedom of Expression on Social Media. (2021, Dec 08). Retrieved from https://studymoose.com/freedom-of-expression-on-social-media-essay 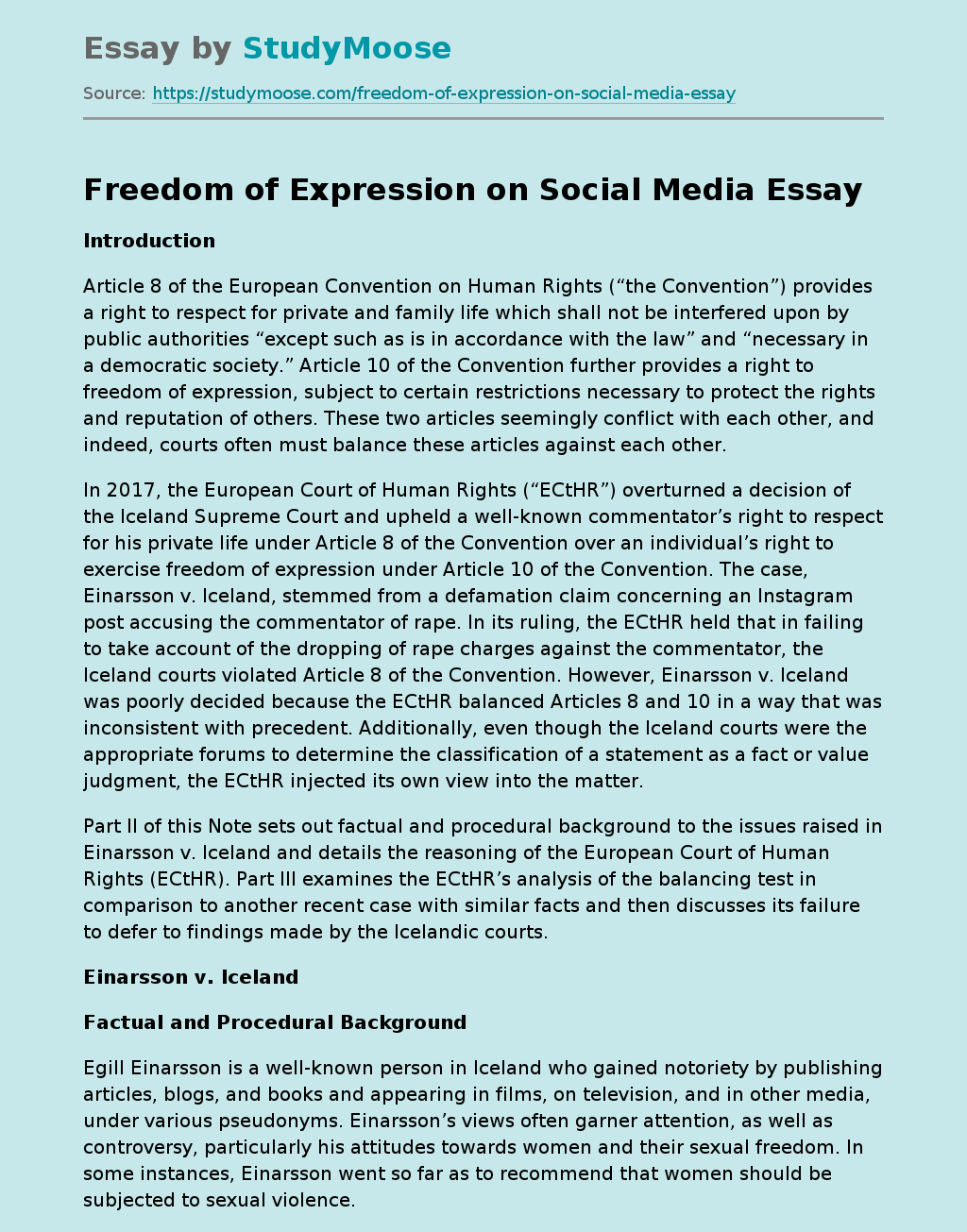