Frederick Valentich was twenty years old who was fascinated by the idea of Aliens and UFO’s and he researched websites and books to discover many sightings known around the area. Valentich needed flying time, but the trips he made before his disappearance, were a fail. He had another trip planned out to fly over Bass Strait to King’s Island. This flight would be a solo flight for him and was a 125 mile flight from his home town, Melbourne, Australia.

Don't use plagiarized sources. Get your custom essay on
“ Frederick Valentich’s Disappearance ”
Get custom paper
NEW! smart matching with writer

Not even half way through, Valentich spotted an object in the sky with him. Thinking it was an aircraft carrier, he radioed in to Melbourne communications, and asked if there were any other planes in the area, the answer was no. The object disappeared from sight and came back a few seconds later, but this time it was closer. The guy that Valentich was talking to over the radio asked Valentich to describe it.

He told communications that it was shiny and metallic with three lights and one green light that wrapped around the exterior of the object.

Valentich told operators that it seemed as if the unidentified object was playing games with him. The last words that was said from Valentich was, “It is not an aircraft,” then there was a loud scratching sound and the radio signal was lost. Researchers deyton 2 discovered many theories as of why Valentich mysteriously disappeared; however, the UFO, suicide, and engine failure theories are the most logical.

Dectectives on the Valentich disappearance could never reason out what the real reason for his disappearance was, but a UFO was determined to be the most reasonable theory.

A UFO does not mean an alien, but it simply means an unidentified flying object. The UFO used to kidnap Valentich and his plane could be someone who wanted him dead. The aircraft carrier the stranger was flying could have been one that Valentich has never seen before and since Valentich said, “ the speed of the object was flying to fast to where he could not identify it,” he might have mistaken it for something else. Therefore, the UFO is in fact an unidentified object that someone managed to hide from Melbourne Communications.

The descriptions that Valentich told the operators could be real because the night of his disappearance many eye witnesses saw Valentich fly over their town with an object right above him with a green light. They also said, “the object would disappear and come back closer to Valentich aircraft carrier and then both of them were gone. ” (Rosales, “UFOS, ET. AL”) The UFO theory is reasonable to the disappearance of Frederick Valentich. This theory is plausible because there were eye witnesses of Valentich flying over Bass Strait with an object over him.

Since UFO doesn’t always mean an alien, this theory is logical. Someone could have wanted Valentich dead and thought this was a good time to do it; however, the kidnappers had to find a way around Melbourne communications are traffic radar. After the news of his disappearance was released, twenty other people told police that they remember Deyton 3 seeing an object with a green light above Valentich’s plane the night he flew over Bass Strait. So, the UFO theory is a more logical theory as to why and how Frederick Valentich disappeared. The second most logical theory is suicide.

People believe that Valentich wanted to kill himself, but wanted to go out with a bang. Therefore, he decided he would pretend that he saw a UFO and call Melbourne Communications and make up this whole story. He described the object to make it seem like it was a UFO and he made his last words really make this story believable. According to the article, “Who or What Killed Frederick Valentich,” Valentich held the communications button for 17 seconds before all communications were lost, letting the people at Melbourne hear the scraping sound.

Suicide could be logical, but there is no evidence to prove this theory since neither him nor his plane was ever found. This theory is not plausible because Valentich’s body was never found. Search and Rescue were sent out immediately, but no evidence of Valentich or his plane was found. The Department of Transport Findings concluded with saying, “the reasons for the disappearance of Valentich are unknown and we have presumed fatal for him. ” (Article “Who or what killed Valentich? ” paragraph 6). Thus, the theory of suicide is not logical.

The final in logical theory for Valentich’s disappearance is engine failure. Due to the possibility of a UFO, the force used by the unidentified object, could have created engine failure. Researchers who wrote the article, UFO’s, said that before the radio signal was lost between Valentich’s plane and communications, Valentich mentioned that his engine was coughing. Even though, this might be true, detectives say there is no possible way to determine this theory is true because the plane was never found. Also, some say that the UFO could have created a deyton 4 isturbance of Valentich’s engine, but it would not completely shut it off.

Shelly Barclay wrote in her article, “Historic Mysteries,” that the disturbance that could have been created could have been intentional. “This theory is only supported by the report given by Valentich of his engine coughing,” Barclay said. Due to the lack of evidence and the plane never being found, this is the least likely theory of Valentich’s Disapparence. This theory could not be plausible because where he lost communications; the plane should have crashed there or somewhere near there.

Like the theory of suicide, there is no proof as to how he disappeared. An engine failure is the theory that was least supported with only the words, “my engine is coughing,” made by Valentich the night he disappeared. More and more theories have been issued, but researchers and writers of Valentich’s disappearance say the fact that we may never know the true reason for this strange disappearance. 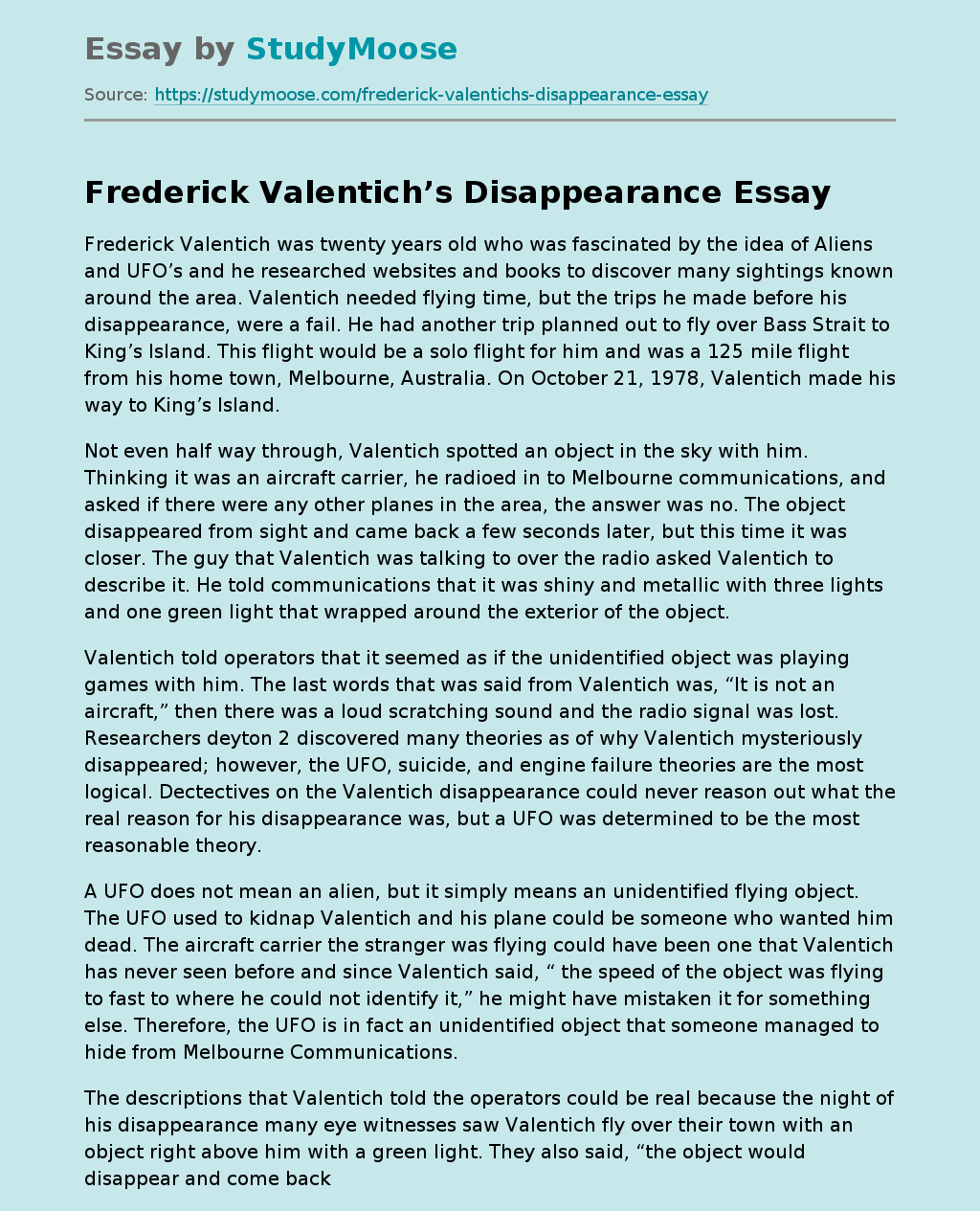