The story is told by an omniscient narrator who unfolds his yarn with consummate skill and a portentousness that vacillates between grim, almost biblical, wisdom and brutal irony.

The narrative opens with the assertion that the vanishing of the child “was an event so cataclysmic that it forever divided time into the then and the now” and proceeds to detail the events that immediately preceded the child’s disappearance and the actions of the doctor, his wife, the authorities, and the paperhanger after the child vanishes.

Don't use plagiarized sources. Get your custom essay on
“ “The Paperhanger” is a dark tale of the disappearance of a child ”
Get custom paper
NEW! smart matching with writer

(72). In the first pages, the doctor’s wife quarrels with the paperhanger on the building site of a mansion being built for her and her husband.

The child, Zeineb, is innocently playing with the paperhanger’s long flaxen hair as the mother assails him for his shoddy work and for overcharging her. The paperhanger’s insolent and sexually provocative response enrages the doctor’s wife, and she verbally abuses him, whirls on her heels, and marches out of the house to her silver Mercedes.

When she calls for her daughter to join her, there is no response. She goes back into the house and demands to know where her daughter is. No one knows; but led by the paperhanger, the workers search the house and all of the woods behind the house.

In William Gay’s story, the people slowly start to fade away. Gay first starts with the daughter of the doctor and the doctor’s wife, Zeineb, as she vanishes in broad daylight.

Deeper into the story the doctor starts to disintegrate. The doctor’s practice fell into ruin, and he packed things of importance and others at random into the Lexus and left in the middle of the night. The wife never hears from him again. He’s gone.

Next the mother and the paperhanger start to let go of themselves. The mother says, “I drink to forget but it is not enough.” (86). The mother also lets herself go after the paperhanger tells her how he killed his wife then dug up a grave and placed the body underneath the coffin and placed everything back, but she still scooped down to his level and had sex with him, “How far you’ve come, the paperhanger said in wonder. I believe you’re about down to my level now, don’t you?” (90).

Also, the paperhanger lets himself go by not shaving and drinking. He has changed a lot. His hair seemed to be “cut in the dark or by a blind barber and his cheeks were covered with a soft and curly beard.” (84).

William Gay uses the element of religious imagery to catch the reader’s attention. When the paperhanger is describing how he had killed the little girl he states, “His hand snaked out like a serpent and closed on her throat and snapped her neck before he could call it back.” (91). When one thinks of a serpent one might thing of the devil or Satan from the bible. When Adam and Eve were in the garden they were approached by Satan who was disguised as a snake. As we all know snakes are known for being very notorious.

Another religious imagery seen in this short story is miracles. The wife says to the paperhanger, “I have prayed for a miracle but I am not worthy of one. I have prayed for her to come from the dead, then just to find her body. That would be a miracle to me.” (86). As Jesus performed miracles like raising the dead back to life so she prays for that, too. At this point in the story all she wants is to know what happened to her child. She longs for closure. Just to find a body would be enough for her.

The paperhanger goes and gets the girl out of the freezer and places her in the arms of the sleeping mother, as if he can produce a miracle for the mother of having the child’s body. “Discussing the vagaries of life and pondering deep into the night not just the possibility but the inevitability of miracles.” (92).

“The Paperhanger” is a dark tale of the disappearance of a child. (2016, May 11). Retrieved from https://studymoose.com/the-paperhanger-is-a-dark-tale-of-the-disappearance-of-a-child-essay 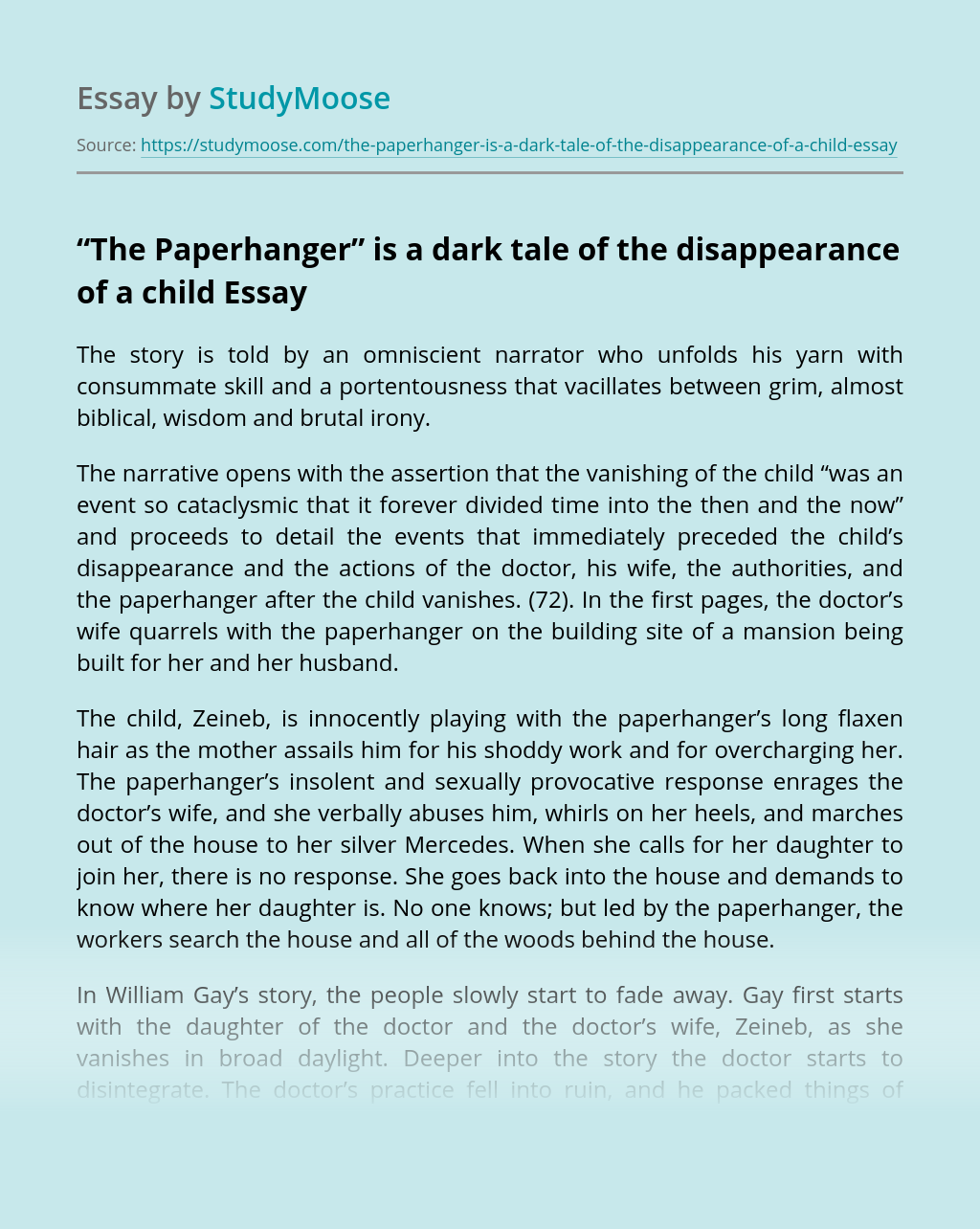