With what I have learned from the My Virtual Child program, I now understand the complexities of raising and guiding a child. Mere decisions made during infancy can affect a child long term, physically, cognitively, and even emotionally. To make important developmental decisions cannot simply be classified as a challenge, it is one of the hardest things parents experience. Making decisions for one’s self, as opposed to making decisions for one’s child is so challenging that most people will not understand until they have children.

Even with the realistic impression this program has, I would venture to say that even the majority of my classmates and I do not understand parenting difficulties to the fullest extent. In terms of physical and motor development, Noah was above average at a young age and this continued on through his early childhood. My virtual partner and I never had trouble getting Noah to eat and once a bedtime routine was established only on occasion would he have trouble sleeping through the night.

In my opinion, I would classify Noah as an easy baby. He adapted to most situations rather quickly and the majority of the time was very happy, but easy to calm if a tense situation occurred.

As for his emotional well-being, it was reported in a parenting questionnaire when Noah was four that I scored in the average range in affection and warmth. Noah had a great family relationship with his father, sister, and myself and demonstrated a secure attachment from an early age.

Noah was a very social boy; he had a close group of friends that stayed about the same from the time he was in grade school until he graduated. Noah excelled in school from the very beginning, and continued to surpass his academic challenges until he graduated high school. He was accepted into Honors and AP level classes as a sophomore and scored above average in most all of his classes. Noah was pretty well rounded, and for the most part did average – if not excellent – in most activities he partook in. He was active in sports at a young age but I knew that wasn’t his passion from the beginning. He was a very musical person and showed his interest and love for it in middle school. At age 12 he was playing the saxophone in the middle school band, joined the high school jazz band, he sang, and taught himself to play the guitar. From the beginning I thought I would take on an authoritative parenting style, but I believe at the end I realized I was hovering somewhere in between authoritative and authoritarian.

At first I didn’t want to admit it to myself but looking back I have no regrets because it seemed to work out for both Noah and our family. Growing up I always thought my parents were a little tough on me, perhaps a bit old school but my parenting decisions seemed to mirror theirs. Also, my sister now has two daughters and I have watched my sister and her husband raise them. My sister reads a lot of parenting books and blogs and has shared a lot with me. While raising Noah, I took some of what I had read into account and made some decisions based on the research. On occasion, my boyfriend would participate with me and help me make decisions on how to raise Noah. With all of these resources I believe that the majority of decisions made were for the best, and Noah was raised to the best of my abilities. At age six, Noah told me that he thought I was as “nice” to him as other parents and that I had “as many rules” as they did too. I was surprised that at such a young age he was aware of what other parents were doing but I believe by the time he got a little older, I got a little stricter.

He was expected to do household chores and keep up with homework, but he was able to negotiate times and an allowance for all of this to get done. However, I did not use money as an incentive for good grades – that was expected from both my partner and me. Reflecting on how this may have affected his development I think that this was good for Noah because it challenged him to prioritize his time, for both things that he needed to do and things that he wanted to do (i.e. hang out with friends, participate in extracurricular activities, etc.). At one point, Noah was frustrated with me because he thought I did not allow him to do things his friends’ parents let them do. At the time I was a little confused because Noah was able to negotiate most anything he wanted but there was always a price – chores or family time. Neither of which I thought were unreasonable of my partner or me to ask. Either way, I do not regret my choices because Noah turned out to be very happy, he had a great family values, and when he applied for colleges he was accepted to several and received a scholarship from a prestigious institution. With guidance from my partner and me, Noah made the right decisions for him that I believe worked out for the best. Looking back, I do not believe that I would have made any major changes to how I decided to raise Noah. I may have tried to encourage him to be a little more active, but only to ensure his health.

Whether it was sports or simply working out I would rather he live a healthy, active life, than a sedentary life. However, with all of the activities that Noah participated in I am not sure he would have been able to dedicate enough time to keep it consistent. Outside of that, I may have given Noah a little bit more freedom because at one point he decided to demonstrate his independence by getting a tattoo with his girlfriend. This was very disappointing to me, simply because I don’t think it was a decision he should have made at sixteen with his high school girlfriend. As I previously mentioned, I believe that Noah had a secure attachment with both my partner and me. An examiner noted at Noah’s 19-month developmental testing that it was clear we were a secure base for him and we were encouraged to continue with the same parenting practices (Berk, 2014, pp. 187). As a toddler he often ventured off to explore, but would always check back to make sure we were still there for him. Also, when Noah was an infant and I attempted to go back to work, he would act very distressed when I left.

When I returned home Noah seemed more than happy to see me and for the majority of the following evening he demanded almost constant attention (Berk, 2014, pp. 197). It was clear that Noah preferred my partner or me to a stranger and instead of taking him to daycare we had to ask a family member to watch Noah while we were at work. At age four we noticed that Noah was somewhat rigid with gender roles. He had gender schemas established for both men and women and did not stray from his beliefs very often. Once while Noah was in the car with me, I was pulled over by a female police officer and Noah did not believe that she was a real officer because she was a woman. At the time, Noah could have been classified as a gender-schematic child because he identified the behaviors of men and women as either masculine or feminine (Berk, 2014, pp. 277). This was something that my partner and I had trouble with until Noah was about six. We attempted to model non-stereotypical behaviors for men and women to break Noah’s initial ideas about gender roles and to open his mind to the variety of roles both men and women can take on.

For example, he often tried to help his father or mimic what he was doing, so his father began cooking in the kitchen and asking for Noah’s help. From that point on he seemed to better understand the range of tasks both men and women can do. Early on it was evident that Noah was a musically gifted child. At age six he started taking piano lessons and singing aloud to the songs he would play. This continued to be a passion of his throughout his adolescent years. He participated in the middle school band, playing the saxophone, and because of how talented he was the high school jazz band recruited Noah to be a member of their group. Even more impressive to my partner and me at the time, Noah began to play the guitar and that was primarily self-taught. According to Howard Gardner, Noah would have been categorized as a musically intelligent individual (Berk, 2014, pp. 312). I believe that my partner and I instilled Noah with the ability to recognize the difference in actions that were right versus actions that were wrong. He had a strong set of morals and values that were shaped, yet not entirely created by us.

While at a competition with his vocal group from school a few of the members stole trinkets from a store and were caught. Noah agreed with their punishment and was aware of how wrong their decisions were. However, he based his recognition of these immoral actions on how the children let down their parents, coach and teammates while taking part in the unlawful activities. This could be classified as conventional level moral understanding (Berk, 2014, pp. 408). To Noah, these were wrong choices because they were wrong in the eyes of society. I urged Noah to hypothetically think about how the situation may have been different than what he thought; I suggested that maybe his teammates stole medicine for a sick teammate. With that I attempted to encourage Noah to use more post-conventional judgment, where he could define morality with abstract ideas as opposed to those ideas set for him by society (Berk, 2014, pp. 408). Although parenting was a challenge, I don’t believe I would have done it any differently than what I did. There were ups and downs; however that is expected in any type of relationship.

Once finished with the program I was a little disappointed I didn’t get more feedback on how Noah finished out in life. However, I was very happy with Noah’s development and was glad to know that, the majority of the time, the best decision was made. With the skill set that he had acquired I believe that Noah was prepared to lead a successful and happy life. A very intelligent and capable young adult, he was prepared for nearly anything his life intended him to encounter. Having said that, I have no regrets with the decisions I made for my virtual son and could not be happier with the person he turned out to be.

My Virtual Child Final Paper. (2016, May 22). Retrieved from http://studymoose.com/my-virtual-child-final-paper-essay 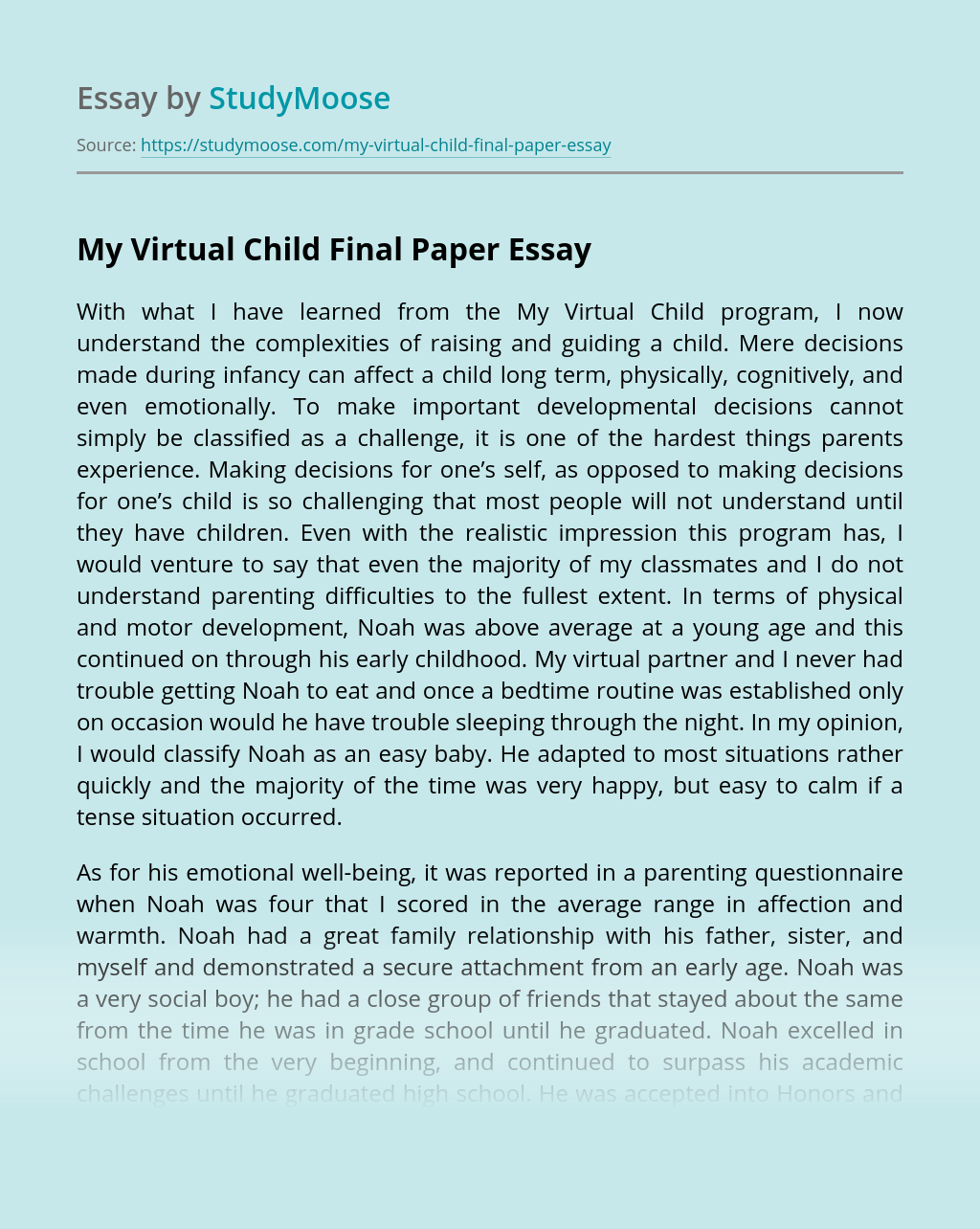