Every Child Is Special by Aamir Khan

Every one of us has our own way of expressing what we want to do, we have given the ability to portrait it and show to the world that we excel in our own way of living, and not needing the expectation of others. Even those people who are not directly attach in the environment of others. I’m referring to those person who been special in the eyes of those who truly see their true value and existence in the community.

Don't use plagiarized sources. Get your custom essay on
“ Every Child Is Special by Aamir Khan ”
Get custom paper
NEW! smart matching with writer

They have wide imaginative skills that tour their self on those out of the world idea. Others do not really see their worth on why they are doing those things that make their selves happy and contented, they discriminate those special person that cannot fulfill the necessary task.

Every Child Is Special is a Hindi drama film (Taare Zameen Par, translation: Stars On Earth) produced and directed by Aamir Khan (who also played the role of Ram Shankar Nikumbh an art teacher).

It tells about a boy, Ishaan Awasthi an eight-year old whose world is filled with wonders that no one else seems to appreciate and who were always getting in trouble at school for being so misbehaving and out of focus from his lessons. Too often, he would be caught by his teacher daydreaming and getting low grades.

Here is a more comprehensive summary, beware of spoilers below. Every Child is Special is a Hindi films directed by Amir Khan .The story is about an 8-year-old boy named Ishaan who cannot cope with the academic demands in school.

He once complained that The letters are dancing!” when he was asked to read. Teacher threw him out of the class and the students who passed by the hall mocked him for being punished. Moreover, Ishaanreversed letters when he wrote and demonstrated a poor understanding of mathematical concepts. Sometimes if he commits mistakes everybody laughs at him or will shout on him just like what his father or even his mother did. He always find ways to laugh after evrybody laugh bout what his diong. He was at the risk of repeating a grade level again because of his poor scholastic performance.Too often, he may be caught by his teacher daydreaming and getting low grades. Ishaan began to evade homework and cutting classes because of his discouragement over his failings.

Sometimes his father shouts and doing harsh against Ishaan. When his teachers advised his parents to avail of special education services, his family decided to send him to a boarding school instead in the hopes that the highly structured environment will straighten out his “behavioral problems”. But the academic status of Ishaan was not improve. Alternatively, he became withdrawn and lonely, far from the Ishaan who was active and fun-loving. Ishaan continued struggling with the same problems in his new school. When he was finally on the brink of suicide,Then came an alternative art teacher Ram Nikumbh discovered that he had dyslexia and consequently turned his life around. Ram Nikumbh change the best way Ishaan would act towards school and figure out how to appreciate himself even more, his art teacher who pay attention to Ishaan and to understand Ishaan whom his parents never finds what ishaan is. Towards the end of the school year Nikumbh organises an art fair for the staff and students.

The competition is judged by artist Lalita Laimi, who portrays herself in the film. Ishaan, with his strikingly creative style, is declared the winner and Nikumbh, who paints Ishaan’s portrait, the runner-up. When Ishaan’s parents meet his teachers on the last day of school they are left speechless by the transformation they see in him. Overcome with emotion, Ishaan’s father thanks Nikumbh. As Ishaan is getting into the car to leave with his parents, he turns around and runs toward Nikumbh. The film ends with a freeze frame shot of Nikumbh tossing Ishaan into the air. by: desiree dela cerna

The first 30-45 minutes (it is a two and a half hour movie) kind of bored me but that’s more because there wasn’t much in it except showing that Ishaan had great trouble coping up with his studies. The story got interesting after he was sent to the boarding school and later on Ram appeared in the picture. From then on you’d better prepare your box of tissue besides you. No kidding. I’m not quite certain if its because of Aamir’s teary eyes or the story itself. Whatever it was, the story starts taking shape from there. You get to see a clear picture of what the real plot is and the true story of the kid’s inner struggle. The teacher-student relationship here is just so heart warming. In fact, it’s more touching than Ishaan’s relationship with his parents.

He even cannot read nor write, for him letters and numbers are his enemy. For the people around him, Ishaan is a naughty and lazy boy because of this, his father sent him to boarding school, all alone and homesick with the hope of disciplining him, but the academic status of Ishaan did not still improve. Instead, he became withdrawn and lonely, far from the Ishaan who was active and fun-loving. Then came a new art teacher Ram Shankar Nikumbh who infects the students with joy and optimism.

He breaks all the rules of “how things are done” by asking them to think, dream and imagine, and all the children respond with enthusiasm, all except Ishaan. But with Ram Shankar Nikumbh’s time, patience, care, and some awesome motivation he ultimately helps Ishaan find himself and change the way Ishaan would act towards school and learn to appreciate himself even more. Darsheel Safary is so perfect for the role of Ishaan Awasthi.

Safary, with his innocent eyes and face, made me laugh with his funny antics and at the same time rend my heart as he goes through the agony of enduring boarding school alone and away from his parents. From start to finish, the movie gripped my attention, and the musical portions added to my fascination for that I can say that Every Child Is Special is a one heart-touching movie. This movie is an eye opener as to the worth and significance of every child.

The story deals with an issue that is as real as it is unrecognized – dyslexia. The movie has increased my education about that kind of ailment. This is a kind of movie that can tug the heartstrings and at the same time bring hope that having dyslexia is not a desperate situation. Family support, patience, and love are central themes in this story, plus the primary focus on painting and art. The theory on multiple intelligences in education plays a major role in this movie and can be very informative to teachers and parents.

Adults should not demand that their kids top all their subjects so that they can live out the unfulfilled ambitions of their parents. Each child is special in the sense that they have their own calling, which may or may not be in line with what their families want. Moreover, as an OT, I highly regard this movie for advocating the “disability perspective”: that there are a lot of special children who have given up trying to meet age-appropriate demands because of disabilities. Every Child Is Special is a movie that can tug the heartstrings and at the same time bring hope that having dyslexia is not really a desperate situation. Friends and family support, patience, and love are central themes in this story.

Every Child Is Special by Aamir Khan. (2016, Sep 12). Retrieved from https://studymoose.com/every-child-is-special-by-aamir-khan-essay 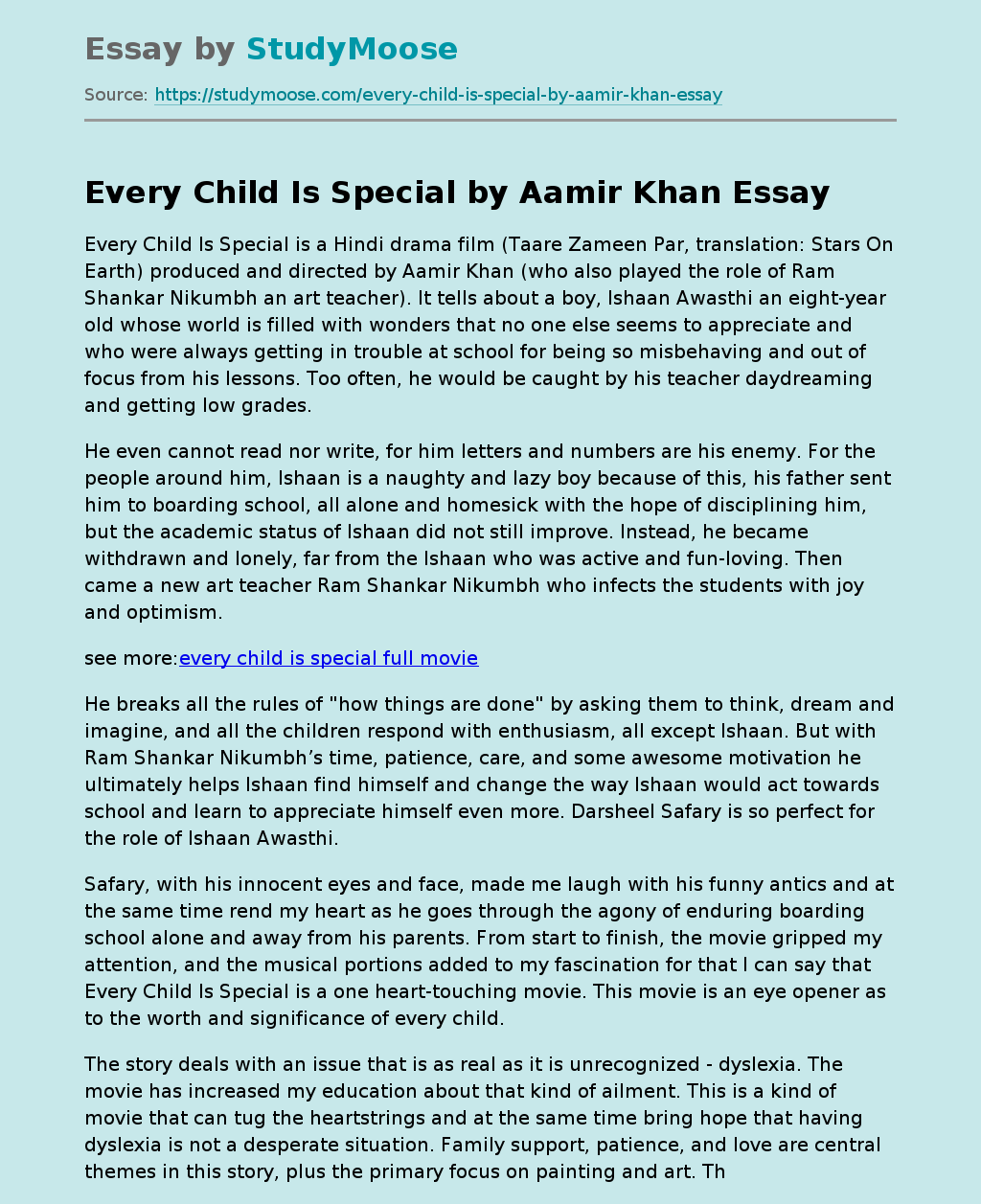