Reflection Paper About the Movie "Every Child Is Special"

REFLECTION PAPER FOR THE MOVIE
“EVERY CHILD IS SPECIAL”

Ishaan Awasthi an eight-year old whose world is filled with wonders that no one else seems to appreciate and who were always getting in trouble at school for being so misbehaving and out of focus from his lessons. Too often, he would be caught by his teacher daydreaming and getting low grades. He even cannot read nor write, for him letters and numbers are his enemy.

Don't use plagiarized sources.
Get Your Custom Essay on Reflection Paper About the Movie “Every Child Is Special” Just from $13,9/Page

For the people around him, Ishaan is a naughty and lazy boy because of this, his father sent him to boarding school, all alone and homesick with the hope of disciplining him, but the academic status of Ishaan did not still improve. Instead, he became withdrawn and lonely, far from the Ishaan who was active and fun-loving. Then came a new art teacher Ram Shankar Nikumbh who infects the students with joy and optimism. He breaks all the rules of “how things are done” by asking them to think, dream and imagine, and all the children respond with enthusiasm, all except Ishaan.

But with Ram Shankar Nikumbh’s time, patience, care, and some awesome motivation he ultimately helps Ishaan find himself and change the way Ishaan would act towards school and learn to appreciate himself even more. Ishaan Awasthi is not an ordinary student. He has a very wild and creative imagination that brings him to different worlds, to worlds unknown to his classmates, teachers and family. He usually plays and does things on his own, he has his own special perception on things. Though his talent in painting and creativity is exceptional, he is just like every other kid, he loves to play and goof around. But the problem was, he cannot not cope with school the way other kids does. He has repeated the third grade, and still he did not show any improvement. He fails to read and write properly that’s why he was unable to pass his subjects. At the same time, he cannot attend to himself; buttoning his shirt or tying his shoe lace. A kid at the age of 9 is capable of all those things, unfortunately for Ishaan he is not, because he suffered from dyslexia. The teacher-student relationship here is just so heartwarming. In fact, it’s more touching than Ishaan’s relationship with his parents. On his first day of school, Ishaan’s teachers were upset by his poor performance in class.

His Art;s teacher even whacked his knuckles five times. Ishaan was overwhelming and traumatized at the same time because of how strict the teacher. He became depressed and sad. There is also a scene where Ishaan runs away from school and loiters on the road for the whole day – for the fear of being punished for not having done his homework. I never did anything like that in school. The comparison might not be warranted but this is just one of those scenes which made me relate to Ishaan’s plight in the movie. The incidents involving the teacher-student interactions depicted in this movie are so relevant in today’s times when you get to see and hear on television at regular intervals innovative punishments like whipping and punching done to students. He once complained that “The letters are dancing!” when he was asked to read. Teacher threw him out of the class and the student who passes by the hall mocked him for being punished. Moreover, Ishaan reversed letters when he wrote and demonstrated a poor understanding of mathematical concepts. Sometimes if he commits mistakes everybody laughs at him or will shout on him. A scenario that was related to me during my elementary year that was related to Ishaan, is being bullied and put to shame by my teacher.

Everyone is challenged by obstacles in his or her life – serious problems to deal with. Some people are defeated by the obstacles in their lives, while others find way to overcome them. I believe that everyone has problems or challenges to overcome. Even people who think that they are perfect have problems or challenges to overcome. Life is beautiful but not always easy, it has problems, too, and the challenge lies in facing them with courage, letting the beauty of life act like a balm, which makes the pain bearable, during trying times, by providing hope. As a student, who burns mid night oil, makes sacrifice and resists temptations so that I can perform well. Similarly, a successful executive has to face the ups and downs of life, not forgetting the life is a mix of success and failure, joy and sorrow. I overcome my problem by means of self-steam and through the help of other people I meet in this world. Ishaan overcome his problem through the help of Ram Shankar Nikumbh.

Difficulties test the courage, patience, perseverance and true character of a human being. Adversity and hardships make a person strong and ready to face the challenge of life with equanimity. There is no doubt that there can be no gain without pain. It is only when one toils and sweats it out that success is nourished and sustained. Thus, life is and should not be just a bed of roses; thorns are also a part of it and should be accepted by us just as we accept the beautiful side of life. And those, who think that good times last forever, succumb to pressure during difficulties. They do not put in required hard work and efforts because they break down easily.

Reflection Paper About the Movie “Every Child Is Special”. (2016, Mar 21). Retrieved from https://studymoose.com/reflection-paper-about-the-movie-every-child-is-special-essay 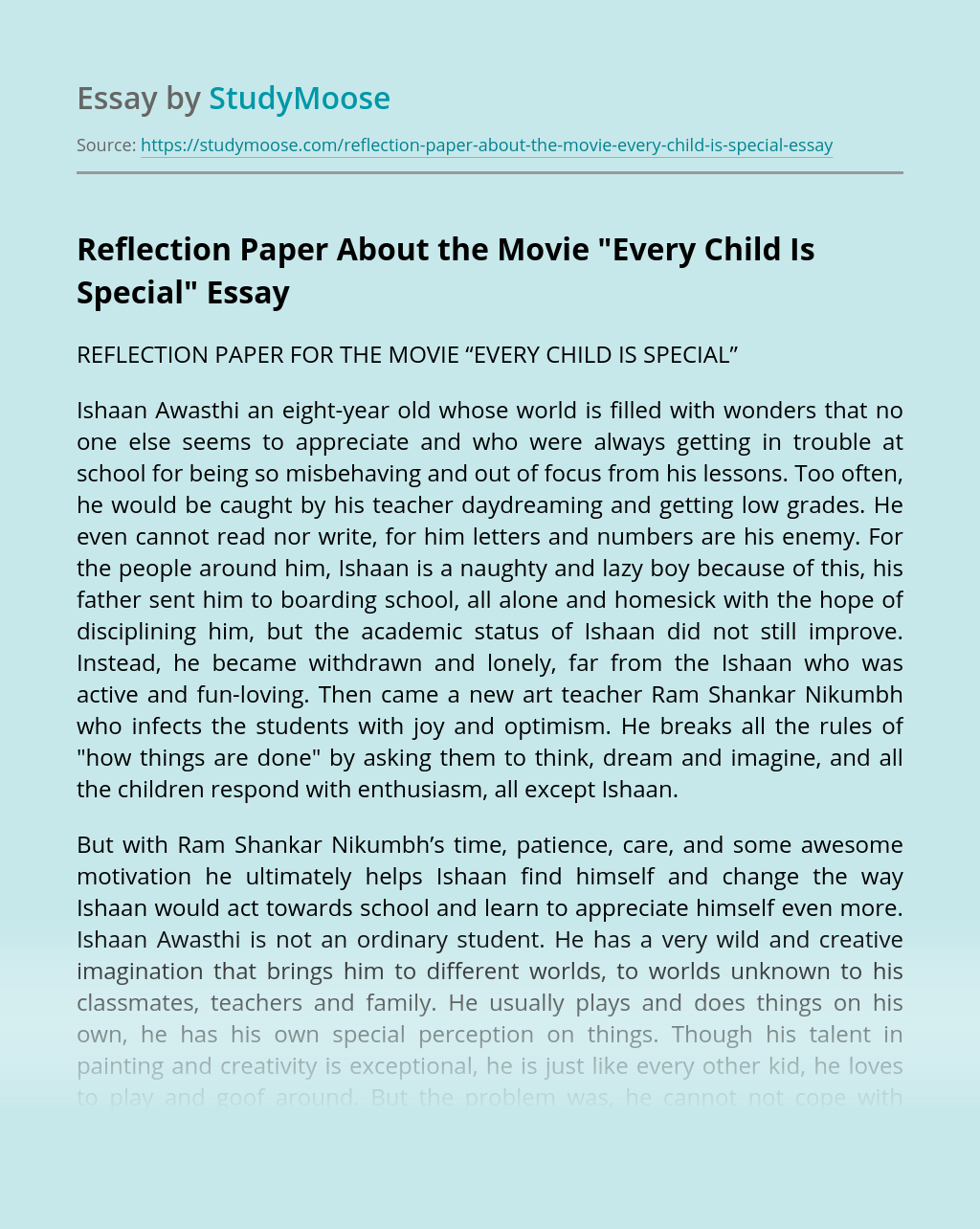 Rate this post CHAPTER 1 INTRODUCTION 1.1 Background of the Study The Optional Protocol on the Sale of Children, Child Prostitution and Child Pornography to the Convention on the Rights of the Child defines child prostitution as a commercial sexual exploitation of children whereby a child sells his or her body for sexual activities in...

Get Essay
Analysis of Child Development in Broken family

Rate this post THESIS From the suggestion of one researcher that broken homes equal broken people, and that broken people break others. Although this particular article focuses on the idea that boys without authoritative role models are well placed to get caught in the Sturm und Drang of adolescence, it seems the issues these children...

Rate this post Middle childhood development is a big time in a child life. They begin to become more independent and rely more on themselves without the help of their parents. This is also a great time to still create solid bonds with your child before they enter the adolescence stage which begins at 13...

Rate this post The topic of this research proposal is addressing childhood obesity in the United States. This epidemic has been going on for many years now and has become an issue most recently being addressed by the United States government through their task force, which hopes to end this problem. By reviewing the many...