In this paper I will be discussing the case of Bailey v. United states. First we will be looking to see all the facts of this case to get a clear view of the issue at hand. Then we’ll cover what the issue is for this case, and why it would be an issue in accordance to the Fourth Amendment.

I will make a stance in this paper about if I think the issue at hand is or isn’t a violation of the Fourth Amendment. The decisions of all the courts will be looked at, and their reasonings.

These sort of cases are important to the ever living and breathing document that is the Constitution because cases like hese help change, form, and update (so to speak) the rights that we are afforded according to the United States. On July 28th, 2005 the police of Suffolk County received information via a confidential informant that he had purchased drugs. The drug deal was for the amount of six grams of crack cocaine.

During the drug deal the informant described that he had seen a firearm in the apartment.

The apartment was separate space ofa house located in the basement of 103 Lake Drive in Wyandanch, New York. The information gave further details as such. The exact description of the person he had urchased the guns from; ” heavy set black male with short named known as Polo. ” Oustice. org, page 2) The informant also gave the exact details of the type and description of the gun that he had seen in the apartment which was a handgun.

On the same day the police went to the Judge on call to obtain a warrant.

After proving the credibility of the informant they were able to obtain a “no-knock” warrant. A “no-knock” warrant is given when there is an idea that the police going to execute a warrant might be harmed or if there is a chance that the evidence expected to be ollected could be destroyed. The search warrant specified the basement apartment as the location to be searched, and items to be retrieved were the handgun and any ammunition to go along with it.

A single Detective was given the task of watching the apartment while the warrant was being obtained to ensure that the officers that were going to execute the warrant would know if any one was in the apartment, and if so how many. The affiant then went to the scene while the search unit got ready to execute the warrant. While they were watching the house the two of them itnessed two individuals that could meet the description of the the informants description of Polo exit from the basement apartment and get into a car.

The two officers followed the car fora few blocks before pulling over the vehicle. After the car was stopped the officers asked the two occupants to step out of the vehicle and proceeded to pat them down. After the two identified themselves, the officers confirmed the driver was the Polo, and the occupant was a friend he was driving home. During the stop the officer searched the pockets and found a set of keys in Polo’s front pocket. Polo explained the keys were to his apartment.

The keys that were found in the front pocket were also seized incident to his arrest along with ” two addition guns outside the one in plain view, many rounds of ammunition, a bullet proof vest, 40 grams of crack cocaine,39 grams of powder cocaine, drug paraphernalia, and several documents with the petitioners name on them. Several boxes of personal items that indicated someone had recently moved into the apartment. ” The police officers also had tried the keys they had seized from Polo and found that one of the keys opened the door to the apartment.

It was in April 2006 that Bailey, “Polo”, was indicted on the multiple counts for having both drugs and firearms in his apartment. The questioned issue here can be clarified by this statement presented in the government brief. ” Whether the Fourth Amendment permitted police officers, incident to the execution of a valid search warrant for a deadly weapon at a private residence, to detain an occupant who left the immediate vicinity of the premises, when the detention was conducted as soon as reasonably practicable. ” (americanbar. org).

The issue seems to be the fact they the pair were ot in the direct vicinity of the place to be searched when they were initially stopped and detained, nor was the warrant being executed when they were pulled over. The key and the statements were the only things that could absolutely tie the petitioner to the apartment and the drugs and firearms found within it. Bailey moved to suppress the evidence of the key that was seized, and his conversation with the two officers during his stop under the argument that they had illegally detained him.

The court said this was a legal stop using the case of Michigan v. Summers (452 U. S. 692 1981)) as an explanation as to why the police had a right to detain Bailey. There are three points to the Summers case that explain why an officer may detain someone during execution of a search warrant; those being ” officer safety, aiding the completion of the search, and preventing flight if incriminating evidence is found” (ohioattorneygeneral. gov).

The first issue of officer safety is considering the fact that people within the residence may being riled and rise up and try to “harm the officers in effort to conceal or destroy evidence” (law. cornell. edu). Secondly the dea of aiding officers to complete the search claims those that would be detained, if they were not “occupants [might] wander around the premises, [and] there is the potential for interference with the execution of the search warrant. They can hide or destroy evidence, seek to distract the officers, or simply get in the way. ” (law. ornell. edu) Lastly on this seemingly three pronged test when it comes to the Summers case, is the prevention of flight if evidence is found. It is because of the prosecution using this case’s three pronged test to determine the validity of etaining someone during a search that I take a stand on the side of the defense and say that the detention of Bailey is something that unlawful and violated his fourth particular car is was not. There are many reasons why, but I can simply look at the three prong test and clearly shred two of their prongs to pieces.

There was no real reason for them to pull Bailey over after he left his home and because they did the key they found on his person during the pat down and the confessions he made to the officers are something that should have been left out of the trial. When it comes o the first prong of the Summers test in comparison of the Bailey case it is ridiculous to even believe that from nearly a mile down the road that Bailey would have been able to affect the safety of the officers.

It was argued that if they had stopped Bailey just outside the apartment people within the apartment could have been notified of the police and they could have been ready to harm the officers, since it was suspected that weapons were in the home. This is true, however if this were the case why did they not simply stop him as soon as he got around the corner? The second art of the three is the fact that there could be an instance where those in the home being searched could go around and destroy evidence or even hide it.

I agree that the police can do their Job far more effectively, and search more thoroughly, if they don’t have to keep an eye on those inside a home. However how can this even apply to Bailey? Bailey and the other person that had been in his house were no longer in it. There was no threat that Bailey nor his companion would have been able to hinder the execution of the search warrant. So to me this prong absolutely does not pply in this case. The final result of the Summers prong is that the person in question could become a flight issue if there were evidence found during the search.

This is true, Bailey could have fled and become a flight risk if someone were to tip him off that there were cops searching his apartment. However, this is true of any search warrant ever. This is too broad ofa point when it comes to the detention of people. Does this mean that ten miles across town if a search warrant is being executed that they have a right to find you wherever you are until they are finish with heir search? ” If not circumscribed, the rationale of preventing flight would Justify, for instance, detaining a suspect who is 10 miles away, ready to board a plane.

The interest in preventing escape from police cannot extend this far without undermining the usual rules for arrest based on probable cause or a brief stop for questioning under standards derived from Terry. ” (law. cornell. edu) So in closing I absolutely agree that the detention of Bailey in this case was unlawful and one hundred percent violated his fourth amendment rights. When this ase first went to court this petition to withhold the keys and confession was denied by the District court, and The Second Circuit agreed on this finding. 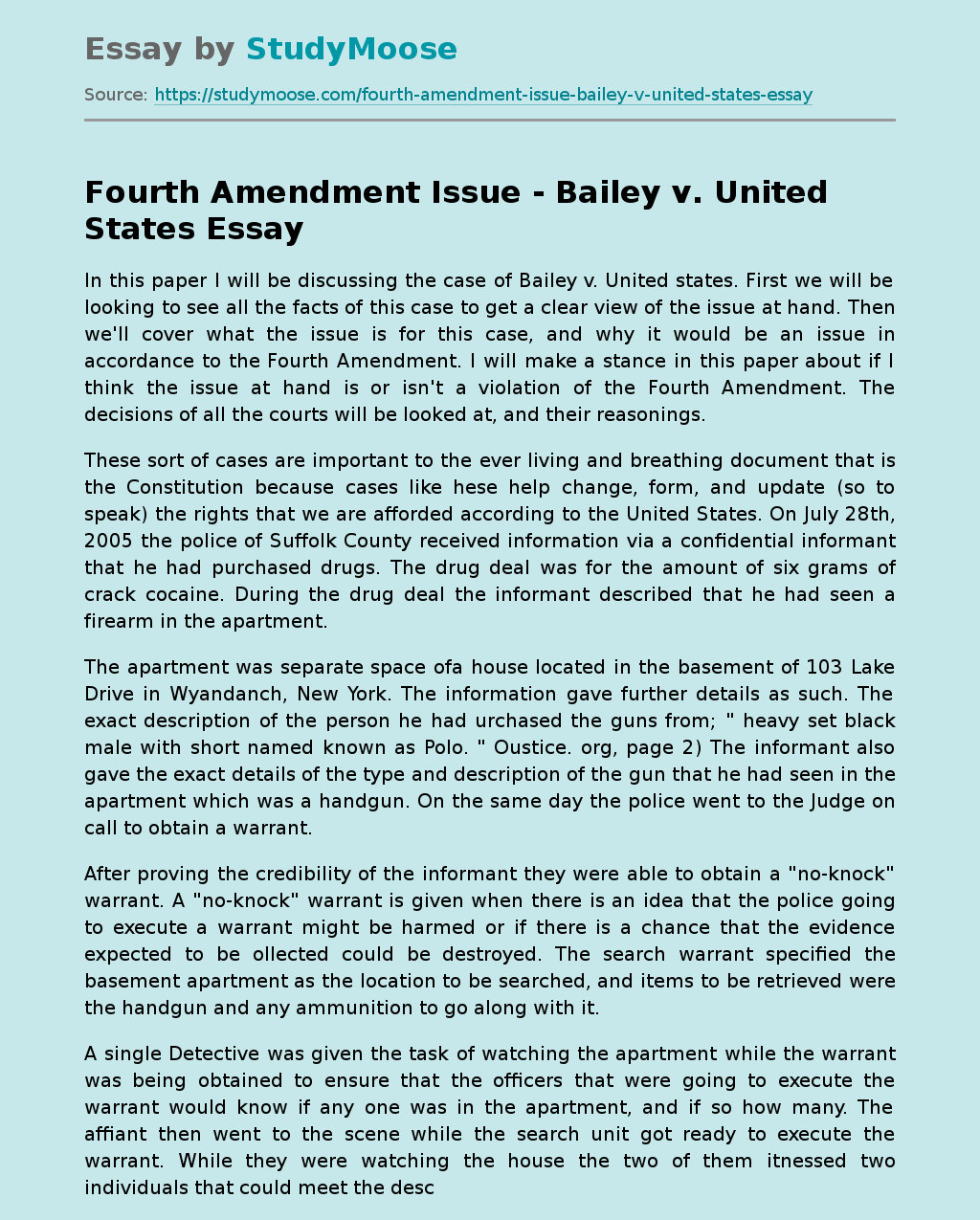