"A Few Notes for Orpheus" by Don Bailey

In the short story “A Few Notes for Orpheus” Don Bailey portrays the protagonist, Jake as an isolated, resentful, and hypocritical man.

As the story begins, Jake is sitting alone in his room, living in self-isolation. He is always “telling [himself] that [he] likes [his] privacy, although sometimes he feels _too_ alone. The only contact Jake has with the outside world is through his telephone, and as he receives a phone call from his mother, a woman who he hasn’t spoken to in a long time, he wishes “[he] had disconnected” his phone, or “never had [it] installed”.

Jake is almost glad to hear her voice, but assumes that something is wrong because she never called him. Jake is uninformed about what goes on within his family. His mother has “never once mentioned cigarettes that [he] could remember”, cigarettes that would later result in his father developing cancer. Jake also has never made the effort to re-establish a bond with those who he has lost contact with, such as his mother, father, wife, or daughter.

Jake resents the fact that he is so isolated but doesn’t want to take the initiative to change his lifestyle. He resents how neglectful he has been of his daughter, Bernice, and resentful that he has never been able to live up to his father’s expectations as a child. When Jake brings Bernice along to finally meet her grandfather, she is effortlessly accepted by him. Jake has always tried so hard to be accepted by his father, but all of his attempts had either gone unnoticed like how “the old man hadn’t been around when [he was awarded with a] certificate [in Red Cross life-saving]”, or when they had failed.

He “[has] always resented that about [his father]; his attitude [towards his frailness]”. His father had been somewhat understanding, so he showed it through his polite smiles. The emptiness of those smiles had hurt Jake through the years, stripping him of an enjoyable childhood and eventually making him resent every aspect of it.

Jake, who is oblivious to his hypocrisy, doesn’t initially realize the number of “statues” he has made. Throughout the story we are exposed to frequent statue-making and Jake’s dislike of statues because “Statues were the way other people made you stand still – like dying. People loved you, made you their hero, and killed you so they could build a monument to their feelings.” Jake has made statues of “the old lady”, the living soap opera; his wife, the reformer; “the kid”, the infiltrator; and “the old man”. The statue of his “old man” is significantly different to the shriveled old man he actually is. Jake has “always thought of [his father] as being bigger”. Jake also included his father’s infamous polite smile, one that had been used to hide the shame that he felt in regards to Jake.

Bernice has never had a complete statue of Jake because Jake wouldn’t give her enough time to make one. She knew Jake as “the man that used to live with [her]”, not as her father. During their trip to the cottage, Jake allows himself to bond with Bernice. She “knew all the gestures that [led] to making [him] stand still for statue making – to become a hero”, even if it was only for one day. This is the first step to Bernice experiencing what it is like to have a father. Even though Jake wasn’t able to bond with his father, he didn’t have to put Bernice through the same pain or make the same mistakes.

Don Bailey helps us perceive Jake as an isolated, resentful, and hypocritical man by exposing us to Jake’s opinions concerning statues, his family, and his childhood. Jake’s pain growing up ultimately contributed to the construction of his beliefs and would further teach him a lesson on how to avoid making the same mistakes that his father made, so his daughter would not have to experience the same pain while she grew up.

"A Few Notes for Orpheus" by Don Bailey. (2016, Jul 05). Retrieved from http://studymoose.com/a-few-notes-for-orpheus-by-don-bailey-essay 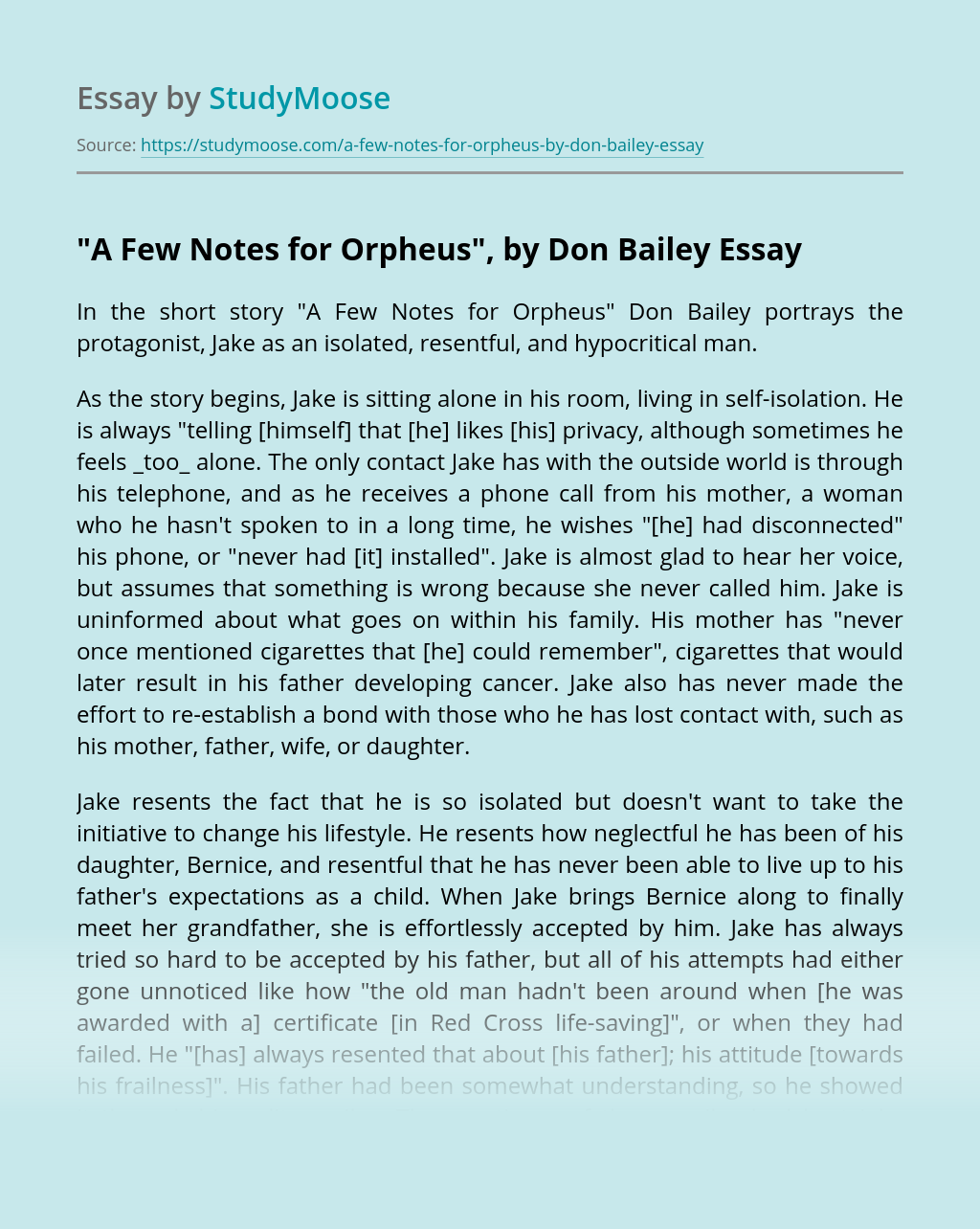 Don’t waste time
Get a verified writer to help you with “A Few Notes for Orpheus” by Don Bailey
Hire verified writer
$35.80 for a 2-page paper
Stay Safe, Stay Original