For Environmental Balance, Pick Up a Rifle

In the article “For Environmental Balance, Pick up a Rifle” by Nicholas Kristof, the author informs the reader about the importance of hunting, arguing that hunting needs to be brought back in the United States to control the deer population. He talks about the negative impact deer have caused in death of people by car accidents and with the destruction of the ecosystem with their overpopulation. The majority of deer have had a profoundly unnatural effect in certain parts of New York and New Jersey.

Kristof notes that these days many people view hunting as a cruel and brutal and are opting for other methods for deer control due to their sympathy for deer. He states that it is a waste of time and money for liberals and conservatives to be using birth control and condoms; to prevent pregnancy to the deer. With the decline in hunting practices in North America, further environmental imbalance continues, which makes hunting an ecological necessity.

If hunting were to increase in the coming years, individuals would be able to participate in the outdoors and enjoy nature. However, Kristof is an unreliable source in the knowledge of animal control and uses ineffective persuasion on this controversial topic.

When it comes to experts on animal control, environmentalists spend an excruciating amount of time examining animals that have had a habitat interference with the ecosystem. Nicholas Kristof is not a reliable source of information; he has based his article off of an outsider’s point of view. While a column piece points out issues associated within our society, Kristof has yet to have the appropriate background and information to support his claim.

Growing up on a farm in Oregon, studying law, and working as a columnist in The New York Times, gives some insight as to why Kristof wrote the article in the first place. This is because his audience includes a wide range of people; from highly educated to hardly any education. He is writing in a city where hunting is a foreign concept, which leads Kristof to writing a commentary piece that relates to other topics individuals know about rather than the information of the deer in general. For example, he states “It’s still true that in a typical year, an American is less likely to be killed by Osama bin Laden than by Bambi” giving the reader irrelevant material that has nothing to do with the topic of deer control. The author often states statistics that are in his favor, so his point is substantiated.

In an article, “Journal of Wildlife Management” by Clinton Faas talks about how people generalize all deer as something harmful without considering the different types of deer. Not many people know about the axis and white-tailed deer that have had a negative impact throughout the environment. While in the article Kristof’s states that “The New Jersey Audubon Society this year advocated deer hunting as an ecological necessity.” (Kristof, 13) Yet while researching the Audubon Society it states that the white-tail deer made resources scarce in the ecosystem and it shows no sign of resorting to the concept of hunting. Nicholas Kristof takes the word deer throughout his article and made an assumption that all deer are harmful to society. The idea that hunting deer should be encouraged for the benefit of society and that it connects people with nature is remarkably repugnant in Nicholas Kristof’s “For the Environmental Balance, Pick up a Rifle.” Many animal activists, such as the People for the Ethical Treatment of Animals (PETA) would agree that animals are not ours to use for food, clothing, experimentation, or entertainment.

The reason that it is important to treat other living things with dignity and respect is because they have the capacity to suffer as people do. We are told that it is wrong to hurt other people, physically and mentally. Although in the article Kristof becomes indulged in the fact that animals are the problem in society and should be put down for it. For instance he quotes “So it’s time to reestablish a balance in the natural world, by accepting the idea that hunting is as natural as bird watching.” (Kristof, 18) Yet the majority of the environments issues are caused by human actions. For example, misguided construction, irrigation and mining can deface the natural landscape and disrupt important ecological processes. Aggressive fishing and hunting can deplete entire stocks of species. Human migration can introduce alien competitors to native food chains. While reading Nicholas Kristof’s article, I analyzed and exposed the unreliable information he provided. He stated statics that were vague and unspecific, misguiding the reader with irrelevant facts on other topics, and did not have the appropriate background to be considered an expert on the problem of animal control. Overall, hunting is not the way to control the deer population nor has the author convinced his reader.

For Environmental Balance, Pick Up a Rifle. (2016, May 11). Retrieved from http://studymoose.com/for-environmental-balance-pick-up-a-rifle-essay 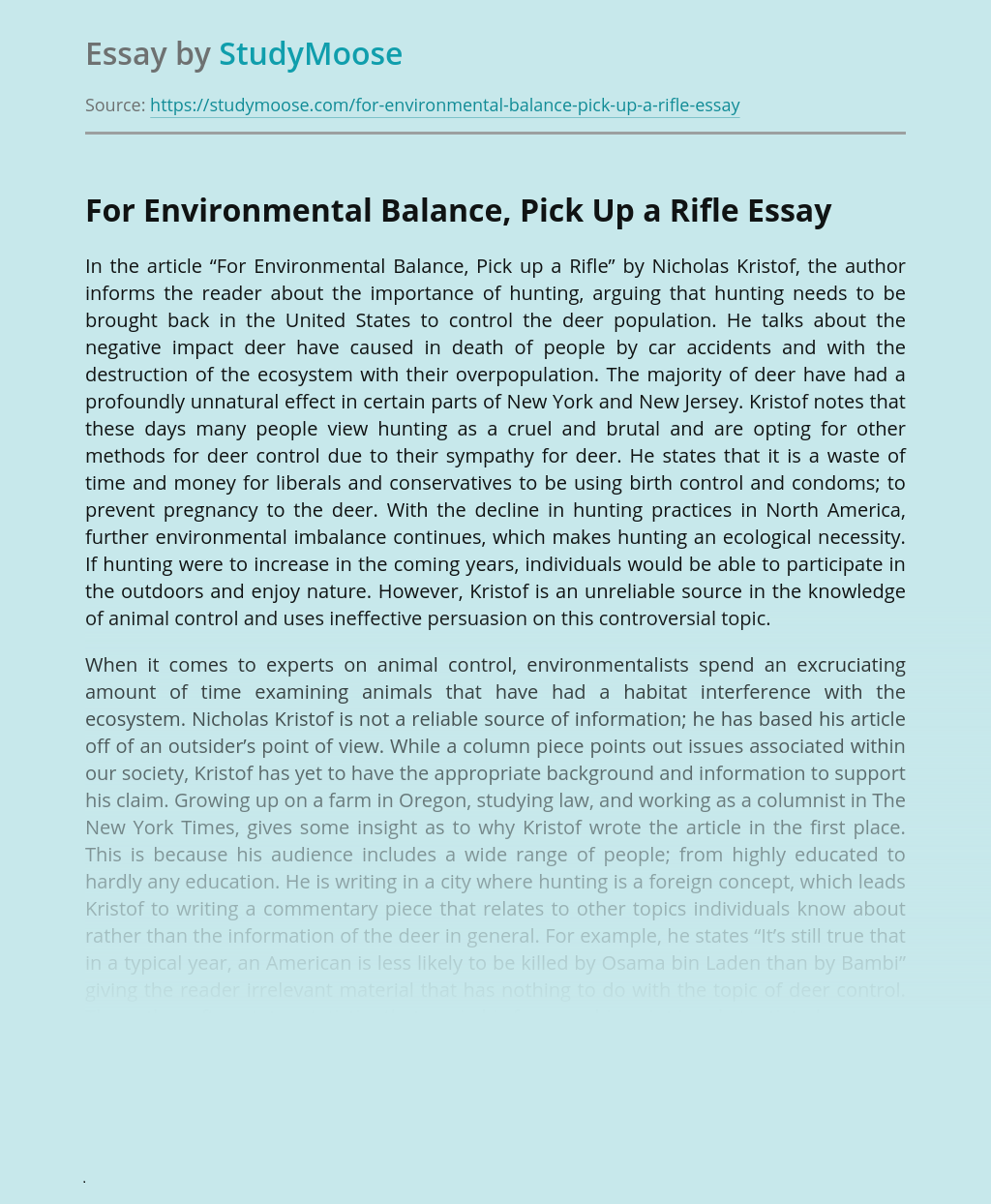 Don’t waste time
Get a verified writer to help you with For Environmental Balance, Pick Up a Rifle
Hire verified writer
$35.80 for a 2-page paper
Stay Safe, Stay Original