A Psychological Look Inside the Movie 'Good Will Hunting' Essay

In the film, Good Will Hunting, main character Will Hunting is a troubled young man from a poor neighborhood in south Boston. Following a youth of abusive foster care experiences and only himself left to trust, Hunting leads a life of self-sufficiency becoming a witty sharp shooter. A seemingly independent individual working as a janitor in renowned local university, MIT, he spends his downtime with a select group of buddies he considers family or isolated reading volumes of old novels and textbooks.

Don't use plagiarized sources.
Get Your Custom Essay on A Psychological Look Inside the Movie ‘Good Will Hunting’ Just from $13,9/Page

Upon being found as the secret sleuth to a graduate level mathematics problem, MIT professor Gerald Lambeau seeks out the janitor, Hunting, in efforts to engage his mind and make him an apprentice. As the plot twists, an earlier issue lands Hunting facing jail time for assaulting an officer during a fight in his neighborhood. With knowledge of this, Prof. Lambeau uses his university standing and professional name to allow a proposition to be offered to Hunting that Lambeau believes to be mutually beneficial: Hunting is freed from jail time under the stipulations that he works with Lambeau academically and sees a therapist for counseling purposes, simultaneously.

Lambeau and the courts offer. While there seem to be a few dilemmas listed above, including the professors initial interest in offering a lessened jail sentence for his potential protégé, the intent of his proposal was not for sole self-interest if the viewer understands his point of view and life experience. In his opinion, what person could possibly turn down an opportunity to work directly with an MIT professor and for free? For the purposes of this paper, the ethical dilemma discussed is what happens next in the plot of Good Will Hunting, and that is when Will (who burns through multiple therapists before connecting with one) and his eventual Psychologist, Sean Maguire begin working together. Two major occurrences happen, one is that in an early meeting between the two, Hunting begins to ‘test’ Maguire in efforts to make him lose his temper and it works. By discussing a painting in Maguire’s office that holds emotional value, Hunting is able to prod the weak areas of Maguire’s past and after he could no longer take it, he became irate and physically restrained Hunting by the throat.

To quickly go over this and how it relates to the American Psychological Association’s Ethical Principles of Psychologists and Code of Conduct, this seemingly obvious violation is of course beyond all measures of intentions of helping but is also cited in Standard 3: Human Relations (APA Code of Ethics, 2014) in 3.04 Avoiding Harm: “Psychologists take reasonable steps to avoid harming their clients/patients, students, supervisees, research participants, organizational clients and other with whom they work, and minimize harm where it is foreseeable and unavoidable.” In order to avoid such a situation, beyond the realm of Hollywood dramatization, a simple separation of the two people (professional and patient/client) to collect thoughts, breathe and reevaluate the circumstances would have been an appropriate alternative to physical contact. A separate yet major occurrence of ethical standards in the film involves the follow through of professional service to Hunting by Maguire as he deemed necessary when the role of Prof.

Lambeau intended cessation of therapy so he could carry out his own prerogative. Maguire positively maintained the five foundational general principles as found in the APA’s Ethical Principles of Psychologists and Code of Conduct: Principle A: Beneficence and Nonmaleficence – “…seek to safeguard the welfare and rights of those with whom they interact professionally…” Principle B: Fidelity and Responsibility – “…concerned about the ethical compliance of their colleagues’ scientific and professional conduct…” Principle C: Integrity – “…strive to keep their promises and to avoid unwise or unclear commitments…” Principle D: Justice – “…exercise reasonable judgment and take precautions to ensure that their potential biases, the boundaries of their competence and the limitations of their expertise do not lead to or condone unjust practices.” Principle E: Respect for People’s Rights and Dignity – “…respect the dignity and worth of all people, and the rights of individuals to privacy, confidentiality, and self-determination.”

A Psychological Look Inside the Movie 'Good Will Hunting'. (2016, May 27). Retrieved from https://studymoose.com/a-psychological-look-inside-the-movie-good-will-hunting-essay 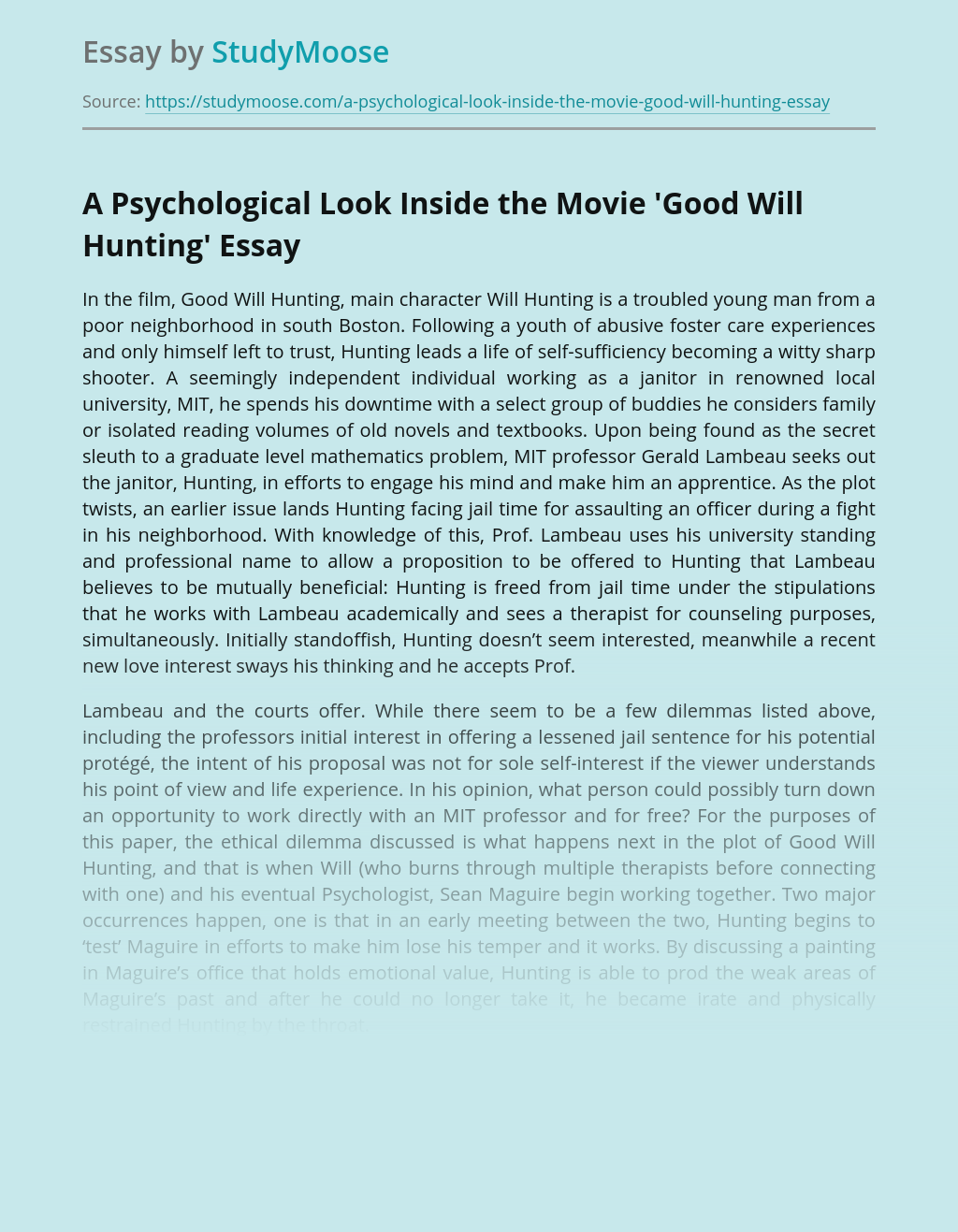 Good morning teachers and students, our understanding of Hamlet takes many turns and the most important of these is in act 3 scene II. As a pivotal scene in William Shakespeare’s play, audiences gain an understanding of the characters and their actions leading up to this point. Many of the themes in the play come... VIEW ESSAY

View sample
Get Essay
His Girl Friday: An Analysis

The 1940 film His Girl Friday is often described as one of the best screwball comedies ever made. Howard Hawks has succeeded in making this film a classic; the movie always being referenced as one of the best in its genre. Though this success, of course, was made possible by the teamwork of all the... VIEW ESSAY

Wag the Dog is a movie that demonstrates the power that media has in our society and the ways it affects it. Through the movie we see how media manipulates people’s thoughts, believes and the ways they interact. Barry Levinson, the director of the movie, emphasizes the importance of active media consumption as he shows... VIEW ESSAY

View sample
Analysis for the Movie " Up in the Air"

Ryan Bingham works for a company that helps and facilitates companies’ firing some of their worker. He and his colleagues make business trips all over the U.S and do their, in other words, they fire people. Ryan thinks that his job’s best side is to fly. He aims to save his frequent flyer miles until... VIEW ESSAY