Analysis of Character from Good Will Hunting Movie

The biopshychological approach to Will’s behavior would suggest that he is like he is because of his brain chemistry. The chemicals in his brain cause him to respond violently to pressure. The make up of his genetics cause him to be the way he is and he would be this way no matter how he was raised. This approach would also suggest that he could be changed by drugs to balance the chemicals in his brain.

The behavioral approach would imply that all of Will’s behavior is learned and he is a product of his environment.

Don't use plagiarized sources. Get your custom essay on
“ Analysis of Character from Good Will Hunting Movie ”
Get custom paper
NEW! smart matching with writer

He is violent because he was probably beaten as a child and as he grew up he learned to handle his problems through violence. He kept up this behavior because he was never punished severely enough to get him to stop. He learned that he could go to court and talk his way out of his situations which did not give him any reason to stop doing what he was doing.

He also learned not to get to close to anybody or open up to them. This was learned because some of the people in his life who were supposed to love him had abandoned him.

The psychoanalitic approach would indicate that Will’s behavior was from his subconscious mind and were impulses from childhood experiences. For example, Will was beaten up in kindergarten by a bully, later on in his life he sees the bully and starts a fight with him.

His decision to fight was made subconsciously from an impulse from a childhood experience. When he was a child he was also abused by his parents. Later in Will’s life, he often resorts to violence subconsciously due to his childhood beatings.

The humanistic approach would state that Will makes his decisions based on free will and is basically a good person. Will is how he is because that is how he wants to be. Will does not realize until later in life that he has to much potential to waste his life. Will is an overall good person. This is shown in his in his actions throughout the movie, for example, when he decided to keep working construction instead of taking a job with military intelligence because he would rather help people by making housing than get people killed.

The cognitive approach would suggest Will is how he is because that is how he sees himself. Will is a well educated man but for most of the movie Will sees himself as a nobody who will work for cheap and stay in the ghetto. Once his intelligence is noticed realizes that he has the opportunity to use his knowledge and make something of himself.

The sociocultural approach would say that Will is how he is because of influences from society. Society usually views people from the ghetto as people who will never make something of themselves so he feels the same way about himself. Society expects people from the ghetto to resort to violence to solve their problems. This is why Will usually resorts to violence in tough situations. Society also does not allow for men to open up and share their feeling freely. This is the reason why it is so hard for will to open up and get emotional.

Analysis of Character from Good Will Hunting Movie. (2016, Jun 24). Retrieved from https://studymoose.com/analysis-of-character-from-good-will-hunting-movie-essay 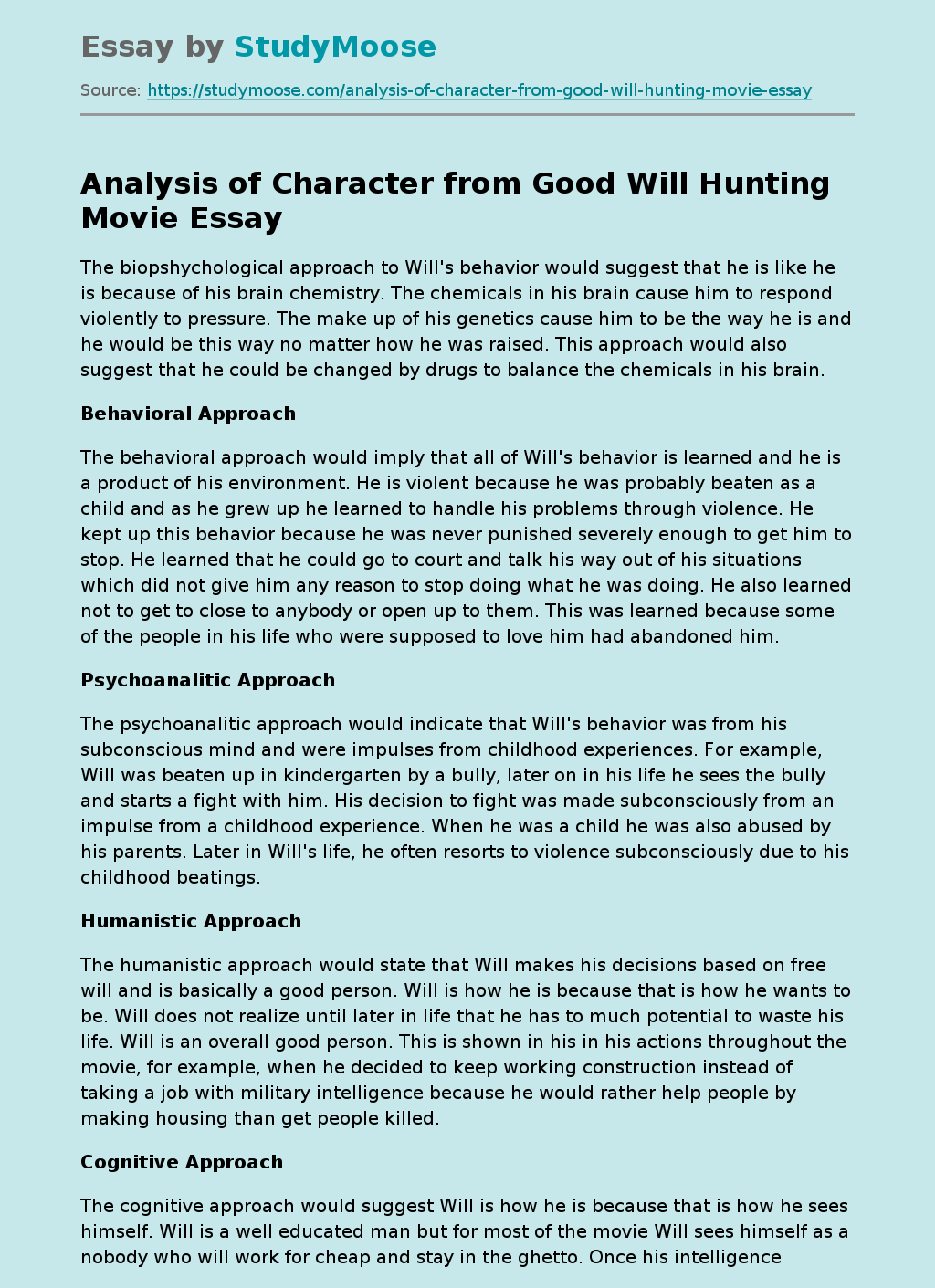