Explorers, Or Boys Messing About

In this article the writer, Steven Morris is very critical of the explorers behaviour. How does he make his opinions clear?

In the article published by the Guardian and written by Steven Morris, we get an immediate critical vibe towards the explorers and the situation they were in. Morris has rather sarcastically spoken about the events in a clever way, in which he manages to slate the explorers subtly without being too blunt.

We see in just the first paragraph the two explorers are seen as childish in the writer’s choice of view, by using the word ‘farce’.

Don't use plagiarized sources. Get your custom essay on
“ Explorers, Or Boys Messing About ”
Get custom paper
NEW! smart matching with writer

The use of this word creates the idea of ridiculous and so foolishly amusing behaviour, which seems uncaring in an article based on something rather serious. This has given us an automatic feel that Steven wants to portray them as immature and a joke. Throughout the article there are many other times the men are shown as juvenile by the writer. By choosing to use the quote from one of the explorer’s wives saying they were just ‘boys messing about with a helicopter’, they are once again shown as callow.

As well as it referring to fully grown men as boys, ‘messing around’ with a thing as serious as a helicopter in extreme conditions, it also makes Morris look as though there are many people on his side. The fact that he has a second opinion that what they did was stupid makes himself look far more reliable.

Steven Morris also expresses his negative opinion of the explorers through the engaging way of irony and sarcasm.

He uses phrases such as ‘their trusty helicopter’, putting invert commas around the word trusty himself. This makes the reader think that their helicopter was in fact the very opposite. Furthermore, he highlights their ironic failure in the fact that in one of their failed expeditions they wanted to demonstrate ‘how good the relations between the east and west had become.’ He puts this in to show another mission they had failed to complete when they were not allowed to cross the Russian borders. He too used a pun, by calling Mr Smith ‘Q’, a character from James Bond. This once again gives the idea that they were silly explorers living a fantasy world, like children pretending to be characters, in a humorous way again.

In addition, Steven has also very cleverly used the use of experts in order to make his opinion clear and article more reliable. A successful explorer quote is included saying that surviving the accident was ‘nothing short of a miracle’. This shows just how drastic the situation was, from a reliable source. That statement in itself works well to juxtapose his opinion that even though the situation was so serious he was still amused and able to make the jokes. Further on in the article he uses a helicopter expert’s quote saying, ‘I wouldn’t use a helicopter like that’. This highlights their stupidity in his opinion, once again backed up by someone who knows exactly what they’re talking about.

The last two paragraphs of the article are extremely important in him making his opinion clear as well as making people want to agree with him. By including what was said by The Ministry of Defence, ‘the taxpayer would pick up the bill’, the reader is automatically involved in the article on a personal level. By using this in the article he is getting everyday people to be on his side, and trying to make them see that they too are facing consequences from ‘ boys messing about’.

This supports his opinion well in making it look as though he cares for the everyday people(taxpayers) and they are part of the reason he is against what the explorers did. The closing sentence saying ‘they’ll probably have their bottoms kicked and be sent home the long way’, is a good way to close his article, leaving it in the readers mind that these people were immature, shown by the fact that they have been implied to have a childish punishment, once again to show how the writer is highlighting them in an immature and foolish way, as it becomes evident he thinks that they are.

Explorers, Or Boys Messing About. (2016, Aug 07). Retrieved from https://studymoose.com/explorers-or-boys-messing-about-essay 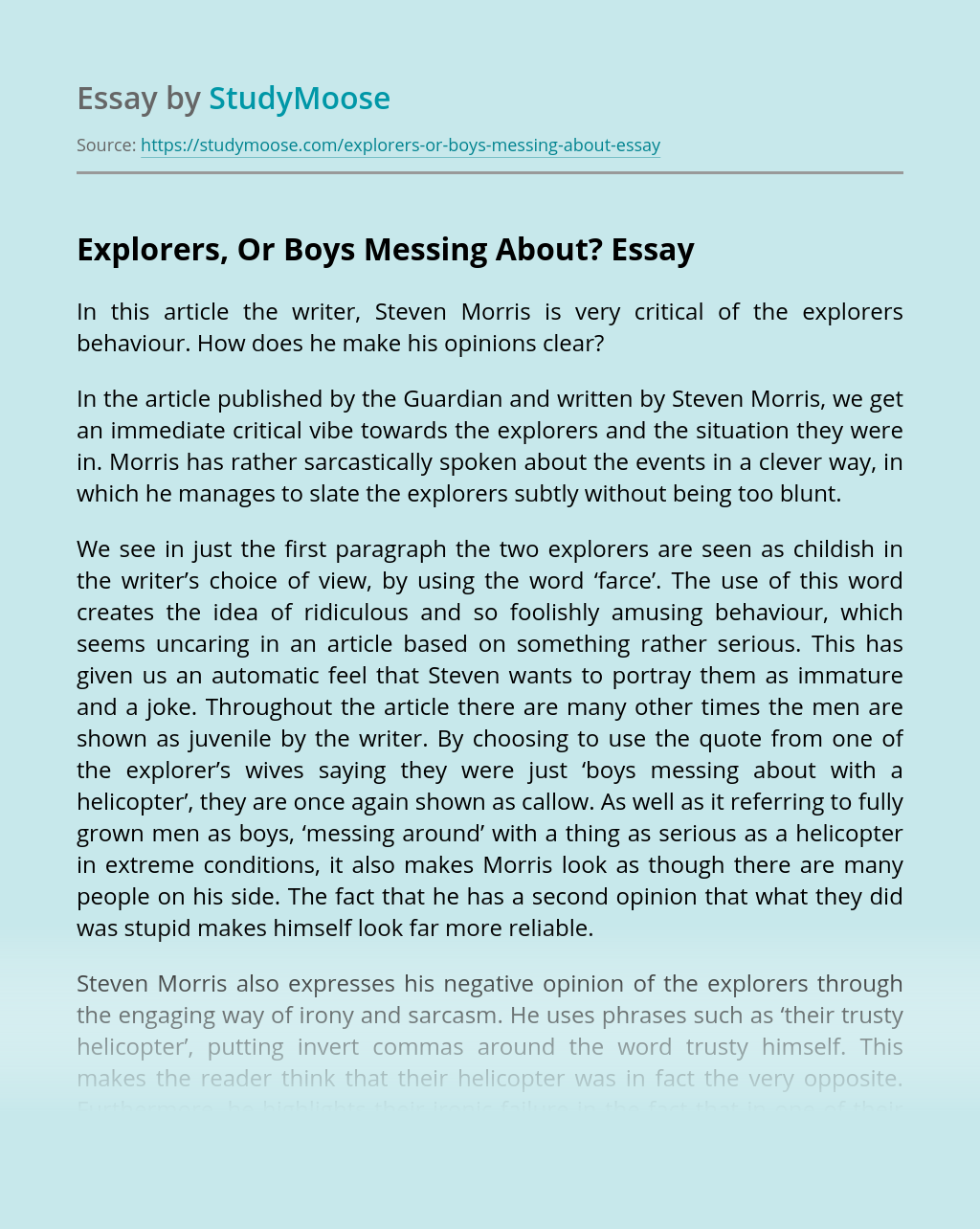