Does the writer Steven Morris, present the men as explorers or boy messing about?

Comment on point of view of the writer and how he uses facts and opinions. What words and phrases present the men in a certain way? (Be specific- verbs? Adjectives? Adverbs? ) Character impression Tone As we begin to read the article Steven Morris has written, our first impressions we get are very one sided. He described the boys more like “boys messing about” rather than professional explorers. It then shifts our opinions to make us see the other side of the men and their background experiences.

Don't use plagiarized sources. Get your custom essay on
“ Does the writer Steven Morris, present the men as explorers or boy messing about? ”
Get custom paper
NEW! smart matching with writer

In this essay I will explore why he portrayed the men as he did and how he did it effectively.

I will also share my opinionated thoughts and feelings about the men. If we start at the very beginning of the article, the title already starts our questioning about whether these men are real explorers. We understand that the taxpayers are the one who are suffering for the acts of the two individuals. Also the subheading also implies childlike behavior, “duo plucked from life-raft”.

The writer uses the word duo rather than, team or squad; doing this shows us that he is undermining the men and portraying them as young boys.

In the first paragraph he already starts insulting them, “their last expedition ended in farce… This confirms that they have already been on many “expeditions” and they all ended up just like this one. Also the word “farce” makes it sound like a comical act in a play. This also cross-references with the taxpayers having to pay for their actions once again.

Continuing, he then talks about how much effort it took to rescue these two men, “A nine-hour rescue”. The writer then explains who was involved in the rescue, “the royal navy, the RAF and the British coastguards. ” The money needed to use these people costs the tax payers even more money.

The writer in the next paragraph then mentions the opinions of experts and what they think of the men’s choices. “Experts questioned the wisdom of taking a small helicopter. ” This is a very useful and smart technique that the writer has done. He has used the word “experts”. This wins our vote over the men’s unreasonable decision; this makes us believe that they didn’t know what they were doing. “He said they were both in the life-raft but were okay and could I call the emergency people. ” This quote is what he told his wife; the writer then mocks him for it. He uses what he said against him to make Mr.

Brooks sound unthankful and unappreciative. Mr. Brooks uses the word “emergency people”, this implies that he expects to be rescued and he believes that it wasn’t his fault. This not true because we know that he could have avoided any sort of problems by not doing what he did; he also shouldn’t expect anyone to come rescue him when he was just reenacted something he has already done before. Then the writers build on the seriousness of the men’s actions continuing when he explains what lengths the rescue teams and crews had to go through.

“The royal navy’s ice patrol… 80 miles away surveying uncharted waters, began steaming towards the scene. ” They had to stop their important work to go and rescue the men. This again took more time and more money. The writer then goes on to talk about the men’s qualities and experiences. Examples of this are: “Mr. Brooks… has taken part in expeditions in over 70 countries in 15 years. ” This confuses the reader in a way that because before they were explained as childlike and now they seem more professional. But you still question their judgment about how they allowed themselves to be put in the situation they were in.

We still wonder whether they realize how much danger they put themselves into; the writer puts this danger, stupidity and realization to us. The men especially, Mr. Brooks seem to be very snobby and rude man They seem very overconfident and seem not to care about whether they cause the tax payers a lot of money. Lastly the writer ridicules the men by explaining one of their expeditions towards Russia, here the Russian government threatened to “lift them off the ice” if they crossed the border.

They said that their aim of the expedition was to “demonstrate how good the relations between east and west had become. This proves that not only were these men a problem in their own country but also an international problem. This can be cross-referenced to the event that the article was based on. This really helps the writer to interpret the truth about these men. We are humored even further by how the writer explains how a “spokesman for the pair” not knowing what had happened, stated that the flying conditions had been “excellent! ” This portrays the men even further like young boys rather then any sort of professionals. Also the use of the word “spokesman” also makes us believe the he or she is not a very reliable source.

In my opinion the writer is extremely correct about the men and their unnecessary actions. I also agree with the title, they are boys just messing about. They believe that they can do whatever they want without any consequences but that’s not true. The men cost the taxpayers thousand and thousand of pounds worth for a rescue mission. This is not right and they should be stopped; I believe that the writer Steven Morris helps us see the men’s true colours. I feel sympathetic to any taxpayer who has to deal with men who act like complete children; then expect the taxpayers to clean up after them, even for their mistakes.

Does the writer Steven Morris, present the men as explorers or boy messing about?. (2020, Jun 02). Retrieved from https://studymoose.com/writer-steven-morris-present-men-explorers-boy-messing-new-essay 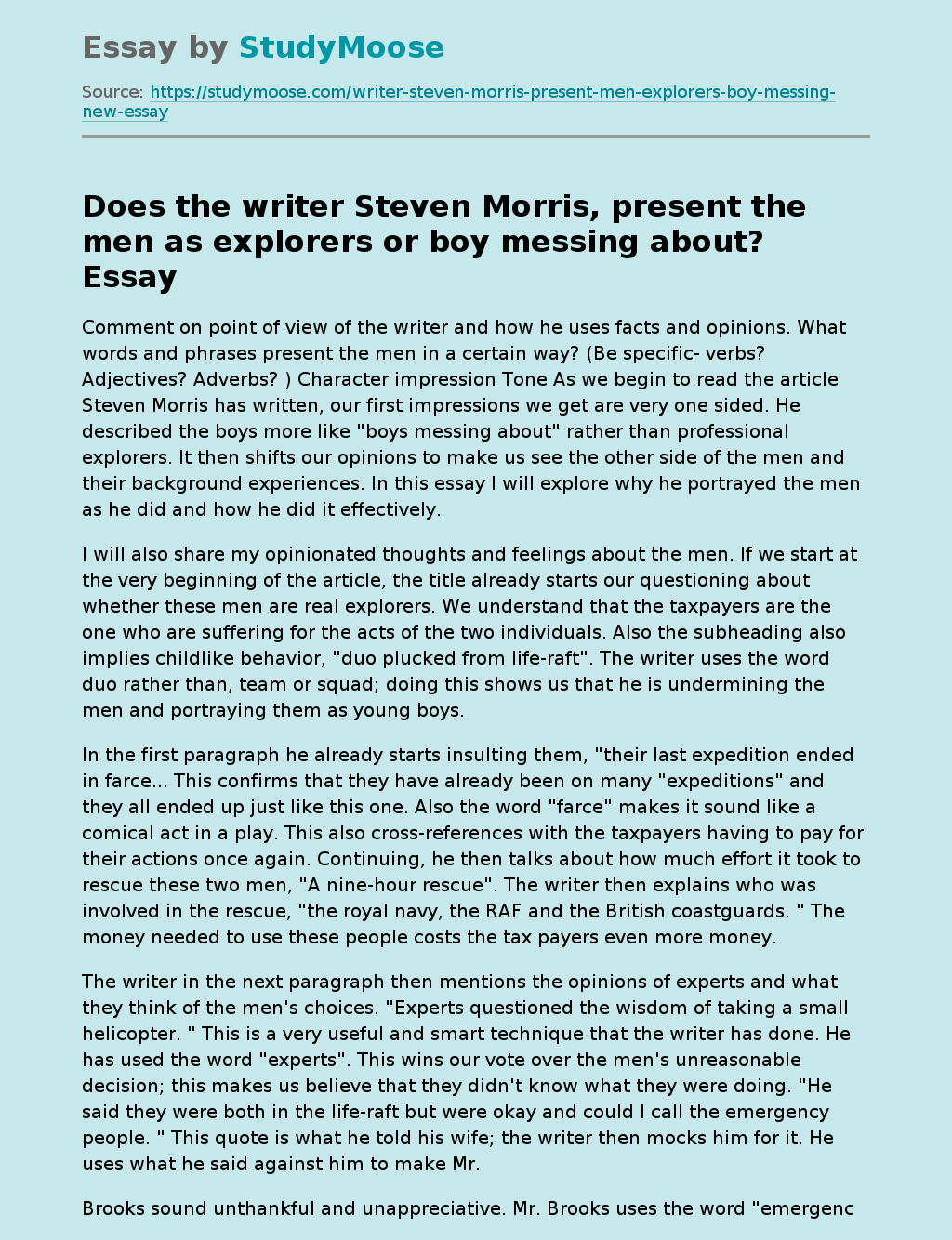