Underneath all the drama, revenge, and back-stabbing plots in the play Hamlet, by William Shakespeare, a love story, between Hamlet, the Prince of Denmark, and Ophelia, a member of the court, is gently described. The love, however, is a complicated one. Many questions have been raised to understand whether or not Hamlet was truly in love with Ophelia. Although there is a lot of evidence in the text for the reader to be easily convinced that Hamlet loves her with all his heart and soul, when we take a closer look and explore the details deeply, the truth can be revealed: While Hamlet actually uses his intelligence to trick the other characters into thinking that he loved Ophelia or to prove them that he indeed had gone mad upon his conversations with her when in reality, she was nothing more than a stepping stone in his dedicated mission.

Don't use plagiarized sources. Get your custom essay on
“ Expired Love in Play “Hamlet” ”
Get custom paper
NEW! smart matching with writer

The letter Hamlet sends to Ophelia is one of the earliest clues on why the reader may think that Hamlet’s love for her is genuine (Joshi).

‘…never doubt, I love,’ (2.2.127) he writes to her in the letter, telling her that his love is true despite everything else around her that may not be. Once Ophelia receives the letter, she immediately gives it to her father, Polonius. Hamlet did not trust Polonius just as Polonius did not trust Hamlet, and it is believed by many that from that moment on, Hamlet was forced to act mad in order to protect Ophelia as her father didn’t approve their relationship and pressured her to stay away from him.

The reason might be because he wants to appear as harmless. People, labeled as “crazy”, tend to get away with all kinds of things that ‘sane’ people wouldn’t be able to. Particularly in the Elizabethan era, which the play is set in, people could say anything without the fear of consequence because no one would believe an insane person if they ever said something. However, this is all a completely false assumption to make by saying that Hamlet pretended to act mad in so as to protect Ophelia. The truth behind this statement is actually revealed right at the beginning of the play. Hamlet acts mad only in order to get revenge on the murderer of his father. With that being said, it is obvious that he is using Ophelia. Since Hamlet is well aware of Ophelia’s obedience to her father, telling him anything and everything, he uses this to his advantage by acting insane around her. Manipulating her to maintain an image of madness is exactly in the favor of Hamlet since if Polonius plans to tell the King, Claudius, what he knows of, Hamlet is one step closer to eventually killing him. All along, Hamlet was smart enough to know how to use this obedient and innocent girl, who we keep seeing suffer intensely through her timid responses, to his own benefit, causing her emotional pain throughout the play from this moment on in the process (Iyinoluwa). These actions of Hamlet certainly has nothing to do with anything related to love anymore.

The moment when Hamlet suddenly says that he never loved Ophelia just after confessing his love to her by saying ‘I did love you once,’ (3.1.125) is another baseline for many people to argue that the reason behind this is since Hamlet knows that his conversation with Ophelia is being watched, he only tries to hide his true feelings from other people (Joshi). When they are done talking, he immediately asks Ophelia where her father is. When Ophelia tells him that Polonius is in the house, he replies, ‘Let the doors be shut upon him that he may play the fool nowhere but in’s own house’ (3.1.143). This implies that Hamlet is clearly aware that Polonius is watching them. At first, one may think that this is a piece of valid evidence in the process of proving that Hamlet did love Ophelia and that he was only trying to hide it. Even so, if to think deeper than the obvious, why does he hide his love for her? If he truly loves her, why does he need to hide it from Polonius, Ophelia’s one and only father? Looking back at the Elizabethan time, marriage wasn’t a decision that was made independently especially on the behalf of women. They certainly needed the approval of her parents before being given to a man and taking his family name. With Hamlet living in that era, he should have known better than to portray himself as an impolite and a disrespectful man to the father of the girl whom he supposedly loves, especially knowing that Polonius is hearing everything that he is saying. Instead, why wouldn’t Hamlet try to convince Polonius otherwise, stating that he loves her rather than hiding it? Some may argue that since he’s still trying to trick Polonius into the idea of him being crazy, he had to act accordingly at all times. However, it is still not a sensible reason to lie to her so. If his love was something truly real, he wouldn’t even take to risk to sacrifice their relationship in the means of losing his lover’s trust. Ultimately, it just looks like he’s still using her.

In the graveyard, Hamlet confronts Laertes about his accusations that he never loved Ophelia, and he responds by saying ‘I loved Ophelia. Forty thousand brothers/Could not with all their quantity of love/Make up my sum” (5.1.285-287). Hamlet expresses how he feels devastated over losing her forever and that he is just as sad as Laertes. He tells Laertes, ‘Be buried quick with her, and so will I’ (5.1.296). With these words, it’s clear that Hamlet feels like he has nothing to live for now that Ophelia is gone (Joshi). At this point, even though he has no reason to defend his love for her as she is dead, yet he still does, and this is another reason why many people argue that Hamlet’s love for Ophelia was real. The dilemma with this deduction is the funny fact that the reason why Ophelia killed herself in the first place was because of how Hamlet treated her while she was still breathing. In Act 3 of the book, Hamlet took out his feelings of frustration and rage against his own mother, Gertrude, on Ophelia. He punished her for what he thought his mother should be punished for, even though Ophelia had done nothing but to only shown the traits of a kind, innocent and decent human being and yet, Hamlet insulted and hurt her deeply, which is unacceptable in any case to do so for a real, loving man (Iyinoluwa). She was truly convinced that he didn’t love or care for her even just a little bit. These key incidents can’t be ignored while considering the reasons why Ophelia has also gone mad and eventually got drowned. He just takes the opportunity to clear up both his name and his guilt that he’s the one responsible for everything, but no matter what comes out of Hamlet’s mouth on top of that grave, his words don’t matter now. Actions always speak louder than words, and Hamlet proved that by his toxic behaviors towards Ophelia in the past again and again. He chose to inflict this much pain into her even though there were plenty of other ways to play out his madness. If Hamlet really loved her, why did he treat her with such disrespect, damage her emotional state and allow things to an extent where she was pushed to her own death? And the ultimate question is, even if he did love her, what kind of love is that?

All in all, at the first look, many readers may believe that Hamlet’s love for Ophelia was true in its core, however, after analyzing the main plot of the story and the mentality of the male human mind while diving deeper than the surface, it is undeniable that Hamlet never really cared for and respected Ophelia as a woman, and he was consequently only playing with her emotions in order to be successful with his devious plans. Seeing her as a receptacle for his ideals, Hamlet only brings his relationship with Ophelia to a piteous end (Samons). On the contrary, people still claim that he loved her as much as he could, but he couldn’t love much, did he? He was so preoccupied with his own problems that by the way, in which he hid his so-called love for her in front of the others, he used her to his own benefit as if she was some kind of an object, a tool or as his pawn in his own little games. 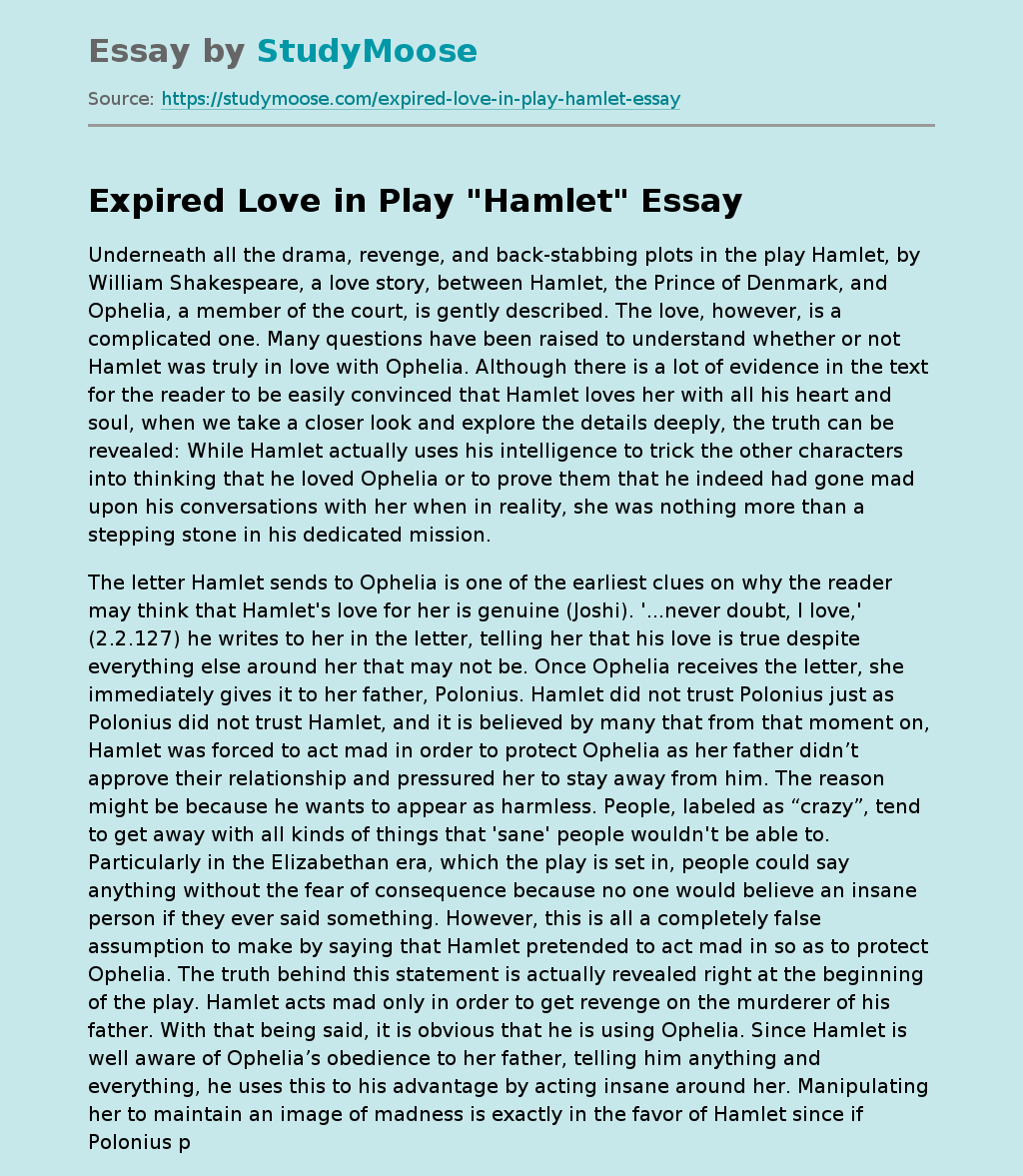