Existence of Human Precedes its Essence

Man’s existence precedes his essence according to Sartre

Sartre argued that man has not set nature; there is no path set out for any man to follow. This is due to the non-existence of god. Sartre argued that if god did exist, we would have a purpose in life and know exactly what is required of us as human beings. However, without any guiding force, we are completely free to live our lives however we please. This is what Sartre is indicating when he uses the phrase ‘existence precedes essence’; Sartre argues that we are almost thrown into existence without any predetermined purpose.

Don't use plagiarized sources. Get your custom essay on
“ Existence of Human Precedes its Essence ”
Get custom paper
NEW! smart matching with writer

Sartre uses the example of a paper-knife to illustrate an object where essence precedes existence. A paper-knife, like any other article of manufacture, is carefully constructed with a very particular purpose in mind. The artisan has determined the shape, size, colour, weight and most importantly, the purpose of the paper knife before it is constructed. Thus, the paper knife is made deliberately with particular intentions; once the paper-knife has been constructed it will be used for its intended purpose and will continue to do so.

The argument of existence and essence links clearly to the ‘in-itself for-itself’ distinction. According to Sartre, any article of manufacture is an ‘in-itself’. The term in-itself refers to those things which have a set purpose and nothing else. Sartre uses the example of an inkwell. He argues that an inkwell will always be an inkwell and cannot be any other object. It has a set purpose that cannot be separated from it and no matter what other function we use it for, such as an object to throw at your enemy, it will always be an inkwell.

Human beings, on the other hand, are for-itself. A for-itself is a free consciousness without any fundamental purpose, it has the ability to reflect on itself and its activities. Sartre regards human beings as for-itself. As humans, we have the capacity to be anything we wish, we can choose our vocations, lifestyles and even our emotions. We are not bound in any way to particular path; thus, unlike the paper-knife or inkwell our essence is discovered and developed as we live our lives and are not set out at birth.

As a result of not having a predetermined essence, we as human beings individually pursue our own lives without any commonality with other people; there is no underlying human nature or shared characteristics that we can hold as binding factor. However, the plausibility of his argument is questionable. Sartre may be correct in asserting that we are free to pursue our own paths in life but does that mean we have nothing in common with our fellow men? It cannot be denied that we all share biological and genetic factors with all people. Arguably we can see this as our human nature. However, Sartre argues that the notion of human nature is ludicrous; rather than we share what he terms a human condition; we all have to live in this world and ‘labour and die there’.

Essence in terms of a given purpose that is fixed and unchangeable would come from God; the ‘supernal artisan’. God, if he existed, would create us all with a purpose in mind, with a destiny, which we are all to fulfil. However, according to Sartre, God does not exist. This Sartre is basing the argument that man’s existence precedes his essence on the sole conjecture that God does not exist. Arguably, Sartre is over-reliant on the non-existence of God; the existence, or non-existence in this case, of God cannot be proven thus basing a central argument on this premise would be difficult to uphold. Also, Sartre makes no attempt to argue for the non-existence of God, rather, it is just assumed.

Although Sartre seems to be claming that man has no essence, it can be argued that he is, himself giving a man an essence. Arguably, Sartre has made freedom and although it may manifest in different ways in different people, it is a fundamental property we all share. However, accepting this argument would depend in the definition of essence; if we are to see essence in the sense of determining actions and choices then this argument would lack support.

Overall, Sartre seems to make a solid and credible argument regarding mans existence and essence; we are not born with a preset nature and purpose and are thus free to pursue any path we wish. However, Sartre’s theory has had a series of man’s existence precedes essence is a matter of weighing up the credibility of both sides of the argument.

Existence of Human Precedes its Essence. (2020, Jun 01). Retrieved from http://studymoose.com/existence-of-human-precedes-its-essence-essay 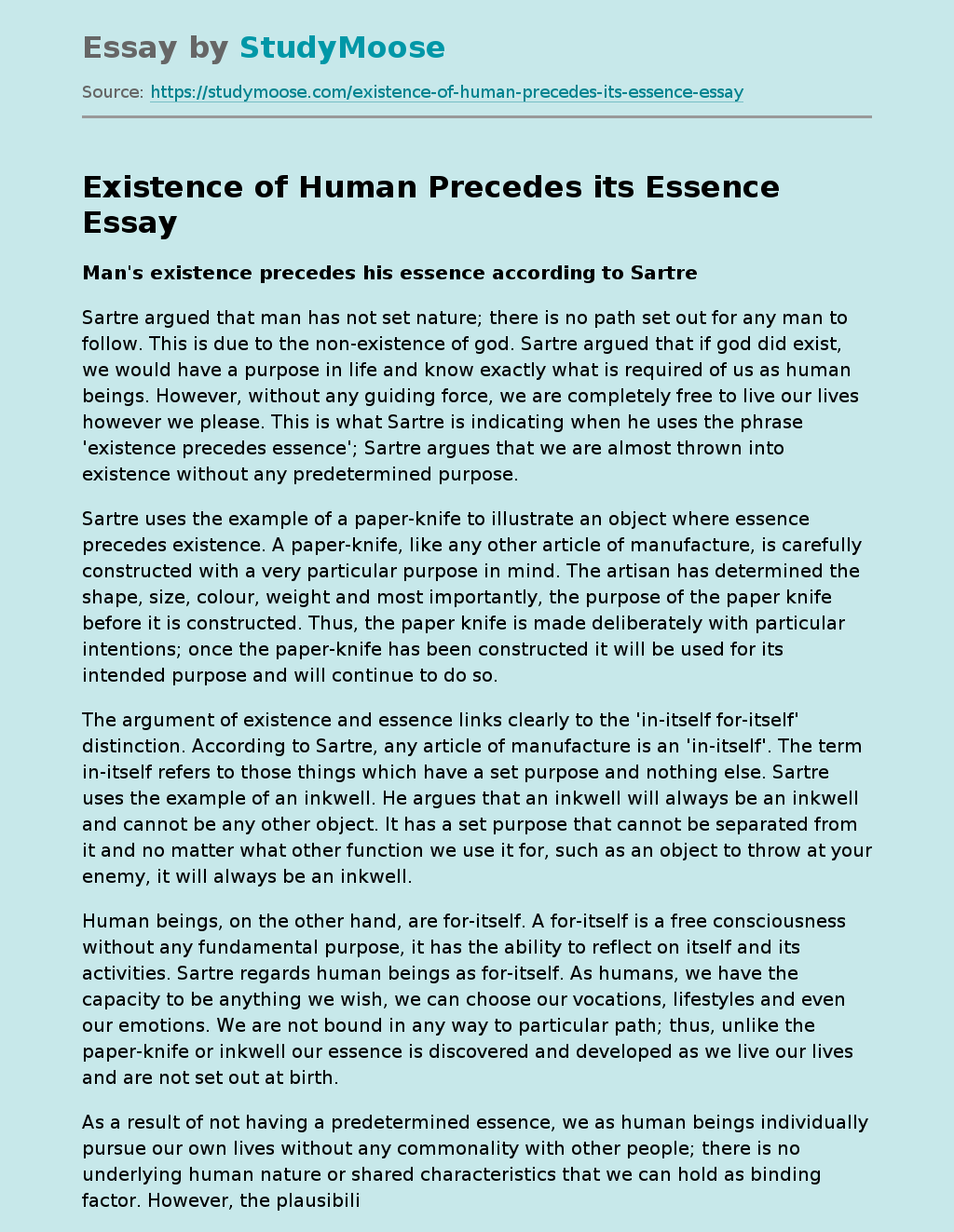