In a society based only on materialistic possessions, sometimes we overlook even the simplest of things, and the most valuable to our survival as a human race and as a planet. Everywhere around us people envy great architects and artists because of their remarkable creations. Though, we, as a human race disregard the importance of less tangible commodities, developed by the greatest artist ever, Mother Nature. She has given us the most magnificent and staggering artwork imaginable, our environment. But only through the most convoluted processes have these masterpieces been created.

Don't use plagiarized sources. Get your custom essay on
“ Evaporationin Our Daily Life ”
Get custom paper
NEW! smart matching with writer

From humans to flowers and everything in between, a thorough process is behind everything. Before birth, for example, human must grow and develop through their three trimesters. Also before a plant is full-grown, it must first mature and survive as a seedling. Because although living creatures may be the most evident of Mother Nature’s creations, there may be more to it.

Life is only possible in a suitable environment.

On earth, that environment is created by our weather dynamics. Weather dynamics is the study of how the motion of water and air cause weather patterns. Our Global weather systems are reflections of our atmosphere and its make up. Weather systems react to the temperature, humidity, and atmospheric pressure. These three control systems are affected by one simple process, evaporation.

Evaporation is the conversion of liquid water directly into its vapor or gaseousstate. Through evaporation, water from the surface is transferred straight into the atmosphere. Worldwide, evaporation is usually seen as the moderator of weather.

This leads us to the question that must be answered, to know and understand the factors that affect the rate of evaporation. Through extensive thought and calibration we have found that the six factors, which effect evaporation are temperature, surface area, humidity, presence of foreign particles, atmospheric pressure, and wind speed.

The first and most important factor that affects evaporation is temperature. Temperature is the measure of the average amount of energy in the particles of a particular substance. Many people are probably already aware that when water boils, it will evaporate into the air as a vapor or gas until there is no liquid left in that particular container. This is true, because liquids achieve the peak level of evaporation when heated to their boiling point. What few realize though, is that as temperature decreases, there is still evaporation, the amount occurring at any given time though, does decrease with the temperature.

Temperature is most likely the number one factor when looking at evaporation in relation to rainfall around the world. But aside from Temperature, many other factors are recognized as affecting the rate of evaporation.

The second factor, which we believe, plays a role in the rate at which evaporation occurs is surface area. Surface area of a liquid could be defined as the area or amount of water which in constant contact with the atmosphere. Surface area plays a large role in our weather systems, as shown by our oceans. Our oceans our widely exposed to the atmosphere and have a large surface area. This in turn allows them to produce most of the moisture in the air through evaporation.

The change in the rate of evaporation by surface area is evident for all eyes in the proceeding experiments later in this report. The effect that surface area has on evaporation can be explained using the example from the understanding concepts question #1 on page 535.

In this question it states that one litre of water is placed into each a pie plate and a jar. They were both placed into the same room and were given time to evaporate. Our prediction is that the water in the pie plate would evaporate quicker, assuming its opening was wider than the jar. This would be because of the difference in surface area. In this case as in every other increase in evaporation due to surface area increase, it can be explained by one simple fact. Allowing the two reactants (air and water) to contact more of each other will increase the rate of reaction. This occurs because of the increase in the number of collisions occurring between the two substances, according to the collision model, will increase the rate of reaction.

The third instance where we believe the evaporation rate would change is with the fluctuation of relative humidity. Humidity is defined as the amount of water vapor in a defined space relative to the amount of air present. Humidity can be used to explain question #5 on page 235, why people who are in Arizona at 33 degrees Celsius feel more comfortable than people at the same temperature in Toronto do. The general population usually does not like the heavy feeling of moisture in the air and in Toronto, humidity is much higher than in the dry state of Arizona, which explains the comfort variation.

Also, in reference to question #3 on the same page, humidity would affect the evaporation of these lakes. And in all instances, humidity strongly affects the rate of evaporation of any body of water. Unfortunately, although we, as a group, were not able to test our hypothesis because of lack of materials, we feel that we can strongly support it with scientific fact. Directly, humidity fills the space in between air particles with water vapor. Because these spaces are filled, now there is less room in the surrounding environment for water molecules escaping from the water.

In turn, the increase in humidity will decrease the rate of evaporation by “raising the bar” for the amount of activation energy that any given particle needs to escape into the atmosphere. This decreases the effectiveness of collisions in the physical change of evaporation occurring here. On the other hand though, a decrease in the amount of moisture in the air will increase the rate of evaporation by increasing the effectiveness of collisions in particles trying to escape into the atmosphere. In short, humidity plays an important role in evaporation worldwide.

The next factor that affects evaporation is the presence of foreign particles, and the most predominant, salt. Water, as we know, is rarely found pure which is why we conducted this experiment. As presented by question #4 on page 535, we pondered whether salt water or fresh water would evaporate faster. Our conclusion that we reached is that fresh water would evaporate quicker. First of all, salt water is not a chemical combination; therefore, no properties, such as, the boiling point would change by a great amount. Salt water though, does have a slower rate of evaporation because it reduces the amount of water particles that have access to the air. With less water molecules able to reach the air, fewer particles have a chance of escaping. This is true and is supported by the collision model, because in the model, as in this example, the reduction in the collisions between particles causes the rate of evaporation to recess. But, salt content is not the only factor that has an affect on the rate of evaporation of water.

The sixth and final factor that affects the rate of evaporation is wind speed or the presence of wind. Wind is generally associated with the horizontal movement of air, as a type of advection. As asked in question #2 on page 535, increase in the speed or amount of wind, increases the evaporation of a liquid. These can be explained by using our experiment with the vacuum hood.

As water evaporates, the humidity of the air increases because the spaces between air particles are becoming filled with water molecules. As we have learned, leaving these particles in the air increases humidity and subsequently reduce the rate of evaporation, the opposite affect of which we want. What wind does, is it blows the water particles away from the surface of the water allowing more room for particles to evaporate into the atmosphere.

All in all, weather makes life possible, but one of the most predominant forces in the complexity of weather is the process of evaporation. And although, this process is overlooked by many, it is valued and recognized as an important process in sustaining life by all members of our group. With 80% of all water coming from saltwater oceans, factors that affect evaporation must be studied in order to utilize this natural purifying process to our advantage. By studying temperature, surface area, humidity, presence of foreign particles, atmospheric pressure, and wind speed, we may some day do what Mother Nature has been doing for centuries, use evaporation to our advantage. And as a group, individuals in a worldwide community, I could only imagine the possibilities if everyone was informed about our weather. Because what some take for granted now, may not be there when we need it, in the end, necessary for survival. 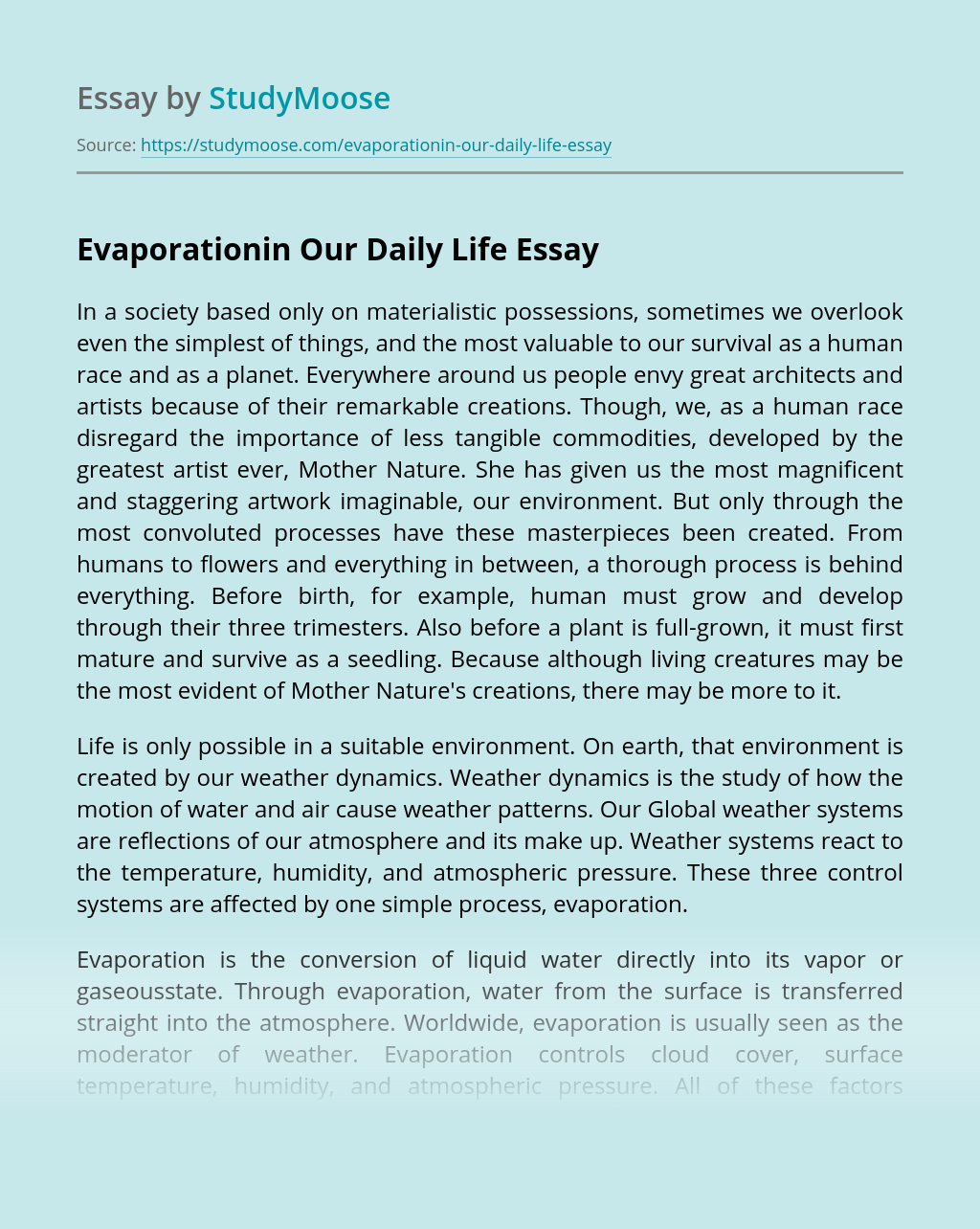