European Imperialism and its Impact on Africa and Asia

European imperialism in Africa and Asia developed as a result of certain motivations which seemed to fit the prevailing world view following the Napoleonic wars.  Economic interests (ie, global expansion of domestic markets), maintaining the safety of trade routes, keeping colonies free from foreign influence and threats, national prestige in maintaining colonies, and finally, living up to a moral duty and the missionary and evangelical movements were all motivations given by European governments to justify its interference into Africa and Asia.

Don't use plagiarized sources. Get your custom essay on
“ European Imperialism and its Impact on Africa and Asia ”
Get custom paper
NEW! smart matching with writer

As Europe became more crowded, as continental empires declined, and a more current world view came into focus, the Europe’s powers were motivated to find a replacement system that would best preserve their respective positions as a world economic, military and moral leader.

Great Britain took the lead in establishing systematic imperial possessions in African and Asia.  Power, prestige and economic interests lay at the heart of building Britain’s empire.  The reason was simple, a vast global economy with Britain at the hub was sure to ensure the economic health and vitality of the British (Hyam 1).  Forging a permanent presence in India, China and Africa were vital to this cause (Brown 199-200).  Britain’s ‘Grand Design,’ which sought to enhance Britain’s power through the expansion of informal empire, was the name of the policy attributed to Prime Minister Palmerston in the 1850s and ‘60s (Hyam 86). As the British empire began to decline towards the end of the 19th century, other countries, like Germany, the Netherlands and France opted to partition Africa and Asia, creating pieces of the pie sufficient to sate everyone’s appetite from the 1880’s through the onset of World War I.

Imperialism had a positive and negative impact on the European nations.  Though trade and prestige were greatly increased, eventually, competition developed for the more lucrative portions of the colonized East.  This led to showdowns between western powers on African and Asian territory.  The British and the Russians fought the Crimean War in the 1850s (Brown 197) and the British and the French nearly had an armed along the Nile at Fashoda in 1898 (Steele 328).  The notion of any of these nations being at odds with all of the others, led the nations to seek alliances amongst themselves (and Russia and Japan), which was a major reason for the start of World War I (Hyam 271).

The impact on the African and Asian nations was far more negative than positive.  China suffered the humiliation of Opium wars, during which the British forcefully created a domestic opium market in China to finance its own trade (Brown 205) and the Boers of South Africa were colonized for hundreds of years by the Dutch and the subject of Atrocities by the British during the Second Boer war from 1899-1902 (Steele 360).  To an extent, the imperialists did improve the infrastructure (by way of railroads and ports), but on the whole, the Europeans ruled the colonized peoples of Africa and Asia a sense of racial superiority and propensity to violently subdue any native unrest.  Another negative impact was the ubiquitous slave trade, especially during the first half of the 19th century.

The African and Asian continents were collected, traded and bandied about between the powers of Western Europe as if they were common commodities.  When the colonies had lost their utility, often times the European imperialist would pack their bags and leave, without regard to the state of the people or land they were leaving behind.  Despite the legitimate motivations (such as expanding trade) and self-serving justifications (such as Christian missions) used by the Europeans at the time, the impact of imperialism is still felt by peoples indigenous to these lands today.  Based on all of the above, it is safe to conclude that European imperialism on the whole had a negative impact on the Africa and Asia.

European Imperialism and its Impact on Africa and Asia. (2016, Sep 24). Retrieved from https://studymoose.com/european-imperialism-and-its-impact-on-africa-and-asia-essay 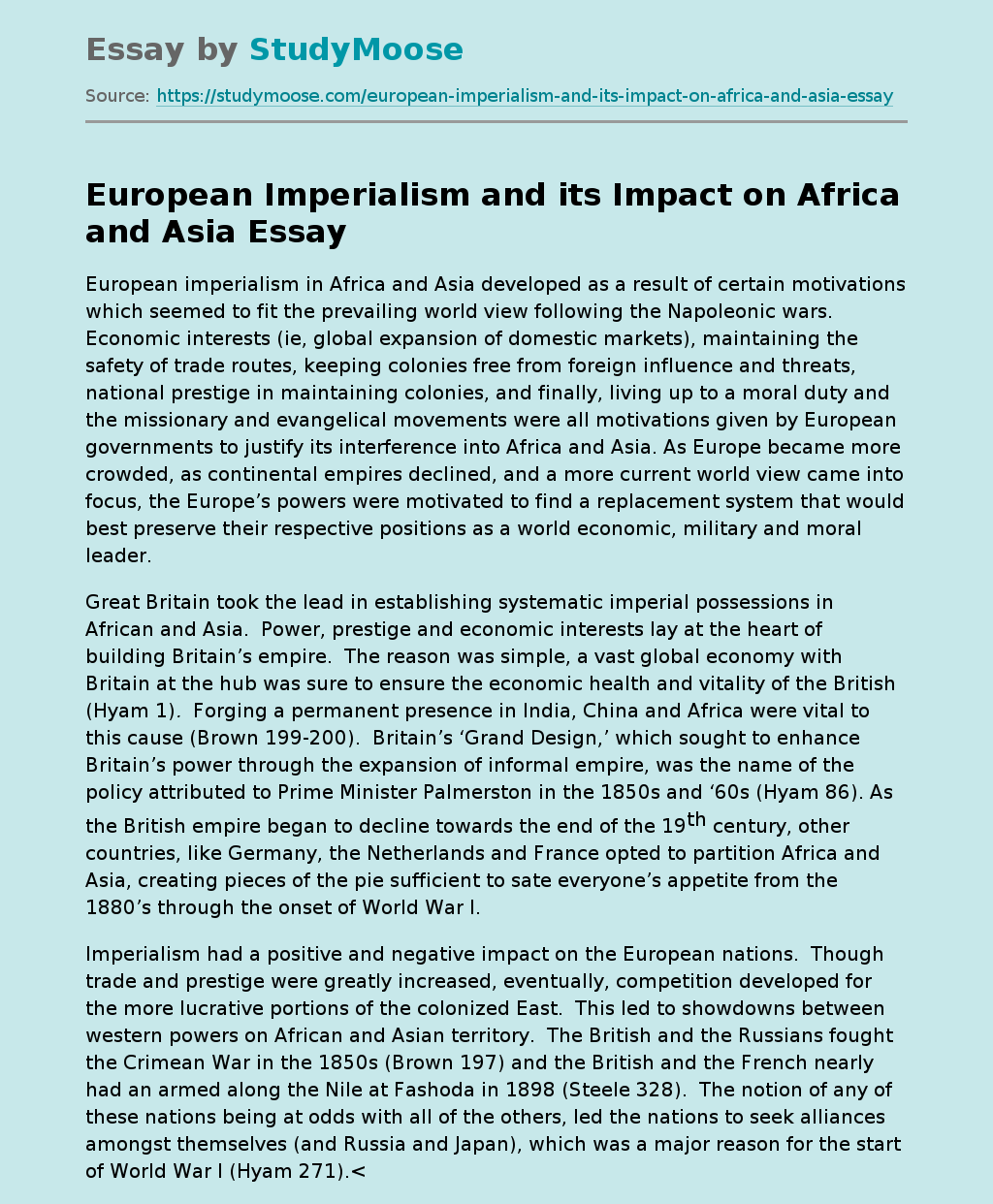