“I often asked what is the most serious form of human rights violation in the world today and my reply is consistent: extreme poverty.” (Mary Robinson, 2002) World Poverty: New policies to defeat old enemies, Bristol: The Policy Press, 2002, p. x1 This essay will account for and assess ways in which contemporary society seeks to end world poverty by doing the following. As poverty mean different things to different societies the essay will give a meaning for poverty that will mirror this; it will refer primarily to theoretical perspectives of, Amartya Sen and will draw on studies of Peter Townsend, then it will examine how malnutrition, lack of education, debt and unequal life chances can cause the cycle of poverty.

Don't use plagiarized sources.
Get Your Custom Essay on Essay on Poverty Just from $13,9/Page

Finally, it will inform on how world organizations like World Bank, United Nations and Steven Sinnot Foundation are trying to improve living standards of millions. There is over one billion people living in extreme poverty in the world, Poverty shows itself in many different ways; they include not having a job or any means of earning or making a livelihood; hunger and malnutrition; ill health; limited or lack of access to education and other basic necessities; increases the risk of untimely death; homelessness; unsafe environments and social discrimination and exclusion.

There are two types of poverty; absolute which is where people do not have the means to obtain the basic necessities to survive, they live on less than $1 (US) per day, on the other hand there is relative this is where people have jobs but the wage is so low that they cannot afford the necessities that others in their societies have, they could be relegated to absolute poverty with change of circumstance example becoming ill and having to give up work. (Gibbons, 2006). In 1995 in Copenhagen, the Millennium Campaign was created and agreed by 117 United Nations States at the World Submit on Social Development. The declaration dedicated the UK to the, goal ending poverty in the world through specific actions and with the cooperation of other international communities. After this task, forces were set up focusing upon different aspects of global poverty. Alcock, 2006), p, 48.

Peter Townsend theoretical stance on poverty is poverty equals low income and a disadvantaged lifestyle, people are poor when they cannot afford to buy the normal things like others in the society in which they belong; they are deprived of the lifestyle they should have. He sees poverty as relative. I believe that he was possibly influenced by the benefit system in the UK in which he was born. Whereas Amartya Sen see poverty as “unfreedoms”, his theoretical stance is that poverty is deprivation of “basic capability” not having the ability to work rather than not having any income, some of the reasons suggested are being too young or too old, gender and social roles, pregnancy and child care. He sees poverty as “absolute”. I believe his theories are influences by the society in which they were born and raised, a third world country with most of the population lacking the basic necessities to survive. (Alcock, 2006). Even in richer countries some groups within the society are very disadvantaged they do not have access to health care, education, jobs or any economic security.

America is one of the world’s superpower yet it has the highest poverty rate of any rich nation, According to the census bureau, 15 percent of Americans or more than 46 million people, live below the poverty line, defined as an annual income of $23,000 for a family with two children. Of those, six million live in extreme poverty, with an income of half that or less. (Cornwell, 2012) One of the causes of poverty is malnutrition, the United Nation World Food Program projected that 830 million people go hungry each day, most of them in the developing countries with calorie intake of fewer than 1,800 not enough to keep an adult with the energy needed to lead an active healthy life or to be able provide for themselves and their family, it takes their dignity away.

Of that number 200 million are children under the age of 5 years, they are underweight and ill, every year 12 million of them die of starvation, with so many children dying the future of their countries are gloomy. Another cause is lack of education, According to the United Nations International Labour Organization more than 218 million children one in every four are working in developing countries. 126 million are working in hazardous conditions, some work as servants for rich families, others work in agriculture and manufacturing, hotels they work long hours on very low wage, as result they are unable to go to school to learn skills that would offer them hope of ending the cycle that would most likely help out of poverty, so the cycle goes on. (Giddens, 2009)

Trade, Africa, though one of the poorest countries is rich in natural resources such as timber and oil but trading with the rest of the world is made difficult because of poor infrastructure, corruption the impact of AIDs on the population of working age. The rules of trade are very stringent and benefit the developed countries more than the poor ones, the poor countries are under cut by the rich as a result they are at a disadvantage. They end up with debt which they cannot pay back (Gibbons, 2009) Unequal life chances is another cause, there is an enormous difference in standards of living between people in rich and poor countries. 40 percent of the world’s poor live in poor countries, they live in absolute poverty. Almost a third of them are undernourished and almost all are illiterate, lacking access to basic education.

Many are from tribes or ethnic groups that differ from the dominant group in the society in which they live as a result they are discriminated against. The high income countries accounts for 15 percent of the world’s population they are responsible for 79 percent of the world’s annual output of wealth. They have decent housing, enough food, they have safe drinking water and so many life comforts that the poor countries could only dream off. There are also large numbers poor people in those rich countries but they live in relative as oppose to absolute poverty. (Giddens, 2006)

Education would make such a difference to these children and their families lives; it would provide them with skills needed to do skilled work, which would result in economic growth. Also educated people are less likely to have large families thus reducing toe world population. Education is an investment for the future; it is the quickest way to getting poor people out of poverty as seen in Katine which is an area in north east Uganda, population 25,000. A project called Katine Project is run in partnership with Barclays, The Guardian Newspaper and African Medical Research. It is structured around five key components, health, education, water and sanitation, income generation and empowers communities. It is centered on the schools in the area; its aim is to empower its young students. 4000 text books has been supplied to the schools, there is a 21 percent rise in enrolment with more disabled students, orphans and girls joining. Access to comprehensive education is key to the program. As a result of programs like these children world over will gain the skills needed to be able to compete for jobs, make informed choices, and become productive citizens of their countries. (Engage, Issue six)

World organizations such as World Bank, World Health Organization and The United Nations development program have tirelessly supported the cause of international poverty in different countries across the world. They have put together Millennium goals aimed at helping to get rid of poverty, some of the goals are to reduce by half the proportion of people without access to safe drinking water set in 2000, and they have produced annual report on the different aspects of the international dimensions of poverty. (Alcock, 2006) With so many millions of rich people in our world there should not be poverty on the scale in which we have examined. What is poverty? It is a type of cancer that needs to be cured, malnutrition saps energy away from people and as a result they are too weak to provide for themselves and their families they are left weak and helpless, Lack of education keeps people lacking the skills needed to give them a fighting chance of getting out of the poverty trap. Governments of the world have created Goals in an effort to end this travesty, hopefully these goals will be fulfilled and in the next decade we would have done enough to eliminated poverty. 1,529 words 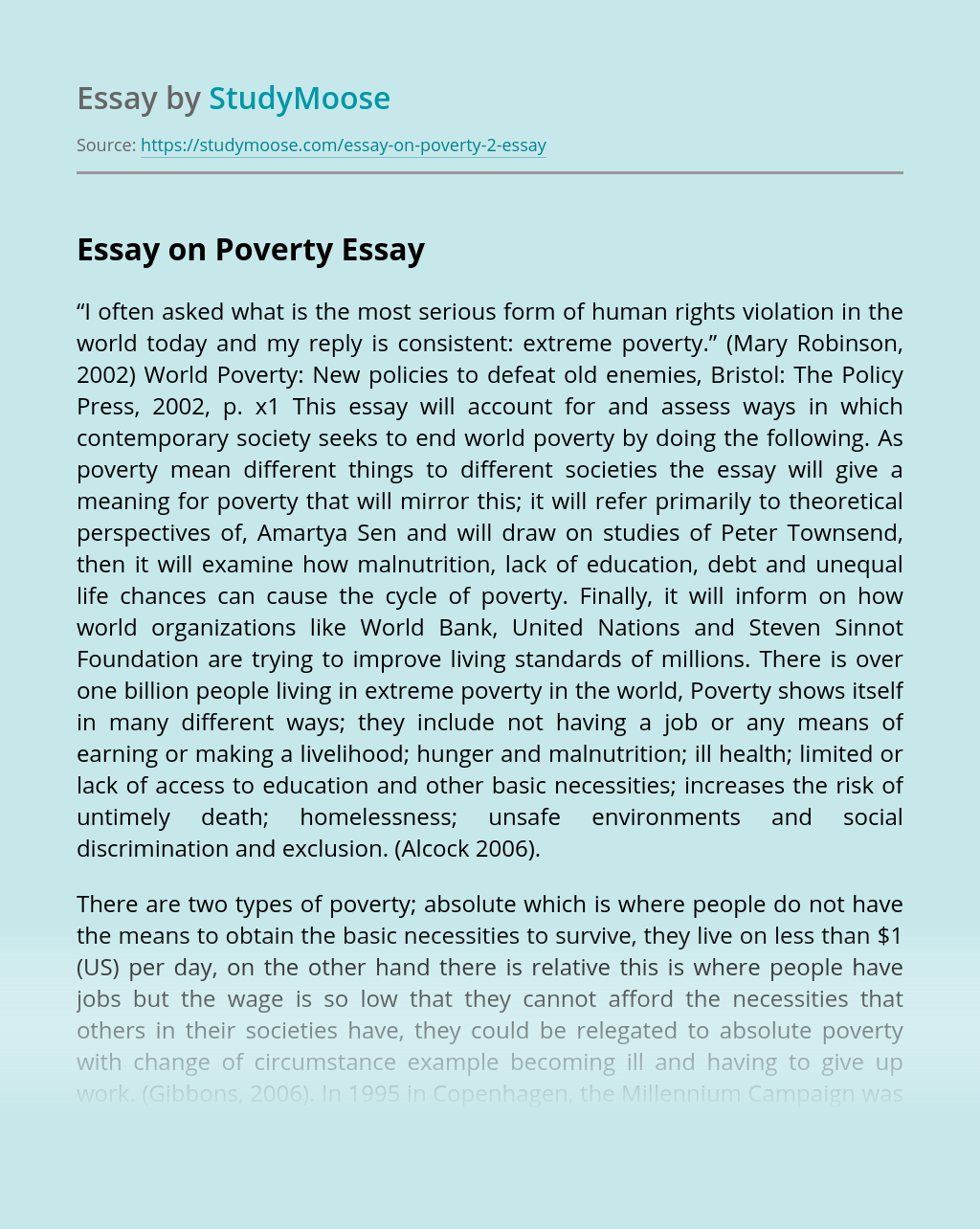 The Effects of Racism on the Health of African Americans

Abstract Studies now show that racism plays a significant role in the development of health and mental issues. Heath effects of racism range from boosting risk of depression, anxiety and anger. These are all factors that can lead to heart disease and other health related issues. Despite the general agreement that racism is wrong there...

The Book of Negroes – Racism

Writing, reading and literature in all its shapes and forms is an efficient way to confine the struggles and hardships that come while fighting for equality. The novel, The Book of Negroes, written by Lawrence Hill deals with the struggles of African Americans and how they deal with prejudice and discrimination within their society. Racism...

Get Essay
Review of Short Story The Closing Door

I find this short story to be somewhat deceiving at first because it feels as though the story is about the generous nature of Agnes Milton. The first several pages the narrator speaks about her hardships in life and the generosity of Agnes; however, the ending is quite unexpected. The narrator was passed from relative...

South Africa is hosting the Soccer World Cup in the year 2010. In order to make it a big success, the federal government is embracing extensive procedures to supply sophisticated centers and refurbish 10 arenas in 9 provinces throughout the nation. The Soccer World Cup began in the year 1930, however no African country had...