In the early 1960’s, the epidemic of juvenile crime began to take shape. The problem of juvenile crime is becoming an increasingly pressing matter in America. Anyone who watches the news on television or reads the newspapers is well aware of the urgency and intensity of America’s juvenile crime problem. Effectively establishing the causes of juvenile crime may help to deter it in the future. A proper solution cannot be executed until the root causes and reasons are exposed. There are undoubtedly many factors contributing to juvenile crime, but the focus should be on those which contribute the most.

Don't use plagiarized sources. Get your custom essay on
“ Poverty and a Lack of Education are Fueling Juvenile Crime ”
Get custom paper
NEW! smart matching with writer

The two factors which come most readily to mind are the extremes of poverty and poor education. Juveniles from poor communities are not even interested in becoming educated because there are not any decent paying jobs for them anyway. By not going to school, these juveniles are not are not developing the proper mental framework with which they can make good choices in life.

The growing numbers of poor communities does not help the situation. It is old news that crime follows poverty. Americans should be concerned that juvenile crime is being fueled by a lack of education and poverty.

Poverty has three basic definitions which are absolute poverty, relative poverty and exclusionary poverty. An absence of the most basic resources such as food, shelter, and clothing constitutes absolute poverty. Relative poverty refers to those people who are poor when compared to the wealthier members of the society. Exclusionary poverty includes people without access to healthcare, proper nutrition, transportation, and opportunities for participating in community life.

The references to poverty in this argument include individuals from all three categories (Ryerse).

The biggest differences between the upper-class and lower-class communities is the quality of education the youths receive and economic security. In upper-class communities juvenile crime exists, but it is far less common and severe than in the impoverished communities. Neighborhoods with a high concentration of poverty are at a much higher risk of having problems such as single-parent families, ineffective parenting, violent schools, high dropout rates, substance abuse, and high unemployment rates (Delbert, 86). Youths growing up in such an environment are experiencing violence daily and are destined to resort to violence themselves.

Poor communities have a tendency to be very unstable because of economic insecurity. Economic insecurity is caused by chronic unemployment. This is especially a problem in the inner-cities where, without jobs, people live impoverished and overcrowded lives (Parcels, 43). Since they are not able to sell their labor, they resort to illegitimate markets such as drugs and prostitution (Parcels, 43). The illegitimate businesses emerge because the communities cannot effectively resist them, and they provide some social organization and economy (Elliot, 86).

Unemployment is not the source of frustration and desperation that eventually leads to violence. A lack of income is, because it forces people into situations that they would choose not to be in. Robbery, prostitution, and drug dealing yield practical and immediate results. These industries naturally organize into street gangs which are known for their violent behavior. If these people were properly educated and lived in an economically secure environment, then there would not be any reasons for them to engage in crime.

Unfortunately, they are currently engaged in enterprises which are dangerous and extremely violent. These enterprises are attractive to the juveniles who are looking for status and a steady income. They are not interested in education or legitimate employment It does not make any sense for a juvenile in a poor community to have much interest in becoming educated in the first place. They know that an education will not help their situation in the long run. The likeliness that a high school diploma will land them a good job is almost nonexistent, and college is completely out of the question without a substantial amount of money.

Therefore, if the juvenile wishes to make something of himself he will naturally find means available to him. By becoming a low level drug dealer he can make a considerable amount of money in a relatively small amount of time. It becomes even more profitable to be a drug dealer in a gang because of the protection a gang can offer. The money, on top of the prestige and respect drug dealers have in poor communities, makes the experience quite rewarding. This is why younger individuals are attracted to the criminal lifestyle.

In the criminal sub-culture violence is not only condoned but encouraged. The methods and details involved are often learned from a parent or older sibling. Because the juveniles parents are poor and undereducated, they are more likely to be engaged in criminal and deviant activity themselves. The children grow up watching their parents struggle to survive and live a criminal lifestyle. The adults, frustrated by their hopeless situation, frequently turn to drugs and alcohol which affects how they deal with their children. The frustration and anger that a juvenile experiences in such a family can easily pour over into other areas of their social life in the form of violence.

The limited availability of resources in poor neighborhoods creates both social isolation and economic stress on families. Parents who have limited problem solving skills, poor impulse control, and a history of violent behavior during adolescence are those at a high risk of child abuse. Frequently, they are young, low-income, single parent, minority women with four or more children in the household. If the fathers are present, they tend to have only a limited education and be part-time employed. Because they have few alternatives and limited social support, they do not have anyone who might provide social controls on their behavior and non-violent alternatives for managing their children (Elliot, 86).

Neither the government, nor any other outside entity seems willing to provide much needed solutions. This is really no surprise considering the current power structure in the United States, which includes the politicians and the elite class, have an interest in keeping the lower classes confused, disorganized, and helpless. This is because of the fear that if the poor class organizes and unites the poor will at once recognize the current power structure is the source of their oppression. Capitalism, by definition, requires an abundance of labor which is it’s foundation. Noam Chomsky, professor at MIT, suggested that America’s two-tiered society with enormous wealth and privilege amidst poverty and suffering was created and sustained with bipartisan agreement.

There are not enough jobs in America, because capitalism does not and never did provide full employment (Parcels 45). Eric Parcels, writer of the New Unionist, believes that “capitalism likes to keep a reserve army of unemployed people to help force wages down (44). The widening gap between the rich and the poor and the hopelessness it creates are two reasons which make the poor angry and frustrated (Hall 124). The young people see drugs, gangs, and anti-social behavior as a way to get back at the system (Hall ). Gus Hall, chair of Communist Party USA, claims “whenever there is severe unemployment and poverty, there is crime, drugs, and violence (125).”

Some people argue that not all poor people are violent and many grow up in poor areas and do not become criminals. This is true, but the point is that growing up in a poor neighborhood increases the likeliness criminal activity will emerge. Others point out that white- collar crime is rampant, but these crimes are not as common or as severe as those committed by the gangs and other violent youth. There are also the questions of overcrowding and media violence. These factors undoubtedly contribute to crime, but they do not have as much influence as poverty coupled with poor education. When trying to solve the problem of juvenile crime most people are quick to suggest increasing law enforcement and creating harsher prison sentences. These solutions will help to a certain extent, but they are treating the effects of juvenile crime instead of the causes.

Some people are proposing that America test Buckminister Fuller’s idea of the negative income tax. This is the idea that a line be drawn somewhere above the poverty line and no one can receive less. The most remarkable aspect of this idea is that it would cost less than the current bureaucratic welfare system. It’s opponents argue that it would increase inflation, but this is not necessarily true if the Gross Nation Product was not exceeded.

Educating and giving money to the poor would not solve America’s crime and violence problems overnight. A more reasonable time frame would be several generations. There is also the idea of investing in a massive adult education program. This might be effective in breaking the cycle in which juveniles are learning bad habits and criminal behavior from their parents. Though it may not be the most effective solution, it does seem to be the most civilized.

America’s juvenile crime problem is not going to fix itself. Realizing that juveniles who grow up uneducated and poverty stricken are prone to engage in crime may lead to the discovery of a viable solution that can be agreed upon. Until then, the problem still lingers and threatens to intensify. By not addressing the situation in a healthy and rational manner, the juveniles are destined to become even more angry and frustrated at the hopelessness of their situation.

It is now clear how poverty and a lack of education are linked to juvenile crime. Juvenile crime will continue to exist as long as the public and the government chooses to ignore it’s relationship to economy and education. It was Gus Hall who said, “crime, like joblessness, is a national disease. When people-any people-lose hope, when poverty and despair is the only view of the future, crime, drugs, and violence are the results (125).”

Poverty and a Lack of Education are Fueling Juvenile Crime. (2016, Jun 22). Retrieved from https://studymoose.com/poverty-and-a-lack-of-education-are-fueling-juvenile-crime-essay 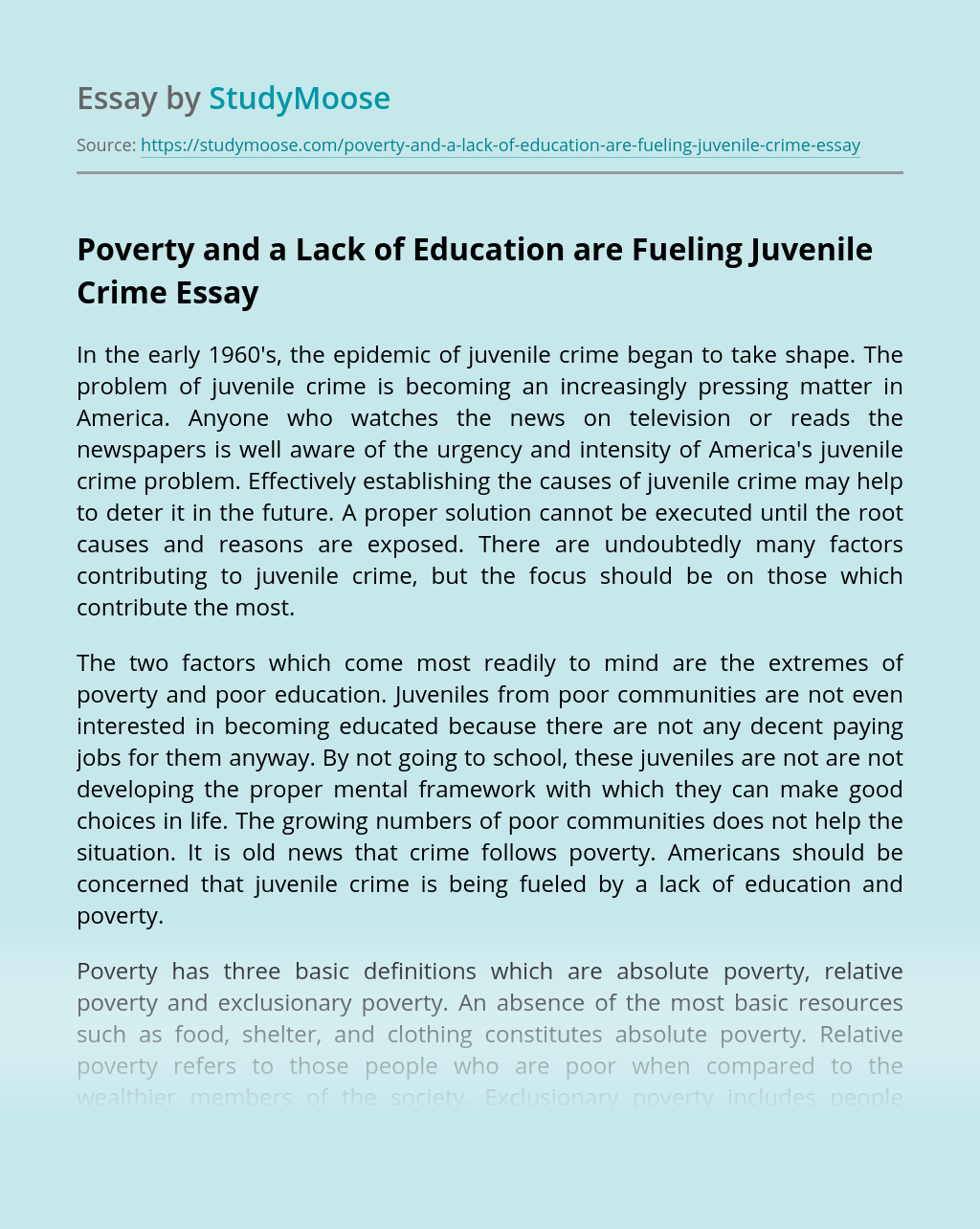